Extraction of the breast border and simultaneously exclusion of pectoral muscle are principal steps for diagnosing of breast cancer based on mammogram data. The objective of propose method is to classify the mediolateral oblique fragment of the pectoral muscle. The extraction of breast region is performed using the multilevel wavelet decomposition of mammogram images. Moreover, artifact suppression and pectoral muscle detection is carried out by morphological operator. The efficient extraction with higher accuracy is validated on the set of 322 digital images taken from MIAS dataset.

Breast cancer is fatal disease of females almost worldwide and every year death rate is increased gradually due to its metastatic sites [1]. Computer-Aided Detection (CAD) setup may establish a significant contribution in the early age detection of tumor cell in women’s breast and may improve their mortality rate [2].

Due to the variations in size, shapes, intensity decomposition, it becomes very difficult to isolate pectoral muscle from breast border line. In this regard, we propose extraction of breast border using mathematical morphology in wavelet domain.

Our paper is defined as follows: In Section 3, proposed procedure and its graphical representation is illustrated. In Section 4, performance assessment is accomplished. In Section 5, we conclude our work.

Most of the existing methods to detect the pectoral muscles are providing less accurate results, usually, mislead the information in case of tumor segmentation accuracy. Therefore, it is required to improve the existing methods for attaining high level of accuracy. A sequential flow of the proposed method is shown in Figure 1. 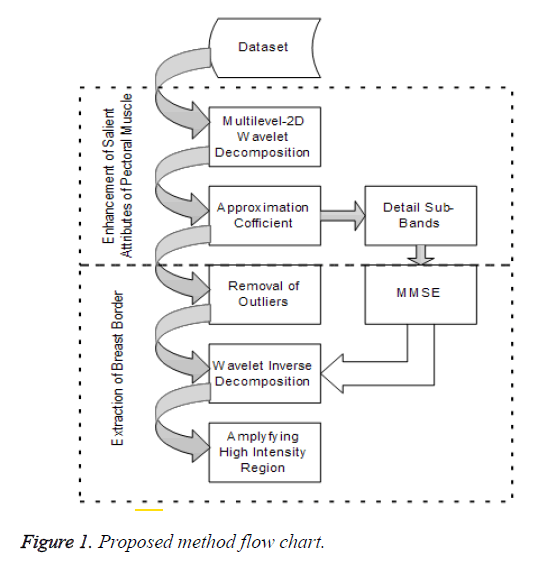 Mammographic images have two parts, one is the visible breast area and the other is background area that may contain radiopaque artifacts, markers, and labels that can be removed by amplifying the high intensity area using a seed point approach. A mammogram before and after removal of these artifacts is displayed in Figure 2. 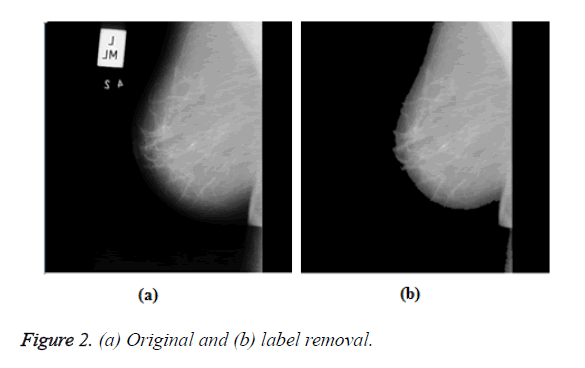 Median filter is used for removing the quantum noise present in mammographic images. Most of the heuristic based noise removal filters blur the given image [16]. Therefore, we use mathematical formulation of the most adopted filter as described in Equation 1.

Where υικ is the output value for location xικ, νικ=ν1, ν2, ν3, ….νΖ, ι,κ are representing the position in a 2D image, m and γ are filtering window indices, where filtering window length is denoted by Z, and ρ denote the Lρ norm. Commonly, ρ=1 corresponds to standard median filtering. The main purpose of this preprocessing is to obtain significant mammograms that further help us to obtain accurate breast profile. We proposed a unique method to for removal of pectoral muscle in order to achieve accurate tumor region.

Pectoral muscle appears as intensity region on mammograms having no significant information about tumor recognition and may cause erroneous pathological decisions. So, removal of pectoral muscle from breast parenchyma is considered important properties of computer aided diagnoses system for accurate tumor segmentation and classification. In this proposed work, filtered mammograms are decomposed in four sub band by using multilevel 2D wavelet decomposition [3,17,18]. One band is approximation scale and other three bands are detailed sub bands. The approximation scale hold out the approximation coefficients and the other three bands preserve horizontal, vertical and diagonal details, respectively. Mathematical functions of wavelet transform can be given as follows

For refining the breast parenchyma from outlier’s contour operation in combination with morphological operators is applied on approximation sub band. Minimum mean squared error (MMSE) [19] is applied on detailed sub bands. Inverse Wavelet decomposition is applied on all four sub bands and amplifying the areas of high intensity and segment them using a seed. The seed is adjusted on the convex hull and erodes the map until it has touched on the edge of the areas to keep, preserving the geometry of breast region. The generation of wavelet coefficients based on two levels is called a dyadic scale which leads to get an efficient and accurate analysis [2,3]. The analysis of any signal β provides the results in form of coefficients Ρ (ω, Υ) as follows:

Let a mammogram be represented by the pixel set ω={ω1, ω2…, ωn} with |ω|=row × col of the matric on which the image is defined. The performance is evaluated on total 322 mammograms (μ) based on MIAS database. In subjective method, visual check by an experienced radiologist is often adopted to measure the performance evaluation of proposed work (Table 1).

We propose moderate segregation of the pectoral muscle in well-known dataset of MIAS images. For analysis purpose of mammogram images, the required pectoral muscle boundaries drawn on manual basis by an expert radiologist. For validation and comparison, we use these manual drawn boundaries images as a ground truth. The test results of the proposed method are promising and very much useful for primary level detection of breast cancer.

We would like to thank Mr. Ayaz (radiologist) from St. Jude Children's Research Hospital, Memphis, US for providing us the ground truth data for segmenting the breast mass to evaluate the improvement of our proposed method.