Extraction, isolation, and characterization of aflatoxins from different herbs and spices in saudi arabia.

Aflatoxins are the most important group of mycotoxins, produced by different Aspergillus species, according to International Agency for Research on Cancer aflatoxins has been found to be responsible cause immunotoxic, carcinogenic, and mutagenic effects on human beings the samples of herbs and spices has been collected from Riyadh, Tabuk and Hail region of Saudi Arabia. All the samples were screened for Isolation of fungal strains, and extraction and quantification of Aflatoxins was done using HPLC system using water/ acetonitrile/methanol mobile phase. Aflatoxins were calculated as ppb (µg/kg) .The highest concentration of aflatoxin G1 was observed as 1.003 (ppb) in the herb Origanum majorana in the Riyadh region, in the herb Zingiber ofﬁcinale which is observed as 1.024 (ppb) and B1 found to be 0.131 and 0.421 (ppb) in the Tabuk and hail region and fungal species Aspergillus flavus has been isolated, moreover, spice Piper nigrum contaminated with highest concentration of Aflatoxin G2 6.460 (ppb) and in Zingiber ofﬁcinale concentration of Aflatoxin G1 was observed as 0.740 (ppb) in the Hail region. As the aflatoxins are reported to be possess nephrotoxic, genotoxic, teratogenic, carcinogenic, and cytotoxic effects in the humans. To conclude, the herbs and spices should be monitored under safety and precautionary guidelines during its production, processing and marketing to prevent with contamination of toxigenic fungal strains and aflatoxins as it may leads to serious health threats and illness.

There are more than 20 forms of Aflatoxins (AFs) and their derivatives found in nature, but only four have been proven to be harmful to humans and livestock: B1, B2, G1, and G2 [1-4]. Furanocoumarins are generated by many Aspergillus strains, with Aspergillus flavus, Aspergillus parasiticus, Aspergillus nomius, and Aspergillus pseudotamarii being the most common [5]. The presence of the lactone and difuran rings is primarily responsible for immunotoxic, carcinogenic, and mutagenic effects [6].

The International Agency for Research on Cancer (IARC) has classed aflatoxins, such as AFB1, AFB2, AFG1, AFG2, and AFM1, as GROUP 1 carcinogens in humans [7,8]. Nucleotide pairing was disrupted by AFs and metabolites produced by hepatic CYP enzymes, which can result in genetic alterations, large-scale chromosomal abnormalities, or even DNA strand breaks [9].

The present study has been aimed to analyze the based evidence of presence of aflatoxin in the herbs and spices must be considered seriously to combat Aflatoxicosis and mycotoxicosis.

Random samples of unpacked selected herbs and spices were collected from different regions Riyadh, Hail, and Tabuk retail markets in Saudi Arabia. All samples were collected in sterile polyethylene bags, transferred to the laboratory, and stored at 4°C until use.

A total of 27 samples, which included nine types of commonly used and regularly available herbs and spices, were collected from each city (Table 1).

Table 1. List of herb and spice samples included in the study.

Isolation of fungal strains from samples

Isolation of fungi from herbs and spices was done using the standard dilution plate method. For this, 10 g of the ground sample was added to 90 mL of sterile saline solution (0.85%) in a sterile 500 mL Erlenmeyer flask and homogenized thoroughly on an electric shaker at constant speed for 15 min. The mixture was allowed to stand for 10 min.

Tenfold serial dilutions (1:10) were prepared, and 1 mL aliquots of three suitable dilutions of the resulting medicinal plant suspension were used to inoculate duplicate Petri dishes, each containing 15 mL PDA with 0.4 g/mL chloramphenicol to suppress bacterial growth, using the spread plate method. The plates were then incubated at 25°C for four to seven days (an interval in which most fungal species grow). After growth, identification was done using lactophenol cotton blue-tease mount technique and microscopic observation was done for identification and characterization of fungal strains.

For the extraction, 12.5 g (m0) of the homogenized test sample was weighed in the blender jar, and then 5 g of sodium chloride and 125 mL (V1) of extraction solvent were added. It was homogenized with a mixer for 2 min at high speed. The blending was monitored to ensure that the blending time and speed did not have a negative influence on the extraction efficiency. The mixture was filtered through a fluted filter paper (V1), and then 15 mL (V2) of the filtrate was pipetted into a conical flask of appropriate size with a glass stopper. Then, 30 mL of water was added, the stopper inserted, and the solution mixed. Before starting affinity column chromatography, the diluted extract was filtered through a glass microfiber filter paper. The filtrate (V3) was refiltered until it was clear and then used immediately in the clean-up steps. Centrifugation was also used to obtain a clear solution.

The IAC was prepared, and the clean-up procedure was performed in accordance with the manufacturer’s instructions. A 15 mL (V4) aliquot of the second filtrate (V3) was added to the solvent reservoir of the IAC and allowed to pass through the separation column, which was then washed with 20 mL of distilled water. Slight pressure was applied to the top of the column without drying the column or discarding the eluate. AFB1, AFB2, AFG1, and AFG2 were eluted by adding 1 mL of methanol and then 1 mL of water. The eluate was collected in 2 mL volumetric flasks (made up to the mark) and then transferred to amber color vials for HPLC.

AF quantification was performed according to ISO 16050:2003 (E) using the Infinitely HPLC system (1290 infinity series) with a fluorescence detector, pump, and C18 column (3 mm × 10 mm × 2.6 µm, Kinetex) with post-column derivatization. The analysis was carried out at a flow rate of 1 mL/min using water/acetonitrile/methanol (6.5:1.75:1.75) as the mobile phase. A volume of 75 μL of extract was injected, and AFB1, AFB2, AFG1, and AFG2 were detected by their retention times and quantified by comparing peak areas to those of the standard. The analysis excitation and emission wavelengths were 365 nm and 435 nm, respectively.

The fungal strain isolation and aflatoxin contamination has been analyzed in three different regions of Saudi Arabia- Riyadh, Tabuk and Hail. In the Riyadh region in piper nigrum spice sample fungal species Aspergillus parasiticus in Origanum majorana herb Aspergillus flavus has been isolated and aflatoxin G2 concentration 5.591 (ppb) and G1 1.003 (ppb) had been detected (Table 3).

Table 3. Fungal contamination in the Riyadh medicinal herbs and spices.

In the Tabuk region in piper nigrum, Cuminum cyminum, Origanum majorana and Zingiber ofﬁcinale spices and herb fungal species such as Aspergillus parasiticus and Aspergillus flavus has been isolated and the aflatoxin concentration detected was aflatoxin G1-0.0512 in Cuminum cyminum, in Zingiber ofﬁcinale B1-0.131 and G1-1.024 ppb was detected (Table 4).

Table 4. Fungal contamination in the Tabuk medicinal herbs and spices.

Table 5. Fungal contamination in the Hail medicinal herbs and spices.

The quantification of aflatoxin has been performed according to ISO 16050:2003 (E) and the retention time of the aflatoxins test samples were obtained (Figures 1-3). 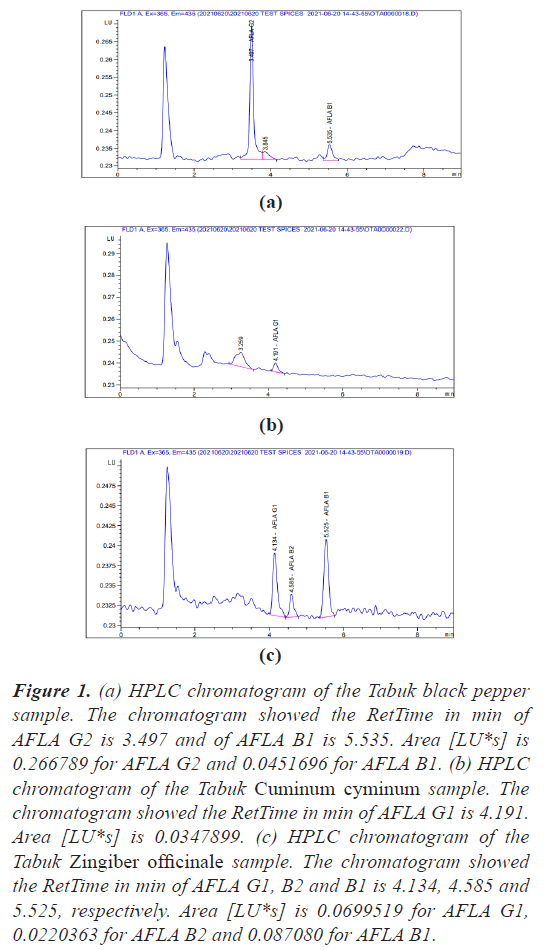 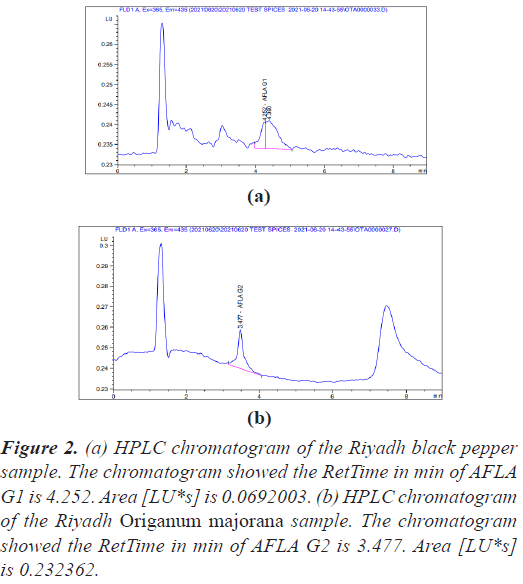 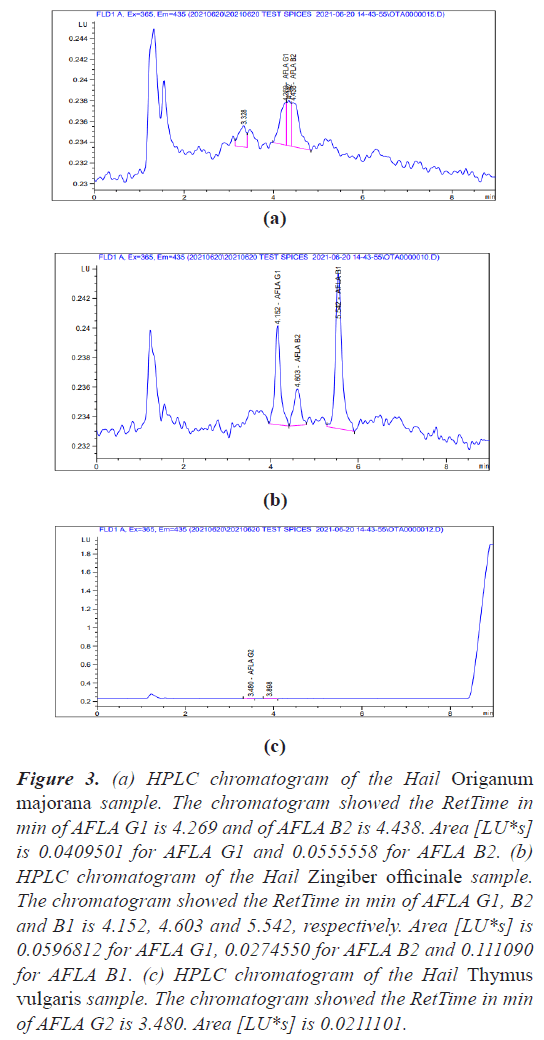 As due to demand in consumption of natural drugs and the possibility of access to products without adequate storage conditions have made the use of herbs and spices a public health problem, as they may be contaminated with fungal strains and aflatoxins. Moreover, contamination of mycotoxigenic fungal species would affect the quality and production of food, medicinal herbs and spices, which may cause economical loss of producers, marketers, and processors and health threats [10,11]. AFs have been identified as important toxins affecting humans and livestock, and the IARC has classified AFB1 as carcinogenic in humans, that is, as a GROUP 1 carcinogen [7,8].

Aflatoxin producing Aspergillus species were cosmopolitan in nature such as, soil, food products, dust, organic debris, and decomposing matter, as interactions between fungi species and host environment leads to growth of fungal strains and toxin [12], Aspergillus flavus and Aspergillus parasiticus are common contaminants in agriculture [13].

As reported in the previous studies aflatoxin was found to be the prevalent contaminant as mycotoxins, which mainly contains four groups, aflatoxin B1, aflatoxin B2, aflatoxin G1, and aflatoxin G2, aflatoxins found to cause negative effects on the organs, especially liver. Studies have shown that exposure to aflatoxin can lead to primary hepatocellular carcinoma. In addition, aflatoxins may result in an acute toxicity at higher concentrationAFB1 [12,14].

In our present Aflatoxin B1 has been found to be 0.421 (ppb) in spice Zingiber ofﬁcinale in the hail region, whereas in Tabuk region it is observed 0.131 (ppb) and the fungal species Aspergillus flavus has been isolated. As reported in the later studies, aflatoxin B1 was known cause hepatotoxic effects and has been classified under Group 1 carcinogens involved in hepatocellular carcinoma [15,16], as AFB1 metabolized by Cytochrome P450 enzyme system (CYPs) in the liver and forms a potent carcinogen derivative Aflatoxin B1-8,9-epoxide (AFB0) [4], not only liver toxification it is also involved in the immune system impairment which leads to immunotoxicity [17] and causes malnutrition and growth impairment in the children exposed to AFB1 and in developing countries reported kwashiorkor disease with high concentration of AFB1 in the sera samples [18,19].

The Aflatoxin G1 was observed in highest concentration 1.003 (ppb) in the herb Origanum majorana in the Riyadh region, and in the herb Zingiber ofﬁcinale in the Tabuk region which is observed as 1.024 (ppb) and the aflatoxin producing fungal specie Aspergillus flavus has been isolated.

As reported in the later studies, mycotoxins can have nephrotoxic, genotoxic, teratogenic, carcinogenic, and cytotoxic properties but are also capable of affecting tumor development due to their antineoplastic potential [20].

The present research has been conducted to evaluate the presence of aflatoxin and to isolate the aflatoxin producing strains from the selected herbs and spices. As very less or no information is available from Saudi Arabia on the presence of aflatoxin in most of the herbs and spices, however, environmental conditions have a great influence on fungal growth, and most of the samples investigated in this study were contaminated with toxigenic as well as non-toxigenic fungi. The average summer temperature in Tabuk and Hail is 30-40°C and in Riyadh is 35-45°C, and humidity is low in all the cities, between 10 and 25%. Herbs and spices are subjected to various processes before being reached to the consumer. Improper conditions during planting, harvesting, post-harvesting, processing, storage, transport, and marketing may affect their quality.

Medicinal herbs and spices have been commonly used in most households for thousands of years. The safety of herbs and spices is closely related to how they are managed at every stage of processing and production. This study gives a clear picture of the fungal species and aflatoxins contamination in herbs and spices commercially available in Riyadh, Tabuk, and Hail. Most of the medicinal herb and spice samples tested in this study were found to be contaminated with fungal strains and aflatoxins, among all the fungal strains isolated, Aspergillus species was found to be dominant genus encountered. Contamination of these products with toxigenic fungi poses serious health threats, since their presence can cause ill effects rather than improve the quality of life.

HSA and AOF: Supervising the research work, designing methodology, analyzing the data and writing the results, manuscript revising and editing. HSA, SA, NA and YA: conceived the idea of work, supervising the bench work and planning and designing the complete research project work. HSA and SAS: performed experimental work and compiled the data generated. HSA and AM: manuscript writing, compiling and analyzing the data, manuscript revising and editing.

The authors acknowledge the support of grant from the ‘‘Research Center of the Female Scientific and Medical Colleges”, Deanship of Scientific Research, King Saud University for supporting this research project, and also special thanks to all the authors for their constant support and sincere efforts to carry out the present research work.

Authors have no conflict of interest. 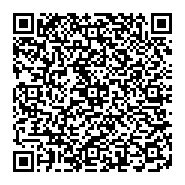