Vascular endothelial growth factor (VEGF) can induce neovascularization. We recent found that the number of osteoclasts was enhanced of VEGF with the application of mechanical force for experimental tooth movement. In this study, the VEGF was detected in osteoblasts and periodontal tissues on the tension and pressure side of the alveolar bone. Moreover, the neovascularization was significantly increased in the tooth movement by magnet groups compared with the control. These results suggest that VEGF, highly expressed by mechanical stimuli, enhances the number of neovascularizations as the paracrine factor is accelerated by magnetic force.

Tooth movement in orthodontic treatment is achieved by a combination of mechanical and physiologic forces acting on the teeth and their supporting structures to effect the biologic changes that cause teeth to move through bone. Othodontic tooth movement is achieved by a repeated process of alveolar bone resorption on the pressure side and new bone formation on the tension side [1,2]. Originally, the orthodontic forces to teeth were the orthodontic wires. Orthodontics with the magnet was tried by various researchers in the 1980's [3,4]. Generally, orthodontic treatment with the magnet is few pains in teeth. As the reason, it was also reported that osteoblasts produce VEGF, and it is well-understood from these findings that experimental tooth movement is a useful in vivo model for investigating the expression and role of VEGF in the periodontal tissues with active remodeling [5,6,7].

Vascular endothelial growth factor (VEGF) is the most important and essential mediator for angiogenesis [8]. It was reported that VEGF expression was detected in the vascularization process of developing embryos [9], and the pathophysiologic process of inflammation and wound healing [10]. The specific receptors for VEGF, two receptor tyosine kinases, fms-like tyrosine kinase (Flt-1) and fetal liver kinase (Flk-1), have been identified [11,12,13,14]. Our recent study [15] demonstrated that osteoclasts markedly cxpressed Flt-1, and that recombinant human (rh)VEGF (AQ) induced many osteoclasts in op/op mice.

We conducted this study to investigate the expression of VEGF and neovascularization within periodontal tissues during experimental tooth movement using an immunohistochemical approach.

C57BL/6J mice, each weighing about 15 g, were obtained from Jackson Laboratory (Bar Harbor, ME, USA) for use in this experiment. All animals wrere treated under ethical regulations for animal experiments, defined by the Ethics Committee, Hiroshima University Faculty of Dentistry.

The animals were fed a granular diet (CA1; Japan Clea, Tokyo, Japan) to prevent the influence of masticatory forces on the incisors. They were divided into three groups and an experimental appliance for tooth movement exerted an initial force of 1.0g applied in the distal direction (Figure 1A and B). 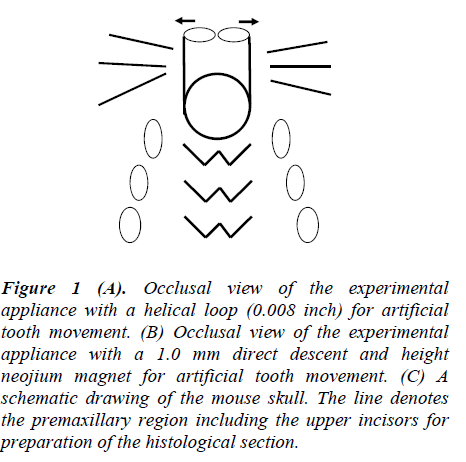 First, 30-day-old mice were divided into three groups. The first group served as the controls (n=5). The second group, upper Incisors were the initial experimental tooth movement using a wire (n=5). In the third group, upper Incisor were beginning of experimental tooth movement using magnets (n=5). An experimental wire appliance with a helical loop was made of 0.008-inch round stainless steel wire (3M Unitek, Monrovia, CA, USA). The wire appliance was bonded onto the lateral surfaces of the upper incisors (Figure 1A) In the present study, new magnetized orthodontic brackets were designed. The magnet works to move teeth distally and is not merely a mechanical force. It is well adapted to the biophysical system of tooth and bone interrelationships. The experimental magnet appliance was a 1.0 mm direct descent and height neojium magnet (Hitachi metals, Tokyo, Japan). The magnetic flux density of this magnet was a 150 m tesla. The magnet appliance was bonded onto the frontal surfaces of the upper incisors (Figure 1B). The force magnitudes were calibrated by a tension gauge (Shinpo Cprp., Tokyo, Japan) to exert an initial force of 1.0 g applied in the distal direction. Experimental tooth movement was continued for 14 days in the three groups. The distances between the left and right appliances’ tips, bonded onto the upper incisors, were measured every three days on dorsovetral cephalograms. A rat-and-mouse cephalometric X-ray apparatus (Asashi Roentgen Ind. Co., Kyoto, Japan) was used at 20-25 kV and 6mA with an exposure time of 30. Sec on Kodak Dental Ultra-speed film (Eastman Kodak Co., Rochester, NY, USA). We measured the width of the midpalatal suture every three days on the frontal sections (n=5) and subtracted it from the distance of tooth movement according to a previous study [16].

The mice were killed under general anesthesia with sodium pentobarbital, fixed in 4% paraformaldehyde, and rinsed in distilled water. The specimens were then decalcified in 14% EDTA (pH 7.4) for 14 days and embedded in paraffin. The premaxillary bone, including the upper incisors, were cut into frontal sections of 7μm thickness (Figure 1C). The expression of VEGF on the tension and pressure were examined on sections immunohistochemically stained with a rabbit anti-mouse VEGF polyclonal antibody (LAB VISION, Vector Laboratories, Burlingame. CA, USA), and counterstained with methyl green. Normal rabbit IgG (Santa Cruz Biotechnology, Santa Cruz, CA, USA) was used as the control for the polyclonal antibody. The neovascularization number in a 100 X 3600μm2 area of the PDL space on the tension and pressure side of the incisor was counted in 5 sections at 35μm intervals for each specimen.

Figure 1 and 2 shows the expression of VEGF within the periodontal tissues 10 days after the experimental tooth movement was initiated.

Many osteoblasts were detected on the tension and pressure side in the PDL space. In the osteoblasts, VEGF was highly expressed, as noted by the intense immunostaining with the VEGF antibody (Figure 2 and 3).

Meanwhile, no immunoreactivity was detected in the negative control (Figure 2 and 3) 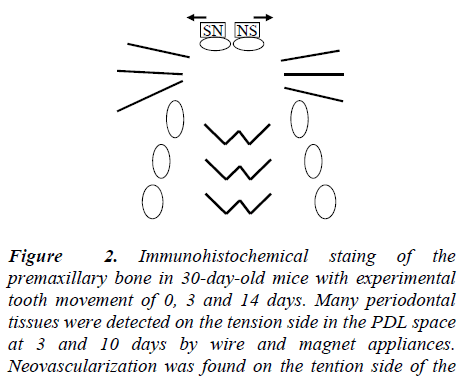 Figure 2:Immunohistochemical staing of the premaxillary bone in 30-day-old mice with experimental tooth movement of 0, 3 and 14 days. Many periodontal tissues were detected on the tension side in the PDL space at 3 and 10 days by wire and magnet appliances. Neovascularization was found on the tention side of the Orthodontic treatment and VEGF. 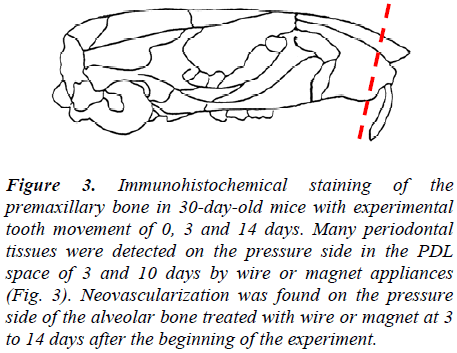 Figure 3: Immunohistochemical staining of the premaxillary bone in 30-day-old mice with experimental tooth movement of 0, 3 and 14 days. Many periodontal tissues were detected on the pressure side in the PDL space of 3 and 10 days by wire or magnet appliances (Fig. 3). Neovascularization was found on the pressure side of the alveolar bone treated with wire or magnet at 3 to 14 days after the beginning of the experiment.

Changes in the Neovascularization Number and the Amount of Tooth Movement

Changes in the amount of tooth movement every three days (Figure 4) and changes in the numbers of neovascularization on days 3, 7, 9 and 14 are shown in Figure 5. 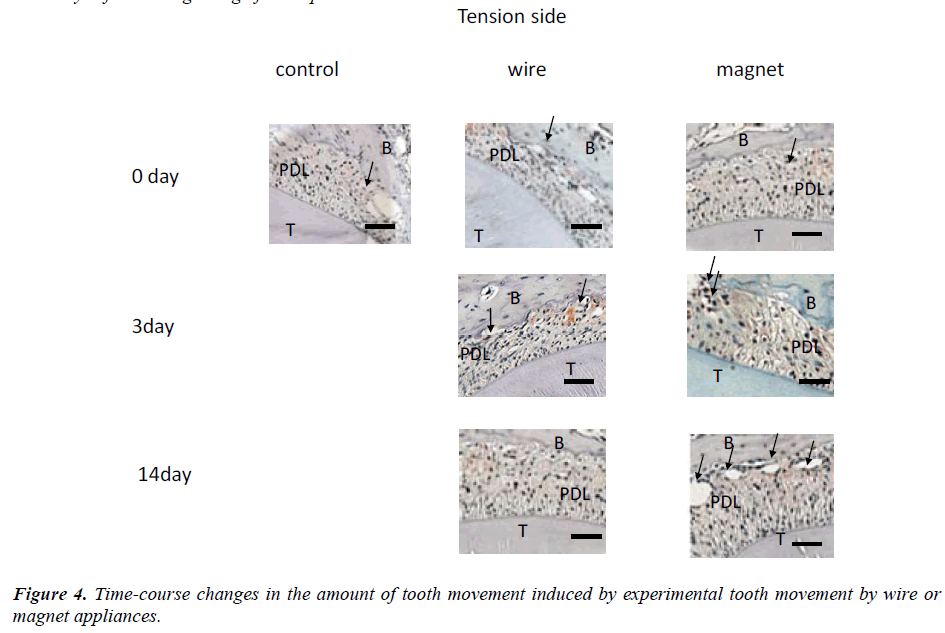 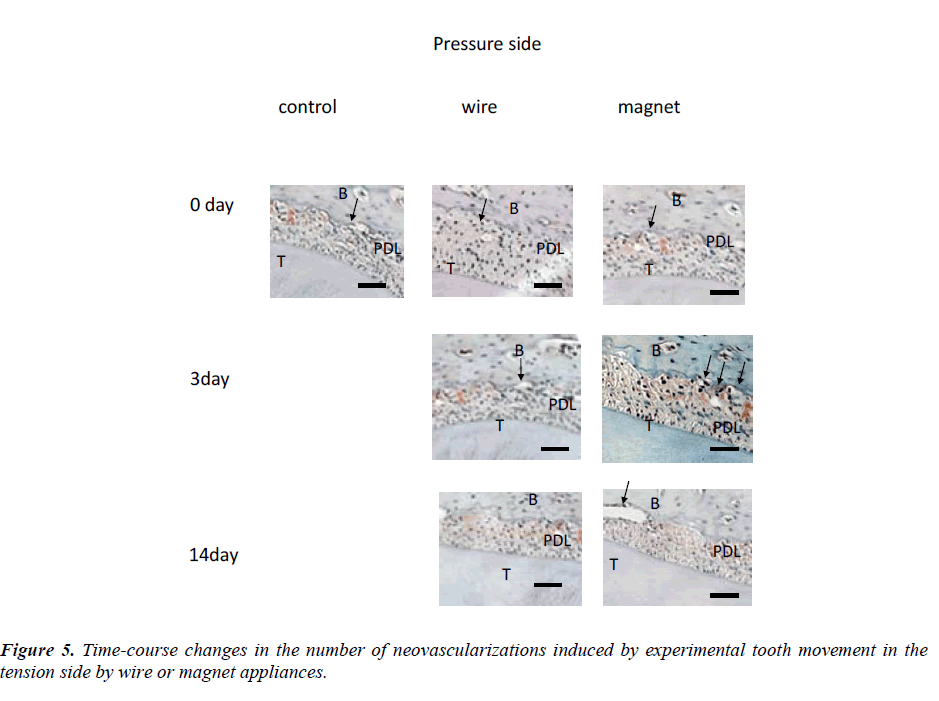 Figure 5: Time-course changes in the number of neovascularizations induced by experimental tooth movement in the tension side by wire or magnet appliances.

The same result was also obtained on the pressure side (Figure 6). 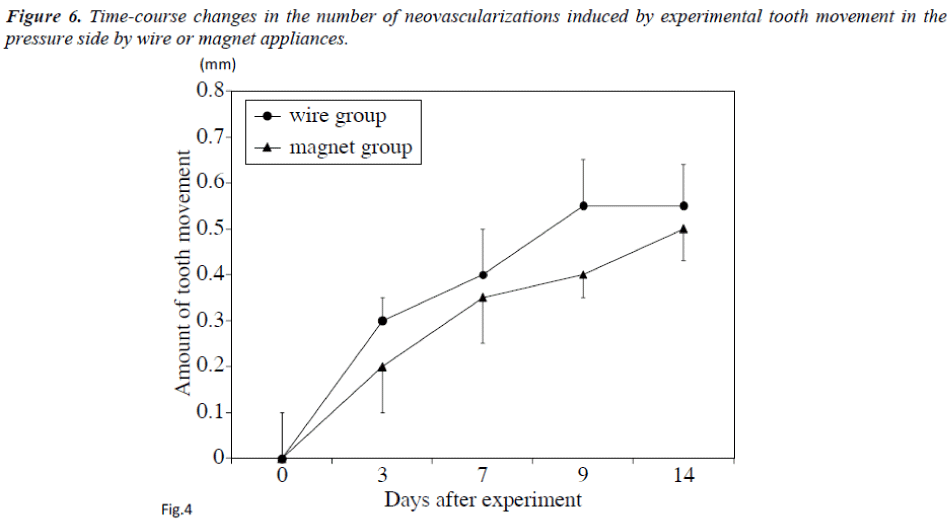 Figure 6: Time-course changes in the number of neovascularizations induced by experimental tooth movement in the pressure side by wire or magnet appliances..

VEGF, which isalso known as vascular permeability factor [17], induces angiogenesis in several physiological and pathological es. VEGF is a crucial regulator of angiogenesis, and its mRNA is expressed in various tissues, such as the lung and heart [18,19]. Previous studies showed that EGF mRNA was expressed in osteoblasts in in vitro experiments [20], suggesting that osteoblastic activity may be closely related to angiogenesis, which is the main function of VEGF. VEGF has various biological functions, such as vascular permeability and migration of human monocytes [17,21,22]. In this study, many periodontal tissues were detected on the tension and pressure side in the PDL space 3 days after the beginning of the experiment, and VEGF was highly expressed in these periodontal tissues. Thus, it is assumed that VEGF expression in periodontal tissues was promoted by mechanical stimuli to the periodontium, suggesting that VEGF may participate in the regulation of periodontal tissue metabolism and wound healing during orthodontic tooth movement.

Very recently, we demonstrated that local administration of rhVEGF enhanced the number of osteoclasts during experimental tooth movement, and the number of nuclei per osteoclast in rhVEGF-injected mice was significantly higher than in control mice [23]. Several experimental approaches have been attempted to induce more efficient tooth movement by increasing the number of osteoclasts and resultant bone resorption [24,25]. We speculate that several elements play a role in orthodontic tooth movement. In this study, it was emphasized that a combination of orthodontic stimuli by magnets accelerated differentiation of periodontal tissues, and it is apparent that these cells function to increase neovascularization. From the past research, the blood vessel rebirth of the dentistry orthodontic therapy with a magnet was not observed. In this study, pains in teeth by the orthodontics treatment might relate to VEGF. Therefore, natural induction of VEGF by magnetism may be effective for clinical orthodontic treatment by enhancing the rate of orthodontic tooth movement.

The authors showed that the natural induction of VEGF by magnetism may be effective for clinical orthodontic treatment by enhancing the rate of orthodontic tooth movement. Current study results suggest that VEGF, highly expressed by mechanical stimuli, enhances the number of neovascularizations as the paracrine factor is accelerated by magnetic force.

The authors are grateful to the staff of the Research Facility of Laboratory Animal Science, Hiroshima University School of Medicine, for their assistance.

This study was conducted in part with the support of a Grant-in-aid (15791213) from the Ministry of Education, Science, Sports and Culture in Japan.