Bronchopulmonary Dysplasia (BPD) is a chronic lung disease of premature infants and usually induces severe complications that cause pulmonary dysfunction and dysplasia [1,2]. With the development of mechanical ventilation and application of exogenous pulmonary surfactant, the survival rate of premature infants has had an obvious increase; however, the incidence rate of BPD has also increased resulting in a reduction of the survival rate and quality of life [3-5]. In this study, postnatal rats were exposed to hyperoxia for obtaining acute lung injury rat models, which showed that the pathological changes complied with the occurrence and development of BPD in very premature infants. Although rats born at term have structurally immature lungs, they are functionally mature and require no intubation, ventilation, or treatment with synthetic surfactant. The last stage of pulmonary development in rats is also called alveolarization and starts 3 days after birth, which is at approximately the same time as humans with 26 to 28 weeks of gestation. In this stage, the lungs are not well developed and hyperoxia easily causes lung injury. Hyperoxic gas above 95% is the common concentration used to study BPD-like lung injury. Short-term hyperoxia could lead to an acute lung injury resulting in impaired alveolarization with fewer and enlarged alveolar air spaces [6,7]. Studies have demonstrated that Vascular Endothelial Growth Factor (VEGF) is a key regulator of pulmonary vascular growth and maintenance throughout the embryonic, fetal, and postnatal periods [8-10]. Angiopoietin (Ang) is a vascular growth factor that promotes the interaction between endothelial and adventitial cells and aids in vascular maturity [11]. However, the dynamic expression of VEGF and Ang-1 and their role in acute lung injury remain unclear. In this study, a lung injury rat model was developed using hyperoxiaexposed postnatal rats in order to measure the expression levels of VEGF and Ang-1 in pulmonary tissues and evaluating the effects on pulmonary development; thereby, providing further information on BPD.

Four pregnant Sprague-Dawley rats that were purchased from the experimental animal center of Guangzhou Medical University gave birth to 55 new-born rats. Forty-eight 3-dayold Sprague-Dawley rats, of either sex, were randomly divided into a control and hyperoxia group. Each group had 24 rats. Oxygen boxes were set at 3 different pores, including the entering pore, vent pore, and testing pore. Oxygen flow was set to 6 L/min and oxygen concentration to >95%; the levels were monitored using an oxygen concentration determinator in the box. In the hyperoxia group, postnatal rats and their mothers were fed in the oxygen boxes for 7 days. Meanwhile, the controls were placed in standard rat cages. All the maternal rats were fed with standard rat pellets and water, which were added every day. Postnatal rats were nursed and their growth and vitality were observed [12]. This study was carried out in strict accordance with the recommendations in the Guide for the Care and Use of Laboratory Animals of the National Institutes of Health. The animal use protocol has been reviewed and approved by the Institutional Animal Care and Use Committee (IACUC) of Guangzhou Medical University.

After deep anesthesia with an intraperitoneal injection of 10% chloral hydrate on days 1, 3, and 7 in 8 random rats from each group, the rats were put down by cervical dislocation and their lungs were separated. The entire portions of the left lungs were immediately rinsed in ice-cold PBS and snap-frozen in liquid nitrogen for real-time PCR and Western blotting; the entire portions of the right lungs were immediately fixed in situ by intratracheal instillation of 4% paraformaldehyde for pathological sections. The morphological changes of the lung tissues were examined by light microscopy.

Five micro sections were stained with Hematoxylin and Eosin (HE) and examined. The morphological changes in structures in the hyperoxia group were observed under the light microscope and compared to that of the control group.

Real-time PCR was used to determine the mRNA expression levels of VEGF and Ang-1. Total RNA of lung tissues were extracted with Trizol (Invitrogen Company, USA) and TaKaRa reverse transcription kits (TaKaRa Company, Japan) were used to synthesize cDNA for PCR amplification. The primer sequences were as follows: 5’- GAGTATATCTTCAAGCCGTCCTGT-3’ (VEGF sense), 5’- ATCTGCATAGTGACGTTGCTCTC-3’(VEGF anti-sense), with a 118 bp amplified product; 5’- GGATCGAGCTGATGGACTG-3’ (Ang-1 sense), 5’- TCAAGCTGCTCTGTTTGCCT-3’ (Ang-1 anti-sense), with a 135 bp amplified product; 5’- ACGGTCAGGTCATCACTATC-3’ (β-actin sense), 5’- TGCCACAGGATTCCATACC-3’ (β-actin anti-sense), with a 109 bp amplified product. The PCR conditions were as follows: an initial melting step at 95°C for 5 min, followed by 40 cycles of denaturation at 95°C for 5 s, an appropriate annealing temperature of 52°C for 20 s, with a final extension step at 72°C for 5 min. Subsequently the transcripts were checked using a 2% agarose gel for gel electrophoresis and stained with Ethidium Bromide (EB). The results were observed under an ultraviolet lamp. cDNA was synthesized to establish the reaction system and perform real-time PCR. Ct values were used to calculate the relative amount of mRNA expression levels using a standard curve. The ratio of objective gene to internal reference gene represented the relative mRNA expression levels.

Statistical analysis was performed using the SPSS 16.0 software (http://www.spss.com or SPSS Inc.). Measured data was presented as mean ± SD (x? ± s). The results from the control group on day 1 were used as the reference and the internal reference gene data were adjusted. Data were tested for normal distribution. A two-sample t-test and one-way ANOVA were used to compare data between the 2 groups. P<0.05 was considered to be statistically significant.

Postnatal rat model and the morphological changes of the lung tissues

In the control group, postnatal rats grew well with weight gains of 2-3 g every day and a 1.0 cm to 1.5 cm increase per day in length; however, in the hyperoxia group, with the longer time of exposure to hyperoxia, the postnatal rats had thinner bodies, less vitality, blunted responses, and slower increases in weight and length. Two postnatal rats died on day 5 and 6, respectively, in the hyperoxia group; the total mortality rate was 8.33%. In the control group, low power light microscopy (X100) showed no obvious pathological changes with clear alveolar structures that were similar in size, a small alveolar cavity without inflammatory exudates, and a thick alveolar septum. In the hyperoxia group, the lung tissues became disordered with the longer exposure to hyperoxia and the alveolar wall became thinner. Furthermore, the following findings indicated that development and differentiation was impaired in the pulmonary tissues: alveolar simplification, reduction in the number of alveoli, some alveolar fusion, an increase in alveolar volume, reduction in alveolar area, obviously enlarged alveolar cavity diameter, some inflammatory exudates, thin alveolar septum, and an increased number of fibroblast cells and collagen-like substances. High power light microscopy (X400) found that the alveolar wall was entirely without obvious cast-off cells in the control group, but in the hyperoxia group, red cells, microphages and cast-off lung endothelial cells were seen in the alveolus. In addition, the alveolar septum became thin and interstitial cells increased, and the small vessels were expanded and congested (Figure 1). 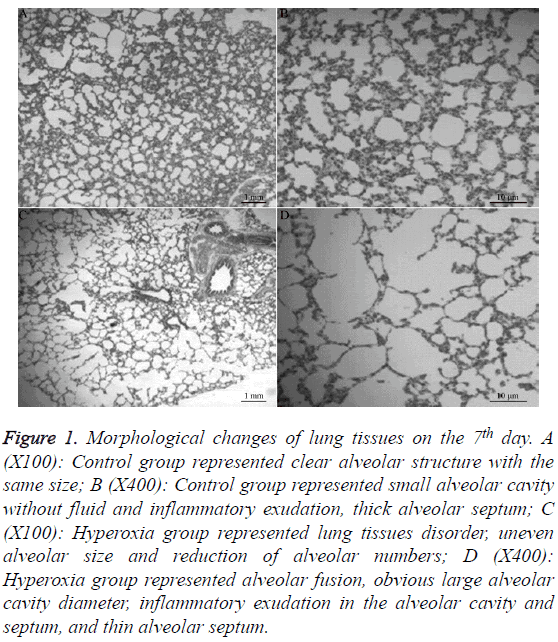 The VEGF and Ang-1 mRNA expression levels in lung tissues

The VEGF and Ang-1 protein expression levels in lung tissues

The normal progress of alveolarization throughout the development of the lungs is highly dependent on angiogenesis. VEGF, which mainly promotes formation of primitive vascular networks, is a powerful and important regulating factor for pulmonary vascular growth and maintenance during the entire fetal period and in the postnatal period [17-19]. In addition, Ang-1 is part of a family of vascular growth factors that play a role in embryonic and postnatal angiogenesis and promotes the formation of mature vascular networks that have space structures [20,21]. Here, our results showed that the mRNA and protein expression levels of VEGF and Ang-1 were slightly down-regulated, but not significantly on days 1, 3, and 7 in the control group. The alveolarization phase includes bulk alveolarization and continued alveolarization, which focuses on alveolar formation and airspace volume, respectively [22]. However, the mRNA and protein expression levels of VEGF and Ang-1 were significantly lower on day 7 in the hyperoxia group than in the control group, which indicated that the mRNA and protein levels of VEGF and Ang-1 in lung tissue were obviously down-regulated in BPD-like lung injury induced by hyperoxia. Moreover, it might result in the degradation of alveolar structures and lung vascular dysplasia. Therefore, we speculated that VEGF and Ang-1 were important regulators for pulmonary development, but the exact mechanisms require further studies [23], which would be beneficial towards new clinical treatments of BPD. To determine whether we can regulate the expression of VEGF and Ang-1 to improve the alveolar and microvascular development in lung injury, more clinical practice and future research is needed. At this time, we were not able to ultimately improve the pathogenic structures of BPD; however, some researchers have found that the transplantation of mesenchymal stem cells in BPD animal models could alleviate the damage to lung tissue and promote lung development and the regenerative repair of lung tissues.

VEGF and Ang-1 are important regulators of alveolar and lung vascular development, which is involved in the pathogenesis of lung injury and pulmonary development. In addition, it is significant for further research into the pathogenic mechanism of and treatment for Bronchopulmonary Dysplasia (BPD).

This study was supported by Medical Science and Technology Program of Guangzhou city (20141A011031). 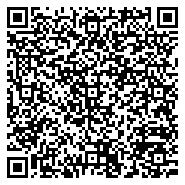