The Matrix Gla Protein (MGP) is a member of the Extracellular Matrix (ECM) family of proteins that play an important role in the development of tooth and bone and in the calcification of the tooth extracellular matrix, and are regulated by the activity of metal ions, proteins, and other cytokines [1-5]. The vitamin K-dependent MGP gene was initially discovered in cow bones and was subsequently discovered to exist in the teeth, heart, lung, cartilage, and other tissues [3,6-8]. It was not known whether the MGP gene was involved in the process and mechanism of tooth germ development. In the mouse MGP gene-deficient model, calcified plaques were found in mouse vital arteries, which affected vascular elasticity leading to blood vessel rupture [9]. Non-functioning of the MGP gene can cause calcification of the extracellular matrix and promote cartilage calcification. These studies indicated that the MGP gene was an inhibitor of vascular and cartilage calcification and played a role in the prevention of atherosclerosis and cartilage calcification [10]. In this experiment, the MGP gene/expression profiles of first molar mandibular follicle tissues of CD1 mice at embryonic day 17 (E17) and two days after birth (PN2) were analysed and compared using the enrichment analysis software DAVID [11]. Analysis of the MGP gene was performed to determine whether it was involved in the process of tooth germ tissue development and whether and expression of the gene changed at different developmental stages of tooth root development in CD1 mice. The aims of the study were to lay the foundation for further studying the mechanism of the MGP gene in tooth germ development in CD1 mouse, and to add to the database of the genes involved in tooth developmental regulation.

CD1 mice were provided by Vital River Experimental Animal Technical Co., LTD (Beijing). This study was carried out in strict accordance with the recommendations in the Guide for the Care and Use of Laboratory Animals of the National Institutes of Health. The protocol used has been reviewed and approved by the Institutional Animal Care and Use Committee (IACUC) of the 306th Hospital of PLA (Chinese People's Liberation Army).

Mouse mandibular tissues were taken during embryonic 17 day (E17) and two days after birth (PN2) in accordance with the experimental time points and were rinsed in DEPC-PBS (Invitrogen, USA). The centrifuge tubes containing the samples were filled with isopentane (Sigma, USA), put into a liquid nitrogen box for 6-8 s, taken out, transferred into Optimal Cutting Temperature (OCT) embedding medium (Shandon, UK), and finally stored in liquid nitrogen.

The embedded tissue blocks were roughly cut into 40 μm sections after roughly visualizing the tooth form and were then cut into two 20-25 μm fine sections. Tooth germs and dental follicular tissues were chosen under a light microscope, covered with Laser Metal Deposition (LMD) coating, sliced and collected. Ten slices of 20-25 μm thickness were collected. The coated tissue sections were pre-treated with 100% ethanol (Merck KGaA, Germany) for 5-10 s and after drying, were reserved for laser microdissection (LMD USA).

The prepared samples were read in the Agilent microarray scanner to obtain hybridization signal data. Quantitative conversion of the data was performed using the signal extraction software from Agilent. All data were normalized, and two-fold differentially expressed gene selection was done by Agilent GeneSpringGX 7.3 software.

Gene enrichment analysis was performed using the DAVID site (http://david.abcc.ncifc/gov/home). The “functional annotation” was selected in the analysis interface and gene lists were uploaded. Next, the Agilent probe identifier number was selected, the list type was set to the uploaded gene lists and the job was submitted and analysed. 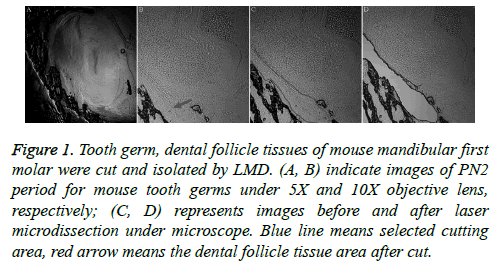 The quality control of RNA extracted from tissue samples was performed on RNA 6000 microfluidic chips used in the 2100 Bioanalyzer from Agilent (United States). The ribosomal RNA 28S/18S ratio (28S/18S Ratio) and the RNA integrity number (RIN) were used as standards. The 28S/18S Ratio in E17 group was 2.01 and the RIN was 7.2. The 28S/18S Ratio in PN2 group was 2.05 and the RIN was 7.9 indicating that RNA was pure. The 18S and 28S RNA bands can be clearly seen in the sample gel electrophoresis picture (Figure 2), suggesting that RNA was not contaminated and can be used in microarray experiments. 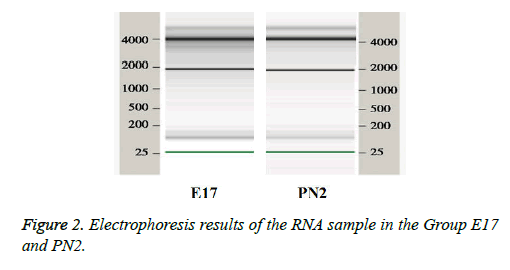 Figure 2: Electrophoresis results of the RNA sample in the Group E17 and PN2.

The mouse whole genome chip purchased from Agilent (United States) contains more than 42,000 probe sequences. The E17 and PN2 dental follicular tissues examined in this study were compared, and 36000 credible gene results were obtained. The two sets of microarray data were compared and analysed to determine the differential expression of the MGP gene in the tissue samples. The criterion used for the expressed genes was a ratio of ≥ 2.

The two-fold upregulated and downregulated genes in the results obtained from the mouse whole genome chip analysis were input to the DAVID online platform, the results showed several enriched genes were gotten.

As shown in Table 2 the MGP gene was one of the genes down-regulated more than two-fold in the comparison of the tissues from the E17 and PN2 time periods using the subdirectories of extracellular matrix sequences.

The electropherogram of PCR products obtained for the MGP gene in the samples from the E17 and PN2 time-periods is shown in Figure 3A. The ratios of the intensity of the target gene to the reference gene, Glceraldehyde-3-Phosphate Dehydrogenase (GAPDH), were measured by gel image analyser (Figure 3B). This ratio was obtained as a correction factor (Table 3) to compare with the normalized value of the gene expression obtained in the chip experiment for tissues from the E17 and PN2 periods to verify expression trends. The results show that MGP gene microarray validated results were consistent with the observed trends in the E17 and PN2 periods confirming that the MGP gene expression was higher during the E17 time period compared to expression during the PN2 time period. 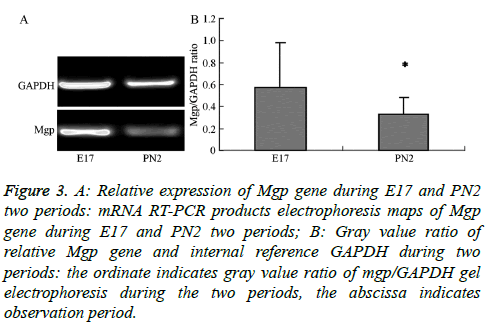 In this study, dental sac’s development derived from mesenchymal tissue of the embryonic neural crest origin. In the 15 days of mouse embryos period (E15), also namely tooth germ development went into the cap stage, ecto-mesenchymal cells divided into two kinds of cells: one is the future form of odontoblasts and pulp cells, dental papilla cells eventually become the dentine-pulp complex; Another is for future differentiation of bone cells, periodontal membrane cells into osteoblast and dental sac cells. From the morphological point, 17 d (E17, embryonic period), dental papilla cells divided into odontoblasts, and the root development would be end after the birth. What factors lead to the different differentiation between two tissues originated from the neural crest tissue from E17? In the early stage of root development, if there had genes differential expression sooner than the morphological changes lead to different differentiation of these two tissues? In the different stage of the same tissue, which genes differential expression leads to tissue specificity? In order to answer these questions, we selected the E17 and PN2, used LMD cut specific dental sac tissue, lay the foundation for subsequent difference genetic screening. Dental follicle tissues were isolated from mouse mandibular first molar at two different time periods (E17 and PN2) to make frozen sections and perform post-production laser cutting. This method can accurately get samples which experiments needed. The results in this study show that laser microdissection technology can enhance the cutting accuracy and efficiency of dental follicle tissues, provide RNA sample of high quality for making gene chips, and lay the foundation for subsequently comparing differential gene expression in different phases of the tissue development and differentiation process using a highthroughput platform.

The advantages of using microarray experiments are automation and high-throughput. The labeling, hybridization and other processes of many gene probes can be done in a single experiment, and the results are automatically analysed by software, which was fast and convenient. But the method is also susceptible to a variety of pitfalls including a high rate of false-positives. To validate results from microarray experiments, Northern blot or in situ hybridization (in-situ) or other methods are needed to verify the differential expression of the screened genes. PCR technology is one of the most simple and effective experimental means for verification of microarray results. The results of this study were verified by PCR, suggesting that the trends of MGP gene expression in the E17 and PN2 time periods were consistent were consistent with the microarray data showing a decrease in expression during the E17 to PN2 timeframe. This finding reminder us to find if MGP gene participate in mediation tooth germ differentiation. Under normal circumstances differentiation of precursor cells in the regeneration process are triggered in instances of tooth root development or tissue repair by a cellular “micro-environment” (niche), which consists of Extracellular Matrix (ECM) and matrix growth factors [5,17]. ECM is a multi-dimensional structure that contains collagen, fibronectin, elastin, and other non-collagenous proteins. Its main function is promoting cell adhesion, cell shape extension, tissue expansion, and cytoskeleton formation. A type of “stem cell” secreted and synthesized by the extracellular matrix may play important roles in altering local microenvironment, and triggering differentiation of the next generation "stem cell" [18]. Thus, more and more studies are examining the gene expression and distribution of ECM family. The MGP gene is associated with typical function in the extracellular matrix and has synergism with osteocalcin (OC) [19]. Research performed in other laboratories used a 2.3 kb central promoter to expressed the MGP gene in osteoblasts, odontoblasts and cementoblasts of transgenic mice and showed that bone mineralization was inhibited [20,21]. In Colla1-MGP transgenic mice, it was found that mineralization appeared to be missing in the root dentin and cementum, and was accompanied by a decrease in alveolar bone density [22,23]. Clinically, patients with osteoporosis, usually with MGP gene activation. Many scholars regard the MGP gene as the purpose therapy gene of osteoporosis; thought that it was involved in the pathogenesis of osteoporosis, especially in postmenopausal osteoporosis disease, mgp expression was activated. Mgp was also be an important regulatory factor of endochondral bone formation and vascular calcification, was a kind of important mineral salt deposition inhibitor, its abnormal expression closely related to extracellular matrix abnormal calcification of tissues such as cartilage and artery [24,25]. In this experiment, the results showed that MGP gene expression at two days after birth was significantly decreased compared with that on embryonic 17. The results of this study are consistent with the results of Murshed et al. [6], who suggested that MGP inhibited bone mineralization and reduced bone density. This change may be related with continuous development of mouse tooth germ after birth, and the increase in the degree of mineralization; that is, MGP expression is reduced and accompanied with an increase in the degree of mineralization of the tooth. This phenomenon may be related to differences between the external environment after the birth of the embryo and the embryonic internal environment resulting in the change of MGP gene expression.

In summary, the development of tooth germ tissue is completed in a unified regulation of a complex molecular regulatory network. The expression of the MGP gene was examined in dental tissues taken from mouse embryos (E17) and compared with dental tissues taken after birth (PN2). The change may be related to increased mineralization of developing tooth germ after mice was born. The results of this experiment showed that the MGP gene might play a role in the developmental process of mouse tooth germ tissues involved in tooth development in mice. Also this result may relate to the internal environment differences between embryonic period and after born, which leading to the change of MGP gene’s expression. Further studies will be needed to understand the regulation mechanism and variation in expression of the MGP gene, add group for exact division of time to find more ways and gene mediating tooth development.

This study was supported by the State key laboratory of aerospace medicine foundation and application of open issue (Differentiation gene research of periodontal ligament osteoblastic differentiation under simulated weightlessness based on microarray data screening of rabbits, SMFA14K03) and the Capital health development research project of Beijing, China (Grant No.2014-4-5051).