Purpose: Rutin has been widely used in clinic for treatment of cardiovascular diseases in China. But rutin was rarely used in prevention and treatment of cancer. This study investigated the expression of NF-κB and p38 under intervention of rutin in lung cancer.

Methods: In this experiment, cells were divided into control group, cisplatin group, and rutin groups (low, middle and high). The MTT, flow cytometry, Western blot and immunofluorescence staining methods were used to examine cell cycle and the expression of NF-κB and P38, respectively.

Results: Rutin could regulate the cell cycle. In addition, rutin reduced the expression of NF-κB and P38.

Conclusion: These novel findings indicate that rutin inhibits NF-κB and P38 activity and regulates the development of lung cancer.

Lung cancer is the second leading cause of death in the worldwide, it is a serious threat to human health [1,2]. With the increase of environmental pollution and smoking, the incidence and mortality of lung cancer also showed a trend of getting younger [3]. Therefore, prevention of lung cancer has become an urgent problem.

The activation of p38 MAPK can directly influence gene transcription, as a growing number of transcription factors are known to be direct targets of p38 [4]. Important target of the p38 MAPK include STAT1, NF-κB and c/EBPs [5]. According to reports show that the activation of NF-κB can induce the apoptosis of endothelial cells, which mainly involved C-myc, TNF-α and IL-1 gene [6]. Recent studies have found that NF- κB pathway play an important role in many-diseases [7].

Rutin as an old drug has been used for many years. Rutin is a phenolic compound and flavonoid glycoside that is found in flowers and fruits as a major source. Rutin can be broadly extracted from nature sources, including buckwheat, oranges, grapes, lemons, limes, peaches and berries. It has been widely recognized for many patients, including diabetic cardiomyopathy. The compound has been reported to possess antitumor functions [8]. Rutin may inhibit NF-κB expression and regulate the development of lung cancer. In this study, the effect of rutin on inhibiting NF-κB and p38 expression was investigated by analysing the development of lung cancer.

Human lung cancer cells were cultured in 50 cm2 plates (1 × 105 cells//well). Cells were released by digestion with trypsin and harvested. After centrifugation, the cells were washed twice with precooled PBS and fixed with precooled 70% ethanol overnight at 4°C. Then the cells were re-suspended in PBS containing 10% foetal bovine serum, filtered through a 400 mesh sieve, and stained with propidium iodide solution (PI, 50 μg/ml, 100 μg/ml RNase in PBS) at 37°C in the dark for 30 minutes. Finally, the cells were analysed for the cell cycle phase by FACScan (Beckman Coulter, Pasa-dena, CA, USA).

Cells were homogenized in RIPA buffer (Sigma). Total protein concentration of the homogenates was measured with the BCA reagent. Equal amounts of protein were subjected to SDS-PAGE and transferred to polyvinylidene difluoride membranes by electroblotting. After blocking, the membranes were incubated with antibodies directed against human NF-κB, and β-actin.

The cells were seeded in cell crawling on the sheet until the addition was complete conditioned with 4% paraformaldehyde for 15 min. Cells were washed in PBS 3 times. The cell dropped 1: 200 antibody concentrations at 4°C overnight, washed in PBS three times for 5 min, added into 1: 500 concentration of fluorescence-labelled secondary antibody for 2 h. The cells applied DAPI, p38 and NF-κB staining solution for 5 min. the slices were mounted with 10% glycerol and observed with a microscope.

All the data obtained from at least three independent experiments were shown as the mean ± SEM. Statistical comparison was made with Students P-Values of less than 0.05 were considered to be of statistical significance. Statistical analysis of the data was performed via SPSS for Windows Version 11 (SPSS, Chicago, II, USA). *p <0.05 cisplatin and rutin vs. control.

Table 1: Effect of rutin on cell cycle of lung cancer. 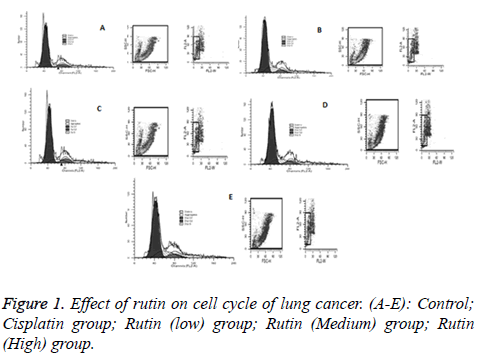 As shown in Figure 2, the experimental results showed that these were uniform chromatin, large nucleus, integrity of the nuclear envelope. Cell morphology has been significantly improved by adding rutin; the results indicated that rutin had a role of regulation on tumor cell morphology. 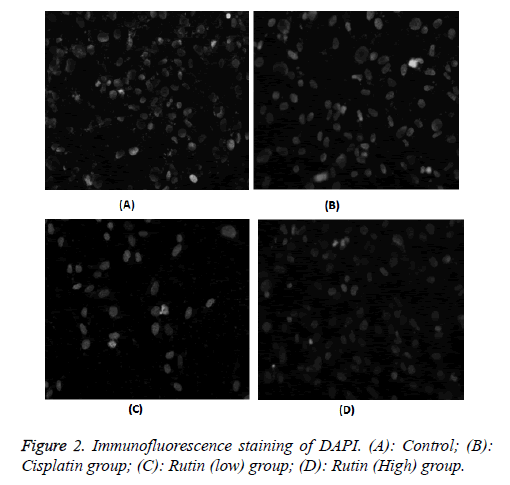 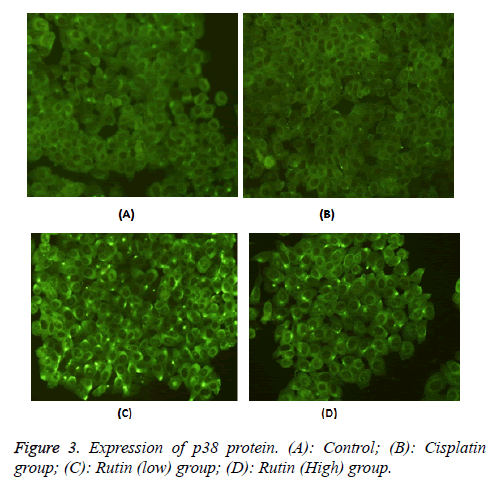 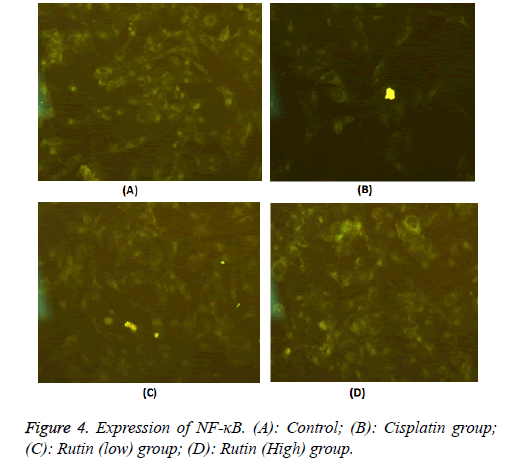 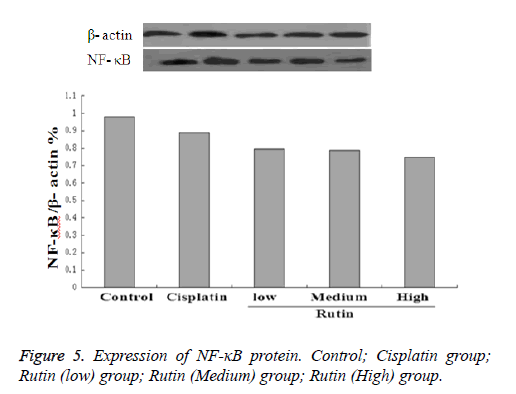 Lung cancer is one of the morbidity and mortality of the fastest growing [9]. Its incidence continues to increase at a rate of approximately 0.5% per year, and the number of cancer deaths caused by this disease expected to rise to 50% by 2020 [10]. In spite recent progress in diagnosis and multimodality therapies for lung, the prognosis still remain unsatisfactory with 5 year survival rates of less than 15% [11]. They highlight the fact that new strategies based on molecular mechanisms are highly required for lung cancer treatment. Cell Proliferation is a journal devoted to studies into all aspects of cell proliferation and differentiation in normal and abnormal states. In this expression, the results showed Rutin promoted the proliferation of lung cancer cells at 48 h, these results indicated that rutin might inhibit to the lung cancer cells. In addition, different concentrations of rutin could regulate the cell cycle and promote the apoptosis of lung cancer. It is further suggesting that rutin can inhibit the effect on the development of lung cancer cells in vitro.

NF-κB is a transcription factor that regulates the expression of a large number of genes including those involved in inflammation. NF-κB also plays an essential role in innate immune response and many signalling pathways are associated with NF-κB [12-16]. NF-κB belongs to downstream signalling molecule of p38 MAPK. NF-κB has five subtypes: P65, P50, P52, Rel B and c-Rel, different subtypes can be combined with each other and form different dimers; the most common is the p65/p50 [17]. NF-κB activation can modulate the corresponding target genes, including cytokines, chemokines, and cell adhesion molecule expression, thereby regulating cell proliferation, migration and apoptosis [18]. In this expression, the expression of NF-κB and p38 decreased in rutin group (p<0.05). These results indicate that NF-κB and p38 play an important role in lung cancer. In addition, rutin can regulate the expression of NF-κB and p38, and thus to inhibit the development of lung cancer.

The authors gratefully acknowledge the assistance of College of Pharmacy.

This study was supported by the Science and Technology Department of Jilin Province (Grant no. 20140312002ZG).