Expression and functions of microRNA-139 in osteosarcoma

Osteosarcoma (OS), derived from the primitive bone-forming mesenchymal cells in the long bones, is the leading cause of cancer-related deaths in adolescents and children. MiRcroRNA-139 (miR-139) has been reported to be abnormally expressed and play important roles in several cancer types. However, the expression pattern, detailed biological roles and associated molecular mechanisms of miR-139 in OS have remained to be fully elucidated. This study showed that miR-139 expression was downregulated in OS tissues and cell lines. Upregulation of miR-139 significantly inhibited cell proliferation and invasion in OS. Bioinformatics analysis predicted that ROCK1 is a potential target of miR-139. Luciferase reporter assay demonstrated that miR-139 can directly interact with the 3’-untranslated region of ROCK1. RT-qPCR and Western blotting analysis demonstrated that miR-139 had regulatory effects on endogenous ROCK1 expression in OS. Furthermore, ROCK1 knockdown significantly produced effects similar to those induced by miR-139 overexpression in OS cells. Therefore, the miR-139/ROCK1 axis may be a potential target for novel potential therapeutic strategies for treatment of OS.

Osteosarcoma (OS), derived from primitive bone-forming mesenchymal cells in long bones, is the leading cause of cancer-related deaths in adolescents and children [1]. Current major treatments for patients with OS include surgical resection, chemotherapy and radiotherapy [2]. Despite great efforts regarding treatments of OS, the prognosis of this disease remains poor mainly because of recurrence and metastasis [3]. The 5 y overall survival rates are 60%-70% and less than 30% for patients with OS at locally advanced stage and patients who present with metastatic disease, respectively [4]. Therefore, the molecular mechanisms underlying OS formation and progression must be elucidated to develop novel treatment regimens for patients with this disease.

MicroRNAs (miRNAs) are a large family of noncoding, endogenous and short RNA molecules with approximately 19-25 nucleotides in length [5]. MiRNAs negatively regulate gene expression by directly binding to the 3’-Untranslated Regions (UTRs) of their corresponding genes, leading to cleavage and repressed translation of their target mRNAs [6]. Thus far, more than 1,000 miRNAs have been identified in the human genome; these miRNAs may regulate the expression of approximately 30% of all protein-coding genes [7]. A number of evidence indicated that miRNAs are frequently aberrantly expressed in various types of cancer, including OS [8]. Deregulated miRNAs participate in the regulation of tumourigenesis and tumour development through regulating a large number of biological processes, including cell proliferation, cell cycle, apoptosis, invasion, angiogenesis and metastasis [9]. Hence, miRNAs may serve as potential therapeutic targets for anticancer therapy.

MiR-139 has been reported to be abnormally expressed and play important roles in several types of cancer. However, the expression pattern, detailed biological roles and associated molecular mechanisms of miR-139 in OS remain to be fully elucidated. Therefore, this study aims to detect the expression level of miR-139 in OS and investigate its effects on OS as well as its underlying molecular mechanisms.

This research was approved by the Ethics Committee of Renmin Hospital of Wuhan University. In addition, written informed consent was obtained from all participator. A total of 23 primary OS tissues and corresponding adjacent normal tissues were collected at Renmin Hospital of Wuhan University. None of these OS patients had been treated with radiation therapy or chemotherapy before surgery. All tissue specimens were snap-frozen in liquid nitrogen and stored at -80°C until further use.

Transfected cells were collected 24 h post-transfection and seeded into 96-well plates at a density of 3 × 103 cells in each well. After incubation at 37°C for 0, 24, 48 or 72 h, 20 μl of MTT reagent (5 mg/ml; Sigma-Aldrich; Merck KGaA, Darmstadt, Germany) was added into each well and incubated at 37°C for an additional 4 h. Afterwards, 150 μl of dimethyl sulfoxide was added to each well and incubated at 37°C for another 10 min. Finally, absorbance at 490 nm was examined using a microplate reader (Bio-Rad Laboratories, Inc., Hercules, CA, USA). Each assay was performed in triplicate and repeated three times.

Cell invasion assay was conducted to evaluate cell invasion ability by using Transwell chambers coated with Matrigel (BD Biosciences, San Jose, CA, USA). A total of 1 × 105 transfected cells were suspended in 200 μl of FBS-free RPMI-1640 medium and seeded in the upper chamber. The lower chamber was filled with 500 μl of RPMI-1640 medium containing 20% FBS. After incubation at 37°C for 24 h, noninvading cells were removed carefully by using cotton swabs. The invaded cells were fixed with 100% methanol, stained with 0.5% crystal violet, washed with PBS and dried in air. Five fields were randomly selected, and the number of invaded cells was counted under an inverted microscope (X200; Olympus, Tokyo, Japan). The experiments were performed in triplicate.

Data are shown as the mean ± standard deviation. The statistical difference between two groups was assessed by using student’s t-test or one-way ANOVA. P value less than 0.05 was considered statistically significant.

MiR-139 expression is downregulated in OS tissues and cell lines

RT-qPCR analysis was performed to determine whether miR-139 is differentially expressed in OS. MiR-139 expression was detected in 23 paired OS tissues and adjacent normal tissues. The results showed that miR-139 was significantly downregulated in OS tissues compared with that in adjacent normal tissues (P<0.05, Figure 1A). Moreover, the expression levels of miR-139 in human normal osteoblasts (hFOB1.19) and three OS cell lines (U2OS, Saos-2 and MG-63) were examined using RT-qPCR analysis. As shown in Figure 1B, miR-139 expression was lower in all three OS cell lines than that in hFOB1.19. Hence, miR-139 may play important roles in OS initiation and progression. 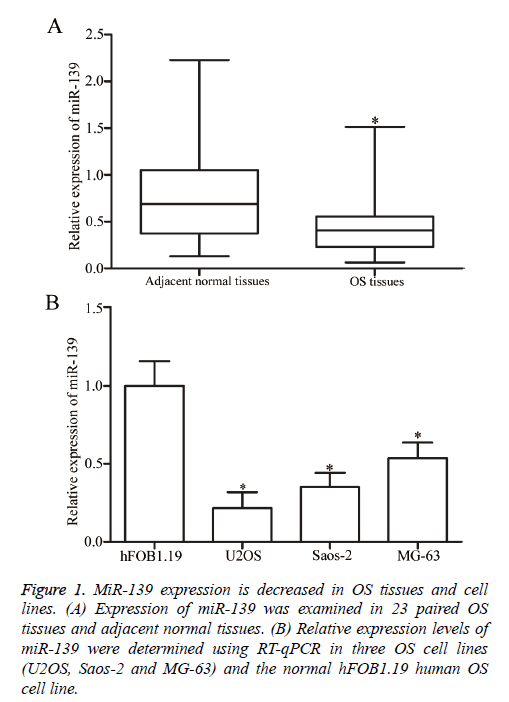 MiR-139 inhibits the proliferation and invasion of OS cells 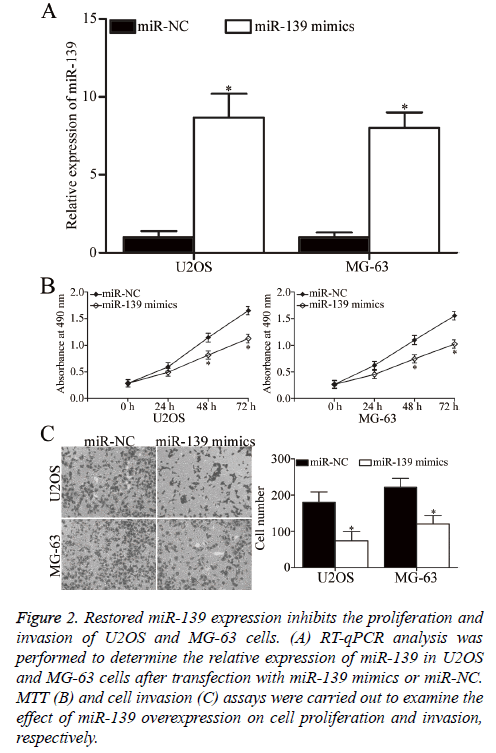 Figure 2: Restored miR-139 expression inhibits the proliferation and invasion of U2OS and MG-63 cells. (A) RT-qPCR analysis was performed to determine the relative expression of miR-139 in U2OS and MG-63 cells after transfection with miR-139 mimics or miR-NC. MTT (B) and cell invasion (C) assays were carried out to examine the effect of miR-139 overexpression on cell proliferation and invasion, respectively.

Bioinformatics analysis was performed to predict the potential targets and study the mechanism underlying the tumoursuppressive roles of miR-139 in OS. ROCK1 was predicted as a target of miR-139 and was selected for further confirmation (Figure 3A). Luciferase reporter assay was conducted to determine whether miR-139 could directly interact with the 3’- UTR of miR-139. HEK293T cells were cotransfected with miR-139 mimics or miR-NC and pMIR-ROCK1-3’-UTR Wt or pMIR-ROCK1-3’-UTR Mut. As shown in Figure 3B, miR-139 overexpression significantly decreased the luciferase activity of pMIR-ROCK1-3’-UTR Wt, but not that of pMIRROCK1- 3’-UTR Mut, in HEK293T cells (P<0.05). Finally, RT-qPCR and Western blotting analysis were conducted to investigate whether miR-139 exerts regulatory effects on endogenous ROCK1 expression in OS. As presented in Figures 3C and 3D, the upregulation of miR-139 reduced ROCK1 expression in U2OS and MG-63 cells at the mRNA (P<0.05) and protein (P<0.05) levels. Overall, ZEB1 is a direct target of miR-139 in OS. 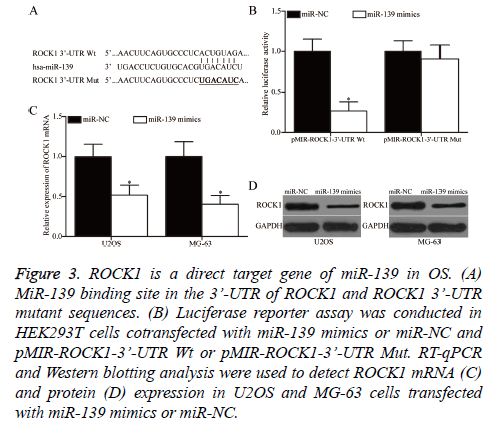 Figure 3: ROCK1 is a direct target gene of miR-139 in OS. (A) MiR-139 binding site in the 3’-UTR of ROCK1 and ROCK1 3’-UTR mutant sequences. (B) Luciferase reporter assay was conducted in HEK293T cells cotransfected with miR-139 mimics or miR-NC and pMIR-ROCK1-3’-UTR Wt or pMIR-ROCK1-3’-UTR Mut. RT-qPCR and Western blotting analysis were used to detect ROCK1 mRNA (C) and protein (D) expression in U2OS and MG-63 cells transfected with miR-139 mimics or miR-NC. 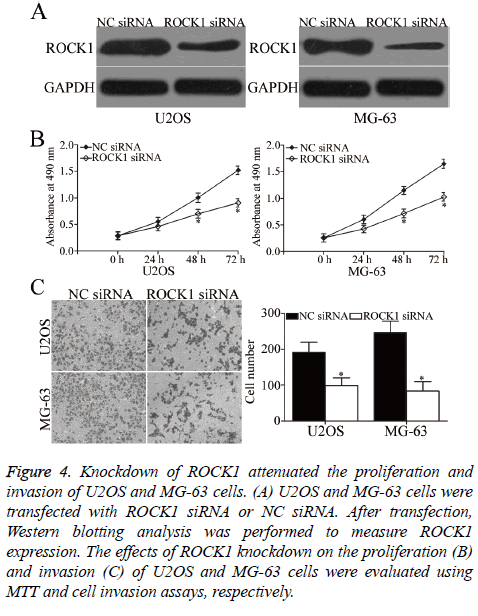 Numerous studies have reported that miR-139 is abnormally expressed in various types of human cancers. For example, miR-139 is downregulated in colorectal cancer tissues and cell lines. Low miR-139 expression is associated with tumour stage, progression and metastasis [10,11]. Patients with colorectal cancer and low miR-139 expression showed poorer prognosis than those with high miR-139 expression [12]. In breast cancer, the expression level of miR-139 was lower in tumour tissues than that in normal tissues. Pronounced downregulation of miR-139 expression was detected in breast cancer tissues that showed high grade, estrogen receptor negative, progesterone receptor negative, high proliferation rate or large size [13]. In hepatocellular carcinoma, miR-139 was lowly expressed in tumour tissues. Decreased miR-139 expression is associated with venous invasion, microsatellite formation and tumour encapsulation and differentiation [14]. Downregulation of miR-139 was also observed in laryngeal squamous carcinoma [15], cervical cancer [16], bladder cancer [17,18] and glioma [19]. These findings suggested that miR-139 may serve as a biomarker in these types of human cancer.

Bioinformatics analysis was performed to predict the target genes of miR-139, especially ROCK1, and illustrate the potential molecular mechanism through which miR-139 inhibits tumour growth and metastasis in OS. Luciferase reporter assay demonstrated that the 3’-UTR of ROCK1 could be directly targeted by miR-139. RT-qPCR and Western blotting analysis verified that miR-139 exerted a negative regulatory effect on ROCK1 expression at the mRNA and protein levels. ROCK1 knockdown showed similar effects to that of miR-139 expression in cell proliferation and invasion in OS. Hence, ROCK1 is a direct and functional target of miR-139 in OS.

ROCK1, located at chromosome 18 (18q11.1) [26], is upregulated in different types of human cancers, such as breast cancer [27], gastric cancer [28], glioma [29] and lung cancer [30]. The expression level of ROCK1 evidently increased in OS tissues and cell lines. Upregulation of ROCK1 was associated with poor outcomes for patients with OS. Functional experiment demonstrated that ROCK1 knockdown suppressed cell proliferation and viability and enhanced apoptosis in OS. Other studies also reported that ROCK1 was involved in the growth and metastasis of OS [31-33]. Hence, ROCK1 may be an effective therapeutic target for anti-tumour therapy of patients with OS.

In conclusion, this study demonstrated that miR-139 inhibited cell proliferation and invasion in OS, at least, partially by regulating ROCK1. Hence, miR-139 may be a novel effective therapeutic target for OS treatments in the future. 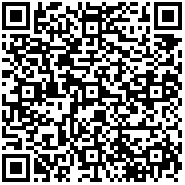