Congenital hypothyroidism is a kind of disease that causes insufficiency physiological effect and metabolism due to the reduction of thyroid hormone synthesis and secretion [1,2]. The critical importance of congenital hypothyroidism therapy has now been brought to the forefront in most industrialized parts of the world [3]. Congenital hypothyroidism is preventable though early detection and seasonable treatments. Despite the optimal therapy and the susceptive in clinical diagnosis and recognition for patients, more and more measures and methods programs for the detection and treatment of congenital hypothyroidism are urging needed [1,2,4,5]. Fibroblast growth factors-21 [FGF-21], one atypical member of the fibroblast growth factors [FGF] family, is a multifunctional protein predominantly secreted by adipose tissue, pancreas and liver [6,7]. FGF-21 is predominantly identified as a momentous controller and regulator of glucose and lipid metabolism as well as long-term energy balance [8,9]. FGF-21 has been found association with various human diseases and metabolic syndrome including the age, obesity, and type 2 diabetes mellitus and congenital hypothyroidism [10-12]. Previous study has showed that FGF-21 resulted in insulin resistance by inhibiting activation of NF-κB [13]. In addition, FGF-21 also played an endocrine hormone role in blocking somatic growth, which led to growth hormone resistance [14]. However, the mechanisms of endocrine hormone associated with starvation were not well understood and clearly elaborated.

The animals’ study was administrated in Guide of Chinese animals’ experiments. All operations were carried out in strict accordance with the recommendations in the Use of Laboratory Animals of the National Institutes of Health. All surgery and blood collection were performed under sodium pentobarbital anaesthesia and analgesia, respectively. We exerted the greatest efforts to minimize suffering for experimental animals.

Total RNAs were extracted from thyroid gland and HT-ori3 cells by using RNA easy Mini Kit (QIAGEN, Gaithersburg, MD). Expressions of FGF-21 in HT-ori3 cells and thyroid gland were measured by applying a RT-qPCR kit (QIAGEN, Gaithersburg, MD). All primers were synthesized by Invitrogen. The amplified PCR products were quantified by measuring the calculated cycle thresholds (Ct) of β actin mRNA. Relative mRNA expression changes were calculated by 2-ΔΔCt. The results in this study are expressed as the n-fold way compared to control.

Serum levels of TSH, T4, thyroxine and FGF-21 were determined by RIA with Coat-A-Count reagents as described previous [19] and FGF-21 protein detection kit.

FGF-21 (once-daily) was administered intravenously injection on a continuous 30-day administration preclinical schedule. Treatment of FGF-21 will be terminated when unacceptable toxicity, progressive disease or death occurred. Doses of FGF-21 confirmation were conducted with experiment proteinuria and hypertension as well as continued until the MTD was determined. In addition, no food was forbidden for 2 hours following administration of FGF-21 once-daily. The score of mice was descripted in previous study [20].

Toxicity of FGF-21 was assessed by using the National Congenital Hypothyroidism Institute Common Toxicity Criteria. Biochemical profile measurement of blood pressure and urinalysis were performed every two days during congenital hypothyroidism treatment periods. Electrocardiograms and biochemical detection were performed every three days. A DLT was defined as any of the following drug-related toxicities in previous study [21].

Heterozygous Titf1+/− mice and heterozygous Pax8+/− mice were originally generated in a mixed genetic background to generate double heterozygote for both Titf1 and Pax8-null mutations (DHTP) mice according to previous study [22]. All mice were assigned Salac Experimental Animals Co., Ltd. Animals were housed in a conventional facility with a 12 h light, 12 h dark cycle and were supplied with standard rodent food. Genotypes were determined by PCR using genomic DNA isolated from the tail snips as described [23]. FGF-21 was administered daily by intravenously injection with PBS as control. Different serums from mice were collected from caudal vein of at least three mice for hormone, blood lipid, triglyceride, low density lipoprotein measurements. Animal experiments were conducted in accordance with the ethical guidelines of the Endocrine Society and approved institutional protocols at the National Institutes of Health.

All data were presented as means and SEM. Statistical significance of differences between mean values was assessed by Student’s t test for unpaired data. Comparisons of data between multiple groups were performed with analysis of variance (ANOVA). Robust nonparametric Hodges-Lehmann estimates of median drugs treatment effects and 95% confidence interval are provided. Responder rates and treatment adverse events were analysed by χ2 test. P<0.05 was considered statistically significant. 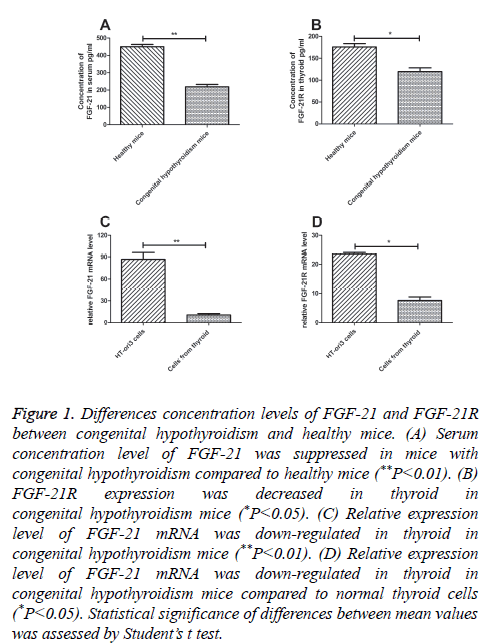 In order to confirm the expression and function of FGF-21 for congenital hypothyroidism, serum from mice with congenital hypothyroidism was used to detect FGF-21 expression by using ELISA as normal mice as control. Our result in Figure 2A showed that levels of FGF-21 in FGF-21-treated and healthy mice was increased compared to non-treated mice (P=0.0037 and P=0.0048, respectively). We observed that FGF-21 level recovered normal level after FGF-21 treatment compared to healthy mice. In addition, serum levels of triglyceride, LDL-cholesterol and serum cholesterol were also analysed prior and post treatment of FGF-21. The results in Figures 2B-2D showed that triglyceride, LDL-cholesterol and serum cholesterol were significantly up-regulated in serum after FGF-21 treatment compared to non-treated mice (**P<0.01, FGF-21-treated and healthy mice vs. non-treated mice). We found FGF-21 serous concentration recovered normal levels in congenital hypothyroidism mice treated by FGF-21 at MTD compared to healthy mice. These date indicated that FGF-21 showed a positive regulation of triglyceride, LDL-cholesterol and serum cholesterol. 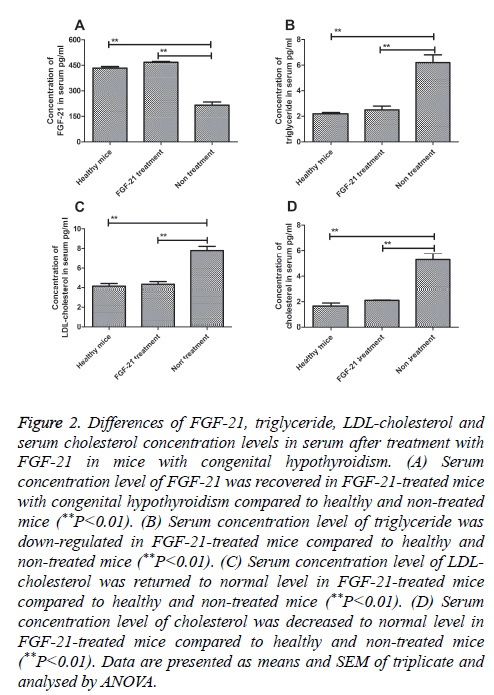 Therapeutic effects of FGF-21 in in mice with congenital hypothyroidism

Median overall duration of treatment was 14 days. The cohorts of dose were 0.06, 0.12, 0.20, 0.28 and 0.40 mg for mice, respectively. In our results, 0.20 mg dose of FGF-21 once daily was identified as the MTD. The lowest-dose cohort of FGF-21 demonstrated the fewest treatment-related adverse events. The most common treatment-related advert events were fatigue, constipation, hypertension, proteinuria, decreased appetite, and weight decreased (Table 1, the overall incidence ≥ 10%).

Table 1: Treatment-related adverse events of FGF-21 with an overall incidence ≥ 10%. 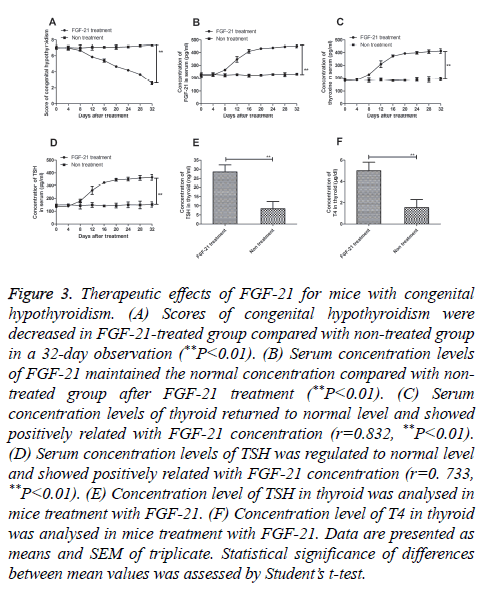 Blood samples obtained from 40 mice with congenital hypothyroidism were used for Pharmacokinetics analysis after the last dose of FGF-21. FGF-21 was absorbed rapidly at MDT dose within 4 hours. As shown in Figure 4A, serum concentration of FGF-21 reached the most maximum after treatment 8 hours. We observed mice Cmax concentrations of FGF-21 increased linearly with the increasing dose (Figure 4B). Our study showed that the median t½ of FGF-21 was ranged from 6.4 to 10.4 hours at the MDT dose (0.20 mg). The time of FGF-21 action lasted 24 hours and terminal elimination by estimating properly treated at the MDT dose. There is no drug accumulation after mice received MDT dosing (0.20 mg) by observing the Cmax values at steady state after the last dose of FGF-21. These date suggested that FGF-21 could preserve efficient concentration and functional time. 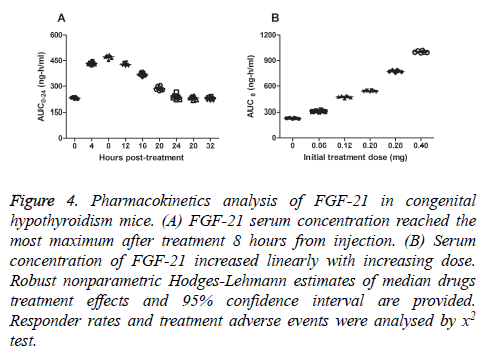 In this preclinical study, dose of FGF-21 at the MTD and lower-dose cohort was associated with manageable toxicity. Treatment-related adverse events were relative minor and FGF-21 showed well tolerate for experimental mice [31]. Fatigue, constipation, hypertension, proteinuria, decreased appetite, and weight decreased, as well as gastrointestinal toxicity were low probability. Proteinuria, hypertriglyceridemia, diarrhoea, and fatigue were the most common treatment-related adverse events in mice after FGF-21 treatment.