Copyright: First Published by Allied Academies. This is an open access article, published under the terms of the Creative Commons Attribution Non-Commercial License (http://creativecommons.org/licenses/by-nc/3.0). This license permits non-commercial use, distribution and reproduction of the article, provided the original work is appropriately acknowledged with correct citation details

Metagenomics is defined as the direct analysis of genomes found in an environmental sample. It involves cloning and analyzing the genomes without culturing the organisms in the community. A number of new and novel molecules with significant functionalities and applications have been identified through this approach. This study focuses on identifying riboswitches in Archaeal metagenomes. Instances of TPP and Ado-Cbl variant riboswitches have been identified in different uncultured archaeal metagenomes. These riboswitches were searched and verified by using various bioinformatics approaches. The findings in Archaeal metagenomes hint at the possibility of finding more predefined and novel classes of riboswitches as new genomic samples are extracted from the environment.

All the ecosystems, such as groundwater, soil, as well as the skin surface and the gastrointestinal tract of animals contain microbial communities that interact with each other and take part in the biological processes surrounding them. The habitat of a community has effects on the complex system of the microbial communities. Metagenomics is the study of genetic material recovered directly from such microbial communities residing in environmental samples. Metagenomics sheds light on the functioning of microbial communities and their surrounding ecosystem. In metagenomic studies, the genomic sequences of a collection of microorganisms are directly extracted from a specific environment. Among the methods designed to gain access to the physiology and genetics of uncultured organisms, metagenomics, the genomic analysis of a population of microorganisms, has emerged as a powerful method (Handelsman, 2004). For analyzing a metagenomic sequence data set, identifying functional sequence elements is a crucial step. Metagenomics is one of the fastest growing scientific disciplines. Originally conceived as a study of collective genomes of non-culturable microorganisms, metagenomics now refers to the use of high throughput DNA sequencing to provide taxonomic and functional profiles of microbial communities without the need to culture microbes in the laboratory (Franzosa et al, 2015).

Metagenomics provides access to the functional gene composition of microbial communities and thus gives a much broader description than phylogenetic surveys, which are often based only on the diversity of one gene, for instance the 16S rRNA gene. On its own, metagenomics gives genetic information on potentially novel biocatalysts or enzymes, genomic linkages between function and phylogeny for uncultured organisms, and evolutionary profiles of community function and structure (Thomas et al, 2012). Metagenomics is also a powerful tool for generating novel hypotheses of microbial function- the remarkable discoveries of proteorhodopsin-based photoheterotrophy or ammonia-oxidation in Archaea attest to this fact (Béja et al, 2000; Nicol and Schleper, 2006). By integrating the information so gleaned with the information about biological functions within the community, the habitat and functional aspects of microbial communities can potentially be probed. Metagenomics could also unlock the massive uncultured microbial diversity present in the environment to provide new molecules for therapeutic and biotechnological applications [http://www.nature.com/nrmicro/focus/metagenomics/index. html]. Recent discoveries in the area of genomics have revealed number of microRNAs (miRNAs) and riboswitches. The numbers of small RNAs (sRNAs) and small nucleolar RNAs (snoRNAs) have also been greatly expanded by recent analyses. However, discovering and analyzing functional RNA sequences is relatively more difficult as compared to more well-developed methodologies for discovering and analyzing protein coding sequences. This suggests the probability of some other RNAs that are likely to be undiscovered or unidentified.

Microorganisms residing in microbial communities help in survival of other microbes through symbiotic interaction. This type of association has been studied in Cenarchaeum symbiosum, a symbiont of a marine sponge, Axinella sp. (Preston et al, 1996). Comparative analyses between metagenomes can provide additional insight into the function of complex microbial communities, their interaction among each other and their role in their host health. Pairwise or multiple comparisons between metagenomes can be made at the level of sequence composition (comparing GC-content or genome size), taxonomic diversity or functional aspect.

This study is based on identifying riboswitches in the Archaeal archaea. Riboswitches are complex folded RNA elements that act as receptors for specific metabolites. They are found in the non-coding portions of various mRNAs, where they control gene expression via structural changes that are brought about by metabolite binding. Riboswitches play an important role in the regulation of bacterial transcription and translation without any involvement of proteins (Mandal and Breaker, 2004; Winkler and Breaker, 2005; Breaker, 2012). Riboswitches regulate several metabolic pathways, for example, the biosynthesis of vitamins (e.g. riboflavin, thiamin and cobalamin) and the metabolism of methionine, lysine and purines. Candidate riboswitches have also been observed in archaea and eukaryotes. Riboswitches are thought to be the descendants of an ancient sensory and regulatory system that likely functioned before the emergence of enzymes and genetic factors made of proteins (Strobel and Cochrane, 2007).

The study reveals the sporadic occurrence of riboswitches in Archaeal metagenomes, so far. However, their presence in other domains has been widely studied. The known riboswitches are involved in regulation of numerous fundamental metabolic pathways (Mandal et al, 2003; Vitreschak et al, 2004) and have been found not only in bacterial genomes, but also in archaeal and eukaryotic genomes (Sudarsan et al, 2003). Several metagenomic samples have been searched in this study from varied sources like hydrothermal vent sediments to hypersaline Antarctic lake. However, only two riboswitches have been identified in samples, TPP and Ado-Cbl Riboswitch. We have identified Thiamine pyrophosphate (TPP) and (Adenosylcobalamine) Ado-Cbl Variant riboswitches in Archaeal Metagenomes by using bioinformatics approaches. TPP represents one of the most intensively studied riboswitch class and is the most essential cofactor in bacteria, archaea, and eukatyotes. TPP is the active form of thiamine (vitamin B1), an essential coenzyme synthesised by coupling of pyrimidine and thiazole moieties in bacteria. TPP riboswitches were first identified in B. subtilis and E. coli.

AdoCbl riboswitch is a cis-regulatory riboswitch element present in untranslated regions of mRNA where binding adenosylcobalamin (Ado-Cbl) causes a change in gene expression. Ado-Cbl is a source of carbon-based free radicals that enzymes use to catalyze a variety of isomerizations (Rodionov et al, 2002). Ado-Cbl is one of two coenzymes derived from vitamin B12, the other being methylcobalamin (MeCbl) (Marsh 1998). Both coenzymes derive biological function from the ability to form a unique, stable, covalent bond between the central cobalt atom and 5’ carbon of adenosine (Fox et al, 2009). This riboswitch has been shown to be conserved across several strains of bacteria and has an influence over the expression of the ethanolamine utilization genes. It is proposed to be a subclass of the previously described classical Ado-Cbl-sensing riboswitch. This new subclass of Ado-Cbl riboswitches has both sequence and structural conservation with the core region of the classical Ado-Cbl-sensing riboswitches however it has some clear differences. The new element lacks a paired region formed by the pairing of the 5’-3’ ends found in canonical Ado-Cbl riboswitches. It also has an additional extra base-paired region near the 3′ terminus that is absent from the classical Ado-Cbl riboswitches (Banerjee, 2006).

Instance of TPP riboswitch is found in uncultured archaeon clone ASS A1 isolated from acid sulfate soils of farmland in Australia, Murry Bridge from a depth of 0.80 metre. The hit was compared to an already defined riboswitch in Archaea, Picrophilus torridus. This organism is a thermoacidophile, and can grow at temperatures around 60oC, in environments where the pH drops to 0. The name reflects the area where the organism was isolated, which was a hot dry soil in Kawayu, in northern Japan, that was solfataric (volcanic area that gives off sulfur) (Fütterer et al, 2004) and was also compared to the bacteria,Bacillus subtilis subtilis. Based on sequence conservation, structure conservation and free energy, we concluded it as putative TPP riboswitch. TPP domain from E. coli thiM mRNA was used as template for the modeling of the TPP riboswitch from the uncultured archaeon clone ASS A1 (Table 1).

U A U G A C C A C U - AGGGGUGCCCUUCAAAAGGGCUGAGAUAAAAGUCUUUUAGACCCUCAUAACUUGAACAGGUUAAAACCUGCGUA

Comparative modeling of TPP riboswitch from archaea, bacteria and archaeal metagenome and template

Score was obtained by using ARTS web server (http:// bioinfo3d.cs.tau.ac.il/ARTS/pairwise_alignment.html) (Dror et al, 2006) (Table 2). It gives the information about (i) the number of matched base pairs (BP Core Size); (ii) the total number of matched nucleotides including unpaired ones (Core Size); (iii) the root mean square deviation (RMSD) between the phosphate atoms of the matched nucleotides in the core; (iv) the P-value.

The binding arrangement of TPP in the binding pocket of TPP riboswitch is held by a T-loop-like turn formed by the conserved U39-G40-A41-G42-A43 segment, closed by a reverse Hoogsteen U39-A43 pair. The backbone is extended at both G40-A41 and G42-A43, resulting in the mutual intercalation and insertion of the Thiamine ring between these interacting segments (Figure 2A-B). Further, the fold is stabilized by continuous stacking of A41, G42, TPP, A43 and G21, and by the formation of (G19-A47)-G42 and (G18-C48)-A41 triples. The pyrophosphate group of TPP is bound in a spacious pocket by a pair of hexa-coordinated Mg2+ ions (Mg1 and Mg2) with octahedral ligation geometry that are positioned by direct and water mediated hydrogen bonds with RNA .The terminal phosphate of TPP is coordinated to both Mg1and Mg2, whereas the thiazole-linked phosphate is coordinated to Mg2. Mg1 is directly coordinated to the O6 carbonyls of the conserved G60 and G78 that are located in the region previously implicated in pyrophosphate recognition. In addition, the conserved C77 and G78 form hydrogen bonds to the oxygen atoms of the terminal phosphate of TPP (Serganov et al, 2006) (Figure 3).

In this study it is observed that in every domain, the active site residues that respond to the TPP are well conserved (Figure 4). 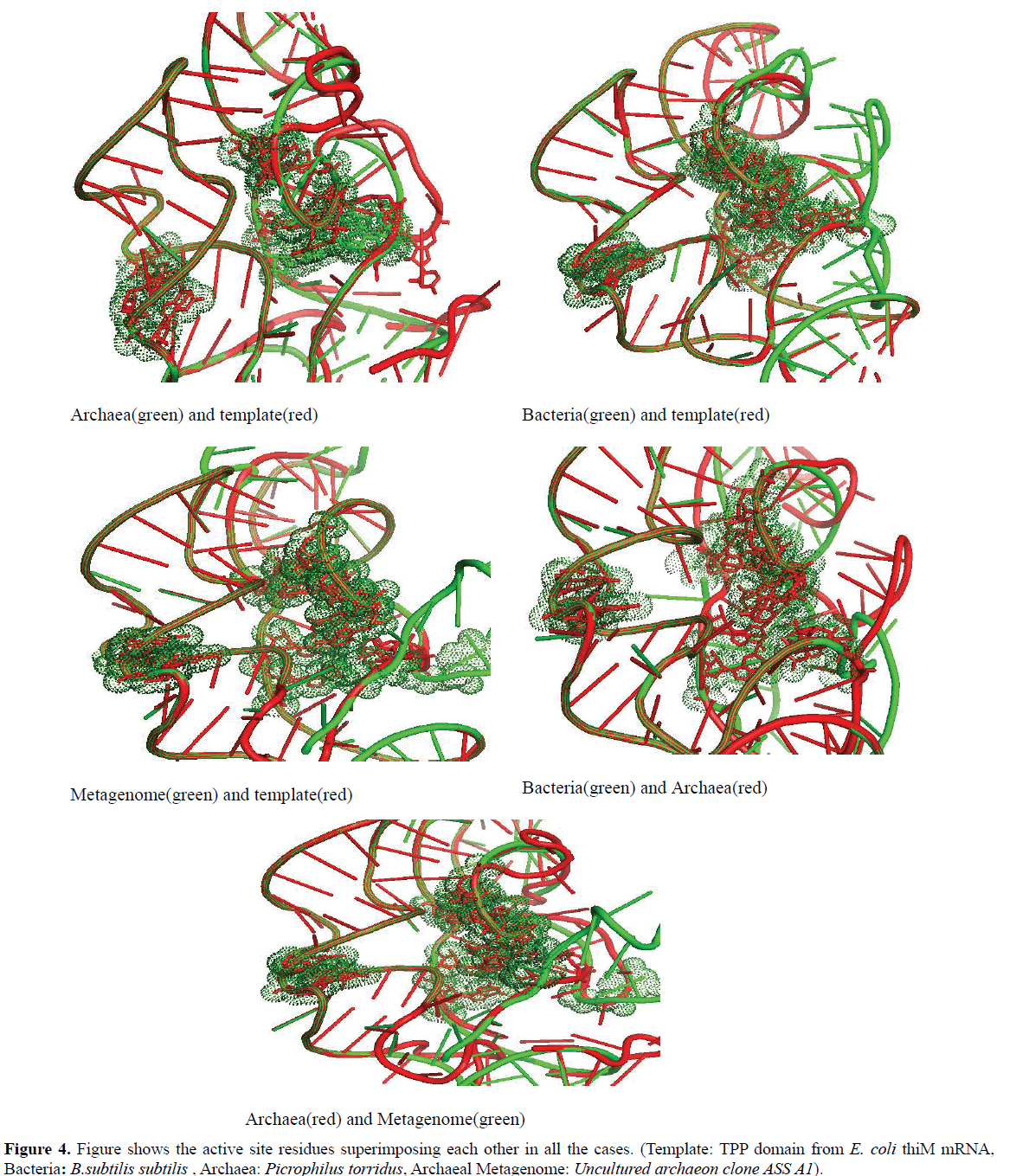 We found that the active site residues of bacteria, archaea and archaeal metagenome TPP riboswitch were lying in the same proximity and were exactly superimposed on each other. This clearly indicates that TPP riboswitch domain shows significant level of conservation of the binding pocket among all the domains of life.

Uncultured marine thaumarchaeote KM3_88_D08 genomic sequence was obtained from Ionian sea and Archaeon GW2011_ AR15 genome was obtained from groundwater. Sequences were downloaded from NCBI genome. The sequences thus obtained were further analysed at their sequence and structural level by comparing them to previously defined riboswitch. Their sequence alignment among them and among other organisms derived from marine metagenomes (Source: Rfam) is given in the (Figures 5 and 6). Their secondary structures were compared with previously identified Ado-Cbl Variant riboswitch. It was observed that the secondary structures were very similar to the previously identified Ado-Cbl variant riboswitch and have a high degree of conservation among all the domains (Figure 7A-C). 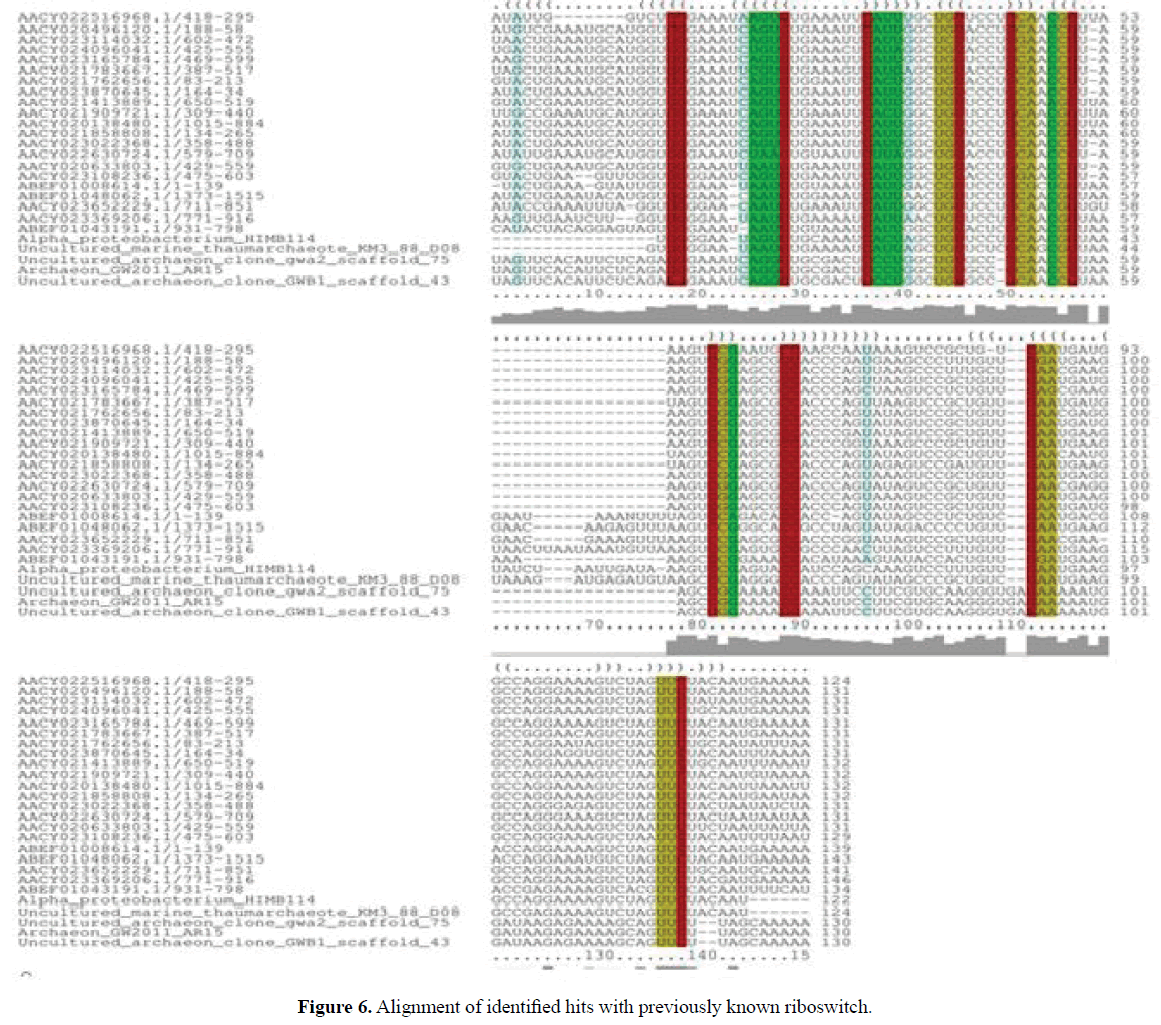 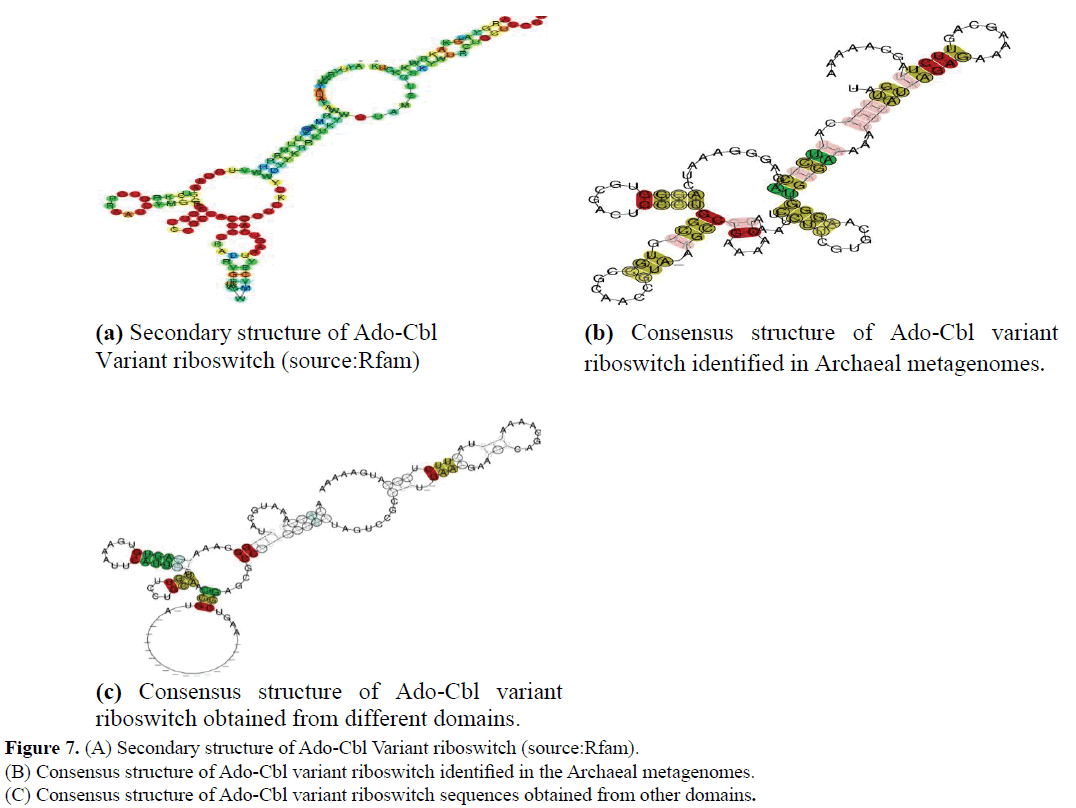 Previous studies (Yadav et al, 2015) have established the TPP riboswitch to be widely distributed in bacteria, and quite abundantly in plants and fungi. However the samples of Archaeal metagenomes yielded only a few instances of TPP as revealed in this study, thereby pointing to the lesser utility of vitamin B metabolic factor in their metabolism. This is also corroborated by the search of TPP riboswitch in Archaeal genomes (manuscript under preparation).

These regulatory RNA elements participate actively in the gene regulatory processes. Also, in this study, other than Picrophilus torridus no more instances of TPP riboswitch were found in genomes obtained from sulphur rich environment. Other previously known instances of TPP riboswitches are found in different environmental conditions like Thermoplasma acidophilum, a thermophilic, acidophilic archaeon that was isolated from a self-heating coal refuse pile in south-western Indiana (Ruepp et al, 2000), Thermoplasma volcanium, isolated from acidic hydrothermal vents on the shore of Aeolian Island of Vulcano, Italy (Kawashima et al, 2000), Ferroplasma acidarmanus, an archeon growing at low pH in metal-rich solutions and is an iron-oxidizing organism capable of growth at pH 0 (Allen et al, 2007) and Candidatus Korarchaeum cryptofilum OPF8 growing in high temperatures (Elkins et al, 2008). This suggests a very sparse presence of occurrence of TPP riboswitch in sulphur rich condition.