Background: In limited stage small cell lung cancer, involved field irradiation has been considered as standard. However, there have recent reports suggesting higher than expected nodal recurrence in the supraclavicular region. The study aimed to explore the reasonable radiotherapy range of supraclavicular zone for patients receiving prophylactic or radical radiation.

Small Cell Lung Cancer (SCLC) remains a major public health problem and accounts for 10% to 15% of all lung cancers [1]. It has unique clinical features such as rapid growth, early metastatic spread, and widespread dissemination. At present, definitive chemoradiation is considered a standard treatment option for limited disease SCL (LD-SCLC). As a component of this therapy, radiotherapy is an important integral part of the management of LS-SCLC, which promotes local control and also contributes to the survival benefit for patients with limited disease [2]. Historically, radiotherapy portal included all mediastinal Lymph Nodes (LNs) and supraclavicular LNs irrespective of primary tumor extent [3-6]. Due to the chemotherapy and incidental radiation therapy to subclinical disease in the uninvolved lymph nodes might have been sufficient, isolated out-field nodal recurrences are seldom seen. Hence, it is common to see omission of elective nodal irradiation applied in clinical practice [7-11].

However, several clinical studies demonstrated that the involved field radiotherapy (IFRT) by Computed Tomography (CT) scans or Positron Emission Tomography (PET-CT) in patients with LS-SCLC resulted in a higher than expected rate of lymph nodal failures in the supraclavicular region, in particular for patients with N2/N3 status [9,11-15]. Although we applied IFRT for those patients, actually, incidental irradiation has been delivered to the surrounding areas, especially mediastinal regions [16]. Hence, the lymph nodal failures in the mediastinal station are extremely rare. However, supraclavicular region seldom received incidental radiation therapy, which exposed this region to a relatively high risk of outfield failure, as was seen in those studies [9,11-15]. In the current era of precise radiotherapy, the clinical target volume for radiotherapy is mainly confirmed by CT-images means. The target area for the mediastinum region and the lower abdominal region is relatively clear, while supraclavicular region is not.

After obtaining the approval of the institution’s research ethics board, we performed a single-center retrospective analysis of 453 patients with diagnosed SCLC during 2010 through 2014. Stage of disease was determined using brain Magnetic Resonance Imaging (MRI), contrast-enhanced CT of the cervical, chest and abdomen, bone scintigraphy, and PET-CT was also used for some patients. The inclusion criteria were as follows: (1) patients with supraclavicular LNM; (2) there have lower neck CT scan. The exclusion criteria were mixed pathology between non-small and small cell cancer, before or coexisting malignancies.

Currently, there is no uniform standard to partition the supraclavicular region. On the basis of some studies, we classified the lower neck into the two sides, the midline of the body serves as the border between right and left [16-18]. Moreover, each region was classified into 4 groups as upper para-recurrent laryngeal neural region (UP region), lower pararecurrent laryngeal neural region (LP region), medial supraclavicular region (MS region), lateral supraclavicular region (LS region). Table 1 showed the details of the anatomic structures for each region. Figure 1 showed the sketch map of each region at different bedding planes of CT-image. 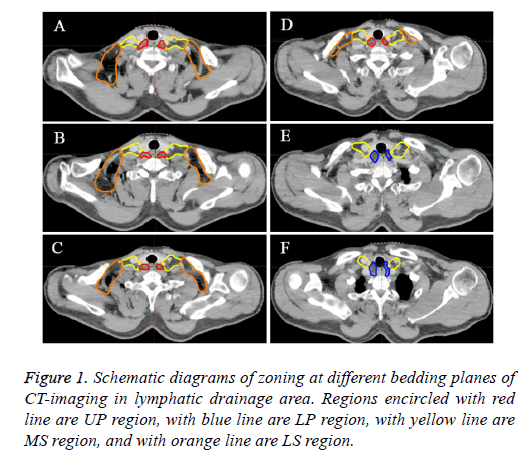 Figure 1: Schematic diagrams of zoning at different bedding planes of CT-imaging in lymphatic drainage area. Regions encircled with red line are UP region, with blue line are LP region, with yellow line are MS region, and with orange line are LS region.

(2) The presence of necrosis, markedly inhomogeneous enhancement on enhanced CT scans; positive LNs appeared at uncommon regions; fluorodeoxyglucose-avid (if used); and the response to anti-tumor therapy was obvious [19-21]. All images were reviewed and interpreted by 2 experienced radiological experts.

The positions of the metastatic lower cervical LNs for all enrolled patients were re-read respectively and then recorded the positions of positive LNs based on previous literature [21,22].

After the inclusion and exclusion criteria, 93 patients were included in this study. Clinical Features of Patients with SCLC and the characteristics of tumor are summarized in Table 2. The median age of those patients included in this study was 57 years (range, 48-74 y). Of these 93 patients, 67 patients were male and 26 female. Of the 93 patients whose records were examined, a total of 138 metastatic LNs were found in the lower cervical region, and the number of positive LNs per patient ranged from 1-3. Among all 138 nodes, 47.1% located on the left and 52.9% located on the right.

Table 2. Clinical characteristics of 45 small cell lung cancer patients with SCV node involvement and the distribution of those nodes.

Omission of uninvolved nodal stations in radiation therapy is a straightforward strategy to reduce the radiation related toxicity, as has been recently reported [7,9,12,13,23]. However, the use of involved-field radiotherapy (IFRT) or Elective Node Irradiation (ENI) in LS-SCLC remains controversial [24]. Although IFRT is becoming common in contemporary clinical practice, high-level evidence to support the practice of omission of ENI is still rare. Recently, several clinical studies reported that a high incidence of local nodal failure, were noted in supraclavicular fossa in patients of LS-SCLC. Tada et al. [25] examined the pattern of failures in patients with SCLC treated with IFRT. The results showed that patients with N2 or N3 LS-SCLC appeared to have more regional relapses in the upper mediastinum and supraclavicular fossa. Similarly, De et al. [12] demonstrated that the IFRT on the basis of CT scans in patients with SCLC resulted in a higher than expected rate of isolated nodal failures in the supraclavicular fossa. Recently, a prospective study conducted by Hu et al. [11] reported patterns of recurrence after IFRT in LS-SCLC. In their study, isolated nodal recurrences, which all in the ipsilateral supraclavicular fossa, were reported with mediastinal N3 disease in 100% patients. Therefore, based on their preliminary results, in one of his studies, N3 disease patients will receive prophylactic irradiation to the ipsilateral lower neck. Accurately delineating the scope of irradiation range is the prerequisite for treatment. However, accurate determination of the appropriate range of radiation is challenging for clinical practice.

At presents, there is still no relevant recommendation for radiotherapy in supraclavicular lymph node zone of small cell lung cancer. Target volumes are often defined primarily on the basis of the distribution of normal lymphatics or by vascular and bony landmarks. A large lateral extent of the irradiation field theoretically brings a greater regional control. However, the more generous coverage discussed herein must be balanced by an awareness of potential toxicities associated with treatment. Extensive research indicated that a large lateral extent of the lower neck irradiation field could bring more toxicity by irradiating extra volumes, especially lymphedema, lung damage, and brachial plexopathy. A study performed by Graham et al. investigated the effect of Supraclavicular Fossa (SCF) radiotherapy volumes on the development of lymphoedema. The results showed that irradiation field lateral to the coracoid process was a significant risk factor for lymphedema (P=0.002) [26]. In the MA.20 trial, the irradiation field included the head of clavicle medially and the coracoid process laterally and the levels I and II axilla in some patients. The results showed that those patients had higher rates of lymphedema (8.4% vs. 4.5%; P=0.001) and acute pneumonitis (1.2% vs. 0.2%; P=0.01) [27]. Those dates indicated that irradiating extra volumes would be associated with more toxicity. Hence, it is important to accurately define the supraclavicular nodal region at risk, which could better cover target areas and spare normal tissues. The central aim of this study was to characterize the distribution of these nodes according to CT scan in patients with supraclavicular regional lymph node involvement and to use this evidence to suggest contours of the reasonable CTV margin in the supraclavicular zone. Recently, Luo et al. [28] explored the distribution pattern of lower cervical metastatic lymph node in esophageal cancer and found that supraclavicular zone metastasis frequently occurred in the cervical paraesophageal lymph nodes and lower cervical fossa. Inconsistent with the study of EC. As shown in Table 3, metastasis frequently occurred in MS region and the LP region for SCLC patients. While the incidence in others region is low, it may be reasonable to exclude these lymph nodes from the CTVn. Based on this study, the MS region and LP region are considered to be the high risk regions for LNM, which were the regions for prophylactic irradiation.

There are some limitations in this study. Firstly, it was a retrospective study, our data originated from a single institution and the sample size of the present study was not enough. Furthermore, the diagnosis of positive LNs in the present study was on the basis of image data, rather than pathological evidence. Thus, we cannot make sure that all of the enlarged lymph nodes contain metastatic lesions. Fortunately, Most of the patients with lower cervical metastases in the study were underwent the PET/CT image, and PET/CT is generally reported to have a high rate of sensitivity and specificity in this setting [13,29,30]. Thus, the outcome of our study is credible.