Experimental study on effect of calcitonin on osteoclast functions

Objective: It's aimed to study the effect of calcitonins on osteoclast functions.

Method: Osteoclasts were acquired from 10 neogenic SD rats by mechanical separation method and then cultured in vitro by bone marrow derivation method; the calcitonins with different consistencies were added into the culture media, the numbers and forms of calcitonins were observed after tartrateresistant acid phosphatase staining, the changes in numbers and forms of bone resorption lacunas were analyzed with an image software of Image Pro Plus after 48h culturing and finally the apoptosis rate was measured by a flow cytometer.

Preparation of bone-ground section and cover slip: Transected cortical bone of fresh calf femur into 100 m-thick segments with the low-speed sawing slicer, ground them to 10 m thick with energy stone and then cut them into 8 mm × 8 mm thin sections; cleaned the bone sections for 3 times with an ultrasonic cleaner, then steeped them in D-Hank’s solution containing 1000 U/ml penicillin and 1000 U/ml streptomycin and replaced the solution every 30 min for totally 3 times; put the prepared cover slips into the D-Hank’s solution containing 1000 U/ml penicillin and 1000 U/ml streptomycin for replacement of 2 times (20 min for each time). Dipped the bone sections and cover slips treated as above into ethanol (volume fraction 85%), took them out after 24 h, placed them under an ultraviolet light overnight and then put them into the a-MEM culture solution.

Separation of osteoclast: Osteoclasts mechanically separated from limb bones of neonatal rat were collected onto boneground sections and 1.8 cm × 1.8 cm cover slips for wall culture (volume fractures of carbon dioxide and air were 5% and 95%, respectively, and temperature was 37°C) for 30-60 min, cells not sticking to walls were washed off with prewarmed MRM culture solution for 2-3 times, then they were cultured under the conditions of carbon dioxide (volume fracture 5%) and 37°C saturated humidity and then transferred into a-MRM culture solution containing 10-8 mmol/L1, 25 (OH) 2 D3 after 24 h (1 ml per well), and the culture solution was changed once every 3 d [3,4].

Appraisal of cultured osteoclast: the samples were taken out after 48 h of tartrate-resistant acid phosphatase staining of cover slips and toluidine blue staining of bone-ground sections and then an inverted phase contrast microscope was used to observe live cellular morphology of osteoclasts and formation of lacunas after culturing.

Determination of apoptosis rate of osteoclast: Propidium iodide was inserted to DNA for quantitative staining; cells were normally digested and collected after 24 h; cells were washed with PBS solution for 2 times; cells were immobilized with ethanol (volume fraction 75%) under -20°C. The cells were centrifuged at 1200 rpm for 3 min to remove immobile liquid. The cells were washed with PBS for 2 times; 0.5 ml PBS was added to prepare cell suspension specimens; the specimens were put into a solution (volume fraction 1:50) containing 0.1% Triton-X-100, 5 g propidium iodide (50 mg/L) and 2 ml LRNAase and lightly shaken; then they were placed under -40°C for photophobic staining for 60 min and screened with a 400-eye sieve; the cell consistency was adjusted; finally the specimens were tested on the instrument. 5000-10000 cells were tested (under the argon ion laser with 488 nm wave length) for each specimen and the multicycle DNA analysis software was used to measure the apoptosis rate of cells. The observation indices were mainly the apoptosis rate of osteoclast and the positive cell count of tartrate-resistant acid phosphatase [5].

The statistical treatment was done for experimental data acquired in this study with SPSS13.0 statistical software by a specially assigned person. The normality test and homogeneity test for variance were conducted firstly, various sets of means passing the above tests were compared through the single factor analysis of variance and the LSD test was carried out to carry out pairwise comparison. The result was expressed in ͞x ± s and P<0.05 indicated statistical significance of the difference.

After the bone marrow cell suspension inoculated onto cover slips was cultivated for 40 min, it was found that the osteoclasts had attached to walls and the cytoplasm extended gradually and took the form of large volume, clear profile and more nucleuses with different sizes and forms. The shape was irregular but changed gradually and the convex-concave stretching motion of pseudopods could be seen. In the beginning, it could be seen that the interstitial cells of bone marrow or other cells were mingled in it, but were washed off later, leaving the osteoclasts, which were more tightly attached to walls, were large in volume, contained more nucleuses (several to scores), were irregular in forms (taking the shape of strip, omelette, funnel or sausage) and had bubbles of unequal sizes in cytoplasm and higher purity (Figure 1). 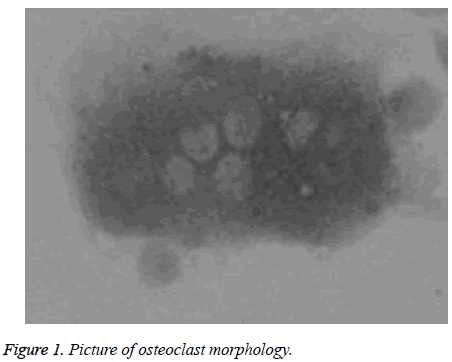 The active element of tartrate-resistant acid phosphatase was uniformly distributed in cytoplasm, is granular and claretred and has vivid pseudopods and clear negative nucleoli (Figure 2). 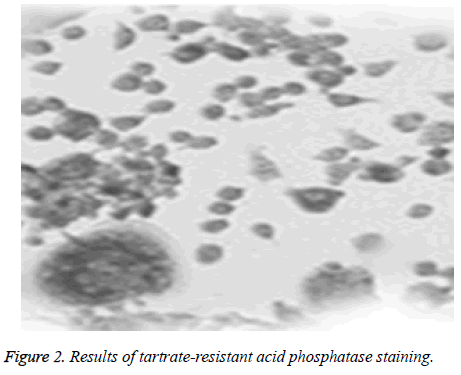 Effect of calcitonin on apoptosis rate of osteoclast

It was found in the inspection with a flow cytometer that the osteoclast cultured in this study had a certain basic apoptosis rate, the calcitonin could increase the apoptosis rate of osteoclast in the positive dose correlation with its consistency; when the consistency was ≥ 10-10 mol/L, the effect of the calcitonin was of great significance while compared with the control group (P<0.05) (Table 1).

Table 1. Effect of calcitonins with various consistencies on apoptosis rate of osteoclast.

Main cells for activity of bone resorption were osteoclasts, which play a critical role in fracture, osteoporosis and other metabolic bone diseases. So, researchers have paid more and more attention to them [12-14] and gradually started to investigate their in-vitro culturing and purification methods. However, there have been no reports on sufficient quantity of acquired osteoclasts so far and it is insufficient to carry out biochemical studies. Therefore, relevant report is rare. At present, the existing osteoclast separating methods include: the method of using a compound of Type I collagen gel and phosphorite collagen is adopted for separation; non-adhesive bone marrow cells are excited with RANKL and PGE2V and then put in the culture medium containing M-CSF megacell colony stimulating factor for 24 h to acquire the osteoclasts. Although the osteoclasts acquired by these methods are higher in purity, their absorption functions still need to be further researched.

In this study, 1, 25 (OH) 2 D3 was used to induce differentiation of bone marrow stroma cells to obtain the osteoclasts, which were large in volume, contained more nucleuses and had bubbles of unequal sizes in cytoplasm and microvilli on surfaces. The most characteristic feature of the osteoclasts was: after tartrate-resistant acid phosphatase staining of the cytoplasm, the red insoluble deposits were generated in active element s and bone resorption lacunas were formed simultaneously. In this study, osteoclasts, which were positive in tartrate-resistant acid phosphatase staining, contained more nucleuses and were in pseudopod motion, were separated from limb bones of SD neonatal rat and then planted onto bone sections to form absorption lacunas, which met the standard of appraising the cell and this separation method was feasible accordingly.