The natural antioxidant curcumin has been proposed for cancer chemoprevention, as it reduces proliferation of several types of cancer. In this study, we investigated anticancer efficacy of curcumin in two human osteosarcoma cell lines, U2OS and MG-63. The results demonstrated that the proliferation of the osteosarcoma cells was significantly inhibited in a time- and concentration-dependent manner when incubated with curcumin. Furthermore, after being treated with curcumin, the level of apoptosis significantly increased, and the expression level of apoptosis-related proteins increased. The invasion properties of the cell lines decreased gradually. MG-63 cells, which have a P53 gene mutation, were more sensitive to curcumin than U2OS cells. Therefore, curcumin has an obvious inhibition effect on the human osteosarcoma cell lines, and the P53 gene may play an important role in this process. Curcumin is a promising antitumor drug for human osteosarcoma treatment.

As one of the most common malignant bone tumors, osteosarcoma can be found in approximately 30% of the patients with malignant bone tumors. It is of especially high prevalence in children. Osteosarcoma first peaks in the adolescence stage of human, less prevails among the age group that begins with 65. About 400 patients are diagnosed with osteosarcoma each year in the United States. Osteosarcoma originates in mesenchymal cells, and presents mainly at the tip of long bones, such as the knee, hip and shoulder. The ten-year survival rate of osteosarcoma patients is approximately 60% to 75%. At present, osteosarcoma is usually treated by preoperative chemotherapy, amputation or limb salvage tumor resection and postoperative chemotherapy. Chemotherapy drugs have an obvious lethal effect on both osteosarcoma cells and normal human cells, which may further reduce the survival of osteosarcoma patients due to its side effects [1]. To this end, a new chemotherapy drug is needed that kills more osteosarcoma cells but does less damage to non-cancerous tissues.

Curcumin is a natural product extracted from plants. It is used in China as a traditional medicine to treat a variety of diseases. Curcumin can exert anti-tumor effects by acting on the multiple targets, such as transcription factors, apoptosis genes, and cell signaling molecules [2,3]. Studies have shown that curcumin had clear anti-cancer effect on liver cancer, stomach cancer, pancreatic cancer and other cancers [4,5]. Curcumin has a wide range of pharmacological effects, low toxicity and is well tolerated in humans [6].

Curcumin (Sigma-Aldrich, Inc., St. Louis, MO, USA) was dissolved in DMSO at 20 mM as a stock solution. Dilutions of all reagents were freshly prepared before each experiment.

Human osteosarcoma cell lines U2OS and MG-63 were purchased from the cell bank of the Shanghai Institute of Cell Biology, Chinese Academy of Sciences. Cells were cultured in DMEM medium (GIBCO/BRL, Grand Island, NY, USA) supplemented with 100 U/ml penicillin, 100 mg/ml streptomycin and 10% fetal bovine serum. All cells were incubated at 37°C in an atmosphere containing 5% CO2.

U2OS cells were divided into four groups. Group A, the control group, was treated with Phosphate Buffered Saline (PBS); and groups B, C and D were treated with PBS containing 5, 10 and 20 μmol/L curcumin, respectively.

The same method was used to for the study groups of MG-63 cell lines.

Human osteosarcoma cell proliferation was evaluated by 3-(4, 5-dimethylthiazol-2-yl)-2, 5-diphenyltetrazolium bromide (MTT) assay. All cellular growth assays were performed in 96 well plates (1 × 104 cells/well). MG-63 and U2OS cells were cultured with increasing concentrations of curcumin for 48 and 72 h. Cells were treated with 10 μl MTT (5 mg/ml)/well and incubated for 4 h at 37°C. The formazan dye generated by cellular dehydrogenase activity was dissolved in DMSO and quantified by measurement of absorbance at 490 nm.

MG-63 cells were treated with 0-20 μmol/L curcumin for 12 h, and then subjected to western blotting using antibodies against Bcl-2, Bax, cleaved poly (ADP-ribose) polymerase (PARP), caspase-3, and β-actin. At the indicated time, the treated cells were harvested and washed twice with ice-cold PBS (pH 7.4). Cells were then lysed with ice-cold buffer for half an hour on ice, and the lysates were centrifuged at 12000X g at 4°C for 15 min. Protein concentration was determined, and sodium dodecyl sulfate polyacrylamide gel electrophoresis was used to separate equal amounts of protein. The separated proteins were then transferred to polyvinylidene difluoride membrane. The indicated antibodies were used to probe the proteins, followed by appropriate secondary antibodies (Rockland Immunochemicals, Gilbertsville, PA). Detection was carried out with an odyssey infra-red imaging system (LI-COR, Lincoln, NE). Equal loading was confirmed using primary antibodies against β-actin.

Matrigel (Cat. 356234, BD Biosciences, USA) was diluted 1:19 with serum-free DMEM and 50 ml was used to coat each invasion chamber (Transwell; Corning 8 mm pore size; Corning, NY, U.S.A.). MG-63 and U2OS cells (1 × 105) were treated with increasing concentrations of curcumin for 48 h in the upper chamber, while the lower compartment was filled with 10% fetal bovine serum in DMEM. After 48 h of incubation, the Matrigel on the upper side of the filter was removed. The cells that had migrated through the membrane between the chambers were fixed with methanol and stained with 1 mg/ml crystal violet dye. Images of cells that invaded the lower chamber were obtained under a microscope (IX81, Olympus, Japan).

Caspase-3 activity was measured with a caspase-3 colorimetric assay kit (KeyGEN Biotech, Nanjing, China) according to the manufacturer’s instructions. Briefly, cells were harvested and lysed after treatment, then centrifuged at 12000X g for 15 min at 4°C. The supernatant was collected, and a bicinchoninic acid protein assay kit (Pierce, Rockford, IL, USA) was used to measure protein concentration. Supernatant containing 50 μg of total protein was incubated with caspase substrate at 37°C for 4 h in the dark. Absorbance at 405 nm was assessed using a microplate reader. Caspase-3 activity was calculated as the Optical Density (OD) in curcumin-treated cells as a percentage of the OD in control cells. 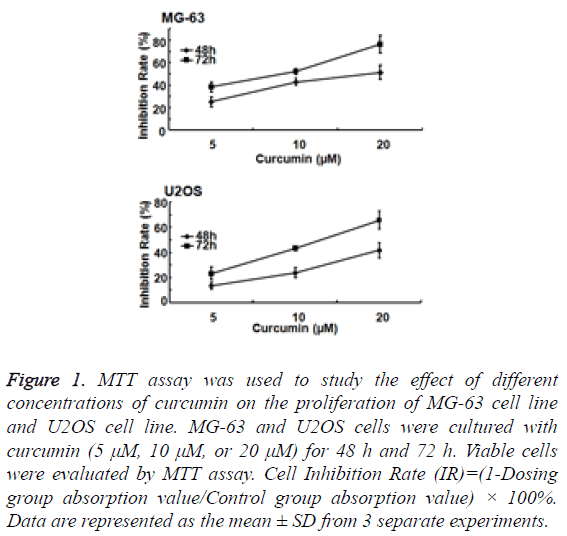 Figure 1: MTT assay was used to study the effect of different concentrations of curcumin on the proliferation of MG-63 cell line and U2OS cell line. MG-63 and U2OS cells were cultured with curcumin (5 μM, 10 μM, or 20 μM) for 48 h and 72 h. Viable cells were evaluated by MTT assay. Cell Inhibition Rate (IR)=(1-Dosing group absorption value/Control group absorption value) × 100%. Data are represented as the mean ± SD from 3 separate experiments.

The degree of inhibition of MG-63 and U2OS cell proliferation also significantly correlated with the duration of curcumin treatment. The inhibitory effect of curcumin in the 72 h group was significantly greater than that in the 48 h group (P<0.01).

Many studies have shown that curcumin not only inhibits the proliferation of tumor cells, but also promotes tumor cell apoptosis. To verify the promoting effect of curcumin on apoptosis of human osteosarcoma cell lines, flow cytometry was used to evaluate apoptosis of MG-63 and U2OS cells.

After treatment with 5 μM, 10 μM, and 20 μM curcumin for 24 h, the rate of apoptosis in MG-63 and U2OS cells increased significantly. Furthermore, the increase in apoptosis was positively correlated with the curcumin concentration (Figure 2). 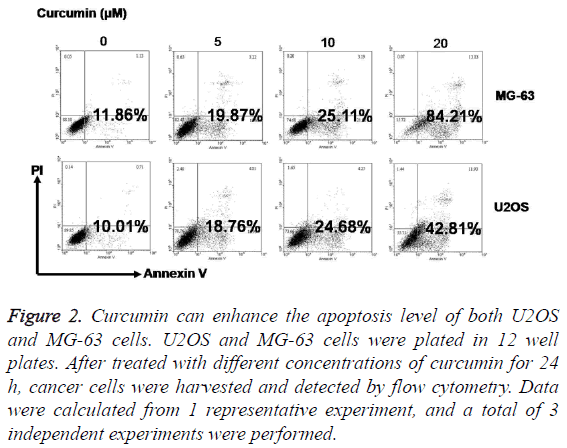 Figure 2: Curcumin can enhance the apoptosis level of both U2OS and MG-63 cells. U2OS and MG-63 cells were plated in 12 well plates. After treated with different concentrations of curcumin for 24 h, cancer cells were harvested and detected by flow cytometry. Data were calculated from 1 representative experiment, and a total of 3 independent experiments were performed. 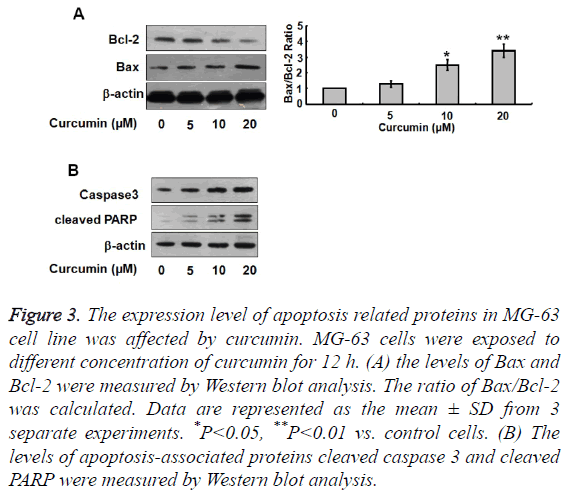 Figure 3: The expression level of apoptosis related proteins in MG-63 cell line was affected by curcumin. MG-63 cells were exposed to different concentration of curcumin for 12 h. (A) the levels of Bax and Bcl-2 were measured by Western blot analysis. The ratio of Bax/Bcl-2 was calculated. Data are represented as the mean ± SD from 3 separate experiments. *P<0.05, **P<0.01 vs. control cells. (B) The levels of apoptosis-associated proteins cleaved caspase 3 and cleaved PARP were measured by Western blot analysis.

Effect of curcumin on MG-63 and U2OS cell invasion ability 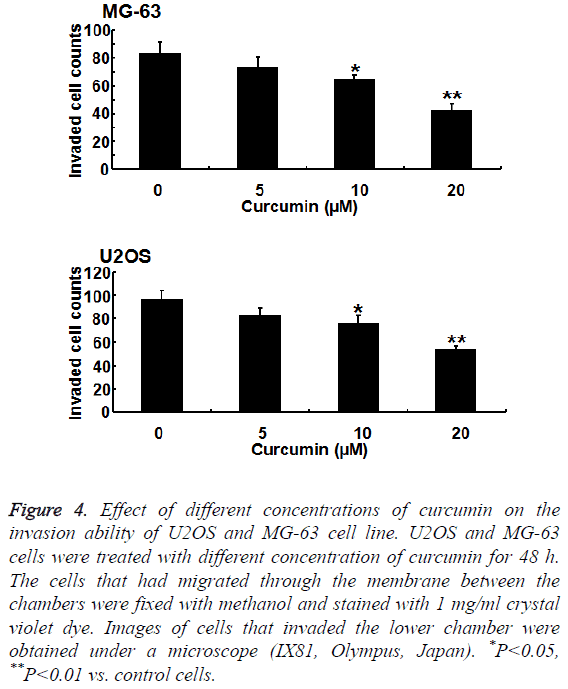 Figure 4: Effect of different concentrations of curcumin on the invasion ability of U2OS and MG-63 cell line. U2OS and MG-63 cells were treated with different concentration of curcumin for 48 h. The cells that had migrated through the membrane between the chambers were fixed with methanol and stained with 1 mg/ml crystal violet dye. Images of cells that invaded the lower chamber were obtained under a microscope (IX81, Olympus, Japan). *P<0.05, **P<0.01 vs. control cells.

Analysis of caspase-3 activation in MG-63 and U2OS cells 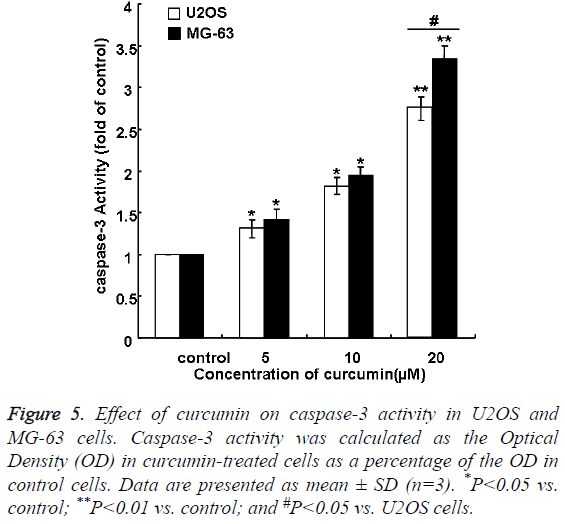 MG-63 cell is a human osteosarcoma cell line with a P53 gene mutation and is quite different from the U2OS cell line. The P53 gene is a tumor suppressor gene that can prevent cells from entering the S phase from the G1 phase, and can induce apoptosis of the cells. When the P53 gene has a mutation, the cell can lose the ability to monitor cell growth, differentiation and apoptosis, and can no longer repair damaged DNA. As a result, cancer is able to progress [7,8]. Because they have different genes, the signal transduction pathways of the MG-63 cell line and U2OS cell lines are different, which leads to different anti-apoptosis abilities of the cells. The degree of malignancy of the MG-63 cell line is significantly higher than that of the U2OS cell line. There are great differences in cell size, morphology, proliferation and migration ability of the two cell lines, which results in different types of osteosarcoma. MG-63 is the most commonly reported cell line. Because of the great differences in the biological behavior of different osteosarcoma cell lines, it is difficult to obtain the convincing results if only MG-63 cell line is studied. Therefore, we choose to use both the MG-63 and U2OS cell lines in our experiment to study the different reactions to curcumin.

According to our results, the MG-63 cell line is more sensitive to curcumin than the U2OS cell line is. This suggests that the P53 gene plays an important role in curcumin sensitivity, as the P53 gene is the main difference between the two cell lines. Our experiment shows the cell signal transduction pathway mediated by P53 is very important in the effect of curcumin on osteosarcoma, however, this is not the only signal transduction pathway. Curcumin inhibits osteosarcoma through multiple signaling pathways.

Curcumin has an anti-cancer effect on a variety of cancers. Curcumin can affect gene expression, transcription, proliferation and synthesis of the extracellular matrix, affecting a variety of molecular and cellular pathways [11,12]. Furthermore, curcumin can improve expression of tumor suppressor genes in tumor cell lines, including in osteosarcoma [13-15].

PARP is a DNA repair enzyme. Caspase is closely related to the eukaryotic cells, and involved in the regulation of cell apoptosis; while cleaved PARP is the common cleaved substrate of various caspases and is an important apoptosis marker. In many cell lines, cleaved PARP can be used as a tool for the detection of apoptosis [17].

Our experiment showed that the proliferation of osteosarcoma cell lines is significantly inhibited by curcumin, while the apoptosis is promoted, although the differences between the MG-63 and U2OS cell lines cannot be ignored. The inhibition effect of curcumin on osteosarcoma is in a concentration- and time-dependent manner. The differences are statistically significant. The Transwell tumor invasion assay showed that the invasion ability of osteosarcoma cell lines can also be inhibited by curcumin.

Curcumin is a widely used drug, and has a high metabolic rate. Curcumin is also insoluble in water, but soluble in organic solvents. When pH is greater than 7.2, curcumin is degraded. In human experiments, a very low concentration of curcumin was detected in human plasma after oral administration [22]. Even after oral absorption, curcumin can be degraded into glucuronide and sulfate after metabolism in the liver [23]. Therefore, further studies should be taken to find appropriate carriers of curcumin that are soluble in water and avoid degradation so that curcumin is released into the target region [21].

This study was supported by a grant from the Youth Foundation of the Second Hospital of Shandong University (No.Y2013010054).