Exosomes are extracellular vesicles that are released from cells and comprise microRNAs (miRNAs); however, little is known about the homogeneity of their contents. In this study, we assessed the homogeneity of exosomes by measuring the number of particles and miRNA copies released by pancreatic cancer PK-45H cells. miR-204-3p and miR-638 were abundant in the exosomes released by PK-45H cells and were present as one-to-several copies per 10,000 particles. The number of miR-638 copies released by PK-45H cells significantly declined following treatment with 10 μM GW4869, a neutral sphingomyelinase 2 (nSMase2) inhibitor. These findings suggest that exosomes form heterogeneous particle populations and nSMase2 may be involved in the exosomal uptake of miR-638.

Exosomes are extracellular vesicles (EVs) that are approximately 40-200 nm in diameter and are released by several cells. In 1983, Pan et al. reported the presence of exosomes as vesicles secreted by sheep reticulocytes [1]. Exosomes comprise a lipid bilayer and tetraspanin proteins on their membrane surfaces [2]. Among the tetraspanin protein family, CD63, CD9, and CD81 are known to be frequently localized at the exosomal surfaces and are therefore used as exosomal markers [2]. In addition, exosomes contain cytoskeletal proteins, Rab family proteins, heat shock proteins and enzymes, as well as proteins involved in signal transduction [2]. Valadi et al. reported that exosomes containing mRNAs and microRNAs (miRNAs) can be delivered to other cells [3]. Exosomal proteins and RNAs that have been reported are described in the ExoCarta database (http://exocarta.ludwig.edu.au) [4]. It has also been reported that neutral sphingomyelinase 2 (nSMase2) is involved in the secretion of exosomal miRNAs [5,6] and that GW4869, which is a known nSMase2 inhibitor, inhibits exosome secretion [5]; however, its effects on miRNA copy numbers remain unclear.

In addition, we examined the changes in the particle counts and miRNA copies released into the culture supernatants by PK-45H cells treated with GW4869.

PK-45H cells were plated on 10-cm dishes at a density of 2 × 105 cells per dish in the culture medium. This medium was discarded after 4 d, the dishes were washed thrice with serumfree RPMI1640 medium, and 10 ml of serum-free culture medium with 0, 1.0, 3.3, or 10 μM of GW4869 (Sigma- Aldrich, St. Louis, MO, USA), a nSMase2 inhibitor, was added to each dish. Cell culture media were collected after 48 h. Exosomes from the media were differentially centrifuged and purified using a previously reported procedure [7]. Exosomal pellets were suspended in Dulbecco’s phosphate buffered saline (D-PBS (-)) and the exosomal particles were measured using a NanoSight LM10 particle analyzer (NanoSight, Malvern, UK).

Exosomal miRNAs were labeled using a miRCURY LNA miRNA Hy5 Power labeling kit (Exiqon, Copenhagen, Denmark). Hy5-labeled miRNAs in a hybridization solution were incubated on a Toray 3D-Gene human miRNA oligo chip (Toray, Tokyo, Japan) at 32°C for 16 h using a hybridization oven. Next, hybridized microarray chips were washed in a wash buffer according to the manufacturer’s instructions, and the images of fluorescent signals were captured using a Toray 3D-Gene scanner 3000 (Toray).

cDNAs of miR-204-3p and miR-638 oligo RNA were diluted to produce standard curves, whereas miR-204-3p and miR-638 in the culture supernatants were reverse transcribed using TaqMan microRNA RT kits and the appropriate 5 × RT primers (both from Thermo Fisher Scientific) according to the manufacturer’s instructions. Subsequently, qPCR was performed using a FastStart TaqMan probe master kit (Roche Diagnostics, Basel, Switzerland), 20 × of each probe, and a StepOne Plus real-time PCR system (Thermo Fisher Scientific) at the following conditions: 10 min at 95°C, followed by 40 cycles at 95°C for 15 s and 60°C for 60 s. Copy numbers of each miRNA were calculated using the standard curve.

Exosomes have been suggested to form a heterogeneous population based on electron microscopic observations; however, the heterogeneity of exosome particles released from specific cells has not been demonstrated. In this study, we evaluated the heterogeneity of the exosome particles released from the PK-45H pancreatic cancer cells by measuring the particle numbers in supernatants and by quantifying the miRNA copy numbers. 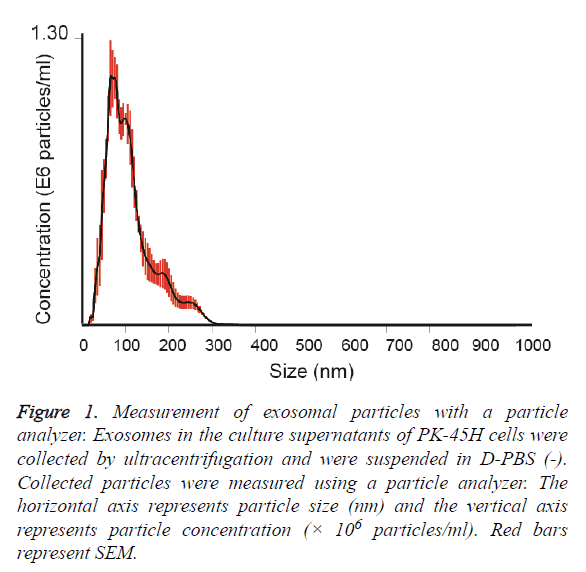 Furthermore, miRNA microarray analysis was performed to identify the miRNA species in the PK-45H-derived exosomes. The 20 most abundant miRNAs are presented in Figure 2, and among these, we focused on miR-204-3p and miR-638. 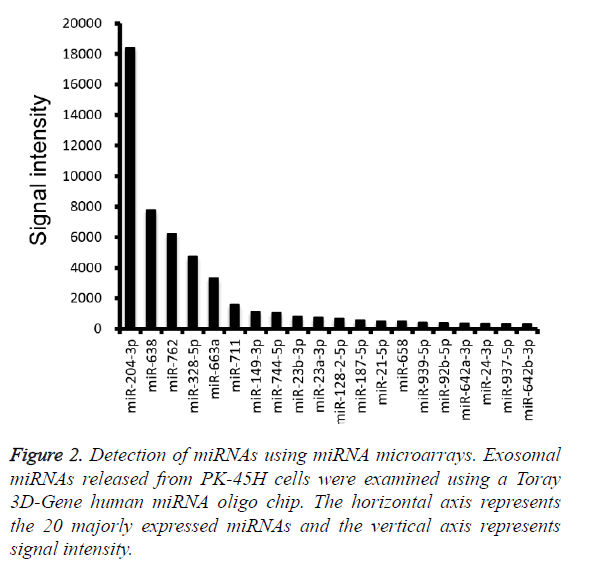 CDK2 inhibits differentiation and proliferation of leukemia cells [11], SOX2 suppresses invasion of colorectal cancer cells and SP2 suppresses cell proliferation of several digestive organ cancers [12,13]. These observations indicate that miR-204-3p and miR-638 are tumor-suppressing miRNAs and suggest that PK-45H cells may maintain homeostasis and function as cancer cells by expelling those miRNAs into the extracellular space.

To determine whether miR-204-3p and miR-638 are secreted by PK-45H cells via the nSMase2 pathway, we performed absolute quantification of miR-204-3p and miR-638 copy numbers using real-time PCR on the culture supernatants of PK-45H cells treated with 0, 1.0, 3.3, or 10 μM of GW4869 and calculated miR-204-3p and miR-638 copy numbers per 1 μl of supernatant. The secretion of miR-204-3p decreased with the increasing GW4869 concentration; however, this was not statistically significant (Figure 3a), whereas the secretion of miR-638 significantly decreased at 10 μM of GW4869 (Figure 3b). These findings suggest that nSMase2 is crucial in the extracellular secretion of miR-638. We previously reported that miR-638 secretion in the human hepatocellular cancer HuH-7 cells is also inhibited by treatment with GW4869 [14]. This new result is consistent with our previous work, suggesting that miR-638 is released from at least the pancreatic and hepatocellular cancer cells via the nSMase2 pathway. 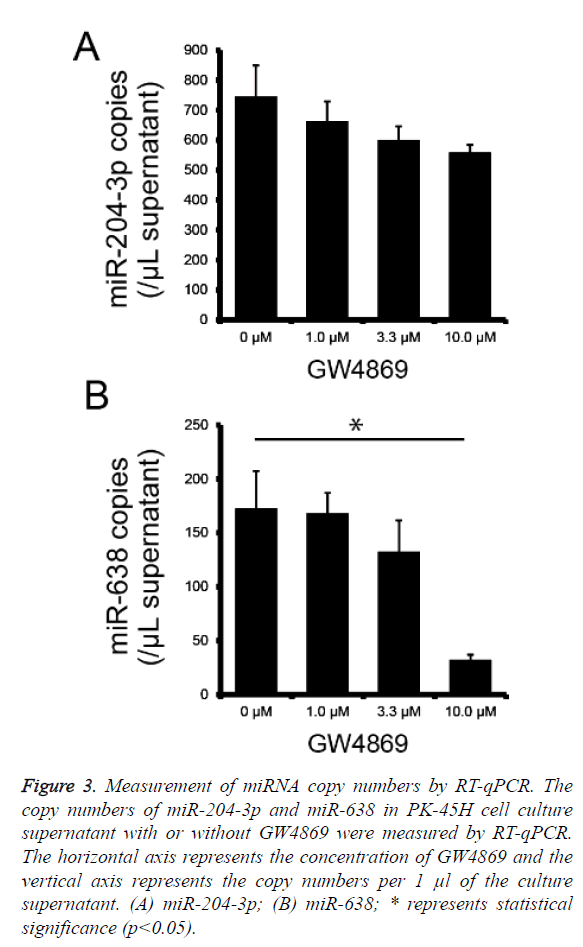 To assess the homogeneity of particles using the exosome counts and miR-204-3p and miR-638 copy numbers, we calculated the copy numbers per particle and examined the effects of GW4869 treatment. The particle counts did not change following treatment with GW4869 (Table 1), indicating that inhibition of the nSMase2 pathway does not influence particle release. miR-204-3p and miR-638 were present as oneto- several copies per 10,000 particles and miR-638 copy number decreased by treatment with 10 μM of GW4869 (Table 1). This suggests that nSMase2 is not involved in the particle formation but rather in the uptake of miR-638 into exosomes.

All authors declare that they have no conflict of interests or financial interests.

This work was supported in part by a Hirosaki University Institutional Research Grant for Young Scientists, and JSPS KAKENHI (no. 17H04761 and 17K19779).