Introduction: Exosomes are extracellular vesicles, which are released from most cells, involved in cell-tocell communication. Exosomes contain membrane and cytosolic components such as proteins, lipids, messenger Ribonucleic Acids (mRNAs), and microRNAs. However, the existence of other types of RNAs in these exosomes is unknown.

Results and Discussion: When signal intensities with values of more than 100 were selected, 6,218 NATs were detected in exosomes released from SW480 cells. Among them, NATs transcribed from transcription factor 7-like 1 genes, which had the lowest signal intensities, were detected using strandspecific reverse transcription-polymerase chain reaction. Thus, a large number of NATs as well as mRNAs and microRNAs are present in exosomes and are likely to be delivered to other cells.

Natural Antisense Transcripts (NATs) are Ribonucleic Acids (RNAs) that are transcribed from the opposite deoxynucleic acids (DNAs) strand of a gene and overlap in part with sense transcripts. NATs have been discovered using the analyses of human and mouse genome sequence project and full-length complementary DNAs (cDNAs). Kiyosawa et al. classified sense/antisense transcript pairs according to overlap patterns and protein or non-protein-coding patterns [1]. The functional annotation of the mammalian genome transcriptome sequencing consortium identified NATs for more than 70% of transcription units, most of which represent non-protein-coding RNAs [2]. A number of mechanisms have been proposed for NATs-mediated regulation of sense transcripts, including messenger RNAs (mRNAs). NATs localized in the nucleus are involved in transcriptional interference regulation, chromatin induction and DNA epigenetic changes, genomic imprinting, X-chromosome inactivation and alternative splicing [3-7]. NATs in the cytoplasm are involved in mRNA stability regulation, translational inhibition and endogenous small interfering RNA formation [8-10].

Recently, some researchers have investigated the role of NATs in several diseases. Differential NAT expressions were observed between cancerous tissues and the corresponding non-cancerous tissues obtained from colorectal and breast cancers [11,12]. In addition, Matsui et al. discovered that NATs of inducible nitric oxide synthase (iNOS), an important gene in inflammatory diseases, increased the stability of iNOS mRNA [8]. Furthermore, Faghihi et al. reported that NATs of beta-site amyloid precursor protein-cleaving enzyme 1 (BACE1) increased the stability of BACE1 mRNAs by forming RNA duplex [13]. Thus, it is suggested that NATs are associated with the development and progression of several diseases.

Exosomes are extracellular vesicles (approximately 40-200 nm in diameter) of endocytic origin released from cells and contain proteins, lipids, and nucleic acids (DNAs and RNAs) derived from the cell [14]. Valadi et al. discovered mRNAs and microRNAs inside exosomes released from mast cells, showing for the first time that mRNAs and microRNAs could be delivered from one cell to other cells [15]. ExoCarta (http://www.exocarta.org/) is a database of exosomal components identified by both published and unpublished studies [16]. At this time, proteins (4,563 entities), mRNAs (1,639 entities), and microRNAs (764 entities), and lipids (194 entities) have been registered in the database (release date: May 29, 2012). It was first identified NATs transcribed from leucine-rich repeatcontaining 24 (LRRC24), MDM2 proto-oncogene E3 ubiquitin protein ligase (MDM2), and cyclin-dependent kinase inhibitor 1A (CDKN1A) genes in exosomes released from three human colorectal cancer cells [17]. However, the types of exosomal NATs are unknown till date.

Collection of exosomes from culture supernatants

Isogen II (NipponGene, Tokyo, Japan) was used to isolate exosomal RNAs from exosome pellets. Exosomal RNAs were stored at -80°C until further use. The concentrations of RNAs extracted were examined using the Quant-iT RiboGreen RNA Reagent and Kit (ThermoFisher Scientific, DE, USA), according to the manufacturer’s instructions. In addition, the size of the exosomal RNA was confirmed using the Agilent 2100 Bioanalyzer and Agilent RNA 6000 Pico Kit (Agilent Technologies, Foster City, CA), according to the manufacturer’s instructions.

First-strand cDNAs from NATs were synthesized using exosomal RNAs (1 ng), RT primer, and AMV Reverse Transcriptase (Promega, Madison, WI) according to the procedure recommended by Promega. The mixtures were then incubated at 50°C for 60 min. The resulting cDNAs were incubated at 99°C for 5 min and at 37°C for 60 min with ribonuclease A to digest RNAs. The first-strand cDNAs were subjected to ordinary PCR using forward and reverse primers.

The detection of NATs by PCR was performed using firststrand cDNAs, FastStart Universal SYBR Green Master (Roche Diagnostics, Basel, Switzerland), and primer pairs. PCR analyses were performed using the StepOne Plus Real- Time PCR system (RT-PCR; Life Technologies, Carlsbad, CA, USA) for 1 min at 95°C followed by 40 cycles each of 95°C for 15 s and 60°C for 60 s, following the manufacturer’s instructions. The PCR products obtained above were electrophoresed using 4% agarose gels. The detection of amplified fragments was achieved by ethidium bromide staining using the ChemiDoc XRS (Bio-Rad) and the Quantity One software (Bio-Rad). 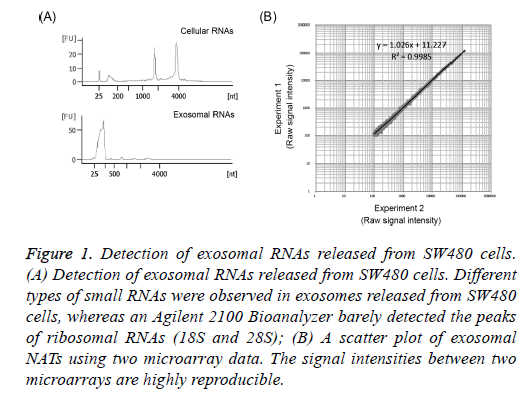 A high peak of small RNAs was detected in exosomal RNAs from SW480 cells (Figure 1A). Because NATs include RNAs of longer lengths, it is necessary to amplify exosomal RNAs for the microarray analysis of NATs. Dafforn et al. reported small amounts of RNA amplification method, Ribo-SPIA, which generates micrograms of labelled cDNAs from 5 ng total RNAs in 1 day for microarray analysis [22]. Here I identified NATs using amplified exosomal RNAs by Ribo- SPIA method and a sense/antisense custom microarray. In addition, the reproducibility of this experiment was investigated. When signal intensities with a value of more than 100 were selected, 6,218 NATs were detected in exosomes released from SW480 cells (Tables 1 and 2). The amplified exosomal RNAs prepared using the Ribo-SPIA procedure indicate an accurate amplification of gene expressions (R2=0.9985) (Figure 1B). This result indicates that a large number of NATs were observed in exosomes released from SW480 cells. This data (GEO accession: GSE68979) is registered in Gene Expression Omnibus (https://www.ncbi.nlm.nih.gov/geo/).

To validate these exosomal NATs as detected above, NATs transcribed from transcription factor 7-like 1 (TCF7L1) gene, which were found to have the lowest signal intensities, were investigated using strand-specific RT-PCR. It is difficult to specifically detect NATs by the reaction of reverse transcription using oligo dT primer or a random primer because a part of NATs has the complementary sequence within a region of mRNAs (Figure 2A). Therefore, I synthesized strand-specific cDNA derived from NATs of TCF7L1 using RT primer (Table 3). The obtained cDNAs were subjected to RT-PCR using a SYBR green reagent and amplified. These amplicons were electrophoresed using 4% agarose gel and stained with ethidium bromide. Band of TCF7L1 NATs detected using ultraviolet irradiation were 53 base pair (bp), respectively (Figure 2B). This indicates that NATs of TCF7L1 are present in exosomes released from SW480 cells, suggesting that other higher-intensity NATs detected using microarray analysis are also present in these exosomes. 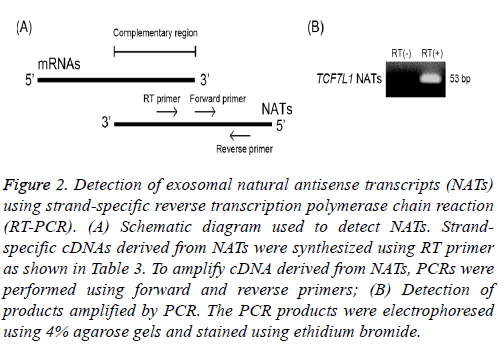 Recently, the analyses of exosomal components were performed using next-generation sequencers. Vojtech et al. identified exosomal piwi-RNAs (small RNAs (26-31 nt) expressed primarily in germline cells) and Y RNAs (small RNAs (83-112 nt) involved in alternative splicing and regulating translation) from human semen exosomes using the HiSeq 2000 sequencing system by Illumina [23]. Their exosomal RNAs may be also delivered to other cells and functions in target cells. It is necessary to elucidate whether a number of NATs identified in the present study are delivered to other cells and their functions in target cells. In conclusion, a large number of NATs are present in exosomes released from colorectal cancer cells, suggesting that these NATs are also delivered to other cells.

A large number of NATs are present in exosomes released from SW480 cells.

This work was supported in part by a Hirosaki University Institutional Research Grant for Young Scientists, JSPS KAKENHI (no. 23790613, 25670264, and 17K19779), a grant from the Suzuken Memorial Foundation (no. 11-076), a grant from the Takeda Science Foundation, and a grant from the Ministry of Education, Culture, Sports, Science and Technology of Japan (MEXT).