Exercise and pregnancy are known to induce physiological cardiac hypertrophy, and the molecular mechanisms have recently been revealed exercise-induced and pregnancy-induced cardiac hypertrophy. However, current understanding of the interaction of exercise and pregnancy on heart health is poorly understood. Our objectives were to study how exercise during pregnancy modifies pregnancy-induced cardiac hypertrophy and to determine gene expression patterns when two different physiological hypertrophic stimuli are concurrent. Female C57BL/6 mice were divided into three groups: non-pregnant sedentary control (C), sedentary pregnant (LP), and exercise during pregnant (ExP) groups. The mice in the ExP group were exercised voluntarily from gestational day 1 through gestational day 17, at which time they were sacrificed. Both the ExP and LP groups showed a significant increase in heart mass compared to the C group. Phosphorylation of Akt, mTOR, and p70S6K were all significantly increased in the hearts of the ExP group when compared to the C group. Phosphorylation of mTOR was different between the ExP and the LP groups. The ExP group displayed significant upregulation of α-myosin heavy chain compared to the LP group. In addition, the ExP group significantly downregulated Ccl2 (monocyte chemotactic protein) compared to the C group. Taken together, our results demonstrate that exercise during pregnancy initiated at day one of gestation may be beneficial by activating several cardiac protective genes.

Pregnancy and exercise promote cardiovascular remodeling [1]: pregnancy is associated with prolonged, but reversible, cardiac volume overload secondary to increased blood volume [2] and significant hormonal changes that together result in cardiac hypertrophy [3,4]. During pregnancy, cardiac output increases gradually and reaches a peak from the secondtrimester through term [5]. This increase in cardiac output is achieved by either gradual and substantial increases in heart rate and stroke volume or a fall in vascular resistance [5]. In addition to hemodynamic alterations during pregnancy, the levels of circulating progesterone gradually increase with advancing gestational age, which contributes to pregnancyinduced cardiac hypertrophy [4,6]. Similar to pregnancy, exercise training increases cardiac output. However, increased cardiac output in response to exercise training occurs mainly through increased stroke volume. In addition, both the volume overload and increased heart rate are intermittent in exercise rather than continuous as in pregnancy.

Akt and its downstream targets (i.e., GSK3, mTOR, and p70S6K) play an important role in physiological cardiac hypertrophy [4,8,10]. The active phosphorylated form of Akt has been shown to increase after swim training [9], voluntary wheel running [11], and during pregnancy [4,10] in mice. However, the time course of Akt activation differs between exercise and pregnancy stimulation. The level of phosphorylation of Akt is elevated in early exposure to exercise training and is attenuated gradually to the level of sedentary control [9,11]. In contrast, the phosphorylation of Akt is increased in midpregnancy and sustained until the late pregnancy stage [4]. The signaling pathways underlying cardiac hypertrophy when both physiological stimuli (i.e., pregnancy and exercise) are present are currently poorly understood.

Although pregnancy-induced cardiac hypertrophy is recognized as physiological, the number of women who develop heart problems during pregnancy is increasing [12,13]. Previous studies have shown that late pregnancy is associated with mild impairment of left ventricular diastolic [14] and systolic function [3,4]. In addition, the heart during late pregnancy is more vulnerable to ischemia/reperfusion injury [15] and could result in an adverse event such as peripartum cardiomyopathy [10,16]. Oxidative stress and the anti-angiogenic environment of late-pregnancy have, thus far, been suggested as mechanisms responsible for cardiac dysfunction and disease associated with pregnancy [10,16]. Exercise training, on the other hand, has been shown to increase cardiac angiogenesis [17], decrease inflammation [18], and increase antioxidant capacity [19]. These exercise adaptations may be critical for the hearts of late-pregnancy that is vulnerable to ischemia/reperfusion injury [15] and prone to oxidative stress, angiogenic imbalance, and inflammation [10,16,20]. The objectives of this study were to investigate how exercise during pregnancy modifies pregnancyinduced cardiac hypertrophy. In addition, gene expression that has been implicated in physiological and pathological cardiac hypertrophy was measured to characterize cardiac hypertrophy during pregnancy with exercise (i.e., angiogenesis, antioxidant, inflammation, and extracellular matrix).

Virgin female C57BL/6 mice were obtained from Charles River Laboratories at 10 weeks of age. Animals were housed in a temperature- and a light- controlled room with food and water available ad libitum throughout the study. All of the animals were handled and euthanatized under the approved protocol by the Texas Tech University Animal Care and Use Committee. Detail information for pregnancy, exercise protocol, and beneficial effects of maternal exercise on fetal heart adaptation was described in recent our publication [21]. Briefly, mice were divided into three groups ensuring no initial body weight differences among groups: non-pregnant sedentary control (C), sedentary pregnant (LP), and exercise during pregnant (ExP) groups. Mice were fasted for 4 hours in a sedentary cage before being euthanized in order to avoid the effects of acute exercise and feeding. Mice were euthanized by placing the mouse in an isoflurane-induction machine followed by cervical dislocation.

Effects of exercise during pregnancy

The phenotypes of pregnant dams, including the pattern of running activity, gestational weight gain, average fetal body weight, and the number of pubs were reported previous publication [21]. Briefly, the pattern of running activity was high in early pregnancy and gradually decreased to low levels after mid-pregnancy [21]. In agreement with previous studies [3,4], pregnancy did induce cardiac hypertrophy. Both absolute heart weight and heart weight (HW) normalized to tibia length (TL) (Figure 1), were significantly higher in the ExP and the LP groups when compared with the C group (p<0.05). The percent increase in HW/TL was 21.1 ± 1.9% in the ExP and 17.6 ± 4.5% in LP compared with C. However, the ExP group did not have significantly greater HW or HW/TL when compared with the LP group (p>0.05).

Akt signaling pathways in the heart from exercise during pregnancy 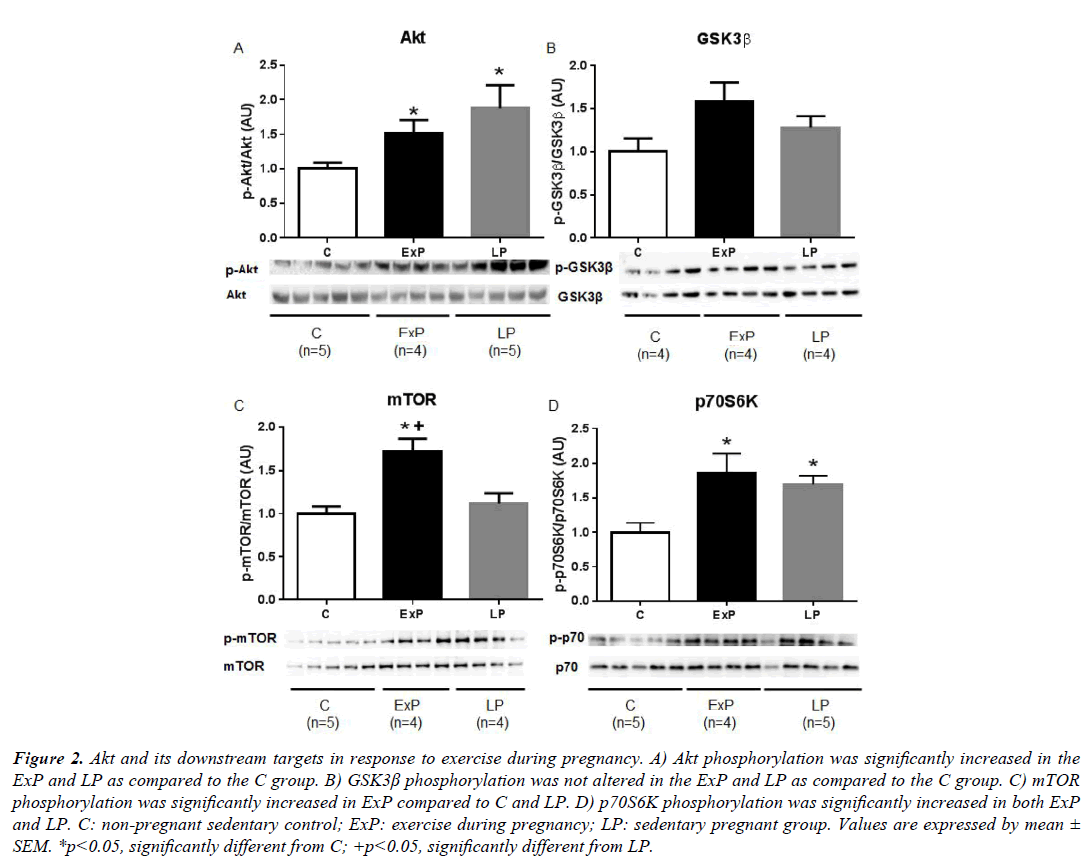 mRNA profiles of the hearts from exercise during pregnancy 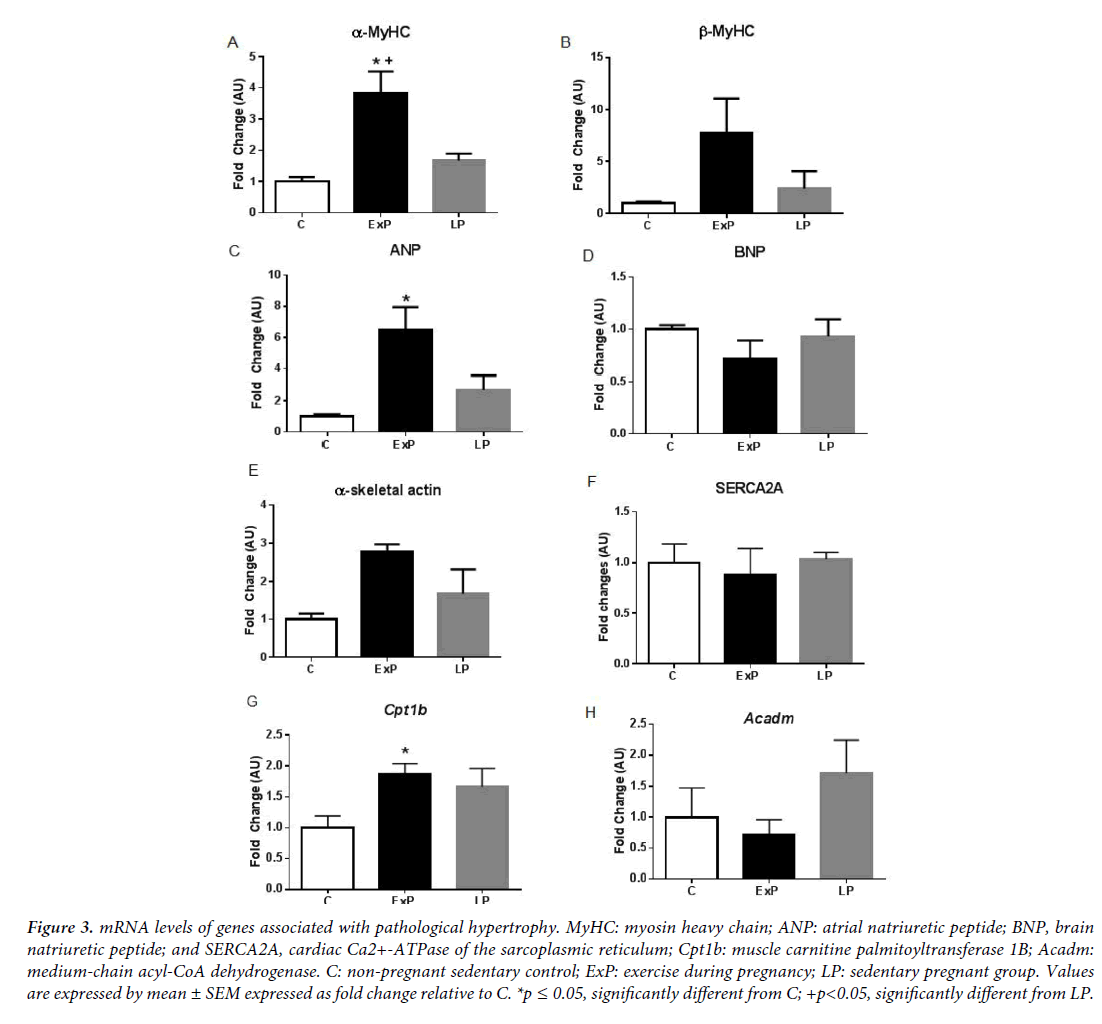 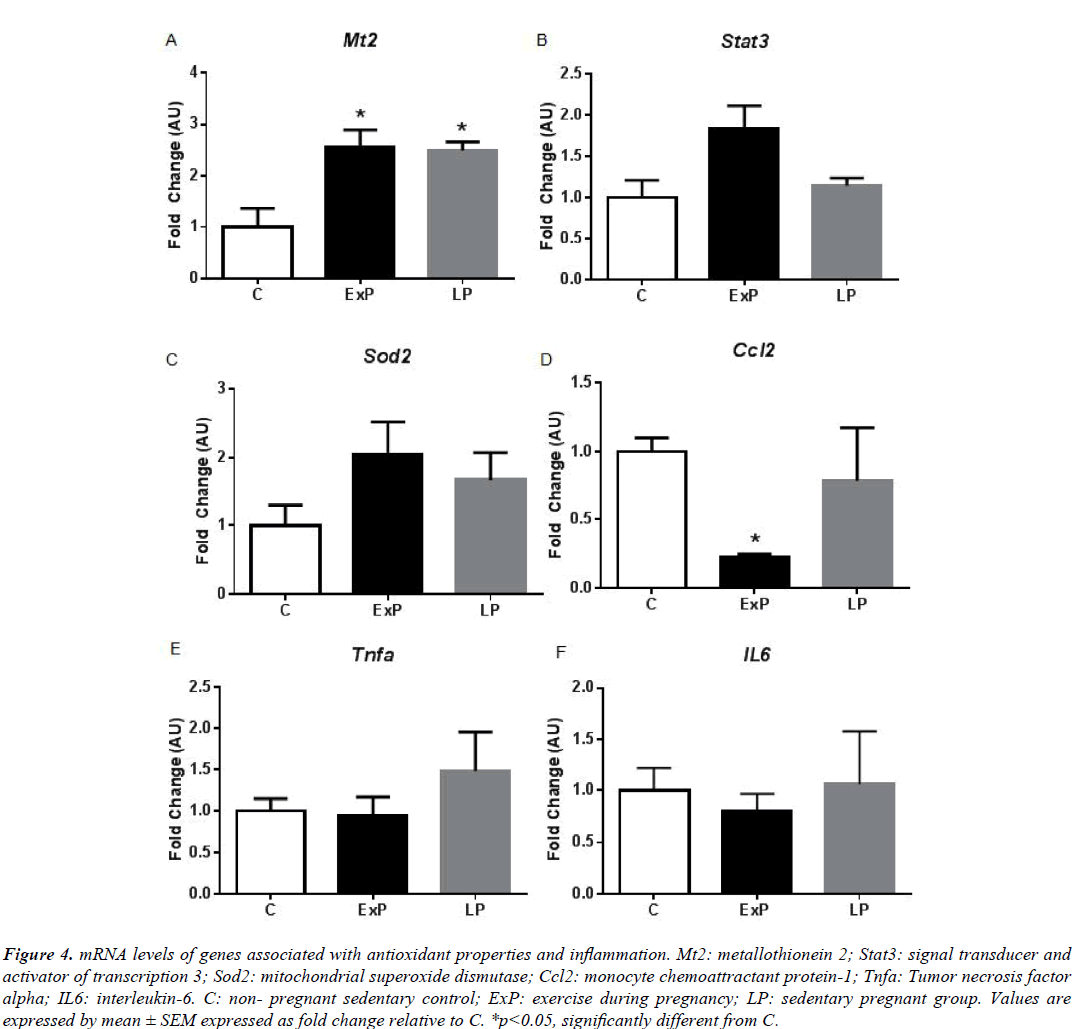 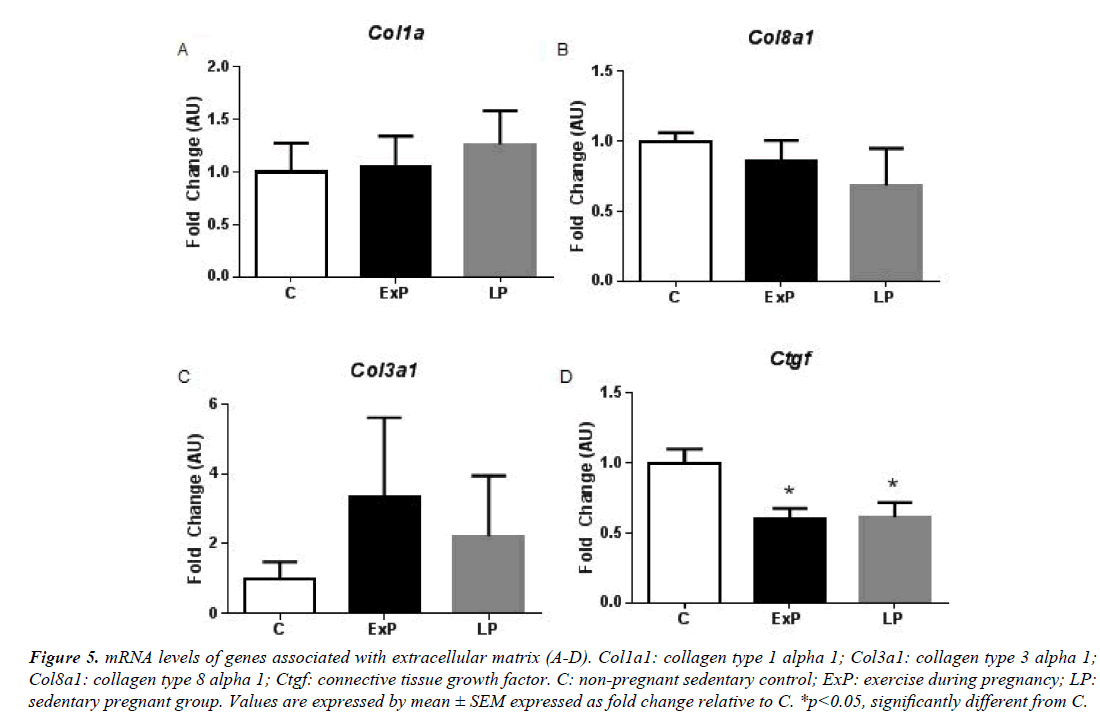 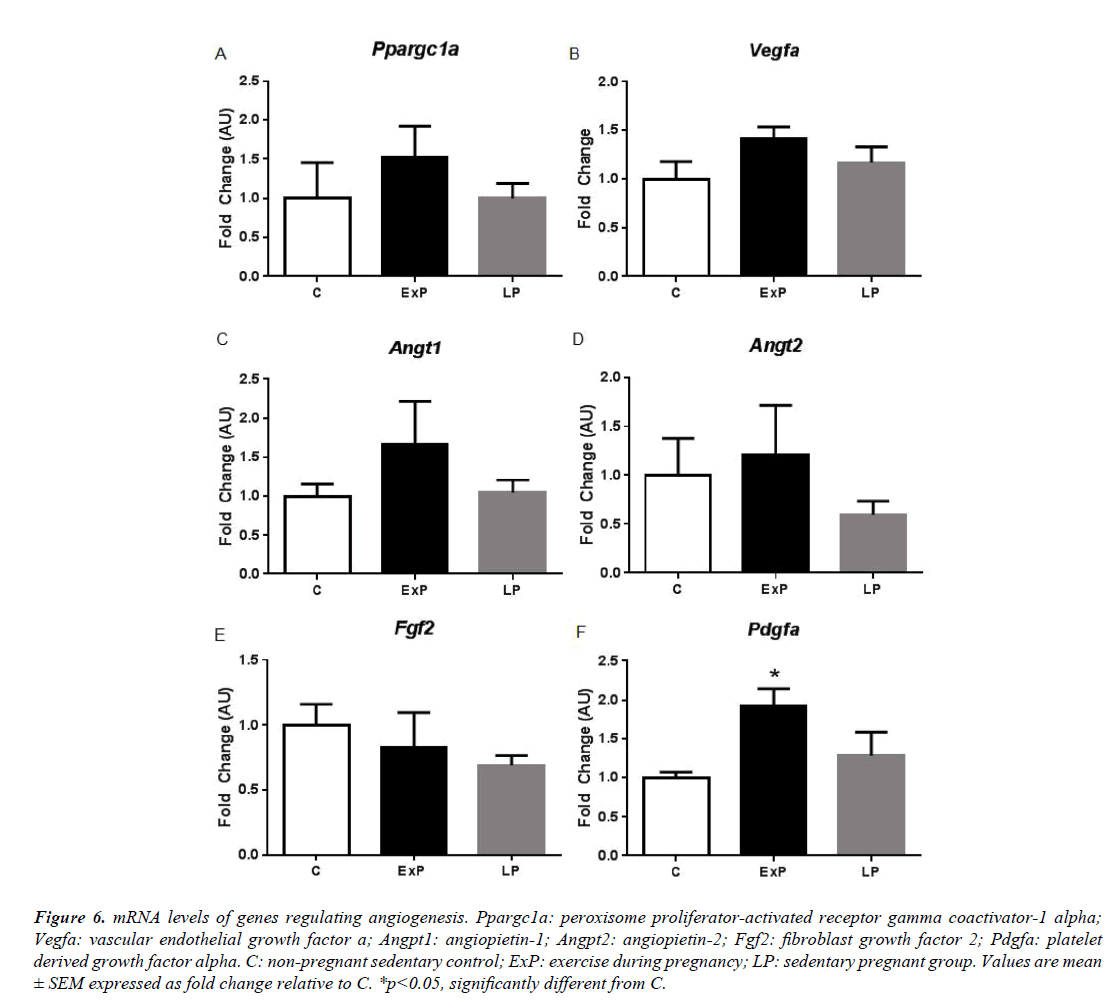 Exercise during pregnancy initiated at day one of gestation does not augment pregnancy-induced cardiac hypertrophy. Although it may not be sufficient enough to additionally activate signaling molecules and genes associated with pregnancy-induced cardiac hypertrophy, maternal exercise during pregnancy seems not be detrimental for mothers. The Akt signaling pathway was increased during pregnancy with or without the addition of gestational exercise. Interestingly, phosphorylation of mTOR is significantly different between the ExP and LP groups. Transcriptional profiles of the heart in response to exercise during pregnancy (Figures 3-6) displayed many of the features of physiological hypertrophy: 1) upregulation of α-MyHC and ANP (Figures 3A and 3C) which is highly correlated to an increase in contractile properties 2) upregulation of Cpt1b (Figure 3G), a rate-limiting enzyme in the mitochondria responsible for the transport of long chain fatty acid; and, 3) downregulation of Ctgf (Figure 5D), a connective tissue growth factor which suggests no induction of fibrosis in the heart of the ExP animals. However, most of the findings were not significantly different between ExP and LP groups, this may indicate that gestational exercise does not further stimulate the pregnancy-associated cardiac adaptation.

Induction of the fetal gene program is generally used to distinguish between physiological and pathological cardiac hypertrophy [1]. There are still confounding results regarding the fetal gene expression in response to exercise. Some studies report that exercise training increases α-MyHC [26,29] and ANP [30], which agreed with our results (Figure 3). However, others show no changes in these genes (see a comparison among studies in the review article published [24]). In addition, fibrosis is known to occur due to pathological stimuli and is used to differentiate between physiological and pathological hypertrophy [1]. Previous studies show that there is no induction of fibrosis in the heart in response to exercise training [9] and pregnancy [3,4], while hearts from pathological stimuli display an increase in fibrosis [9]. Our results (Figure 5) suggest that exercise during pregnancy does not upregulate mRNA levels of collagen, and significantly downregulates Ctgf in the ExP and LP animals. Thus, we regard that cardiac hypertrophy in response to exercise during pregnancy is not of a pathological nature and it does not appear to activate the pro-fibrotic genes. It has been suggested that increased cardiac inflammation, oxidative stress, and angiogenic imbalance during late pregnancy contribute to the development of pericardium cardiomyopathy [10,20]. In the transgenic mouse model, sustained activation of Akt with low STAT3 level accelerates cardiac inflammation and leads to cardiac myopathy during pregnancy by upregulating CCL2 mRNA and protein levels [20]. Thus, modification of these pathways could be used as means of intervention. Although we found significant downregulation of Ccl2 in ExP, the difference between ExP and LP were not significant.

There were several limitations to our study that should be explored further. We did not include an exercise only group because a large number of studies have already shown the molecular mechanism of exercise-induced cardiac hypertrophy. Therefore, it seemed wasteful to use mice for the information that is already known. Moreover, a previous study [22] demonstrated different gene expression profiles of cardiac hypertrophy in response to exercise-only and pregnancy-only stimulus [1]. Nonetheless, having an exercise control group may aid in making conclusions about exercise, pregnancy, and interaction effects. Next, most of the upregulated cardioprotective genes increased in the ExP as compared to the C, but not the LP. The volume of exercise dropped off significantly at mid-pregnancy, suggesting that adding a different gestational stage, such as mid-pregnancy, should be considered in the future study to provide invaluable insight into the concurrent effects of exercise training. Alternatively, as suggested by Platt et al. [31], exercise mode that can maintain the early gestational exercise volume in late pregnancy may help to activate cardio-protective pathways rather than relying on voluntary exercise since most pregnant mice and humans do not continue to exercise voluntarily during the late stage of pregnancy [32-34]. We did not fully investigate the role of Akt and its downstream targets on cardiac hypertrophy induced by exercise during pregnancy. Using a gain of function or loss of function approach, the signaling molecules should be tested in the future study.

In summary, we demonstrate that exercise during pregnancy initiated at day one of gestation is not detrimental for the heart, but rather beneficial by activating several crucial positive genes (antioxidant- and angiogenesis- related genes), as well as downregulating a pro-inflammatory gene (Ccl2). The American College of Obstetricians and Gynecologists (ACOG) recommends that pregnant women exercise regularly, even those who were previously sedentary [35]; however, some people still perceive exercise as risky. Our results suggest that voluntary exercise can be a beneficial behavior modification during pregnancy without causing negative effects on the pregnant mother or their fetuses [21]. In addition, our study can be used by practitioners to encourage their healthy pregnant patients to participate in exercise for their own health, as well as their developing offspring. Consequently, this study has clear implications for human cardiovascular health. In a future study, it would be interesting to investigate the effects of exercise on peripartum cardiomyopathy models described previously [20], and to measure how exercise modifies the genes (i.e., Ccl2, Stat3, Sod2, and Pgc1a) responsible for peripartum cardiomyopathy.