Evolutionary analysis of the antigenic determinant, glycosylation, and sialidase sites of neuraminidase from the human influenza A virus isolated in China from 1995 to 2012

Background: Improve the understanding of evaluative characteristics of the NA gene, NA protease active sites, and NA glycosylation sites in H1N1 virus isolated from China during 1995-2012.

Conclusions: Except for sialidase, some of the antigenic determinants and glycosylation sites from Chinese H1N1 influenza NA genes have changed in the past 20 y, which is related to the periodic outbreak in China.

Influenza A is one of the most common respiratory diseases. It has caused four pandemics in the past century; occurred in 1918 (Spanish, H1N1), 1957 (Asia, H2N2), 1968 (Hong Kong, H3N2), and 2009 (H1N1). These pandemics resulted in millions of deaths and considerable economic losses. The 2009 influenza outbreak, which was caused by a new strain of human influenza A (H1N1), was the first influenza pandemic in the 21st century. This novel virus spread worldwide and caused approximately 17,000 deaths at the beginning of 2010 [1-4]. This virus is no longer considered “novel,” but it is still circulating in many countries. An important reason for the periodic breakout is the variation in the virus structure and important sites.

On the surface of the H1N1 virus, there are two important antigens: hemagglutinin and Neuraminidase (NA). NA combines with sialic acid on the surface of infected cells, thus promotes the release of the virus from the infected cell membrane and prevents virus aggregation. These processes allow the virus to spread and enhance the infection. The active site on NA has highly conserved amino acids that are the key targets of anti-influenza drugs, such as oseltamivir (Tamiflu) [5,6]. Tamiflu-resistant cases have been reported in Canada, Denmark, Japan, and China during 2009-2012 [7]. These reports indicate that the NA gene of the H1N1 virus has mutated. Asia, particularly China, is believed to be the source of pandemic influenza. Investigating the evolutionary characteristics and profiles of Chinese influenza A has been highly important. In this study, we analyse the evolution of the NA gene, NA protease active sites, and NA glycosylation sites in the H1N1 virus to reveal its future evolutionary trends and provide novel insights into NA critical site-based drug design for the development of novel therapeutics.

A total of 200 NA gene and protein sequences of human H1N1 strains from 1995-2012 were randomly downloaded from National Center for Biotechnology Information’s (NCBI) Influenza Virus Resource (http://www.ncbi.nlm.nih.gov/ genomes/FLU/FLU.html). Fifty NA sequences with H275Y substitutions, of which 11 are identical to the 200 sequences, and were also randomly selected from the Virus Resource. In total, 114 and 125 strains isolated from China and other countries (including two vaccine strains recommended by the World Health Organization, namely, A/California/07/2009 and A/Brisbane/59/2007) were analysed respectively in this study.

Phylogenetic analyses were conducted with Mega5.05. Evolutionary history was inferred through the neighbor joining method. An optimal tree with the sum of branch lengths equal to 0.44414677 was created. The tree was drawn with scales and branch lengths in the same units as those of the evolutionary distances were utilized to construct the phylogenetic tree. Evolutionary distances were computed with the maximum composite likelihood method and were expressed in the units of the number of base substitutions per site. The first, second, third, and noncoding codon positions were all included. All positions containing gaps and missing data were eliminated from the dataset (i.e., complete deletion option). A total of 1406 positions were included in the final dataset.

Prediction of the 3D structure of the NA protein

To investigate whether glycosylation site composition influences the 3D structure of the NA protein, we used two representative strains, namely, Beijing-2009 (A/Beijing/ 3/2009, GQ225383) and Taiwan-1999 (A/Taiwan/5072/1999, CY040140), to construct a 3D model with the software SWISS-MODEL [8] (available through the web interface at http://swissmodel.expasy.org/). Visual diagrams were constructed with the program Visual Molecular Dynamics version 1.8.6, which is available for free at http:// www.ks.uiuc.edu/Research/vmd/ [9].

Comparison of H1N1 NA sequences isolated from China and other countries

The sequences of the NA gene of A/H1N1 influenza virus strains were downloaded from the NCBI database. A total of 100 H1N1 strains from different provinces/cities of China and 100 H1N1 strains isolated from other countries during 1995-2012 were analysed. The phylogenetic trees can be divided into two distinct branches. One branch consists of the 1995-2008 strains with A/Brisbane/59/2007; it is elongated upward and clustered by the year of isolation, not by area or country. This branch shows the strains clustered chronologically. All of the 2009-2012 novel H1N1 from different countries are clustered in another branch with A/ California/07/2009, which varies considerably from the past influenza NA genes that circulated in the population, except for four strains in 2009 (A/New York/3442/2009, A/Hong Kong/ 15273/2009, A/Hong Kong/25119/2009, and A/Hong Kong/ 46035/2009). Interestingly, compared with A/California/ 07/2009 at the AA level, all of the four strains showed H275Y mutation.

NA N-glycosylation site substitutions: We obtained series scores for the potential glycosites by submitting the alignment files to a prediction server. In consideration of experimental errors, occasional glycosites that may result from the genomic sequencing or translated by different genetic codes were excluded [13].

Table 1. Distribution of the potential glycosylation sites in neuraminidase that was isolated from China and other countries during 1995-2012.

Comparison of NA-resistant strains from China and other countries 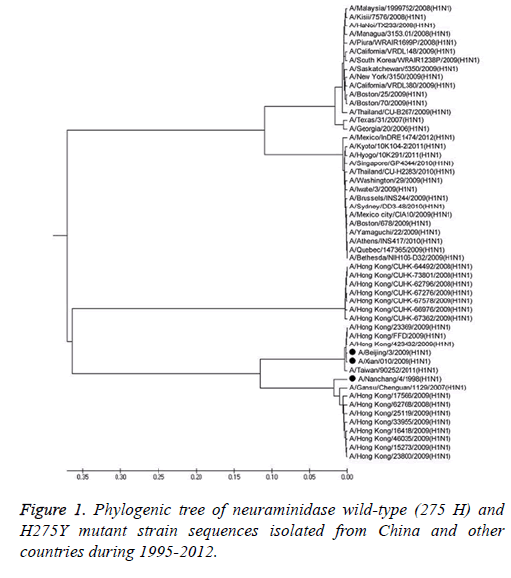 Figure 1: Phylogenic tree of neuraminidase wild-type (275 H) and H275Y mutant strain sequences isolated from China and other countries during 1995-2012. 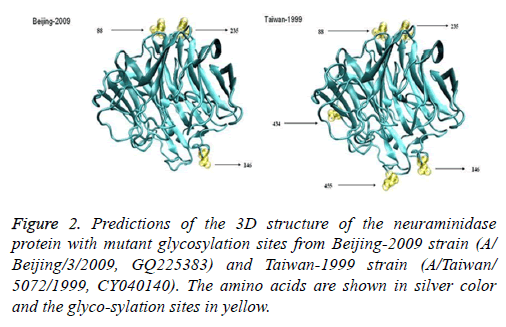 The eight sialidase activity sites and 11 auxiliary centers were consistent and had a pocket-like structure. This structure was located on the surface of the internal H275Y resistance site locus. No obvious difference in the structure of the sialidase auxiliary and sialidase centers was observed between the H275Y resistant (A/Gansu/Chenguan/1129/2007 (H1N1)) and wild-type strains (A/Nanchang/4/1998 (H1N1)) or between the novel 2009 resistant (A/Hong Kong/17566/2009 (H1N1)) and wild-type strains (A/Beijing/3/2009 (H1N1)). However, the 2009 novel and resistant strains had clear structural differences (Figure 3). 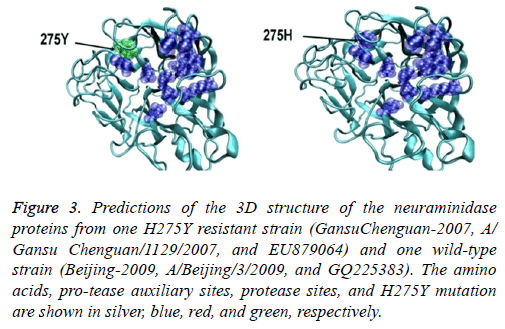 N248D substitution can change the central region of the antibody recognition site [14], and whether changes in these three sites (222, 249, and 344), which are in the vicinity of the catalytic site, affect the catalytic site and efficiency of the enzyme remains unknown. V321I dis-torts the hydrophobic pockets and affects residues in the NA active site [19].

Moreover, the NA amino acid region between 426 and 457 is essential for stability maintenance at a low pH and that alterations at positions 430, 432, 434, and 455 (N1 numbering) or deletion at position 435 in the NA can affect stability at a low pH. Increased stability at a low pH allows the influenza virus to replicate rapidly [20]. Overall, some of the mutation sites in NA clearly influence its structure and function. The virus undergoes frequent point mutations in response to drugs and immune system pressure. Thus, further studies on the effect of the virulence of these sites and whether these sites are related to the pandemic influenza H1N1 in different years may help guide the monitoring of new species and changes in virulence and transmissibility.

Nineteen NA sialidase active and auxiliary center sites were conserved in different years at different countries. However, we observed several strains that contained the H275Y substation. These sites are highly conserved because they are directly or indirectly involved in the activity of the enzyme. H275Y is the most widely acknowledged substitution that is responsible for resistance to oseltamivir; the mutant reduces the affinity for the substrates compared with species lacking the substitution, although it has no effect on susceptibility to zanamivir or adamantine [21,22]. The mutation rate of H275Y in our research was 5.5% (11/200). In China, this substitution was observed in only one strain, that is, A/Gansu/Chenguan/ 1129/2007, which was isolated before 2008. However, five novel H1N1 strains isolated from Hong Kong and Taiwan during 2009-2012 were found to carry this mutation. Amino acid 275, which is located on the surface of NA, is important for interaction with antiviral drugs. The H275Y mutation did not change the 3D structure of the NA protein. The NA amino acid substitutions may have affected the drug resistance to NA inhibitors. Studies have shown that the H275Y mutant causes 1,466-fold reduced sensitivity to Tamiflu [21,23]. The other site mutations, such as E119K and D151N, do not have a clear relationship to drug sensitivity because they are observed at a low frequency. Although the influenza virus resource reported that Tamiflu-resistant strains have been found in Denmark, Japan, Hong Kong, and China [24,25], their proportion is approximately 11.55% (1226/10612), which would not significantly affect public health and safety. However, the seasonal influenza and the new influenza (H1N1) co-circulate in the population and can significantly increase the risk of a recombinant strain emerging. Therefore, changes in the virus should be closely monitored, and the occurrence and spread of resistant strains should be pre-vented.

The distribution of the glycosylation sites is consistent with that in the new 2009 influenza A H1N1. The sites are located at 88 NSS, 146 NGT, and 235 NGS. Compared with the seasonal H1N1 prior to 2009, four sites, namely, 44 (NHT), 70 (NNT), 434 (NTT), and 455 (NWS), and three additional sites, namely, 50 (NQS), 58 (NNT), and 63 (NQT), were observed. Glycosylation sites 88, 146, 235, and 455 are located on the surface of the protein, and they are related to host adaptation, transmissibility, and pathogenicity. These highly conserved glyco-sylation sites are important for the NA protein to maintain its structure and physiological function [26]. Many studies both in silico or through actual experiments have indicated that an increase or decrease in glycosylation sites or glycosylation migration influences receptor binding, antigenic site blocking, transfaunation, pathogenicity and so on [13,27-32]. However, further studies on the possible role of glycosyl modification of NA are required.

In conclusion, the evolutionary features of the Chinese H1N1 NA gene are as follows.

(1) The 2009 pandemic influenza A/H1N1 NA genes were similar in viruses in different countries worldwide and varied in the seasonal virus prior to 2009.

(2) The strains isolated during 1995-2008 had seven highly conserved glycosylation sites, with the exception of 44 (NHT), 50 (NQS), and 70 (NNT). The strains from 2009 had four sites only, of which three sites (88 NSS, 146 NGT, and 235 NGS) were identical to the seasonal H1N1 gene. This similarity indicates that these three stable sites are important for the virus’s structure. Additionally, three sites (50 NQS, 58 NST, and 63 NHT) were different. Four sites (44 NHT, 434 NTT, 455 NWS, and 70 NNT) were unimportant for adaptation to the host, transmissibility, or pathogenicity. Overall, 19 NA sialidase activity and auxiliary center sites were highly conserved over the past 18 y. H275Y is the most widely acknowledged substitution that is responsible for resistance to oseltamivir, but its prevalence rate is very low, and it does not pose a threat to public health.

This study described the genetic evolution of NA from human influenza A/H1N1 viruses during 1995-2012 in China. The results are expected to be beneficial for early warning and laboratory diagnosis of influenza H1N1 pandemics. Although H1N1 influenza appeared in the low epidemic period, it still underwent “antigenic shift” and “antigenic drift” for seasonal and novel co-circulation in the population. Therefore, virological surveillance, particularly the monitoring of Tamiflu-resistant strains and molecular evolution of key sites, should be strengthened.