#These authors contributed equally to this paper

Past studies have shown that cerebral autoregulation is a physiologic process that maintains blood flow at an appropriate level. Impairment of cerebral autoregulation during pregnancy may contribute to further diseases like preeclampsia and eclampsia. However, little is known about the normative cerebrovascular adaptation during pregnancy. Two photon microscopy has become an important tool for living brain function research due to its deeper detection, higher resolution, lower photodamage compared to wide-field and confocal microscopy. In the present study we observed adaptive changes in the blood flow and vessel diameter from prepregnancy to late pregnancy by in vivo two-photon imaging. 12 female C57 mice were randomly divided into four groups: non-pregnancy, early-pregnancy, middlepregnancy, late pregnancy. A thinned skull window was made over the motor cortex. One day later, Rhodamin B was injected intraperitoneally to label the vessels 15 minutes before beginning the imaging experiments. The animal was anesthetized and placed under two photon microscope to observe; blood flow signal pictures were taken using line-scan and analysed by blood flow analysis software programmed. The blood flow velocity of arteriovenous vessels and capillaries increased significantly in middle and late pregnancy compared to non-pregnancy and early-pregnancy; vascular diameters in middle and late pregnancy also became bigger than that in non-pregnancy and early-pregnancy. Both the blood flow velocity and diameter of cortical micro vessels increased significantly from nonpregnancy and early-pregnancy to middle and late pregnancy. Such results demonstrated a progressive cerebrovascular adaptation from prepregnancy to late pregnancy.

Normal pregnancy is a state of physiological adaptation [1]. Changes in cardiovascular, renal, immune, and endocrine systems during pregnancy are necessary and important for maternal health, normal growth and development of the fetalplacenta unit [2]. Systemically, pregnancy is a high volume, low resistance state characterized by a large increase in cardiac output response to high levels of circulating hormones during the course of gestation [3]; Plasma volume also increases 40%-50% during pregnancy [4]. In addition, organs like uterus, kidney and heart undergo substantial increases in blood flow during pregnancy [5]. However, the adaptation of the brain to pregnancy is distinct from other organs. The brain is an organ of high metabolic demand that consumes 20% of the body’s oxygen at rest, despite comprising only 2% of body weight [6]. Importantly, the brain has a relatively narrow capacity to tolerate changes in ion and water balance, and blood flow [6]. So the adaptation of the cerebral circulation during pregnancy appears to be to maintain a constant blood supply and the relative intolerance to increased blood volume. But the cerebral circulation is not unchanged during pregnancy.

Presently, the adaptations of the cerebral circulation to pregnancy and the related mechanism have not been understood clearly. It has been difficult to assess how CBF change during pregnancy in human. In recent studies, several non-invasive techniques such as Transcranial Doppler (TCD) ultrasound, Computed Tomography Perfusion (CTP), Magnetic Resonance Imaging (MRI), have been widely employed in patients to measure cerebral blood flow [7]. However, changes in blood flow calculated from TCD studies may not accurately reflect CBF due to the lack of information about vessel diameter [8]. In addition, all the above techniques have been rarely used to study cerebral hemodynamics in experimental animals. Due to the nonlinear optical effects of two-photon absorption in biological tissue, the two photon microscopy technique allowed researchers to observe single vessels in the cerebral cortex of living brain [9]. Two photon imaging has a deeper penetration over several hundred micrometers of depth, higher resolution, more concentrated space focus, less tissue damage compared to laser confocal microscope and other conventional single photon microscopes.

During pregnancy, approximately 2-8% of women have some form of hypertensive disorder such as preeclampsia [10]. Preeclampsia accounts for 16%-38% of all maternal deaths [11], Clinical imaging of preeclampsia demonstrated brain edema and cerebrovascular hemorrhage [12-15], the cerebral circulation has been suggested to play a central role in neurological complications of preeclampsia, and thus understanding how pregnancy and preeclampsia affect the cerebrovasculature is of interest [15,16]. Therefore, preeclampsia is thought to be a hypertensive encephalopathy. Investigating how cerebral hemodynamics change during pregnancy including microvascular structure, may provide important mechanisms underlying preeclampsia. Understanding how normal pregnancy affects the cerebral vascular environment is important for neurological conditions such as preeclampisa. Therefore, the present study aimed to investigate dynamic changes in the blood flow and vessel diameter from prepregnancy to late pregnancy by in vivo twophoton imaging.

A total of 12 female adult c57 mice (weight 20-22 g, 10-12 weeks) were obtained from experimental animal center of southern medical university (Guangzhou, Guangdong, China), the mice were acclimatized to the laboratory conditions for 1 week prior to the start of the experiments. Each mouse used in all the pregnancy groups was separately mated overnight. Day 0 of pregnancy was defined as the day when a sperm plug was found in a vaginal smear [17]. Animals were grouped as following: the non-pregnant group (n=3), early-pregnant group (n=3, day=3), middle-pregnant group (n=3, day=10), late-- pregnant group (n=3, day=17). Experimental protocols were approved by the Committee on the Ethics of Animal Experiments of Guangzhou Medical University (Permit Number: 2012-50) in accordance with the NIH Guidelines (NIH Publications No. 8023, revised 1978) for the Care and Use of Laboratory Animals. All efforts were made to minimize the number of animals used as well as their suffering.

To make a cranial window for imaging, mice were anaesthetized with 1.5% tribromoethanol (20 ml/kg, i.p.), the most part of brain skin was removed to expose the skull. The position of window was 2.0 mm posterior to the bregma and 2.0 mm lateral from the middle line. At the beginning, a micro drill (Ideal, Cat# SN3150) was used to thin a 1-2 mm diameter circular skull region, after removing the majority of the spongy bone, remaining concentric cavities within the bone can usually be seen under the dissecting microscope, indicating that drilling is approaching the internal compact bone layer. At this stage, skull thickness should still be more than 50 μm. Then a 10# surgical blade was used to slowly and carefully thin the skull until the blood vessels on the cerebral cortex were clearly visible under a light microscope (a ~20 μm preparation). During the whole thinning process, 0.9% physiological saline was added to the skull surface from time to time to reduce heat. After the thinned skull became thoroughly dry, a small drop of thin glue (TED PELLA, INC. Cat#1003) was applied and a small piece of cover glass (about 1-1.5 × 1-1.5 mm size) was glued onto the thinned skull. The remaining area of the skull was covered with a layer of the thin glue. The mice were allowed to recover for least 1 day before imaging.

The mice were anaesthetized with 1.5% tribromoethanol (20 ml/kg, i.p.) and received an intraperitoneal injection of 0.1 ml Rhodamin B sothiocyanate-dextran solution (70 KDa, 3 mg/ml in distill water) at least 15 min before imaging to label the blood plasma. The mice were placed on a head holder (Narishigie, Cat#SG-4N) and the head position was adjusted so that the cortical surface was in a horizontal position to the microscope objective. The mice were placed onto of a healing pad to maintain the body temperature at 37°C, and imaging was made with a two photon microscopy. We used 870 nm excitation wavelength (Maitai DeepSee, 10 RP52-2, Newport, USA). A 20X objective lens was used to image individual blood vessels and take line scan images along with the central axis of a vessel at 3X optical zoom. Each session of line scan consisted 5000 lines. The line scan parameters were automatically recorded in the ZEN software.

A program in MatLab written by Dr Xiao Ming Jin and his student was used for calculating the velocity of Red Blood Cells (RBC) in cerebral blood vessels according to the line scan parameters. The vessel diameter was measured by NIH Image J.

A one-way Analysis of Variance (ANOVA) was used to compare the average values between the different groups, which was followed by an appropriate Least Significant Difference (LSD) post hoc test (homogeneity test of variance is neat) or else Dunnett's test (homogeneity test of variance is not neat). Values were presented as Mean ± SE and statistical significance was denoted as P<0.05. 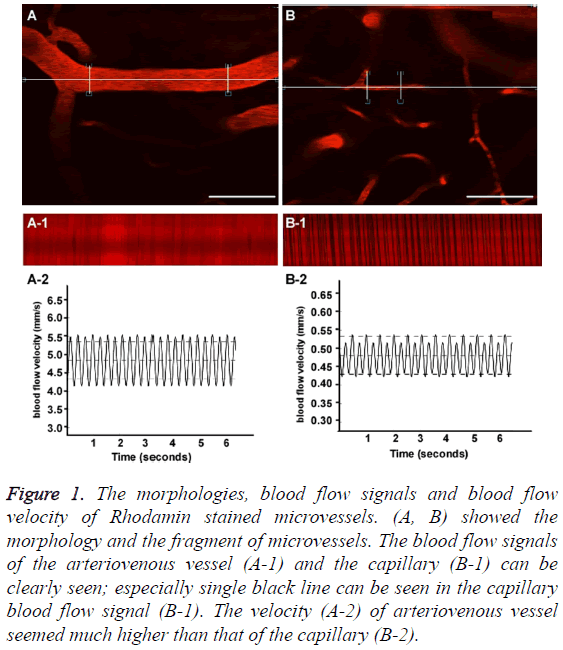 Changes in blood flow velocity from non-pregnancy to late-pregnancy 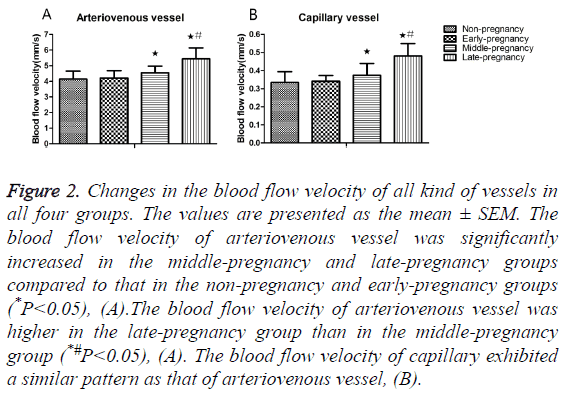 Changes in morphology of vessels from nonpregnancy to late-pregnancy 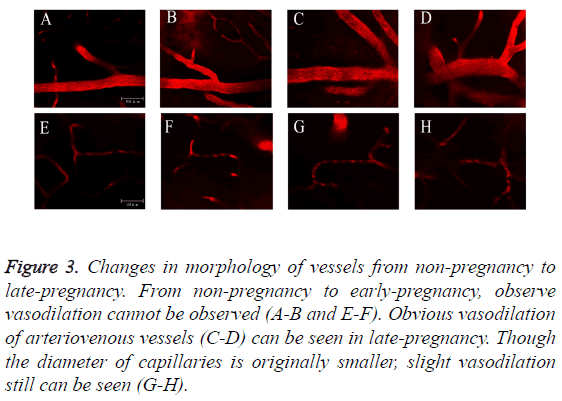 Changes in vessel diameter from non-pregnancy to late-pregnancy 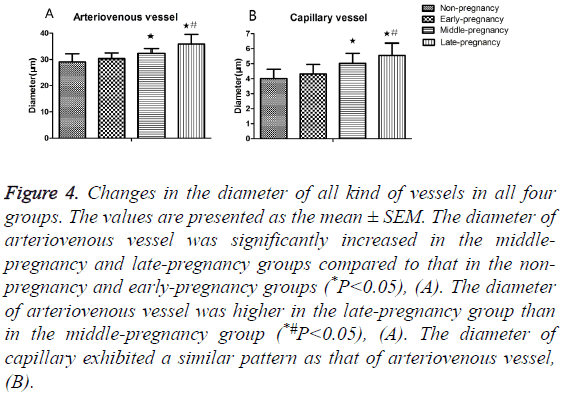 During pregnancy, there is a large increase in cardiac output and plasma volume, the uterine blood flow in late-gestation increased 10-fold over the non-pregnancy; but the brain is enclosed in a rigid skull, dramatic increase in cerebral blood flow could result in detrimentally increased intracranial pressure that can cause serious neurological symptoms, brain edema, cerebral hemorrhage and even death. So the magnitude by which cerebral blood flow change needs to be assessed accurately.

Using dual-beam angle-independent digital Doppler ultrasound, Ori et al. found that a maximum increase of 20% in the maternal blood flow of the Internal Carotid Artery (ICA) during the course of pregnancy compared to the nonpregnant baseline, such increase is associated with moderate increase in ICA diameter [18]. Another study showed 8.1% increase in cerebral hemispheric blood flow during the first trimester by using Single-Photon Emission Computerized Tomography (SPECT) before and 6 weeks after pregnancy termination [19]. Our results are in accordance with these reports.

The adaptation of cerebral circulation during pregnancy is related to the vasodilatory effects of Vascular Endothelial Growth Factor (VEGF), estrogens and other circulating factors [18,20]. Rusterholz and Aagaard-Tillery et al. proposed that hormones production including growth factors, cytokines increases significantly throughout pregnancy, reaching a peak in late gestation [2,21]. VEGF is one of the most important growth factors for successful pregnancy, it has been recognized as having a role in angiogenesis, vascular growth, endothelial cell survival, and vasodilation through complex interaction of VEGF with its receptors [22,23]. In the uterine circulation and cerebral veins, VEGF expression is higher than the nonpregnant condition [24,25]. Estrogen (ER) may also promote vasodilation during pregnancy; ER expression in endothelial and vascular smooth muscle layers of the aorta and mesenteric artery increased during pregnancy [26]. The related mechanisms for ER mediated vasodilation may be through inhibition of Ca2+ entry into vascular smooth muscle and increasing NO formation by increasing Ca2+ activated endothelial NOS expression or by increasing substrate availability for NO formation [27,28].

Our previous studies has proposed that normal pregnancy lowered seizure threshold [29,30], one possible mechanism was that mild systemic inflammation might cause neuroinflammation which could increase neuronal excitability during pregnancy [1,29-32]. Another possible mechanism may be related to cerebral blood flow autoregulation breakthrough. When the extent by which blood flow changed was beyond the scope of brain autoregulation during pregnancy, brain blood barrier would be disrupted and then caused cerebral edema formation. Clinical reports have shown that 93% of eclamptic women had cerebral vasogenic edema in diffusion-weighted MRI studies [33]. The present study demonstrated that in latepregnancy the blood velocity increased by 8%-30% compared with that in non-pregnancy. Such changed magnitude of blood flow during pregnancy can served as a reference to assess whether the brain blood barrier is intact and the possibility of eclampsia-like seizures.

Different from clinical imaging techniques, the application of two photon imaging in this study helped us to obtain highresolution images of microvasculature of the cortex in vivo, the diameter and blood flow velocity of each microvessel can be exactly measured. The present findings also provided some basis in investigating how microvascular environment change in preeclampsia and eclampsia which is a leading cause of maternal morbidity and mortality worldwide [34]. However, the CBF changes in preeclampsia and eclampsia is not clear. Since molecular transport across the blood-brain barrier mainly occurs in the microvasculature (especially the capillaries), all the vessels play an important role in the metabolism, energetics, and functionality of the cortex [35]. Further studies needed to be performed to investigate changes in the diameter and blood flow velocity of each microvessel under pathological conditions such as preeclampsia and eclampsia.