Evaluation the effect of metformin on proliferation, neurotrophic expression and antioxidant activity of mesenchymal stem cells

Metformin is considered cheap, safe and efficient medication worldwide, which is used as a first-line treatment for type 2 diabetes, has exhibited great interest for its potential antiaging properties. There is increasing evidence that metformin can be used in a variety of therapeutic conditions due to its biological effect. Much attention has been paid to improving culture conditions, increasing the capacity and capability of Mesenchymal Stem Cells (MSCs). In this study, the viability and cell proliferation rate, antioxidant enzyme activity‚ and expression of neurotrophic genes at passage 3 of metformin-treated rat Bone marrow Mesenchymal Stem Cells (BMSCs) were evaluated.

The results of this study indicate that the proliferation rate by BrdU markers at 5 and 15 μM metformin showed a significant increase compared to control groups (P<0.5). Gene expression density of neurotrophic factors (NFs) showed that, there were significant differences between MSCs treatment groups and control group (P<0.5). Also, metformin-treated cell groups showed a higher antioxidant capacity than the control group. Metformin may be suggested as a pre-therapist to strengthen mesenchymal stem cells before transplantation for the treatment of neurodegenerative diseases.

Metformin is a considered cheap, safe and efficient medication worldwide, which is used as a first-line treatment for type 2 diabetes, has exhibited great interest for its potential antiaging properties [1]. There is increasing evidence that metformin can be used in a variety of therapeutic conditions due to its biological effect [2]. While metformin is mainly used for the treatment of diabetes, numerous studies have shown that it may have further application in anticancer and antiaging therapies [3]. Several studies have shown that metformin affects the proliferation of stem cells and neurogenesis that could be associated with increasing neurotrophic factors; therefore it can be effective in neurodegenerative diseases such as Alzheimer’s and Parkinson’s [4-6] .In the field of stem cell medicine, major scientific interest is focused on the cytophysiological characteristics and clinical use of Mesenchymal Stem Cells(MSCs). MSCs have several properties to use in tissue engineering, including: proliferation ability and differentiation capacity and neuroprotective properties mediated by secretion of various neurotrophic factors, and immunomodulatory, anti-apoptotic, and anti-inflammatory effects. MSCs possess the abilities of cell engraftment, and in addition, their easy accessibility and quick in vitro expansion make MSC an ideal resource for regenerative transplantation therapy [7,8].

Reactive oxygen species are the products of aerobic metabolism that regulate different cellular stages including apoptosis‚ differentiation and, aging [9]. Oxidative stress means an imbalance between the production of oxidant and their elimination system‚ i.e., antioxidant enzymes [10]. The body’s biological system has an advanced mechanism to control Reactive Oxygen Species (ROS) levels‚ that neutralizes the excessive ROS and prevents cell damage. In common, increased reactive oxygen species inhibit stem cell proliferation, increase cell senescence, and inhibit immunomodulation. Moreover, cell senescence, and oxidative stress reduce their in vitro and in vivo expansion, which is critical for their stem cell transplantation [11].

Neurotrophic Factors (NFs) are large polypeptides that contribute to development and survival of the central and peripheral nervous systems [12]. At first‚ GDNF was used to increase the survival of dopaminergic neurons in the midbrain also, it can use to treat Parkinson’s patients whose dopamine neurons are damaged [12]. In Alzheimer’s disease‚ the BDNF mRNA reduces in the hippocampus and parietal cortex [13]. It has been shown that the drug induced expression of Brain-Derived Neurotrophic Factor (BDNF) and Glial cell-line Derived Neurotrophic Factor (GDNF) in mouse substantia nigra [14]. Metformin is able to increase proliferation in neural stem cells and periodontal ligament stem cells. However, the antioxidant effects of metformin against oxidative stress and its underlying mechanisms in stem cells have not been studied well. The aim of this work was to evaluate the effect of metformin on cytophysiology properties of Bone marrow Mesenchymal Stem Cells (BMSCs). Our research included cell proliferation activity, amount of oxidative stress and, neurotrophic genes expression.

The study was conducted with the approval of the Bioethics Committee, as stated by the Local Bioethics Committee at the molecular and cellular department, School of Biology, Damghan University, Iran (1397/4558). Adult male Wistar rats weighing between 200 and 250 g were purchased from Razi Institute, Karaj, Iran. They were kept under standard laboratory conditions with a 12 h light/12 h dark cycle and ad libitum food and water throughout the experiments.

Preparation and culture of MSCs

Rat MSCs were obtained from the bone marrow of femurs and tibias using the method of Azizi et al. [15]. The cells were cultured in Alfa dulbecco’s Minimal Essential Medium (α-MEM), (Gibco) supplemented with 10% Fetal Bovine Serum (FBS) (Gibco), 1% penicillin and streptomycin (Gibco). The cells were seeded in 25 cm2 tissue culture flasks (Falcon) and incubated at 37ºC and 5% CO2. After 48 hr non-adherent cells were removed by replacing the medium. After the cultures reached the optimum confluence, cells were lifted by incubation with 0.25% trypsin and 0.02% EDTA (Merck) at 37ºC for 3-4 min and the subculture of the cells were re-plated at a density of 4 × 105 cells/cm2. Cell density (cell count) and cell viability were determined using a neubauer hemocytometer as explained by Davis JM and MTT assay [16-18].

Briefly 2 × 104 cells at passage 2 per well were seeded in 96-well plates, and incubated in 200 ml a-MEM supplemented with 10% FBS. After 48 hours of incubation‚ the cells were washed with PBS and then 200 μl α-MEM and different concentration of metformin (Shahrdaru, Iran) including 1‚ 5‚ 10‚ 15 and 50 μM were added to induce BMSCs. After 24 hours of treatment‚ the medium was removed and replaced with 10 μl MTT (5 mg/ml‚ Sigma) and kept at 37ºC for 4 hours. In order to form the formazan crystals‚ absorbance was read at 540 nm by an Eliza reader (Bio Tek‚ USA). The test was repeated five times for each group [19].

To identify and Cell proliferation rate BMSCs, they were placed on gelatinized slides at 5 × 104 cells/ cm2. For immunostaining, they were fixed in 4% PFA (paraformaldehyde) for 20 min at 4ºC before being permeabilized in 0.3% Triton X-100 for 15 min, and blocked in 10% normal goat serum for 15 min. Subsequently, the samples were incubated with primary antibodies overnight at 4ºC. Sources and dilution of primary antibodies used were as follows: mouse anti-BrdU primary antibody (Sigma-B 2531, 1:500). Afterwards, the cells were incubated with secondary antibody at 37ºC for 30 min. Secondary antibodies were Rhodamine-conjugated antimouse (1:100; Millipore, AP124R) for BrdU marker. Cells were examined using a fluorescent microscope (E600- Eclipse Nikon) equipped with a digital camera (DXM 1200 Camera Nikon Digital). The number of nuclei in positive cells (BrdU) was counted in 20 fields. A negative control was investigated in each experiment by replacing the primary. All immunocytochemical experiments were repeated over 3 times for each group.

Table 1 presents the primer sequences and product sizes. GAPDH was used as the housekeeping gene (internal control). The PCR products were dissolved in 1.5% agarose gel and visualized and photographed on a UV transilluminator (UVIdoc, EU). We used the UVIdoc software (version 12.6) to perform the quantitative evaluation of the band volumes, which were expressed as gene expressions. Each experiment was performed in triplicate. All the stages were controlled in the cDNA preparation stage by deleting the RNA sample and reverse transcriptase and in the RT-PCR stage by deleting Taq polymerase and the cDNA products.

All data are shown as mean ± standard error. Data were analyzed using SPSS software version 16. Analysis of the differences between data was done using one-way ANOVA test followed by Tukey test and P<0.05 was considered as a significant level.

The effect of metformin on MSCs proliferation and cell viability

To test the antioxidant effects of metformin, BMSCs were treated with metformin for 24 hr. One-way ANOVA showed that there was a significant difference between groups in the rate of MSCs cell viability. As shown in Figures 1-3, treatment MSCs with 10 μM showed a significant increase compared to the control. Treatment with 50 μM of metformin caused a significant decrease in the proliferation rate in comparison with the control group (P<0.05). 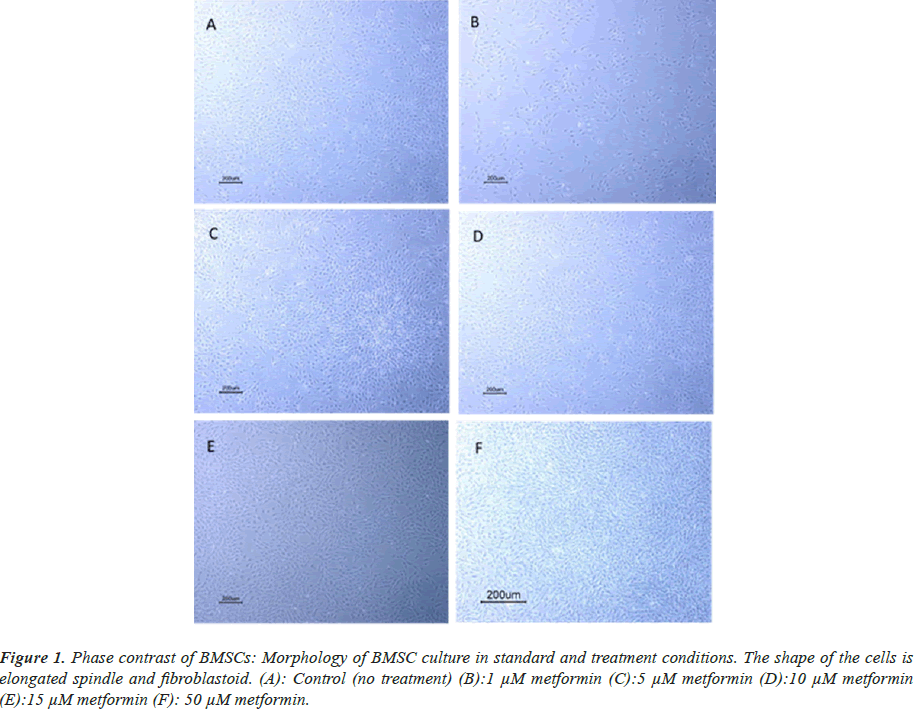 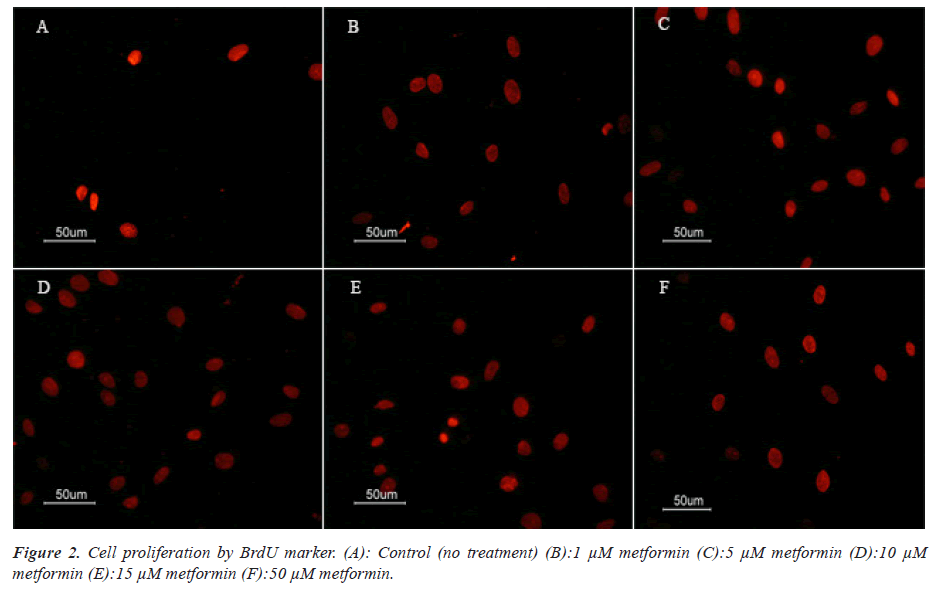 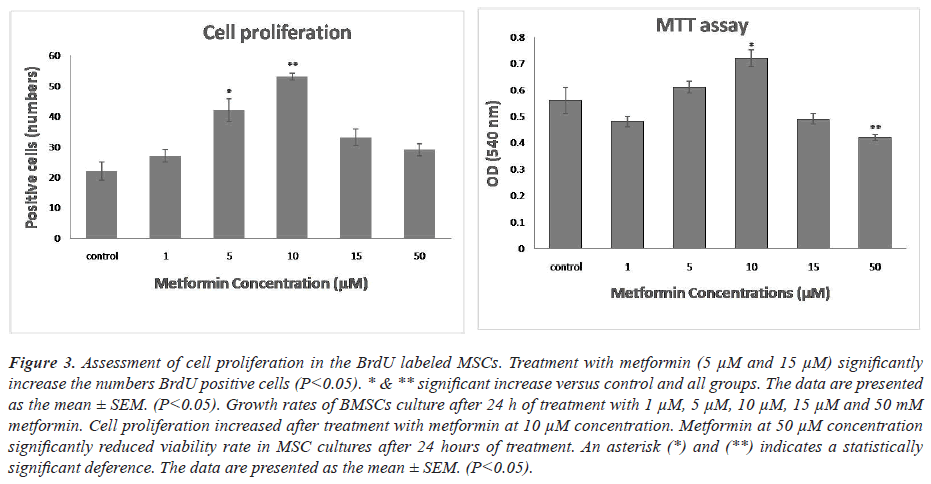 Cells were stained for BrdU marker at 24 hours after culture. One-way ANOVA showed that there was a significant difference between groups in the rate of MSCs proliferation. Comparison of different groups of cell culture showed that BrdU positive cells were increased at induced cells with metformin in comparison with control group. MSCs at 5 and 10 μM metformin showed a significant increase of proliferation rate compared with other groups (P<0.05).

Our results revealed that metformin caused a significant increase in the NFs (BDNF, GDNF and NT3) expression in the treated groups compared to the control group.

In fact, numerous in vivo and in vitro studies showed that metformin has multidirectional action. While metformin, as the most commonly used antidiabetic drug, it’s recognized not only as a hypoglycemic agent, but also as a drug that protects against the aging process and oxidative stress. Much attention has been paid to improving culture conditions, increasing the capacity and capability of MSCs. Possible clinical application must be based on the abundance, expansion potential and other characters of the stem cells. MSCs in vitro usually have a limited life-span and undergo senescence, indicated by the loss of proliferation ratio and altered morphology. In our previous studies the immunocytochemical testing were performed using specific markers CD71 and CD90, to identify mesenchymal cells. Also adipogenic and Osteogenic differentiation were confirmed by the formation of small lipid droplets and the production of calcium phosphate and mineralized extracellular matrix after 3 weeks. Since self- renewal is one of the common properties of MSCs, in this study BMSCs were evaluated and compared by MTT assay and BrdU marker. The BrdU marker is widely used for cell division in vitro and cell transplantation. MTT assays indicated that metformin viabilities of BMSCs in dose- dependent manners. The number of positive BrdU cells increased in 24 hours after culture with metformin. The use of BrdU marker to investigate the effect of Metformin on MSCs has been reported in a previous study. The effect of metformin concentration on stem cell proliferation has been reported differently. For example, metformin has an inhibitory effect on dental pulp cells and human chorionic villi stem cells‚ but it causes proliferation in neural and mesenchymal stem cells. Our results indicated that the rate of cell proliferation increased in a dose-dependent manner. The results of our study are in line with another study by Gao et al. showed that cells under osteogenic conditions and treated with 100 μM metformin increased proliferative and osteogenesis activity. Chang et al. results were almost in agreement with ours. A research confirmed that in 0.05 mM of metformin, the proliferation rate of Chorionic Villous Mesenchymal Stem Cells (CV-MSCs) remained unchanged, but in higher concentrations (0.1- 1 mM), cell proliferation was inhibited. Based on the discrepancy of results among studies, and according to molecular mechanisms of metformin on inhibition proliferation‚ it can speculate that the discrepancies might come from cell type and dose differences. Metformin causes cell proliferation in low concentrations‚ but it has anti-tumor effects at higher concentrations and can inhibit the proliferation of cancer cells. As shown in Figure 3, the rate of cell proliferation was significantly increased in a dose-dependent manner in the experimental groups (5 and 10 μM) at 24 h compared with the control in MSCs.

The results of this study indicate that the self-renewal and proliferation rate by metformin showed a significant increase compared to control groups. Also, metformin- treated cell groups showed a higher antioxidant capacity than the control group. Metformin seems an appropriate inducer factor to induce neurotrophic genes such as BDNF, GDNF, and NT3 genes and therefore can be used to treat neurodegenerative diseases like Alzheimer’s. Additionally, we observed that metformin supplementation signifcantly increased neurotrophic factors in MSCs and simultaneously increased SOD and GPX activity. Another potentially important finding of this study was that metformin can ameliorate culture condition in MSCs.

We declare there is no conflict of interest between authors. 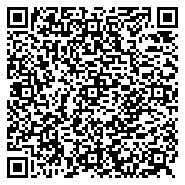