In severe illness of any cause, downregulation of the thyroid hormone system may occur. How this affects patients with acute myocardial infarction (AMI) is largely unknown. To investigate changes in serum levels of the thyroid hormones during AMI in the CAD-prone South Indian population. In this study, thyroid parameters were estimated in a series of 30 consecutive infarction patients treated by thrombolysis. Blood samples were taken at time of admission before therapy (4h), after 12h, 24h, 36h, 48h and 7th day following admission and we investigated the possible relationship of these alterations with the severity of AMI. Fifteen patients had left ventricular ejection fraction (LVEF) < 50% (group I) and 15 patients had LVEF > 50% (group II). A transient decrease in total tri-iodothyronine (T3) occurred at 24 hours after onset of symptoms, in both groups. Total thyroxine and TSH levels did not change significantly. Negative correlation was found between total T3 and CK-MB levels (p < 0.001). The thyroid hormone system is rapidly down regulated in AMI. This may be beneficial during acute ischaemia. The degree of T3 decrease is proportional to the severity of cardiac damage and may have a possible prognostic value.

In severe illness of any cause, depression of the thyroid hormone system may occur in otherwise euthyroid patients. In this condition, called the euthyroid sick syndrome, the normal feed-back control of the thyroid homeostasis is changed [1-3]. Levels of thyrotropin (TSH) do not increase, although levels of the ac-tive hormone triiodothyronine (T3) become low. The conversion of the pro-hormone (Thyroxine, T4) to the active form is reduced due to decreased 5‟-deiodinase activity peripherally and produc-tion of reverse T3 (rT3), the inactive metabolite, is increased.

This syndrome has been found in severe chronic heart failure [4] and in AMI [5] also. The more profound the changes in hormone pattern, the poorer the prognosis [6,7].

Experimental animal studies have indicated that treatment with thyroid hormone may be beneficial in heart failure after AMI [8-11]. The aims of the present investigation were to study changes in the thyroid hormone system in patients with AMI and to evaluate whether such changes have a prognostic signifi-cance in determining severity of AMI.

Thirty patients with a first episode of AMI, who were admitted to the medical intensive care unit of JIPMER hospital 1-6 hours (mean 4 h) after onset of pain were included in the study. The diagnosis of AMI was based on the history of prolonged chest pain (> 30 min) and it was confirmed by typical ECG changes and elevation in CK- MB levels. The mean age of the patients was 60 + 8 years, range 50-72 years. Exclusion criteria from the study were previous MI, cardiac disease, endocrine/thyroid ab-normalities, chronic illness and use of medication before admission. Blood samples were taken at time of admission, before any treatment (4h) & at 12h, 24h, 36h, 48h and 7 days after onset of symptoms. After separation, samples of sera were kept frozen at – 20°C until day of the assay.

Informed consent was taken from all patients, who participated in the study and the study was approved by the hospital‟s ethics committee. Serum total T4 and T3 were assayed by radioimmu-noassay (RIA) and TSH levels by immunoradiometric assay (IRMA) using kits obtained from the Board of Radiation and Technology, Mumbai. The methods of the quantitative determi-nations used radioimmunoassay solid-state coated-tubes for total T3 & T4. TSH estimation was done using the immunoradi-ometric sandwich method. All samples were analysed for car-diac enzymes, total CK and CK-MB, estimated by enzymatic methods. Patients underwent 2-dimensional echocardiography during their stay on the ICU, to determine their LVEF (left ven-tricular ejection fraction).

All results were expressed as mean + SD and a two tailed p value < 0.05 was accepted as significant. Statistical analysis was done by Spearman correlation and student‟s “t” test.

The 30 patients with a first episode of AMI included in the study were divided into two groups based on their LVEF. An LVEF of 50% was used as cut off to identify patients with better or poor prognosis.

The characteristics of the two patient groups are shown in the Table 1. 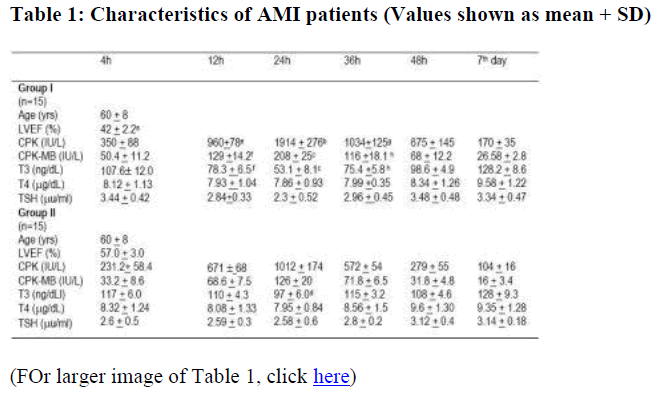 In both groups, a marked rise in serum CK and CK-MB, as ex-pected, was observed 24h after onset of the chest pain, followed by a rapid decrease thereafter. The concentrations of CK

Evaluation of thyroid hormone after myocardial infarction and CK-MB were significantly higher in group I, than in group II (p < 0.05).

At the time of the peak of serum enzymes (24 h after onset of pain), serum T3 fell in both groups (table 1), however the decrease was more significant in group I (p < 0.001) than in group II (p < 0.05). Serum T3 increased gradually within subsequent hours, without significant differences between the values within the two groups at any point of time. The T3 levels returned to normal levels on the 7th day.

Serum concentrations of total T4 and TSH remained within the normal range and did not change significantly in both groups.

The thyroid hormone system was transiently downregulated in other wise euthyroid individuals during the acute phase of myo-cardial infarction [12]. In the present study, the lowest serum T3 levels were found 24 hours after the onset of chest pain at the time of the highest serum CK/CK-MB levels, whereas serum concentrations of total T4 and TSH remained within the normal range and did not change significantly in both groups.. The ex-tent of decrease was more significant in patients in group I (with LVEF < 50%), who have a worse prognosis than those in group II. There is a significant inverse correlation between total T3 levels and CK-MB levels (rs= -0.883 & p < 0.001), indicating that there is an inverse quantitative relationship between the severity of AMI and the changes in conversion of T4 to T3.

The probable mechanisms for the transient decrease in serum T3 levels is multifactorial and can be attributed to:

b) a decrease in binding to serum proteins

c) an expanded volume of distribution

Serum interleukin-6 (IL-6), which has been shown to be in-creased in the low T3 syndrome, appears to inhibit the hepatic monodeiodinase activity [13]. Cardiac myocytes in border zone of reperfused viable myocardium, monocytes and macrophages produce IL-6, which may in part mediate the changes in serum T3 level after an acute MI [14].

High catecholamine levels are known to cause low T3 syndrome[16]. The changes in blood levels of thyroid hormone in the euthyroid sick syndrome might be due to the high levels of blood catecholamines generally found in patients with AMI.

Pavlou et al [17] and Friberg et al [18] have also reported a rapid downregulation in T3 levels in patients with acute myocardial infarction. It has been postulated that downregulation of the thyroid hormone system may be an advantage if it is present when AMI strikes because the O2 demand of the myocardium may be reduced, when metabolic rate is diminished [19].

Whether the euthyroid sick syndrome is an advantage after AMI when damage has occurred and heart failure might be emerging may be questioned. Circumstances make it adequate to hy-pothesize that it may be deleterious. Thyroid hormones affect ventricular function through stimulation of sarcoplasmic calcium adenosine triphosphatase (ATPase) activity and expression [20]. This ATPase is responsible for removal of calcium from cytosol in diastole, allowing uncoupling of actin-myosin cross-bridging. It is therefore important for diastolic function of the heart. It also regulates the quantity of calcium in sarcoplasmic reticulum available for systolic contraction and is thus hereby also important for systolic function of the heart [21]. When the thyroid hormone system is downregulated in short term in AMI, intracellular calcium handling is affected in a way that may contribute to myocardial stunning and reperfusion injury due to calcium overload [22]. Furthermore, downregulation of the thyroid hormone system leads to increase in systemic vascular resistance and increased cardiac afterload. If the heart is unable to cope with this, cardiac output will be reduced.

If these seemingly disadvantageous effects of decreased production of biologically active T3 were important, patients with more marked hormone derangement would have a worse prog-nosis regarding heart function and survival. We have reported significant positive correlation between degree of thyroid hor-mone level depression and severity of AMI.

Animal studies23 have demonstrated that thyroid hormone treatment at doses sufficient to normalize serum T3 significantly improved cardiac function and T3 treatment in the setting of cardiac disease and altered thyroid hormone metabolism may have potential beneficial effects [24]. The effects of T3 treatment in AMI patients remains to be evaluated.

With prospective studies on larger patient materials, the cause and consequence of euthyroid sick syndrome in AMI can be further clarified. This biochemical marker, in addition to others, can be helpful in predicting the outcome of our patients with coronary artery disease.

In conclusion, the thyroid hormone system is rapidly down regulated in acute myocardial infarction. This may be beneficial dur-ing acute ischaemia. The degree of T3 decrease is proportional to the severity of cardiac damage and may have a possible prognostic value.Thus, T3 blood levels may contribute to the elaboration of an AMI severity index.