Thyroid dysfunction is associated with chronic obstructive pulmonary disease depending upon severity of disease. The aim of this study was to evaluate thyroid function impairment among stable and acute exacerbation COPD patients with age matched healthy controls and correlation of thyroid function tests with pulmonary function test and arterial blood gas analysis. 60 {30 stable (group1) and 30 exacerbation (group2)} COPD patients and 30 age matched healthy controls (group3) were studied. There was a significant difference with respect to BMI, mean serum FT3 in between group 1&2; group 2&3 and group 1&3. Mean serum TSH was within normal limits but had lower values than controls. FT4 was within normal limits. It had no significant difference between all groups. Mean serum FT3 was negatively correlated with bicarbonate levels whereas FT4 was negatively correlated to Hb levels .No correlation was found in between Pulmonary Function Test and ABG analysis with thyroid function impairment. In conclusion among all groups of COPD patients, impaired thyroid function is associated with respiratory workload, as thyroid hormones regulate the metabolic rate and in exacerbation phase due to critical illness thyroid dysfunction reflects non-thyroidal illness syndrome.

Chronic obstructive pulmonary disease (COPD) is a major cause of chronic morbidity and mortality throughout the world. The Global Burden of Disease Study has projected that COPD which ranked sixth as the cause of death in 1990, will become the third leading cause of death worldwide by 2020 [1]. COPD is no longer considered to affect only the lungs and airways but also the rest of the body. The systemic manifestations of COPD include a number of endocrine disorders, such as those involving the pituitary, the thyroid etc. The thyroid hormone regulates the metabolism of proteins, lipids and carbohydrates, and controls the activity of membranebound enzymes [2,3]. The thyroid hormone enhances mitochondrial oxidation, and thus, augments metabolic rate [4]. This effect on metabolic rate is probably responsible for the association between the thyroid hormone and respiratory drive [5]. Limited data on the prevalence of thyroid diseases among patients with COPD are available [6,7] yet, several characteristics of patients with COPD could potentially increase their likelihood of developing hypothyroidism and hyperthyroidism. Also the severity of airway obstruction in these patients affects the rate of survival [8] and is associated with impairment of thyroid gland function [9]. So there might be a possibility of differences in hormone levels during stable and exacerbation phases in comparison to healthy controls.

In this study, we evaluated abnormalities and the correlation of thyroid hormone concentration, arterial blood gas analysis (ABG) and pulmonary function test (PFT) among stable and exacerbation COPD patients with comparison to age-matched healthy controls.

The study group comprised of 60 COPD patients and 30 control subjects. In patient group they were subdivided again under stable (30) and acute exacerbation phases (30). The patients with COPD were diagnosed according to the Global Initiative for Chronic Obstructive Lung Disease Criteria [1] by the respiratory Physician.30 patients had been clinically stable for at least 3 months and 30 had clinical signs of COPD exacerbation. Stable COPD patients had been receiving inhaled bronchodilator therapy in the form of long-acting β2-agonists and/or anticholinergic agents. Severe/very severe COPD patients were on inhaled corticosteroids. The patients were not receiving iodine-containing drugs. Patients diagnosed with endocrinological disorders, on systemic steroid therapy or displaying an infected profile (fever, leucocytosis, consolidation area on performed chest X ray) and using long term oxygen therapy were excluded from the study. From total 60 patients 32 were ex smokers, 22 were current smokers and 6 were nonsmokers.

The control group comprises 30 (20 male and 10 females) age matched healthy individuals; all were non smokers, not on any medication, whose written consents were obtained from them. The study was approved by the institutional ethics committee and written consent was also obtained in each case.

A clinical history was obtained and a physical examination performed on the patients who attended the institute of respiratory diseases, SMS medical college and hospital, Jaipur. After an overnight fast, height and nude weight were measured in all subjects and body mass index (BMI) was calculated. Arterial blood gas measurements were taken on the same day with the PFT. PFT was performed using SpiroAnalyser HELIOS 400 according to acceptable manoeuvre. Arterial blood samples were drawn while the subjects were breathing room air and analyzed with a blood gas analyzer immediately (STAT PRO PHOX Plus L, Nova Biomedical). Serum thyroid hormones were measured in 5 ml venous blood during morning fasting. Serum levels of free triiodothyronine (FT3), free thyroxine (FT4) and thyroid-stimulating hormone (TSH) were determined by using the commercial IMMULITE kits, which are solid-phase, two-site chemiluminescent immunometric assays (IMMULITE, SIEMENS Healthcare Diagnostics). 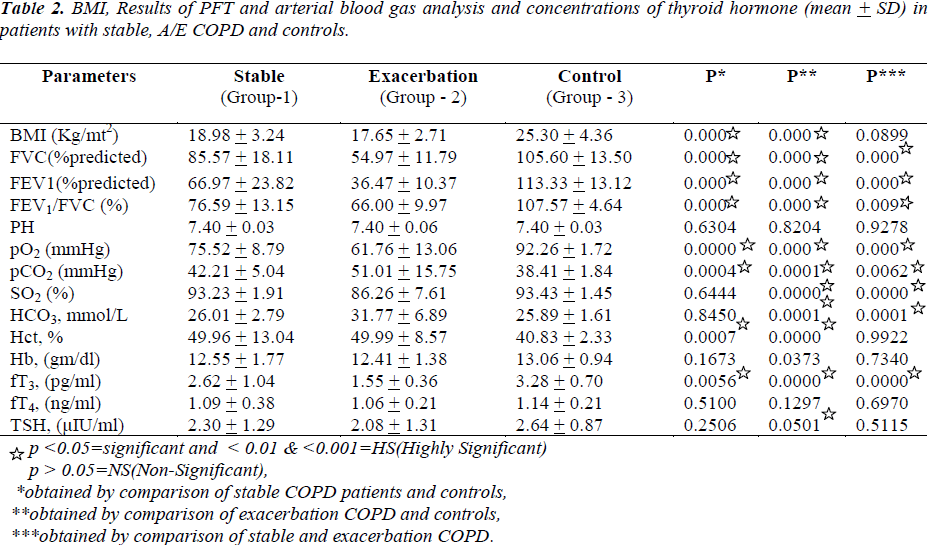 Impaired thyroid function can present as subclinical hypothyroidism, overt hypothyroidism and nonthyroidal illness syndrome. Of these, the nonthyroidal illness syndrome is the most common in COPD [6], Patients with nonthyroidal illness syndrome have decreased levels of the biologically active hormone T3 and normal or decreased levels of the prohormone T4 [10]. Serum levels of the TSH are usually normal, though they can be low in the most severely ill patients [11]. The presence of thyroid dysfunction may vary according to the phases of COPD. Thus we investigated the thyroid functions among stable and A/E phases. We found that among A/E COPD patients as compare to stable, this syndrome was more marked as mean FT3 values suggests and mean TSH values were also comparable in between group 2 and 3. Pechatnikov [11] found low T3 and T4 with high TSH concentrations in patients with COPD, reflects the non thyroidal illness syndrome. Turkay Akbas et al [12] were also found low FT3 and TSH levels in critically ill COPD patients but it varies according to gender. Female patients had lower FT3 than males and increased when they recovered from critical illness. We also found that in exacerbation phase the mean FT3 and TSH values were lower as compared to stable and healthy controls but did not vary according to gender. These findings suggest that in A/E phases of COPD significant changes develop in neuroendocrine axis and hormone suppression vanishes with disease improvement. Dimopoulou et al [7] found that all patients had normal values for resting thyroid hormones however, in severe COPD; a certain degree of thyroid dysfunction was evident. Hugli et al [13] reported normal levels of thyroid hormones in 11 clinically stabile COPD patients with normal weight. Gow et al [9] investigated thyroid function in 20 patients with exacerbation, having severe COPD (highest FEV1 40% of predicted). They did not find any correlation between arterial blood gas measurement and thyroid hormone concentrations in patients with COPD. Okutan et al [14] compared 32 COPD patients with 15 controls in which they found PFT and pO2 significantly lower and T3 levels to be higher .In this study, the findings were dissimilar with respect to FT3 but significantly low pO2 and PFT in the stable as well as among A/E COPD patients. They found a positive association in between pCO2 and FT3 while all other values were negatively correlated with FT3. In our study, in between PFT and TFT there was no correlation in between group1 and 2 but with severe to very severe airway obstruction FT3 was negatively correlated with HCO3 and FT4 with Hb levels. Kursat Uzun et al [15] studied TFT only in patients with A/E COPD, found significant difference according to the percentage of cases with TSH less than minimum values and FT3 higher than maximum values between COPD and control group. They demonstrated that both clinical and subclinical hyperthyroidism were higher in patients with COPD exacerbations than cases without COPD. They suggest that severe airway obstruction and excessive respiratory muscle load affect thyroid hormone levels in patients with COPD.Funda COSKUN et al [16] reported no significant difference in TSH and FT3 between group 1(COPD) and 2(Healthy controls) but significant difference on the basis of severity of disease. Systemic response to chronic disease in COPD patients might cause a hormonal imbalance which in turn affects the severity of the disease [16].

So far there is no evidence that thyroid function is consistently altered in COPD except in a subgroup of patients having severe hypoxemia. We tried to find out the comparative assessment in between the stable and A/E COPD groups with age matched healthy controls. As thyroid hormone constitutes their role in the metabolic process. Increased respiratory drive in COPD patients may alter thyroid function. Our study suggests that it impacts its effect in the form of the Non thyroidal illness syndrome, yet it is not known that whether illness syndrome is a favorable compensatory mechanism to offset catabolism and protein breakdown or it is an unfavorable adaptation with resultant biochemical hypothyroidism [6]. Furthermore extensive studies are required to identify underlying mechanism and consequences of thyroid dysfunction and its role in supplementation. The limitation of this study is, it’s an analytical observational study with lesser sample size and hence a follow up study during the recovery phase from exacerbation may be required to substantiate the findings.

In conclusion, mean level of FT3 was significantly lower among A/E COPD. Hypoxemia and hypercapnia did not correlate with Thyroid function test .We suggest that among A/E group due to having critical illness, the existence of Non-thyroidal illness syndrome prevalent as compared to stable COPD and healthy controls.