Materials and Methods: Pathologic specimens of 100 breast cancer patients were stained with an Androgen Receptors (AR) immunohistochemical stain, and the nuclear staining was positive. The intensity and distribution scores of the stainings were summed, and then the total score was calculated. A total score from 0-1 was accepted as negative, while an overall score of 2 and above was positive. The obtained data were evaluated with Chi-square and descriptive statistical methods. A survival analysis was carried out using a Kaplan-Meier test.

Breast cancer is the most frequently diagnosed cancer and the leading cause of cancer deaths in females in economically developing countries worldwide [1]. Therefore, new strategies are being developed for breast cancer prevention and treatment [1]. A patient’s hormone receptor status is known to affect a breast cancer diagnosis as well as its histological typing and treatment response evaluation [2].

The identification and definition of the estrogen and progesterone receptor status in breast cancer is a standard histological evaluation procedure [3,4]. The prognostic significance of Estrogen Receptor (ER) and Progesterone Receptor (PR) expression in breast cancer and their roles in therapy are well recognized, but the significance of AR expression is less well characterized [5].

In this study, we aimed to research the relationship between androgen receptor expression and the prognostic factors of breast cancer.

We retrospectively investigated 100 patients who had been diagnosed with breast cancer, were followed up at the Department of Radiation Oncology at Cumhuriyet University College of Medicine, and whose specimens had been accessed at the Department of Pathology at Cumhuriyet University College of Medicine between 2008 and 2013. The data of patients were retrospectively analysed and evaluated.

Immunohistochemical staining was used to evaluate the cells’ androgen receptor expression status. Nuclear staining was accepted as a positive result. The intensity score and distribution score of these stainings were summed, and the total score was calculated. A total score from 0-1 was negative, while a total score of 2 and above was positive. The estrogen receptor, progesterone receptor, Human Epidermal Growth Factor 2 (HER2), and Ki-67 status of the cells were reexamined.

We performed all analyses using the Statistical Package for the Social Sciences (SPSS) software, version 15.0 (SPSS Inc., Chicago, IL, USA). The Chi-square test and descriptive statistical methods were used to evaluate the work data. Kaplan-Meier test was used for the survival analysis. We considered the differences to be statistically significant at a p-value< 0.05 (two-sided test), and the results were evaluated at the 95% Confidence Interval (CI).

One hundred breast cancer patients’ data were analysed, and the median age of these patients was 53 years (range: 17-92 years). Forty-three patients (43%) had been diagnosed in the premenopausal period, and 57 (57%) were diagnosed during the postmenopausal period.

Table 2: A comparison of the estrogen receptor subgroups across several parameters. 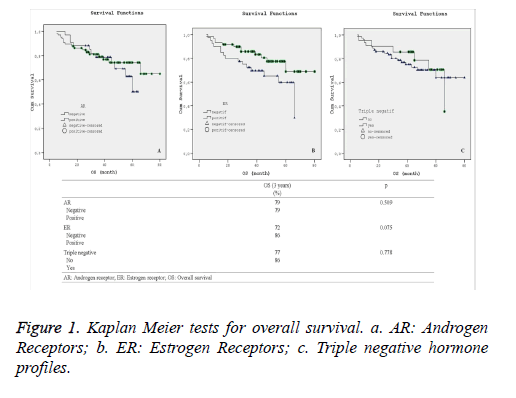 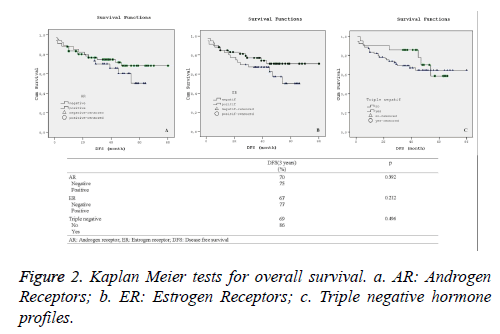 Although there was no substantial difference in the overall and disease free survival 3-year rate in terms of other hormone profiles, the 3-year Kaplan-Meier survival curves for overall survival as shown in Figure 2b demonstrated visual improvement (p=0.075) survival across in estrogen receptor positive patients.

Some cancer deaths may potentially be avoided, particularly when breast cancer is controlled [10]. The early findings from a community-based intervention that was conducted to raise the general awareness of the signs and symptoms of three common cancers (breast, colorectal, and lung) and promote an earlier presentation and diagnosis are presented. The prevention, early diagnosis, and treatment of breast cancer are particularly effective [10,11].