2Faculty of Pharmacy and alternative medicine, The Islamia University of Bahawalpur, Bahawalpur 63100, Pakistan

Glutathione mainly exist in glutathione reduced (GSH) and glutathione oxidized (GSSG) in the body, among which; the GSH is more in concentration than GSSG [1]. In mammalian cells, glutathione is the dominant nonprotein thiol (Lu, 1999a). The glutathione level ranges from 0.1mM to 10mM different human tissues [2]. Glutathione is synthesized in most of the body cells and also transported from the liver to various other organs of the body [3, 4].

The most important function of GSH is the detoxification of xenobiotics and drug by GSH conjugation reaction [5]. GSH binds to heavy metals, like zinc, mercury, cadmium and copper and transport them to the liver, where they are further detoxified and excreted [6]. The oxidation state of Aluminium is 3+ [7] and GSH has electron donating property [8]. Thus this study was performed to reveal the possible intrection of Aluminium metalloelement with the GSH in the plasma and cytosolic fraction of human blood. In the aquous phase of blood GSH is present and Aluminium has strong affinity for GSH. This affinity mainly exist between Aluminium and sulfhydryl groups of GSH [9]. This affinity can decrease the reduced form of GSH in the blood,but with the depletion of GSH, glutathione synthesizing system start making more GSH from cysteine via the γ-glutamyl cycle but if GSH is usually not effectively supplied, however, if GSH depletion continues because of chronic metal exposure [9-11] then the pharmacological benefits of the Aluminium metal being used for the help of body defenses can be harmful in nature to the body defense system . The following study makes a design to see the effects of Aluminium Sulphate, in respect of concentration and time, on glutathione level in cytosolic fraction.

Preparation and isolation of blood components

Three male volunteers with average age of 25.5 years who were found of good health and free from any disease were recruited. All three volunteers were student of Gomal University (Pakistan). A written consent was taken from each volunteer indicated they were non-smokers and not using any drug during the study period. 12 ml fresh venous blood was collected from each volunteer and treated with 0.5mM Na-EDTA to prevent clotting then 1 ml of blood was taken and mixed with of 1ml of each concentration of Aluminium (100,200,300,400,500.600, 700, 800,900 and 1000 μM) solution and incubated for 10 minutes. Then the solution containing equal volume of blood and Aluminium in 1:1 ratio was then centrifuged at 1000 rpm for five minutes. The supernatant fluid was removed with pasteur pipette, transferred to sample tubes kept on ice till use and the remaining portion after taking plasma was then processed for cytosolic fraction. Control was also centrifuged for isolation of plasma and cytosolic fraction containing equal volume of blood and 0.9% NaCl solution and incubated as before.

The remaining cells were washed twice with isotonic saline solution and blood cells were lysed at 40C with an equal volume of distilled water for 1hour then after 1hr cold mixture of chloroform-ethanol (3:5v/v) 0.8ml was added to 2ml of lyed cells to precipitate the hemoglobin, followed by addition of 0.3 ml of distilled water. Then the mixture was centrifuged and pale yellow clear supernatant was removed by pasteur pipette and transferred to sample tubes and stored on ice till use. Control containing equal volume of blood and NaCl solution was centrifuged as before.

A standard Ellman’s method [12] was used for the estimation of all glutathione as given below; According to this method 2.3 ml buffer was added to 0.2ml of the sample (plasma or cytosolic fraction) followed by addition of 0.5ml of DTNB. The mixture was then analyzed by spectrophotometer. The reference cell contained buffer. Blank consist of 2.5ml of buffer and 0.5ml of DTNB and measured against a reference cell containing 3ml of buffer. All the measurements were carried out at 412 nm after five minutes. Uv/visible spectrophotometer of Model 1601(Shimadzu) was used for absorbance readings.

Effect of Aluminium on glutathione level of extracellular plasma fraction of blood;

1ml of different concentrations of (100, 200, 300, 400, 500, 600, 700, 800, 900 and 1000μM) Aluminium was added to blood in 10 separate tubes. Plasma in each tube of blood was isolated after 10 minutes of incubation and then transferred to separate tubes. Ellman’s method [12] was used for the measurement of reduced GSH contents. The plasma GSH level of blood decreased with the increasing concentration of Aluminium as shown in the Results are express as a Mean ± SE of 3 experiments of plasma glutathione. There was found a significant change in the content of plasma GSH from control was observed at p<0.05 time intervals (0, 30.60,90,120,150,180 and 200 minutes for plasma GSH content was also measured when two different concentration of Aluminium (100 and 1000μM) were added. The glutathione level of extracellular plasma decreased at time intervals shown in the Figures 2-7. These results indicate that decrease in plasma GSH level Aluminium concentration and time dependent. 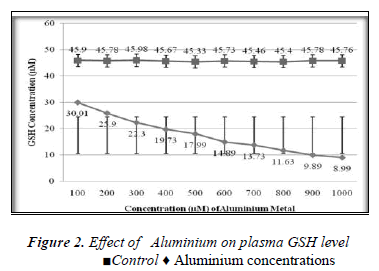 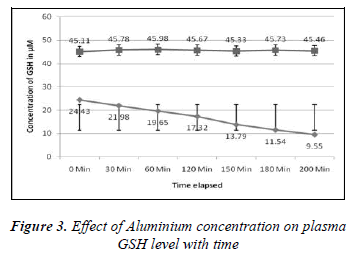 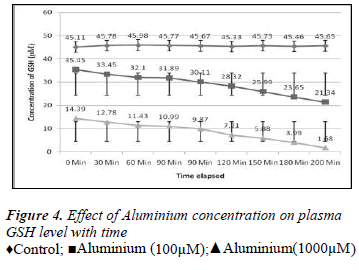 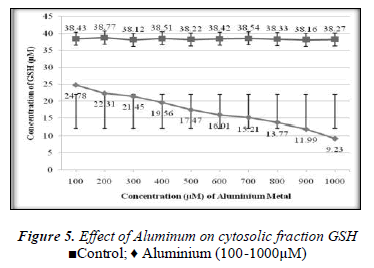 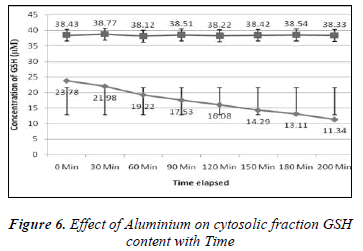 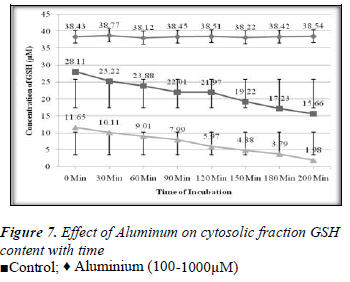 In the present study the 100-1000μM concentrations of Aluminium was used. The main aim of this study was to determine the effect of Aluminium metal on GSH level present in both plasma (extracellular component) and cytosolic fraction of the human venous blood sample. The main focus was to explore the protective role of GSH in the metals induced toxicity. GSH has variety of role as antitoxin, free radical scavenger and participating in the conjugation. Aluminium caused depletion of GSH concentration in plasma and cytosolic fraction of human venous blood. Depletion of GSH concentration in plasma and cytosolic fraction could be due to the interaction of reduced Glutathione and Aluminium either from oxidized Glutathione (GSSG) or Al-SG complex. This study confirms the finding of other authors that concentration of reduced GSH present in whole blood of human volunteer is decreased by metal due to interaction of reduced GSH and metal to form the oxidized Glutathione (GSSG) or metals-SG complex [13]. The interaction between metal and glutathione in vitro as model of in vivo reaction will develop further scientific data and strengthen our knowledge about the toxicological profile of Aluminium and the protective role of Glutathione to prevent our body from harmful effects [14]. Aluminium induced the depletion of glutathione in blood components according to our findings. There was found a positive correlation between the exposer of GSH to the above given concentrations of Aluminium and the depletion of glutathione with time (0- 200min).

The exact mechanism of the reaction between Aluminium and depletion of reduced glutathione still need to be fully investigated, but the formation of Al-GS complex may be proposed. Considering the reducing power of GSH [8] and the 3+ oxidation state of Aluminium [7], we can presume a possible conjugation reaction between reduced GSH and Aluminium metal. Although the exact mechanism of this conjugation reaction cannot be distinguished from this piece of research work, however this study can be useful further to explore the role of GSH in the metabolism and excretion of the important diagnostic agent Aluminium. This research study also gives an idea about the protective role of GSH against Aluminium toxicity.