Our aim was to investigate effects of chronic hypoxia on endocrine function in pediatric patients with cyanotic congenital heart disease (CHD). Thirty patients with cyanotic CHD (16 boys, 14 girls), and 35 control subjects (22 boys, 13 girls) were enrolled. Age means of patients and controls were 4.37±4.51 and 4.28±4.96 years, respectively. Standard deviation scores (SDS) of height and weight were significantly lower among patients compared to controls. Mean fasting glucose levels were 75±15 mg/dL and 83±12 mg/dL among patients and controls, respectively (p=0.033). Insulin-like growth factor (IGF) 1 and its SDS were significantly lower among patients (p=0.010). There was no significant difference in ACTH and cortisol levels between groups. ACTH levels were very low in six patients. Oxygen saturation level was positively correlated with ACTH (p=0.041, r=0.439) and negatively correlated with HOMA-IR (p=0.046, r=-0.420) and insulin (p=0.017, r=-0.494). There was no difference in insulin resistance between groups. Chronic hypoxia has negative impact on growth by reducing IGF-1 along with the nutritional deficiency in children with cyanotic CHD. ACTHadrenal axis is also affected. While cyanotic CHD has decreased serum glucose level, it had no effect on insulin level and insulin resistance. Negative correlations between oxygen saturation, and HOMA-IR, fasting insulin levels, have suggested that these patients should be monitorized for insulin resistance.

Hypoxia results from imbalances between oxygen (O2) demand and supply. Congenital heart disease (CHD), a model of chronic hypoxia, is characterized by congenital structural and functional abnormalities of cardiovascular system identified during the birth or later. The incidence of CHD is 0.5-08% for all live births [1]. It has been shown that chronic hypoxia has many effects on the endocrine system. It affects mainly growth. There are many clinical and experimental studies investigating how and in what degree chronic hypoxia affects the growth [2,3]. The etiology of growth retardation (GR) in the patients with CHD is still unclear. GR may result from decreased energy along with loss of appetite, inadequate utilization of nutrients due to hypoxia, malabsorption due to intestinal venous congestion, and relatively increased nutritional demand or increased energy demand including frequent infectious diseases and increased oxygen demand [4]. It has been demonstrated that the level of insulin-like growth factor (IGF) 1 is lower in patients with CHD [5]. In recent years, possible effects of cyanotic CHD on endocrine hormones, as well as GR, have become interesting for many researches and several studies have been carried out. It has been also known that chronic hypoxia increases adrenocorticotropic hormone (ACTH) level and decreases catecholamine synthesis [6,7]. Chronic hypoxia has no effect on thyroid hormones or may reduce thyroidstimulating hormone (TSH) level [8,9].

In this study, we investigated the effects of cyanosis and chronic hypoxia on endocrine functions in the pediatric patients with CHD.

This study was performed in accordance with the approval of Ethics Committee of Medical School at the Uludag University (No 2009-12/118), and Helsinki Declaration criteria. The informed consents were obtained from the parents of all pediatric patients. Between October 2009 and October 2010, 30 patients with cyanotic CHD, who were admitted to the Pediatric Cardiology Outpatient Clinic of our institution, were enrolled in the study. Another 35 patients, who were admitted to the Pediatric Outpatient Clinic with several complaints, including headache or abdominal discomfort or for scheduled vaccination visits were included in the control group. Patients with Down syndrome, Turner syndrome, additional genetic or endocrinological disease including hypothyroidism, and renal or hepatic failure, those who were born less than 37 weeks of gestational age, and those with a birth weight of less than 2500 g were excluded from the study.

Diagnosis of cyanotic CHD was based on physical examination, echocardiography, cardiac catheterization and angiography in the cases indicated. The SO2 measurement was performed using noninvasive transcutaneous pulse oximeter (N-550, Nellcor, CA, USA). The SDSs of height and weight were also estimated [10]. The body mass index (BMI) was calculated as weight (kg) divided by square meter of height (m2).

The statistical analysis was performed using SPSS for Windows v16.0 software. The Shapiro-Wilk test was used to analyze whether data have been distributed normally or abnormally. Categorical variable frequency distribution was studied using Chi-square test. The Student’s t-test was performed to compare the continuous variables. The correlations between the variables were estimated using the Pearson’s correlation coefficient. A p value of 0.05 was considered significant. The arithmetic mean was expressed in mean±standard deviation (SD). 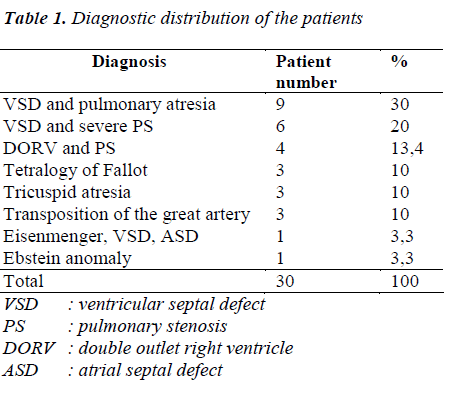 Table 1: Diagnostic distribution of the patients. 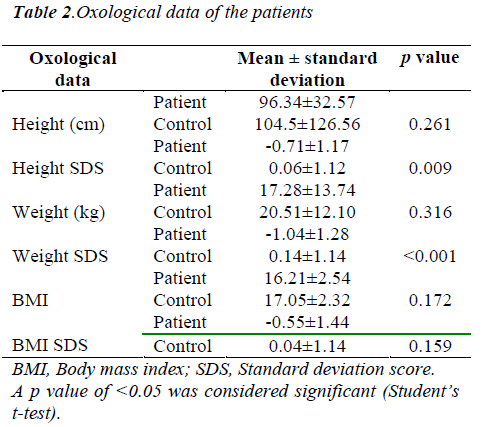 Table 2: Oxological data of the patients.

The mean serum glucose level of the patients and controls was 75 mg/dL and 83 mg/dL, respectively (p=0.033). The uric acid level was higher in the patient group (p=0.007). There was no significant difference between the groups in terms of urea, creatinine, ALP, Na, K, Ca, and P. The biochemical results are shown in Table 3. 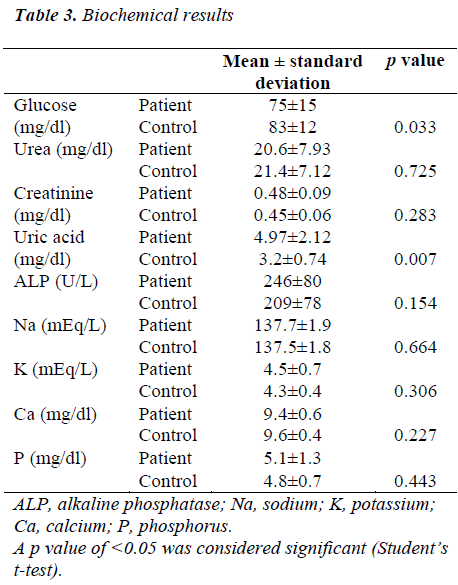 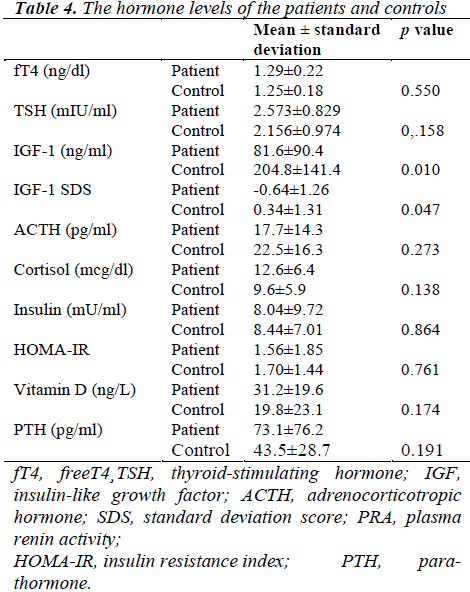 Table 4: The hormone levels of the patients and controls.

The hormone levels of the patients with cyanotic CHD were normal, while the level of IGF-1 and IGF binding protein 3 (IGFBP3) were lower [15,16]. Dinleyici et. al. [17] reported lower level of serum IGF-1 in 19 patients with cyanotic CHD, compared to the control subjects, and suggested that this might be explained by inhibiting the binding of growth hormone to its receptor in chronic hypoxia. In our study, we detected a significant decrease in serum IGF-1 and SDS of IGF-1 in patient group. In another study investigating the preoperative and postoperative growth rates in children with cyanotic CHD, authors reported increased BMIs, and thus increased IGF-1 level [18]. A positive correlation was indicated between the oxygen saturation and serum IGF-1 levels [11]. In our study, we did not find any association of oxygen saturation with the SDS of height, IGF-1 and SDS of IGF-1.

In an animal study, Steinbrech et. al. [19] reported a significant decrease in the osteoblast proliferation due to hypoxia in the neonatal mice. In a rat model, Pettinen et. al. [20] observed that tibia fracture recovered under low atmosphere pressure and an O2 pressure of 75 mmHg. This finding suggests that tissue hypoxia leads to delayed regeneration, reducing the collagen matrix synthesis and mineralization process. In our study, we detected no significant difference between groups in terms of serum Ca, P, ALP, PTH and vitamin D level, all indicators of healthy bone.

It has been established that hypoxia has an effect on adrenal cortex and plays a critical role in adrenal steroid synthesis. Effects of acute and chronic hypoxia on the anterior hypothalamus and adrenal cortex were investigated in rat and rabbit models, and it was detected that ACTH and cAMP secretions were increased due to acute hypoxia. The adrenocortical dysfunction of the rats with chronic hypoxia was observed. However, there was no association between hypoxia and ACTH level [21]. Chronic hypoxia effects on the adrenal function, which were observed in fetal lambs of a late gestational age, revealed that adrenal functions responded differently during chronic hypoxia. Adrenal medulla mRNA and protein synthesis were decreased with a significant reduction in the catecholamine synthesis, which indicated a blunted response of epinephrine under stressful conditions. It was also observed a significant decrease in nicotinic receptors of the adrenal medulla, but not in the glucocorticoid receptors [7]. Another study involving fetal lambs exposed to chronic hypoxia showed a higher level of response of the basal plasma ACTH concentration and cortisol [6].

On the other hand, a study involving adult male rats demonstrated hypoactivity in the pituitary-adrenal axis under chronic stress, suggesting that it might be related to decreased release of paraventricular corticotrophin-stimulating hormone [22]. In another study investigating the effect of chronic hypoxia on the chick embryos, an increase in the adrenal catecholamine with adrenocortical inhibition was observed [23].

In our study, there was no difference in ACTH and cortisol levels between groups. However, decreased ACTH levels with normal cortisol levels in six patients may be explained by central ACTH inhibition under stress. In our study, it was remarkable that as ACTH levels were reduced, the saturation was decreased, namely as disease severity was increased (p=0.041, r=0.439).

Several animal and human studies have shown that systemic hypoxia is associated with insulin resistance. A significant insulin resistance due to intermittent hypoxia was reported in the patients with obstructive sleep apnea [24,25]. It was reported that a lower level of plasma insulin was present in patients with cyanotic CHD compared to healthy subjects, suggesting that it might be due to impaired insulin secretion. Lundell et. al. [26] detected increased insulin secretion with normal level of plasma insulin, and decreased basal glucose level in the cyanotic patients. Authors concluded that patients with cyanotic CHD were prone to hypoglycemia, thus a special attention should be paid particularly in the postoperative period. Another study involving mountaineers with chronic hypoxia revealed a significant decrease in the blood glucose without any change in the plasma insulin level [22]. In our study, we detected statistically significantly lower level of glucose in the patient group. However, there was no difference between the groups in the HOMA-IR index showing the insulin level and insulin resistance. On the other hand, we detected a negative correlation between saturation level and HOMA-IR, insulin levels. Decreased glucose level under reduced saturation might be explained by higher level of energy demand for circulation and respiration. Increased insulin resistance might be interpreted as a preventive adaptation mechanism against hypoglycemia.

Hypoxia could activate some hormones, while deactivating others. It was detected that fT4 and TSH levels were decreased at 4 and 8 weeks with a significant decrease in the TSH level at 8 weeks in rats with chronic hypoxia. Then authors concluded that the axial impact was central due to decreased TSH level in hypoxia [9]. In another study involving mountaineers with chronic hypoxia, it was shown that fT4 levels were increased, while fT3 levels were decreased without any change in the TSH level at a high altitude [22]. Normal T4 and T3 levels were detected in another study involving seven cyanotic patients [27]. In our study, there was no difference in TSH and fT4 between the groups, indicating that the pituitary- thyroid axis was intact.

Our study results indicated that chronic hypoxia had a negative effect on nutrition and growth hormone, decreasing IGF-1 level in the patients with cyanotic CHD. There was a change in the pituitary-adrenal axis, while no change was observed in the pituitary-thyroid axis. Chronic hypoxia did not effect on the indicators of healthy bone. The serum glucose level was also decreased, but no effect of chronic hypoxia was observed on insulin level and insulin resistance in the patient group compared to the controls. In conclusion, further largescale studies are required to investigate the negative correlation between oxygen saturation and insulin resistance with a close monitoring of the patients for insulin resistance.