Evaluation of the diagnostic value of microRNA143b for osteoporosis

Objective: Osteoporosis has become a threat to patients’ health. The search for reliable biomarkers for the diagnosis of osteoporosis is of important clinical significance. microRNAs are involved in the regulation of various physiological and pathological processes. The current study aimed to investigate the potential diagnostic value of microRNA143b for early osteoporosis.

Patients and Methods: This study included 156 osteoporosis patients (69 mild osteoporosis and 87 severe osteoporosis) who were treated. Sixty-nine healthy volunteers were used as controls. Patients were given alendronate hydroxyethyl (5 mg/d) for 2 w. Normal Bone Mineral Density (BMD) is considered effective treatment. The microRNA143b level in blood cells was determined by quantitative Real-Time PCR (qRT-PCR) before and after the treatment. The association between microRNA143b level and osteoporosis was analysed by Pearson’s correlation test.

Conclusion: MicroRNA143b expression is closely associated with the severity of osteoporosis, and might be a specific biomarker for the disease.

Osteoporosis is a disease of decreased bone strength which increases the risk of a broken bone. It is a common disease, especially in the elderly and children [1]. Osteoporosis often leads to fractures and pain, and thereby seriously affects the quality of patients’ life [2,3]. Bone Mineral Density (BMD) is the current method for the diagnosis of osteoporosis. In 2015, WHO suggested diagnostic criteria based on the grades of BMD or Bone Mineral Content (BMC) of the axial or peripheral skeleton [4,5]. However, the method is timeconsuming, and is not sensitive in the diagnosis of early osteoporosis. Therefore, the development on an effective and reliable diagnostic method for osteoporosis is of great clinical significance [6,7].

Biomarkers can be used for accurate and sensitive evaluation of some early, low-level damages, and thus has provided valuable diagnostic values for clinicians [8]. Currently, biomarkers for osteoporosis have been frequently reported including several serum proteins such as sphingosine, periostin, fibroblast growth factor, etc. [2,6,8]. Nevertheless, the measurement of these biomarkers requires expensive detection kit and instrument, and thus is not suitable for less developed areas [9]. Some studies have suggested calcitonin as a marker for osteoporosis [10]. However, the method is not suitable for all patients. For instance, calcitonin level is quite low in some patients. Therefore, a reliable and sensitive biomarker is needed for effective diagnosis of osteoporosis.

MicroRNA are a class of small non-coding RNA molecules (about 22-nucleotide lone) that are involved in a wide range of physiological and pathological processes such as inflammation and even cancer thought the regulation of cell proliferation, growth and apoptosis. Recent studies have suggested microRNA-18a as a molecular marker for prostate cancer [11], microRNA 25, microRNA 145 and microRNA 210 as markers for lung cancer [12], and microRNA-200c-141 as a marker for human solid malignancies [13]. To date, there are quite few studies on the potential of microRNAs as biomarkers for osteoporosis [14,15]. While microRNA143b has been known to be involved in inflammatory response [12], the occurrence of osteoporosis is also closely associated with inflammation [13], suggesting that microRNA143b might be a biomarkers for osteoporosis. This study investigated the microRNA143b level in osteoporosis patients, and the correlation between and microRNA143b expression and the severity of osteoporosis in order to evaluate its diagnostic value for the disease.

A total of 156 osteoporosis patients who were treated in QiLu Hospital of Shandong University between January 2012 to January 2017 were selected for this study based on the following criteria: no age limit, no other medical history, primary osteoporosis, no history of chemotherapy or other treatment history causing osteoporosis. Osteoporosis was defined as previously described based on BMD [16,17]. The BMD of the axial or peripheral skeleton was measured using a DSC-600EVX ultrasound bone density meter (Hitachi Biotech, Japan). Patients with 600 g/cm2 ≤ BMD<1000 g/cm2 were defined as mild osteoporosis and those with BMD<600 g/cm2 were considered severe osteoporosis. Patients were given alendronate hydroxyethyl (5 mg/d) for 2 w. Normal Bone Mineral Density (BMD) is considered effective treatment. Sixty-nine healthy volunteers were used as controls.

The research was approved by the Ethic Committee of QiLu Hospital of Shandong University. All participants were required to sign the informed consent form.

Blood samples were collected from all participants before and after the treatment. Blood cells were isolated by centrifugation at 500 rpm for 6 min, and stored at -20°C.

Total RNA in blood cells was extracted using the Trizol reagent. RNA concentration was determined using a spectrometer under a wavelength of 260 nm. Total RNA was reverse transcribed into cDNA using a reverse transcription kit (Tiangen Biotech., Beijing) following the manufactures instructions. The level of microRNA143b was measured by qRT-PCR using cDNA as template and the following primers: microRNA143b forward: 5'- CTACAATGAGCTGCGTGTGG-3', reverse: 5'- AAGGAAGGCTGGAAGAGTGC-3'; actin forward: 5'- CTCAACTGGTGTCGTGGAGTCGGCAATTCAGTTGAG-3' and reverse: 5'- CTCAACTGGTGTCGTGGAGTCGGCAATTC-3'. The reaction mixture was prepared: 0.5 μl of cDNA, 1 μl of forward primer, 1 μl of reverse primer, 2 μl of dNTP mixture, 1 μl of reaction buffer, 0.25 μl of Taq enzymes, and 0.5 μl of cDNA template. The reaction condition was as follows: 95°C, 9 min, followed by 26 cycles of 95°C 45 s, 57°C 36 s, and 72°C 30 s, and 72°C10 min. The experiment was repeated three times. The PCR products were analysed by agarose gel electrophoresis. The intensity of bands was detected by a BDA BOX1 System (Boyue Instruments, China). The gray value of bands was analysed by Image J 1.48 u (National Institutes of Health). The relative expression level of microRNA143b was calculated as its grey value to that of actin.

Numeric data was subjected to normality tests and expressed as mean ± standard deviation. Statistical analysis was performed using SPSS 12.0 (SPSS Inc., Chicago, IL, USA). Differences among groups were compared by ANOVA and difference between groups were analysed by t-tests. Association between microRNA143b level and the severity of osteoporosis was analysed using Pearson's correlation test. P<0.05 was considered significantly different.

Comparison of microRNA143b expression before treatment 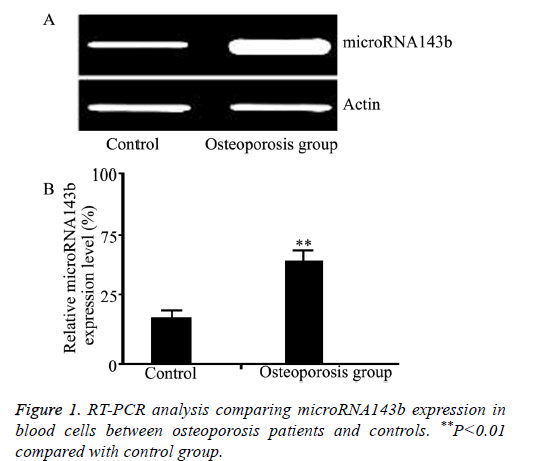 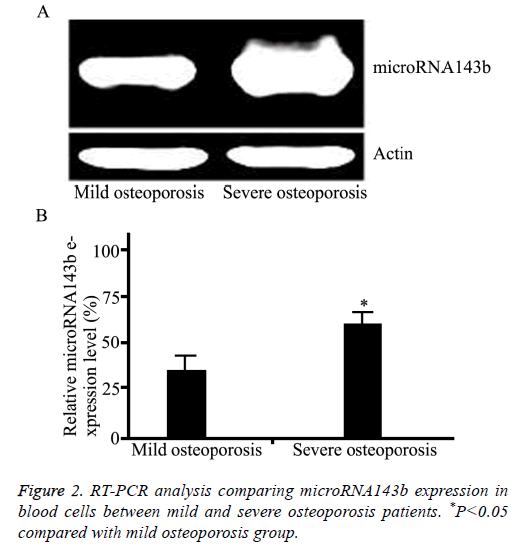 As shown in Figure 3, the treatment of alendronate hydroxyethyl significantly reduced the microRNA143b level in osteoporosis patients (P=0.0072). 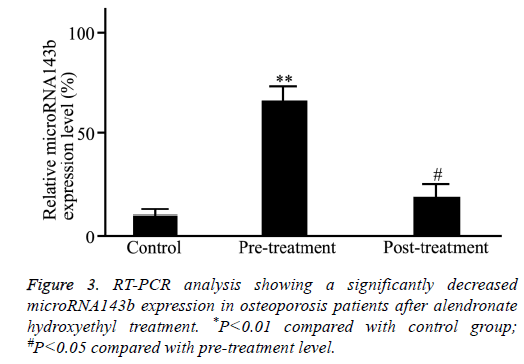 Correlation between microRNA143b level and the severity of osteoporosis

As shown in Figure 4, Pearson’s correlation test revealed a positive correlation between the microRNA143b level in blood cells and the severity of osteoporosis (r=0.91, P=0.011). 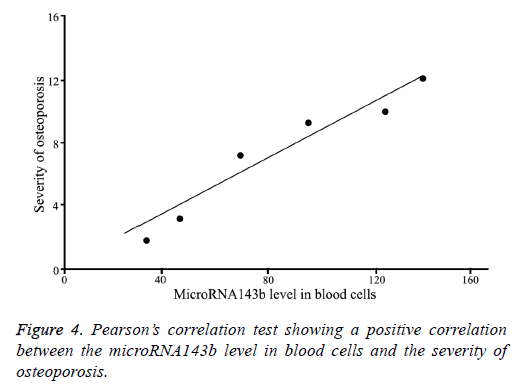 Figure 1: Relationship between serum iron and ascorbic acid in pregnant women in the 1st trimester.

MicroRNA143b has been known to be closely associated with inflammation of human body, and therefore might be involved in the occurrence and development of osteoporosis through inflammatory responses [20,21]. Furthermore, microRNA143b is one of the most important regulators in the nervous system, and plays an important role in the growth, development, and differentiation of neurons, and the regeneration of injured nerves [22]. Numerous studies have been performed on the application of microRNA143b in the treatment of nervous diseases such as peripheral nerve injury, peripheral neuropathy, optic nerve damage and Alzheimer's disease [22]. In addition, microRNA143b also maintains the balance among, immune and endocrine system. Decreased estrogen levels due to immune senescence can induce the changes in microRNA143b expression [18]. These findings suggest that microRNA143b might be involved in the development and progression of osteoporosis through the regulation on immune and endocrine systems. We therefore speculate that increased microRNA143b level induces immune disorders in the body, leading to apoptosis of bone cells, necrosis of bone tissues, and ultimately the occurrence of osteoporosis. Nevertheless, further mechanism studies are needed to validate our speculation.

In summary, microRNA143b expression is positively correlated with the severity of osteoporosis, and might be a specific biomarker for the disease.