Evaluation of the Bilichek transcutaneous bilirubinometer in the Chinese new-borns

Methods: TcB measurements were performed on the forehead by Bilichek and VanHou. Total serum bilirubin (TSB) was determined within 5 minutes after TcB measurement. The correlation and agreement between the two devices and TSB were assessed.

Conclusions: Bilichek has a good correlation with TSB. Furthermore, when TSB was lower than 12 mg/dl, Bilichek is superior to the VanHou obviously.

Jaundice is one of the most common symptoms during the neonatal period globally, which is reported to be more prevalent in Asian babies [1]. Usually, visual inspection, transcutaneous bilirubin (TcB) meter and the total serum bilirubin (TSB) are used to monitor jaundice in neonates. The determination of TSB levels is an invasive, costly and timeconsuming work. Moreover, repeated blood samplings may lead to significant blood loss, especially for the preterm infants. On the contrary, the TcB measurement is non-invasive, easy and rapid. It is reported that TcB reduced the need for blood sampling in neonates with visible jaundice [2]. TcB could also decrease the readmission rate for hyperbilirubinemia [3,4]. In previous studies, TcB has been shown a good relationship with serum bilirubin level in various ethnic neonates [5-7]. Bilichek, as a new second generation transcutaneous bilirubin meter, can distinguish the light absorption of bilirubin from haemoglobin and melanin by means of spectral subtraction theory. Hemmati et al. showed a strong correlation between Bilichek and TSB in the South of Iran (r=0.969, r2=0.94), independently of sex, gestational age, postnatal age, and birth weight [8]. They also found that this device tended to underestimate the level of bilirubin when TSB>15 mg/dl. Raimondi et al. concluded that Bilicheck, compared with BiliMed, was a reliable screening tool for hyperbilirubinemia in the multiracial neonatal population [9]. The aim of our study was to determine the accuracy and agreement of Bilichek with serum bilirubin concentration in Chinese new-born infants.

The study was conducted in the neonatal department at the Children's Hospital Zhejiang University School of Medicine. The study was approved by the local institutional review board. The inclusion criterion was the baby with the serum sample for the serum bilirubin or other items including serum bilirubin and no phototherapy in the 24 hours. Two hundred and three babies were consecutively enrolled from June to August 2014. The exclusion criteria were bruising, haemangioma or other skin anomalies at the reading location (13 cases) and indicating “out” by Bilichek (18 cases). Finally, 172 neonates were included (Figure 1). 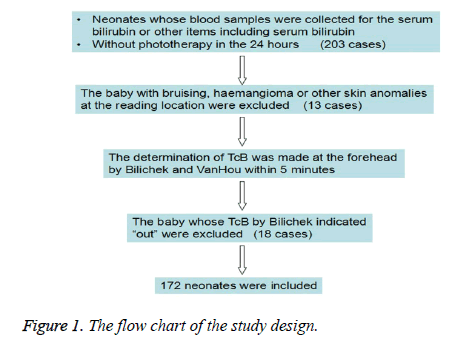 Figure 1: The flow chart of the study design.

Measurement of TcB and TSB

The determination of TcB was made at the forehead with the two instruments within 5 minutes, according to the manufacturer instructions. Bilichek (Children’s Medical Ventures, LLC, Monroeville, PA, USA) was calibrated before each measurement using a BiliCal™, and each measurement was performed with two readings in different points of neonatal forehead. VanHou (Vanhou Medical Equipment Ltd, Wuhan, China) was used on the forehead performing two readings too. Each device was used by one neonatologist unaware of the other one’s results and the TSB level. The blood sample for measurement was obtained by radial artery puncture, within 5 minutes after TcB measurement. The TSB was assayed with direct spectrophotometer after centrifugation.

The mean of the transcutaneous bilirubin was compared with the serum bilirubin concentration. The relationship between transcutaneous and serum bilirubin values was determined using linear regression analysis. The strength of this relationship was quantified by the Pearson correlation coefficients. The agreement between TcB and TSB was assessed by the method of Bland-Altman. Furthermore, receiver operating curve (ROC) was used to assess the predictive ability of the two studied devices. Excel (Microsoft Office Professional 2003) and SPSS Statistics 17.0 were used for statistical calculations and graphs. 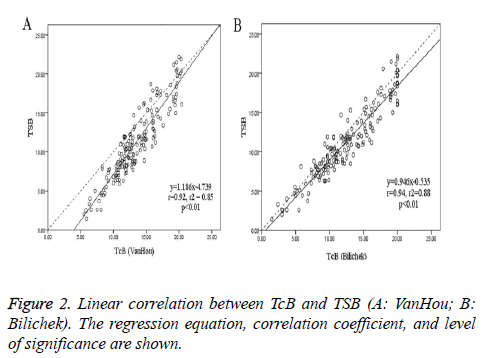 Figure 2: Linear correlation between TcB and TSB (A: VanHou; B: Bilichek). The regression equation, correlation coefficient, and level of significance are shown.

Table 1: Characteristics of the study population

Bland-Altman plots of TcB vs. TSB were shown with regression line in Figure 3. At low bilirubin concentrations, TcB (VanHou) was higher than TSB; whereas at higher bilirubin concentrations, it tended to be lower than TSB. But the difference of the TcB (Bilichek) and TSB was relatively constant over the range of TSB. Mean of the differences and 95% agreement limits of the Bland-Altman bias plot were shown in Table 3. The mean differences between TcB and TSB (VanHou 2.3 mg/dl; BiliChek 1.2 mg/dl) could be considered clinically small. However, 95% agreement limits of the Bland- Altman bias plot showed a relatively large range, especially for the VanHou (-1.5 ~ 6.0 mg/dl). 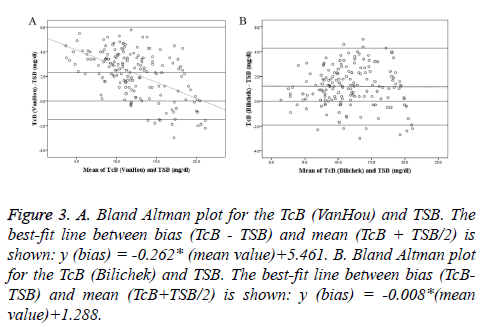 Table 2: The difference of TcB and TSB.

Table 3: Mean of the Differences and 95% Agreement Limits of Bland- Altman Bias Plot.

Figure 4 reported ROC curves for the two transcutaneous bilirubin meters with the TSB value of 9, 12 or 15 mg/dl. The areas under the curve and the sensitivity, specificity of the TcB at various clinically relevant cut-off points were showed in the Table 4. At cut-off points of TSB (9, 12 or 15 mg/dl), Bilichek performed better than VanHou. 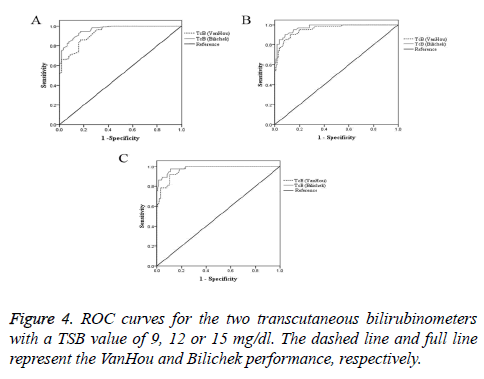 Figure 4: ROC curves for the two transcutaneous bilirubinometers with a TSB value of 9, 12 or 15 mg/dl. The dashed line and full line represent the VanHou and Bilichek performance, respectively.

Table 4: Sensitivity, specificity, and area of the chosen cut off TcB.

There were a large number of studies about the evaluation of Bilichek on the hyperbilirubinemia. Bilichek was regarded as a sensitive screening method for hyperbilirubinemia in term or preterm new born [10-12]. However, there were few studies about Bilichek in Chinese population, especially for large sample study. In our study, we provided the comparison of Bilichek and VanHou (one kind of transcutaneous bilirubin meters used in China commonly) in the Chinese new-borns.

The relation between TcB and TSB

In our study, the correlation of TcB derived from BiliChek and VanHou with serum bilirubin were 0.94 and 0.92 respectively. This result was better than another Chinese study of Bilichek by Ho EY et al., which reported a coefficient of 0.757 for forehead measurements, and 0.794 for sternum [18]. Moreover, the mean differences between TcB and TSB were VanHou 2.3 mg/dl, BiliChek 1.2 mg/dl respectively. So it is considered that both of Bilichek and VanHou are reliable screening tools for hyperbilirubinemia in Chinese population.

Looking at the Table 2 and Bland Altman plots, most of the TcB from both of two devices was higher than TSB. It was contrary to the results by the study of Conceicao et al. [19]. They found the mean TcB was lower than the TSB (8.6 vs. 10.2, p<0.05). In our study, the difference between TcB and TSB became smaller while the TSB was higher. Especially, when TSB>15 mg/dl, the TcB had a tendency to underestimation the bilirubin level. Hemmati et al. also found that TcB tended to underestimate the level of bilirubin when TSB>15 mg/dl [3]. Therefore, we should take the blood sample for TSB when the jaundice is severe.

The transcutaneous Bilirubinometer should be sensitive to prevent the kernicterus. Furthermore, the device must also have a desirable level of specificity because over diagnosis leads to unnecessary admissions and unexpected complications. The conventional phototherapy was suggested when the bilirubin level got to 9 mg/dl for the neonates in the first 24 hours after birth, and 12 mg/dl for the neonates in the first 48 hours after birth, according to the guidelines for the management of hyperbilirubinaemia in new-borns by American Academy of Paediatrics (AAP) Subcommittee on Hyperbilirubinemia [20]. A small difference between TcB and TSB might change the medical plan. As a result, we suggested that, in Chinese baby, Bilichek was more accurate than VanHou because of fewer false positive, especially when the TSB was lower than 12 mg/dl. However, the Bilichek was calibrated with BiliCal before every measurement and took the average of 5 readings. As a result, the Bilichek was more time consuming and much more expensive than the VanHou.

Limitation of the study

In this study, the sample size of the severe jaundice was small. It is reported that the good correlation between TcB and TSB might be related with the large number of relatively low bilirubin level [17,21]. Furthermore, the sample size of the preterm was small. We have found that when TSB ≤ 12 mg/dl, the bias of TcB and TSB from the VanHou was much higher than Bilichek. This range of bilirubin level has great clinical importance in the preterm. So, we should carry out another study in preterm in the future.

The findings of the present study indicate that the Bilichek has a good correlation with TSB. Furthermore, when the bilirubin levels ≤ 12 mg/dl Bilichek is superior to the VanHou obviously. Finally, for the neonates with TSB>15 mg/dl, both of the two devices tend to underestimate the level of bilirubin.

This study was supported by Grants from National Natural Science Foundation of China (81401235).