Evaluation of polymerization shrinkage of dental composites by microcomputed tomography

Objective: The aim of this study was to evaluate the polymerization shrinkage of different commercially available dental composites with micro-computed tomography (μ-CT).

Results: Data were analyzed using Kruskal Wallis, Mann Whitney U and Wilcoxon test at a significance level of α=0.05. Polymerization shrinkage ranged between 1.44% (CMF) and 2.73% (CHF). Bulk-fill and Self-adhesive composites were significantly lower (p<0.05) than those of the others.

Conclusion: All tested materials were able to achieve acceptable shrinkage at 2-4 mm depth. The higher shrinkage of hybrid composites over that of other groups may indicate a potential for higher interfacial stresses. However, the bulk fill composite showed low shrinkage that may prove less damaging to the interface.

Polymerization shrinkage depends on many factors such as filler load, type of filler particles, monomer system, prepolymerized particles, etc. [6]. The filler content and resin matrix composition detect the amount of volumetric shrinkage of the resin composites [7]. Furthermore, Kleverlaan et al. showed a higher filler load decreases the amount of resin in the resin composite and, therefore, a decrease in shrinkage [8]. In this study, the CHF group with a filler ratio of 62 % has higher polymerization shrinkage than the others. Therefore, these findings are evidence of the relationship between filler ratio and shrinkage.

Polymerization shrinkage of composite resins is realized in two phases. These are the pre-gel phase, where the composite resin is transformed from the viscose state to the gel state, and the post-gel phase, also called hard phase, where the gel form is hardened [11]. The volumetric change in the shrinkage of the composite resin during the transformation from the viscose state to the gel state is higher than the change that occurs in the second phase. During the first phase of the polymerization shrinkage, since the resin is flowable, it could permeate into the cavity and the cavity walls, and the stress is lowered. Shrinkage could be balanced with the flowable nature of the composite resin. In the second phase of the polymerization, the movement is halted and the stress could not be met [12-17].

Shrinkage during polymerization causes tension in areas where the composite bonds with dental tissue, which results in micro-level gaps between the filling and dental tissue. Bacteria, fluids and ions could accumulate in these gaps. These micro-gaps enlarge due to temperature changes and stress, resulting in coloring, secondary caries, restoration fractures, post-operative sensitivity and followed by pulpal pathologies in the future [12,18,19].

The materials investigated and the tests carried out for each of them are listed in Table 1.

Table 1: Materials used in this study.

Preparation of the samples

Teflon molds to prepare the samples, and LED (Elipar Freelight, 3M ESPE) light source to polymerize the materials were used. Two different molds were prepared. 2 × 6 mm standard molds were used for Clearfil Majesty Flow, Vertise Flow, Grandio Flow and Filtek Supreme Ultra Flow. Also, 4 × 6 mm standard molds (Figure 1) were used for bulk fill composites that could be used as dentin replacement and that could be applied to the cavity up to 4 mm thickness (Surefill SDR Flow, Filtek Bulk Fill and X-Tra Base Flowable). In the control group, one type of standard flowable composite resin (Filtek Supreme Ultra Flowable) was utilized. A total of 10 samples in each group were prepared. 80 samples were prepared for 8 groups in total.

Figure 1: Teflon molds and components used in this study.

Scanning of the samples with μ-CT

Firstly, the μCT was calibrated using a phantom standard at 70 Kvp/BH 200 mgHA/ccm. After composite resins were placed in standard molds, samples were scanned for 1 h in μ-CT - Skyscan 1172. The μ-CT projection images were acquired at 100 kVp, 450 mA, 9 m pixel size, 1 milliamperes, 360 degrees reconstruction angle, 2 degrees rotation angle and a resolution of 90 μm before LED-light polymerization. The average of the total number of slices was 512, with an average scan time of 1 h. The μ-CT images were reconstructed to give a volume data set. The kVp and exposure time were kept consistent for all samples. The 2D projections acquired were elaborated to generate the volume of interest. Acquired μCT data were evaluated with μ-CT CTAn software programme after image Reconstruction. Shrinkage was not observed during scanning since the inner compartment (Figure 2) of the equipment was totally dark. After the material was scanned, it was polymerized according to the producers’ recommendations and then rescanned with Skyscan 1172 equipment using the previous parameters. Finally, polymerization shrinkage of the created three dimensional objects was analyzed. 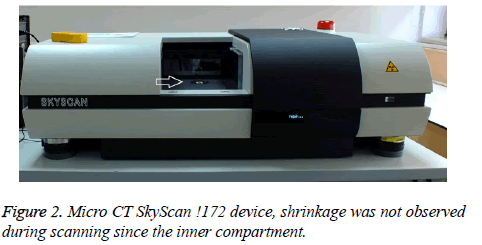 Figure 2: Micro CT SkyScan !172 device, shrinkage was not observed during scanning since the inner compartment.

Analysis of the scanned samples with μ-CT

V1=Volume of the sample before polymerization

V2=Volume of the sample after polymerization 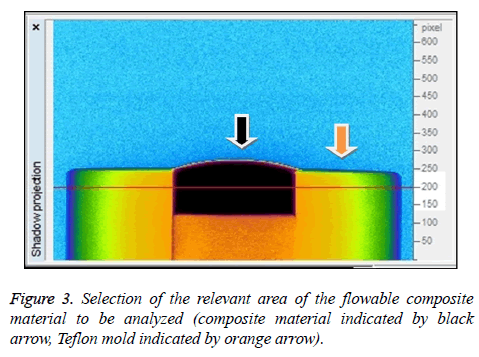 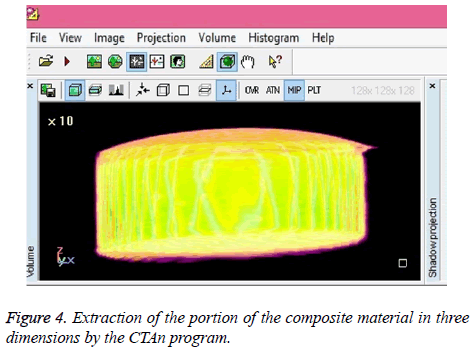 Figure 4: Extraction of the portion of the composite material in three dimensions by the CTAn program. 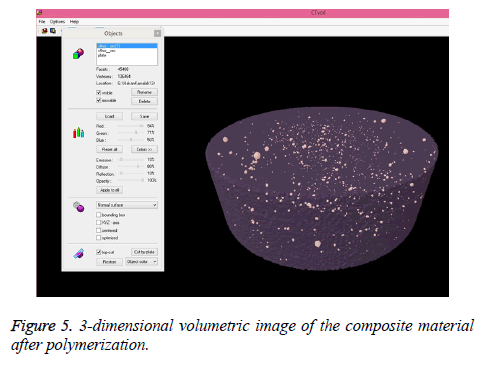 Figure 5: 3-dimensional volumetric image of the composite material after polymerization. 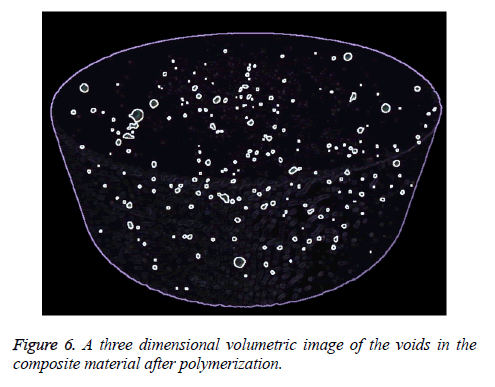 Figure 6: A three dimensional volumetric image of the voids in the composite material after polymerization.

Table 2: Evaluation of the average of the materials’ volume for each group. 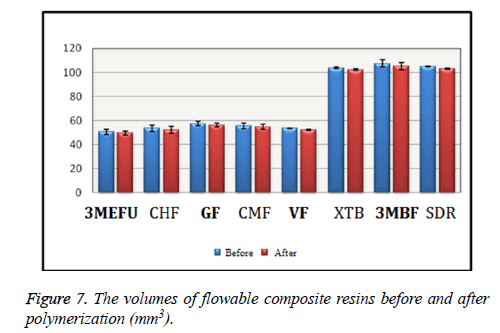 Figure 7: The volumes of flowable composite resins before and after polymerization (mm3). 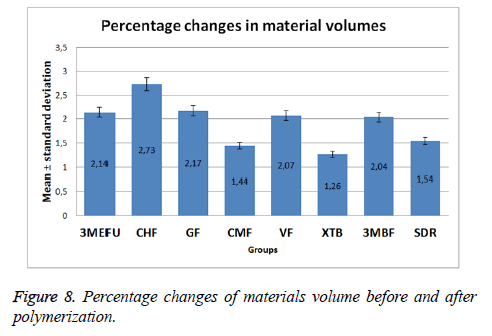 Figure 8: Percentage changes of materials volume before and after polymerization.

Flowable composite resins are widely used today as restorative materials due to their physical characteristics, changes in their formulations, their ease of application, their perfect adaptation in covering the defects in cavities and cavity walls.

Different methods such as Coordinate Measurement Equipment, Optical Coherence Tomography and Archimedes Principles were used to determine polymerization shrinkage of restorative materials. SkyScan 1172 desktop X-ray μ-CT equipment was used in this study to analyze the polymerization shrinkage of the materials [21]. This system enables the analysis of materials in three dimensions in coronal, sagittal and axial directions and in minute detail.

While clinical CT equipment could typically produce images that are formed by 1 mm3 volume voxels, X-ray Computed Tomography (Micro-CT or μCT) systems, developed during the early 1980’s, produce higher resolution images with 1,000,000 times smaller voxels volumetrically [24]. After the samples are immobilized within the equipment, they are scanned by a stationary x-ray source while they are rotated on the vertical axis [25].

Pre-process and post-process volumes of the material could be determined aright by using a micro-CT device. Latest versions of these systems allow even the examination of small living animals [26].

In a study by Bukovinszky et al., polymerization shrinkage, elastic module related to shrinkage, degree of conversion and shrinkage stress were evaluated. Three different flowable composite resins and a composite resin without filler (Charism Flow, SDR, Filtek Ultimate) were used in that study. Degree of conversion was measured by FT-IR spectroscopy, while the volumetric shrinkage was calculated using the Archimedes principles. At the end of the study Charisma flow composite resin displayed high shrinkage, low elastic module and high degree of conversion [34]. In this study, volumetric shrinkage was assessed using Micro-CT Skyscan 1172 and CTAn software. Shrinkage amount for Charisma Flow was observed to be significantly higher than other groups. Charisma Flow contains less filler content percentage when compared to other material. Thus, it could be considered that the high level of shrinkage in Charisma Flow could be due to the low filler content.

Deb et al. researched polymerization shrinkage of dental composite material in their study. It was found that Filtek Supreme composite displayed more shrinkage (2% in average) than other material [38]. Similarly, in this study the shrinkage (2.04 ± 0.47%) of the material was observed as higher than other groups (SDR, XTB and CMF).

Lee et al. determined the polymerization shrinkage using Positron Sensitive Photo Detector (PSPD) equipment in their study. 7 different flowable composite resins were used in that study. They have determined that Filtek Flow demonstrated shrinkage at the value of 2.24% (0.67) [40]. In this study, where μ-CT equipment was used, the shrinkage amount for Filtek Flow was calculated as 2.14%. Differences in the equipment used, the molds used during the preparation of the samples and the homogenous placement of the material into the molds could be effective in obtaining different results in different studies.

In their study, Leprince et al. scrutinized the mechanical specifications of bulk fill composite resins. They have calculated the degree of conversion of the material using Raman Spectrophotometer, the elastic module using threepoint test, the surface hardness using Vickers Micro Hardness test, and filler content using Thermo-Gravimetric Analysis. They have found the percentage filler content for X-tra Base as 74.4%, for SDR as 69% and for Filtek Bulk Fill composite as 60.7%. They determined that the degree of conversion was the highest for SDR and the lowest for Filtek Bulk Fill. However, they also determined that elastic module was the highest for X-tra Base [42]. In this study, shrinkage amount for X-tra Base composite was determined as lower than other composites (SDR, 3MBF, VF, CMF, GF, CHF ve 3MEFU).

Milena et al. assessed the shrinkage stress of 3 different flowable composites. Grandio Flow, Filtek Supreme, Tetric Flow, and one Universal micro hybrid composite (Filtek Z250, 3M ESPE, St. Paul, MN, USA) as the control group were utilized. Shrinkage stress was measured using stress analysis measurement equipment. The highest polymerization shrinkage was observed for Filtrek Supreme [39]. In this study, more shrinkage was found for Grandio Flow when compared to Filtek Supreme composite. The findings of this study do not support the findings of Milena et al. The difference could be due to the differences in the measurement techniques.

Polymerization shrinkage of the material could be affected by the type of the material, matrix content, filler ratio and filler content. Further knowledge has been obtained on flowable composites that have been increasingly used as permanent restorative material in dental clinical applications as a result of this study.

We would like to express gratitude to our supervisor Muhammet Yalçın for the useful comments, remarks and engagement through the learning process of this research. Meanwhile, this research was supported by the Scientific and Technological Research Council of Turkey (TÜBİTAK /Project ID: 114S231).