Introduction: Osteoporosis is a widespread age-related skeletal disorder characterized by bone loss, which increases skeletal fragility. This study was done to assess the relationship between CTX1, MMP and OPN levels and BMD in postmenopausal Egyptian women.

Patient and Methods: This search was made on 173 postmenopausal female. MMP-3, OPN and CTX I was done by ELISA. BMD was carried out by dual energy X-ray absorptiometry. According to BMD; they were divided into 3 groups; osteopenia, osteoporosis and control groups.

Results: CTX1, OPN and MMP-3 levels were significantly greater in osteoporosis and osteopenia than the control group (P<0.001). In osteoporosis, negative correlations between OPN, calcium and BMD, were found as well as positive correlations between OPN, MMP-3 and CTX-I. By using ROC curve, the sensitivities of both OPN and MMP-3 were equal (93%) and specificities were 100% and 84% respectively.

Osteoporosis is a major health problem as dealing with it is very deficient concerning its diagnosis and treatment [1]. Women are more susceptible to osteoporosis than men presenting approximately 80% of all patients with osteoporosis. Generally, women have smaller and thinner bones than men as there is a sharp decline in production of oestrogen after menopause [2]. The method by which decreased level of oestrogen causing bone loss is not clear yet [3]. Bone radiological studies are of little predictive utility, because biochemical changes precede radiological changes. Dual Energy X-Ray Absorptiometry (DEXA) is the standard method to determine bone mineral density. It provides information on changes in bone mineral contents. It is useful for follow up of bone mass or for the study of bone mass changes in the same patient [4].

Matrix Metalloproteinase-3 (MMP-3) is called also stromlysin-1, which is released by osteoblasts. As oestrogen deficiency occurs osteoblast is motivated by osteoclasts. Osteoclasts (OC) resorb bone over a period of 3 weeks, creating cavities that are termed as remodelling space. The resorption is followed by Osteoblast (OB) activation and osteoid formation, filling the cavities over a period of 3 months. So, MMP-3 is released in extra concentrations in matrix around osteocyte and its lacuna in order to take role in collagen and cartilage metabolism [3,5]. In pre-mature bone tissue, non-collagen was altered by OPN/MMP-3 complexity before mineralization of bone matrix so as to keep local micro circumstance by protein-lyses of complexity. It occurs in osteoporosis enhanced by osteoclasts As osteoblasts is creeping and persisting in states with increasing mineralization and high bone turn-over [6,7].

Approximately 90% of the organic matrix of bone is type I collagen, a helical protein that is cross linked at the N- and C-terminal ends of the molecule. During bone resorption, osteoclasts secrete a mixture of acid and neutral proteases that degrade the collagen fibrils into molecular fragments including C-terminal telopeptide (CTx). As bone ages, the alpha form of aspartic acid present in CTx converts to the beta form (beta- CTx). Beta-CTx is released into the bloodstream during bone resorption and serves as a specific marker for the degradation of mature type I collagen. Elevated serum concentrations of beta-CTx have been reported in patients with increased bone resorption. The major drawback of CTX is its circadian difference so the samples required should be taken in the morning while fasting for accurate results [8].

The aim of the study was to determine markers of increased risk of osteoporosis occurring in postmenopausal females by assaying CTX1, MMP-3 and OPN levels and determination of their correlations with Bone Mineral Density (BMD) in postmenopausal women. The study may support the identification of females at high risk of osteoporosis in order to implement early prevention.

This study was done at Clinical Pathology, Biochemistry and Internal Medicine Departments, Menoufiya University Hospitals, Faculty of Medicine, in the duration between March 2013 and June 2015

The study included 116 postmenopausal women from those attending the Outpatient Clinic of Internal Medicine Menoufiya University Hospitals in addition to 56 apparently healthy postmenopausal volunteers. All women were subjected to: Complete history taking, detailed physical examination, blood pressure, Body Mass Index (BMI) as calculated by dividing the subject's weight by the square height (BMI=weight in kilograms/height in meters2). Laboratory investigation of fasting blood glucose, calcium, phosphorus, lipid profile and kidney function tests, OPN, CTX-I and MMP3. BMD was measured using ’Lunar Achilles Express’’ QUS examination. BMD values were given as g/cm2 and the results were reported as T-scores (standard deviation above or below values for young healthy population). Subjects sharing in this study were classified into three groups according to WHO classification (1994) using T-score (≥ 1: normal, -1 to -2.49: osteopenia and -2.5 or less: osteoporosis). Low BMD (osteopenia and osteoporosis) was considered if the T score is of -1 or less as follows: group I consisted of 66 postmenopausal women suffering from osteopenia, group II consisted of 67 postmenopausal women suffering from osteoporosis and group III consisted of 40 apparently healthy women as a control group.

The study design was accepted by the local Ethics Committee. Informed consents were obtained from the shared women.

Sampling: Samples are taken under complete aseptic conditions, after an overnight fasting; 5 ml venous blood were collected in a sterile plain tube and allowed to clot at 37ºC. Serum was separated by centrifugation and put into two tubes; one for immediate assay of fasting blood glucose, calcium, phosphorus, lipid profile and kidney function tests. The other tube was divided into three aliquots and kept immediately at -80ºC until assay of mmp3, OPN and CTX-I.

Measurements of serum osteopontin: Human Osteopontin ELISA (Aviva Systems Biology Corporation San Diego, CA 92121,USA) using a quantitative technique “Sandwich” ELISA where the target protein (antigen) is bound in a “sandwich” format by the primary capture antibodies coated to each well-bottom and the secondary detection antibodies were added subsequently. The absorbance was read by the spectrophotometer. Concentrations were calculated according to the standard curve.

Measurements of serum CTX-I: using Abnova Human ELISA kit (www.abnova.com). The microtiter plate provided in this kit has been pre-coated with an antibody specific to CTX-I. The concentration of CTX-I in the samples is calculated by comparing the O.D. of the samples to the standard curve.

Bone mineral density: Bone mineral density measurement was done on one-leg of all study participants, with the subject in the sitting position, using a water-based Achilles Express ultrasonometer “Lunar Achilles Express” QUS examination. The patient’s result is expressed as a T-score and Z-score as a percentage compared to the reference population. The diagnostic criteria for osteopenia/osteoporosis in the studied subjects was characterized according to WHO classification (1994) using T-score (≥1: normal, -1 to -2.49: osteopenia and -2.5 or less: osteoporosis).

SPSS program version 16 was used to analyse the results. One way ANOVA (F test) and Kruskal-Wallis test were used to collectively indicate the presence of any significant difference between several groups for quantitative variables. Post hoc test was used after one way ANOVA (F-test) or Kruskal-Wallis test to show any significant difference between the individual groups. Chi-Squared (χ2) was used for qualitative variables. P value<0.05 is considered significant. Receiver Operating Characteristic (ROC) curve was done. 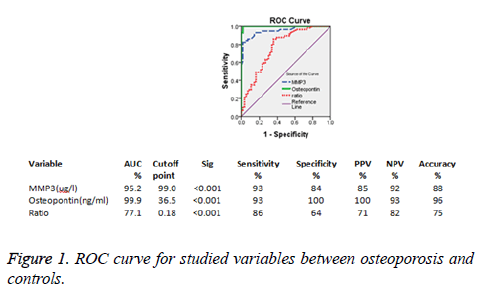 Figure 1: ROC curve for studied variables between osteoporosis and controls. 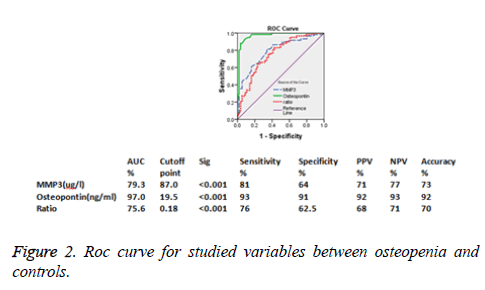 Figure 2: Roc curve for studied variables between osteopenia and controls.

Table 1. Characteristics and laboratory results of the studied groups.

Table 2. Correlation between osteopontin and other parameters in the postmenopausal women with osteoporosis group.

In the present study, the highest level of MMP-3 was recorded by the group of osteoporosis, followed by osteopenia and lastly normal group. Regarding OPN/MMP ratio, there were greater statistical significant difference between osteopenia and normal group as well as osteoporosis and normal group. Meanwhile, no statistical significant variance was detected between osteopenia and osteoporosis group. Our results were partially in accordance with Dai [3]. He studied MMP and OPN/MMP ratio in osteoporosis, osteopenia and normal groups, found significant statistical significant differences in the studied groups regarding both parameters. Matrix Metalloproteinase (MMP) has a family of zinc-dependent proteinases which take role in many pathological and physiological functions as embryonic development, formation of new blood vessels, wound repair, periodontal disease, autoimmune arthritis, cancer occurrence and spread. Matrix Metalloproteinase (MMP) which is secreted by osteoblast have a role in bone metabolism by degradation of the bone matrix.MMP-3 affects bone resorption by degrading denatured type collagen and other constituents of the bone organic matrix. Many evidences were found to confirm the critical role of MMPs which are secreted by osteoblast in the initiation of bone resorption together with bone formation through degrading the mineralized osteoid layer of the bone surface to permit osteoclasts to fix themselves to the mineralized matrix. In vitro [14,15], normal osteoblasts secrete copious amounts of MMP-3 under the influence of OPN, then OPN/MMP-3 complex enhance bone matrix ossification before bone mineralization. MMP3 could destroy extra-cellar matrix of bone, especially in postmenopausal osteoporosis. In low oestrogen concentration, MMP could enhance osteoclasts maturation, immigration and sticking along with degrading the matrix [3].

Our results discovered that the concentrations of CTX in both groups of osteopenia and osteoporosis were significantly increased than the controls. These results are in line with a study done by Im et al. [16] and Al-Daghri et al. [2]. Bone is made of a calcified organic matrix that contains 90% type I collagen. During bone resorption, type I collagen is degraded, and small fragments are liberated into the blood stream. Higher CTX-1 levels are associated with lower bone mineral density values in osteoporosis [17]. This is consistent with our findings, indicating a high rate of bone resorption in osteoporotic females.

Our study addressed the relationship between serum OPN concentrations and BMI, calcium, ALP, CTX I, MMP3 and BMD in postmenopausal females with osteoporosis. Our data showed no statistical significant correlations between OPN and BMI. The results revealed by Cho et al. [18] were not able to show a relation between serum OPN levels and BMI. Meanwhile, Chang et al. [13] found a negative correlation with body weight, height. Moreover, Osteopontin levels were positively correlated with MMP-3 and OPN/MMP3 ratio. Dai et al. stated that MMP-3 was probably the initiating factor of postmenopausal osteoporosis and the OPN-MMP-3 complex was probably the connection to discover the start of postmenopausal osteoporosis. Osteopontin concentrations were negatively correlated with BMD as well as the level of serum calcium and positively with CTX. Also, there was a study involved a 124 postmenopausal females this study confirm that osteopontin levels were a risk factor for occurrence of osteoporosis in menopause. Serum OPN concentrations were positively correlated with bone resorption marker such as carboxy-terminal collagen cross links [13]. Also, our results were in accordance with the results obtained by Fodor et al. [5] and yang et al. [19].

By using ROC curve between the normal & osteoporotic groups, the cut-off value of OPN for osteoporosis was 36.5 ng/ml. In a study done by Fodor et al. the cut-off values of OPN for osteoporosis diagnosis were of 9.47 ng/ml. The cutoff value of MMP-3 was 99 ng/ml. The cause of discrepancies between human studies might be due to the type of samples, age, race and changes in types of detection kits [20]. MMP-3 and OPN were equal in sensitivity (93%) meanwhile OPN was higher in specificity than MMP-3 (100% and 84% respectively). We concluded that OPN is more specific marker to osteoporosis so it could help in its diagnosis. Meanwhile, combined measuring of OPN, CTX and MMP could help in early detection of osteoporosis. As there is positive correlation between CTX and OPN.