Aims: Non-alcoholic fatty liver disease (NAFLD) is an increasingly recognized cause of chronic-liverdisease which may be diagnosed incidentally in asymptomatic patients. Non-alcoholic steatohepatitis (NASH) may cause cirrhosis and hepatocellular carcinoma. To date, no established non-invasive test exists to accurately predict fibrosis in NASH. Although liver biopsy is the gold standard for the diagnosis of NASH, it occasionally has some serious complications. We aimed to compare the diagnostic accuracy of some widely used non-invasive fibrosis scoring systems.

Methods: We retrospectively assessed the files of 40 subjects with biopsy proven diagnosis of NAFLD. The subjects were grouped as mild and advanced fibrosis. Demographic, medical historical, and laboratory data were recorded. FIB4 index, APRI-, BARD-, and BAAT-scores were calculated. The agreement between biopsy findings and non-invasive scoring systems was assessed with Kappa statistics.

Results: 17 of the patients (58% males, mean age 58.8 years) had advanced fibrosis while 23 of them had mild fibrosis (52% males, mean age 54.5 years). Patients with advanced fibrosis had significantly higher AST and fasting glucose levels and waist circumferences (p<0.05 for each). None of the studies noninvasive scoring systems had a strong or independent correlation with biopsy findings. BAAT and BARD scores were relatively sensitive (88.9% for each) but non-specific (12.9 and 35.5, respectively), APRI score was highly specific (95.7%) but non-sensitive (35%), and FIB4 score was moderately sensitive (65%) and specific (69.6%) to detect advanced fibrosis.

Non-alcoholic fatty liver disease (NAFLD) is characterized with hepatocellular accumulation of triglycerides in patients with alcohol abuse less than 30 g/day. NAFLD involves two different clinical conditions including non-alcoholic fatty liver (simple steatosis) and steatohepatitis (NASH). NAFLD is associated with metabolic syndrome, obesity, diabetes and hyperlipidemia; non-alcoholic fatty liver disease is observed in 80% of the patients with metabolic syndrome. While simple steatosis is observed in approximately 30% of the general population, steatohepatitis is observed with a lower rate (5%) [1,2]. Progression to cirrhosis is observed in 20-25% of the patients with steatohepatitis and a risk for hepatocellular carcinoma exists in 5% [3]. NAFLD is generally asymptomatic and is found during routine screening with increased serum transaminase levels and/or increased liver echogenity in USG. The golden standard is liver biopsy in the diagnosis and staging of NAFLD and in the differentiation of simple steatosis and steatohepatitis. The negative aspects of liver biopsy can be listed as follows: it is an invasive procedure, sampling may be insufficient, sampling may be performed in an inappropriate site and the result may be assessed erroneously [4,5]. Therefore, many non-invasive methods have been developed in staging of NAFLD [6]. These tests include routine laboratory parameters, specific direct fibrosis markers and methods including elastography [7,8]. The BAAT score (body mass index, ALT, triglyceride), FIB4 index (age, ALT, AST, platelet count), BARD score (body mass index, ALT/AST, presence of DM), APRI score (AST, PLT), Fibrotest, FibroScan and European liver fibrosis score (ELF) are examples of the methods. In this study, it was aimed to evaluate the non-invasive methods as indicators of fibrosis in patients who were found to have NAFLD and to compare the diagnostic values of these methods as indicators of fibrosis.

Patients aged between 18 and 65 years who presented to our Gastroenterology-Hepatology outpatient’s clinic between 2001 and 2013 with different complaints and had hepatosteatosis on abdominal ultrasonography (USG) and underwent liver biopsy were included in the study and their files were retrospectively examined. Our exclusion criteria were as follows: history of alcohol consumption (>30 g/day); HBsAg and/or anti-HCV positivity; autoimmune hepatitis, Wilson’s disease, hemochromatosis, or other chronic liver diseases; and use of steatogenic drugs (corticosteroid, methotrexate etc). 40 patients were included in the study. The following study parameters and liver biopsy results were recorded. AST, ALT, GGT values, fasting insulin, fasting glucose, lipid profile (HDL, LDL, triglyceride and total cholesterol) and TSH values, leukocyte count, platelet count, hemoglobin level, age, gender, height, weight, waist circumference, drugs used (antihypertensive, antidiabetic etc) were recorded as the study parameters. Insulin resistance (IR) was calculated using homeostasis model assessment (HOMA) method [(fasting plasma glucose mg/dl/18) × (fasting insulin level mIU/ml/22.5)]. A HOMA-IR of ≥ 2.5 was considered to indicate IR (35). The body mass index (BMI) were assessed as follows: (lean: <18.5 kg/m2, normal: 18.5-24.9 kg/m2, overweight: 25-29.9 kg/m2, obese: 30-39.9 kg/m2, morbid obese: >40 kg/m2). The patients were divided into two groups according to the status of fibrosis as group 1 (no fibrosis or mild fibrosis; F0-F1) and group 2 (moderate or advanced fibrosis; F2-F4). The diagnosis of metabolic syndrome was made in the patients who had at least 3 of 5 criteria according to ATP III criteria [9]. The diagnosis of diabetes mellitus (DM) was made according to American Diabetes Association (ADA) criteria or when the subjects were under anti-diabetic treatment [10]. A diagnosis of hypertension was made in the patients who used at least one antihypertensive drug and whose blood pressure value measured in the follow-up was ≥ 140/90mm/Hg according to the ESH/ESC guidelines [11].

The same pathologist (NK), who was blinded to the clinical and biochemical data, reviewed all liver biopsy specimens. As previously reported by Brunt et al. NASH was defined by the presence of hepatic steatosis, cytologic ballooning, scattered, mainly acinar or portal inflammation, with or without Mallory bodies and/or fibrosis [12]. The stage of fibrosis was scored based on a 5point scale (0: no fibrosis; 1: perisinusoidal or portal fibrosis; 2: perisinusoidal and portal/ periportal fibrosis; 3: septal or bridging fibrosis; and 4: cirrhosis). The non-invasive methods for assessment of fibrosis we used in the study are shown in Table 1. The results we obtained in this retrospective study were used by calculation using these methods. The concordance between the scores obtained with these calculations and the biopsy results were assessed and compared with each other.

Pearson or Spearman analyses were used to examine the correlation of the factors with each other. The Student’s t test was used to compare the groups. Receiver operating curve (ROC) analysis was used to determine the diagnostic cut-off values to distinguish between no/mild and moderate/severe fibrosis. The ROC curve analysis results were provided with sensitivity, specificity, area under the curve (AUC), and confidence intervals. Multivariate logistic regression analyses were performed for each non-invasive fibrosis score separately to determine independent factors associated with fibrosis according to biopsy. P value<0.05 was considered statistically significant. All statistical analyses were performed using SPSS® statistical software program (Ver.15.0, Chicago, Illinois, USA).

Twenty two of the patients were male and 18 were female. The mean age was 56.3±9.11 years. No difference was found in the degree of fibrosis in the male and female patient’s groups (p=0.67).

Table 2. Demographic and biochemical characteristics of patients with mild and advanced fibrosis.

Evaluation of the non-invasive methods

The sensitivity, specificity, positive predictive, and negative predictive values of non-invasive methods to indicate advanced fibrosis are listed in Table 4. Using ROC curve analysis the cut-off value for APRI score was found to be 0.61 and 1.08 for FIB4 index. ROC curve analysis revealed that the BAAT and BARD scores were relatively sensitive (88.9% and 88.9%, respectively) but non-specific (12.9% and 35.5%, respectively) to detect advanced fibrosis. The APRI score was highly specific (95.7%) but non-sensitive (35%) while a FIB4 score>1.08 was moderately sensitive (65%) and specific (69.6%) to detect advanced fibrosis.

In this study, we non-invasively evaluated the study subjects in terms of fibrosis scores and compared these results with biopsy results. While some of non-invasive methods were relatively sensitive but non-specific, some others were relatively specific but non-sensitive. Furthermore, no independent correlation was found between advanced fibrosis on biopsy and the non-invasive fibrosis markers used widely in adult patients who were found to have hepatosteatosis on ultrasonography and underwent biopsy. 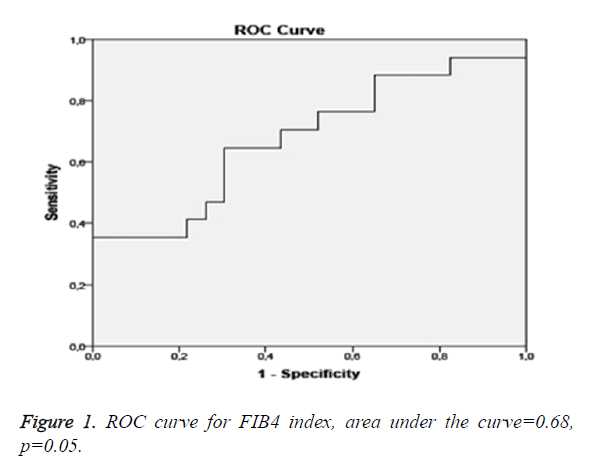 The small number of patients and the retrospective nature are limitations of our study. Thus we cannot reach definite cause-effect relationship with this data. The limited sample size might have led to underestimation of some significant associations. However, the fact that the demographic and biochemical variables of the groups with mild and advanced fibrosis were not statistically different enhances the reliability of our findings.