Evaluation of lead toxicity and antioxidants in battery workers

Oxidative damage has been proposed as one of the possible mechanisms involved in Pb toxicity. To investigate this hypothesis we estimated various blood antioxidants in 25 bat-tery workers. Lead was analysed by Anodic stripping voltametry (ASV), all other parame-ters by spectrophotometric methods. Lead level was significantly high in battery workers (p=0.000). Erythrocyte superoxide dismutase (SOD) activity significantly decreased (p=0.00), whereas reduced glutathione (GSH) significantly increased (p< 0.01) compared to controls. Other enzymes viz., ceruloplasmin (CPL), gamma glutamyl transferase (GGT) and catalase (CT) were in normal range. RBC lipid peroxidation and percentage hemoly-sis remained unaltered. There was a strong negative correlation between blood lead level and SOD activity in the study group. Therefore, the changes in the levels of some antioxi-dants may play an important role in abating hazards of lead poisoning.

Lead is a wide spread constituent of earth’s crust, which has been disposed by man into the environment [1]. Lead (Pb) is not known to serve any necessary biological function within the body and its presence in the body can lead to toxic effects [2]. Lead can cause hypertension, developmental defects, neurological problems, renal dysfunction and anemia [3]. Pb is widely used in industries. Workers in lead refining, soldering, steel welding and battery manufacturing plants experience the highest and most prolonged occupational exposure to Pb, hence are vulnerable to lead toxicity [4]. Total production of Pb acid batteries in India is about 8 million per year and nearly 10,000 Kg of Pb is consumed in the production of batteries. 11.35 Kg of Pb is released to the environment from production of 1000 batteries.

The toxicity associated with Pb is well known. However less information is available concerning the mechanism of toxicity. Pb may induce oxidative stress, that may deteriorate biological macromolecules either by increased production of reactive oxygen species such as superoxide and hydroxyl radicals or by depletion of cells major antioxidants [5]. While Pb poisoning is one of the major environmental hazards in the world, its impact on battery workers is not fully understood.

Hence the present study aims to determine blood Pb concentration and various antioxidants in these workers exposed to Pb.

Random blood samples were collected in EDTA bottles from 25 male battery workers and 25 age matched normal individuals, who were willing to participate in the study. Blood Pb was analysed by Anodic Stripping Voltametry. Reduced glutathione (GSH) level in the blood was estimated by noting the reduction of di thiobis nitrobenzoic acid [6]. Plasma was separated from erythrocytes and cells washed thrice with salinephosphate buffer pH 7.4, then diluted to get 50% suspension with same buffer. The hemoglobin (Hb) content of erythrocytes was determined by cyanmethemoglobin method. Erythrocyte antioxidant enzymes, superoxide dismutase (SOD) and catalase (CT) were estimated in appropriately diluted hemolysates. SOD was determined according to Beauchamp and Fridovich [7] based on inhibition of nitroblue tetrazolium reduction. CT activity was determined by the method of Brannen et al [8], which was based on the disappearance of H2O2 in the presence of enzyme source at 26°C. Plasma ceruloplasmin (CPL) was determined by its p- phenylene diamine oxidase activity [9]. Gama glutamyl transferase (GGT) was estimated by spectrophotometric method [10]. Lipid peroxidation was determined by estimating thiobarbituric acid reactive substance (TBARS), according to the method of Stocks and Dormandy [11]. Percentage hemolysis was studied by the method of Kartha and Krishnamoorthy [12]. 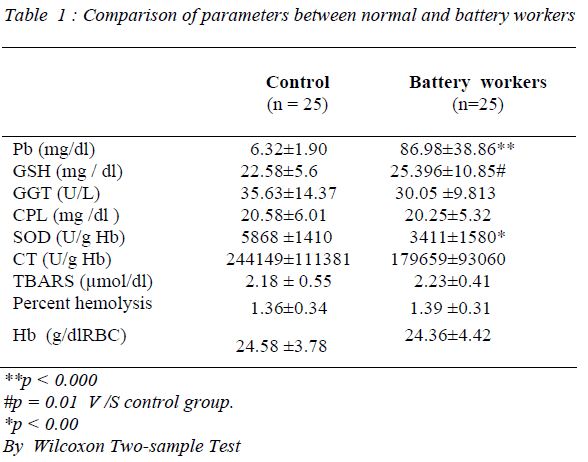 Table 1 : Comparison of parameters between normal and battery workers

Refined Pb is primarily produced from mineral ores and secondarily from recycling materials such as lead acid batteries, Pb sheet pipes etc. In recent days, production of Pb from secondary sources has exceeded the primary source. Hence battery workers experience the highest and most prolonged occupation exposure to Pb. This fact is clearly observed in the present study, where blood Pb levels in these workers are significantly higher (p = 0.000) compared to reference group.

Chronic Pb exposure can induce anemia by both interfering with heme biosynthesis and diminishing RBC survival [13]. RBC membrane lipid peroxidation is known to cause hemolysis. Almost all researchers have discovered that Pb increases RBC lipid peroxidation both in animal and human studies [14,15]. Warowiez et al (16) observed a significant increase in plasma TBARS in lead exposed battery workers. However, the
present study did not show any significant change either in RBC lipid peroxidation, percent hemolysis or hemoglobin level in battery workers compared to controls. Unaltered lipid peroxidation and percent hemolysis probably is the reason for finding normal Hb level in the present study. Further there are conflicting reports on prevalence of anemia among lead exposed workers. Froom et al [17] showed that lead exposure of workers in battery factory is not associated with anemia and Hb determination is not an useful indicator of Pb exposure.

GSH is one of the most important compounds, which helps in the detoxification and excretion of heavy metals. It binds with heavy metals. The resulting water soluble chemical is more easily filtered out of the body [18]. Present study showed a marked increase in the blood GSH level, which is the reason why percent hemolysis remained unchanged in the study group. The expression of γ-glutamyl cysteinyl synthase, the rate limiting enzyme in GSH synthesis, is modulated by oxidants and phenolic antioxidants in various mammalian cells [19]. Hence it is possible that battery workers chronically exposed to Pb may have evolved mechanism for the induction of enzymes of GSH synthesis. However, ever, Sugavara et al [20], have reported a significant decrease in GSH content of erythrocytes from workers exposed to lead.

RBC SOD levels in battery workers decreased significantly compared to normal controls in the present study, whereas plasma GGT and CPL did not show any variations. Literature on the influence of Pb on SOD activity are divergent [21,22]. Our result is compatible with the research of several workers, who noted a decreased SOD activity in erythrocytes under influence of lead [23]. Decreased activity of Cu-Zn SOD, observed may be caused by the interaction between Pb and Cu [24]. A decrease in RBC SOD was explained by direct blocking action of the metal on -SH group of the enzyme [25]. The present study also showed a strong negative correlation between SOD and blood Pb levels. Research on influence of Pb on catalase activity, as with SOD, gave divergent results. Increased activity in lymphocytes and erythrocytes [26,27] was observed in the earlier studies. In our study, CT activity in RBC of battery workers showed a dip compared to the control group. This may be due to the inhibitory action of Pb on CT [28].

Present data indicate that battery workers exhibit an increase in GSH levels most likely as a compensatory response to lead exposure. However oxidative stress induced by lead may partly be attributed to the inhibited activities of SOD and CT. Thus the study provides further evidence to dysregulation of antioxidant/oxidant balance by Pb in battery workers.