Evaluation of Golgi protein 73 as a prognostic marker after loco-regional ablation of HCC in Hepatitis C cirrhotic patients.

Methods: This study was performed on 80 subjects (60 chronic hepatitis C and liver cirhosis, and 20 controls). They were divided into three groups; Group I: included 30 patients with hepatocellular carcinoma, Group II: included 30 patients without hepatocellular carcinoma, and Group III: included 20 healthy individuals as control ones. Golgi protein 73 was measured in all subjects and followed up in group I one, 3, and 6 months after locoregional ablation.

Conclusion: Golgi protein 73 is a useful marker in diagnosis of hepatocellular carcinoma, also in follow up after locoregional therapy to detect early recurrence.

Hepatocellular carcinoma (HCC) is a widespread malignant liver tumor, and it is the third cancer causing death all over the world [1]. The major risk factors for HCC are chronic hepatitis B virus (HBV) hepatitis C virus (HCV), and liver cirrhosis on top of them [2]. The five-year survival rate of HCC patients is low (10.1%) because many cases are diagnosed in advanced stages and high rate of recurrence and metastasis [3,4]. HCC is often detected by ultrasonography and serum alpha-fetoprotein (AFP). Despite AFP has high specificity (80-94%), its sensitivity is only (41-65%) [5]. Other serum biomarkers have emerged to improve the efficiency of early diagnosis of HCC. One of them is Golgi protein 73 (GP73) [6].

GP73 is a type II Golgi membrane protein. Its molecular weight is 73 kDa. In the normal liver tissue, Gp73 is mainly expressed by biliary epithelial cells. However, its expression in chronic liver diseases, either viral or not, liver cirrhosis and HCC is mainly hepatocytes [7,8]. GP73 over-expression is induced in inflammatory process, specifically by inflammatory cytokines such as IL-6, possibly in response to chronic active viral infection [9]. The elevated levels of GP73 expression identified in HCC may be due abnormal core fucosylation to GP73 by α1, 6-fucosyltransferase enzyme (Fut) that increases in HCC. Fut overexpression causes dramatically enhanced expression of GP73 at the level of transcription. However, the precise mechanism of GP73 elevation in HCC is still unclear [10,11]. Recent studies detected the efficacy of biomarker GP73 in the early diagnosis of HCC with high sensitivity and specificity in comparison to AFP [12,13]. However, serum GP73 levels were detected to be higher in patients with liver cirrhosis than those with HCC in other studies making its diagnostic value controversial [14,15]. On the other hand, GP 73 prognostic value was detected in some studies. An association between high levels of GP 73 and tumor aggression, metastasis, poor overall survival was detected, while the exact mechanism was unknown [16,17]. This study aimed to assess serum Golgi protein 73 as a marker for follow up of HCC patients who underwent either radiofrequency or microwave ablation in comparison to AFP levels.

This is a prospective cohort study performed on 80 subjects from the outpatient clinics and inpatients of Tropical Medicine and Infectious Diseases Department in Tanta University Hospitals within one-year period between February 2015 till February 2016. The study protocol was approved by Tanta University Institutional Review Board. Written informed consent was obtained from every participant before the beginning of the study.

HCC was Diagnosed by either two imaging modalities (ultrasound, computed tomography or magnetic resonance imaging) showing lesion with arterial enhancement and venous washout, or histopathology when imagining was not conclusive. The diagnosis of liver cirrhosis was based on liver histology or clinical, laboratory and imaging evidence of hepatic decompensation or portal hypertension.

Informed consent was taken from every patient after explaining the whole procedure. Demographic data were collected. History taking, clinical examination, laboratory investigations (including liver, renal functions, complete blood count, alpha-fetoprotein), and radiological investigations including abdomino-pelvic ultrasound and triphasic abdominal CT with contrast were done. Staging of HCC according to BCLC and severity of liver disease (according to Child-Pugh score) were evaluated. The first group underwent loco regional therapy by either microwave ablation or RFA and followed up over a period of six months by triphasic CT scan, AFP & GP 73.

Determination of serum level of GP 73

Quantitative measurement of human GP73 was based on a sandwich ELISA technique for (ELISA kit provided by Sun Red biotechnology Co. (Planegg, Germany)). Samples were diluted 20-fold in phosphate-buffered saline. Then; 100 μl of diluted serum sample was added to the microtiter plate well pre-coated with an antibody specific to GP73 and incubated at 37˚C for 2 h. Anti-IgG conjugated with biotin was added to each well and incubated for 1 h. The plate was washed three times with buffer. Avidin conjugated to horseradish peroxidase was added to each well and incubated for 30 min. Washing was done five times, 90 μl of tetramethylbenzidine substrate solution was added to each well and incubated in the dark for 15 min. The enzyme-substrate reaction was then terminated by the addition of 50 μl of sulfuric acid solution. Color change was measured spectrophotometrically at a wavelength of 450 nm. Concentration of sGP73 in the samples was determined by comparing the optical density of the samples to the standard curve [18].

Ablation was directed to the entire focal lesion and 1 cm of tumor free margin of normal liver. The procedure was done in a special sterilized unit containing the ultrasound machine (Siemens, Toshiba). First of all, patients were fasting 6 hours. Sterilization of skin was made using betadine and alcohol. Local anesthesia was performed by 10 ml of 2% xylocaine. It was along the needle track from the entry site on the skin to the liver capsule.

RFA was made using The RITA ® Model 1500x RF,” produced by Angio-Dynamics, USA”. As an RFA session began, a hyperechoic focus developed around the uninsulated portion of the electrode. This was attributed to tissue vaporization and cavitations. The area of echogenicity was round; most often progressively increased in size over the course of ablation and generally enveloped the entire tumor with variable extensions in the surrounding liver by the end of the treatment. When the time was over, the generator automatically went into cool down mode for 30 seconds (5minutes on the generator display), when the Cool Down was complete, the temperatures from all leads had to be above 70°C, if not ablation would continue for another 5 minutes at target temperature. In all cases, tract ablation was done before removal of the needle.

As regards MVA the microwave needle (AMICA™ - MW Ablation System) was inserted deep in the lesion avoiding big vessels and surrounding viscera. Ablation was done using 80 Watt for 10 minutes to achieve volume ablation of 25-40% according to safety. When ablation was completed needle track ablation was done to avoid post procedural bleeding. Strong IV analgesics were given to eradicate the pain as pethidine hydrochloride 50 mg or tramadol and intravenous antiemetic was given if needed. All patients were observed clinically for 2-3 hours. Prophylactic antibiotic was given as, amoxicillin-clavulanic acid or ceftazidime, and metronidazole 1 hour before procedure and continued for 5 days.

*Significant. #Chi-square test. Other tests are one way ANOVA.

Table 1. Comparison between demographic and laboratory data of the three groups including alpha-fetoprotein and Golgi protein 73.

Table 2. Comparison between laboratory data of each two groups including alpha-fetoprotein and Golgi protein 73. 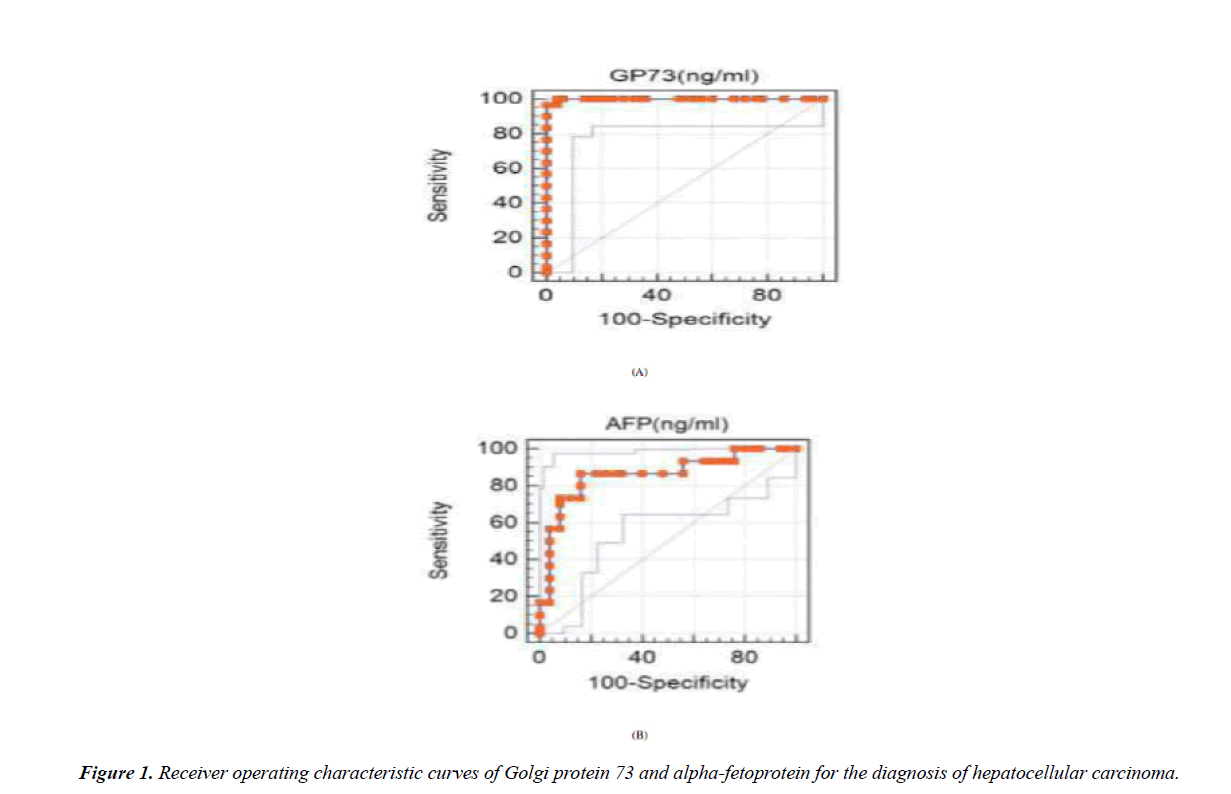 Figure 1. Receiver operating characteristic curves of Golgi protein 73 and alpha-fetoprotein for the diagnosis of hepatocellular carcinoma.

Table 5. Comparison of Golgi protein 73 and Alpha-fetoprotein levels before loco-regional ablation and 1, 3, 6 months after ablation.

Alpha-fetoprotein (AFP) is an important marker for early diagnosis and follow up of liver cancer progression. However, high AFP levels can be detected in liver cirrhosis or exacerbations of chronic hepatitis and about 30-40% of liver cancers are negative for AFP expression [20]. Prospective studies analyzing the value of AFP in HCC surveillance reported sensitivities to be 39-64%, specificities to be 76-91% and positive predictive values to be 9-32% [21,22]. So that, there is a question about the clinical value of AFP, and novel serum markers for liver cancer are being actively sought in current research [23]. Golgi protein 73 is usually expressed in human epithelial cells, not in normal hepatocytes. However, it shows high expression in hepatocytes in liver diseases, especially in HCC patients [24]. The great interest has been directed towards serum GP73 because of its potent role in the diagnosis of HCC. Western blotting, immunoblotting, and ELISA are three major methods used to assay GP73 [25].

In this study, AFP level was significantly higher in group I (HCC group) than group II (HCV induced cirrhosis) and higher in group I than group III (control), while no significant difference was found between group II & III. Lok et al. [26]; reported an increase in AFP levels before detecting any suspicious liver nodule by using ultrasound in 6 of 39 patients with HCC. This indicates that AFP measurement and ultrasound can be complementary.

In a study made by Yousuf et al. [27]; AFP was not detected to be elevated in all HCC patients. In our study, AFP was found normal, less than 20 ng/mL, in 4 cases of group I in the pretreatment period; meanwhile, GP73 was high. This explained the usefulness of GP73 assay in AFP negative HCC. This finding was similar to Zhang et al. [28]; who detected that the commonly used AFP cut-off (20 ng/ mL) had unsatisfactory sensitivity in the detection of early-stage HCC; and up to 50% of patients with AFP level below 20 ng/mL had HCC. Another study stated that 66% of patients with AFP-negative HCC were positive for Golgi protein 73 (GP73) [29].

In agreement with our results, multi-center study in 2008 compared serum GP73 and AFP in 4217 subjects as regards sensitivity and specificity in patients at risk for HCC development. The results were: the sensitivity and specificity of serum GP73 for HCC were 74.6% and 97.4%, compared with 58.2 and 85.3% for AFP (P<0.001) using 35 ng/mL as a cut-off value. The GP73 level was significantly high in patients with HCC in comparison to healthy controls (14.7 vs. 1.2, P <0.001). GP73 decreased after surgical resection of HCC lesions and increased with tumor recurrence [6].

In this study, significant positive correlation was detected between GP 73 in HCC group, and some other parameters (AFP, AST, and ALT). This was similar to another study which revealed significant correlation between serum GP73 level and prognostic markers of liver cirrhosis (AST, ALT, serum albumin, and child score) [34]. However, Hou et al. [11]; stated that there were no correlations between serum GP73 levels and the additional parameters, including tumor size and grading.

As regards follow up, significant decrease in both AFP and GP 73 after locoregional ablation in all stations of follow up (after one month, three months, and six months). These findings mean that GP 73 has prognostic role in patients with HCC. In agreement with the present study, another study showed that AFP, and GP-73 levels all sharply decreased after RFA, which indicated that these tumor markers could reflect the tumor burden and demonstrate the efficacy of RFA [35]. In a similar study measured serum GP73 before and after transarterial chemoembolization of HCC, levels decreased 7 days post-intervention in comparison to those recorded prior to treatment. GP73 serum levels (30 days post-intervention) were significantly higher in patients with disease progression than those of patients in remission [36].

On the other hand, it was detected that a high level of sGP73 was associated with aggressive clinicopathological features of HCC and poor overall survival. Also, a high level of sGP73 in patients with resectable HCC was associated with significantly decreased disease-free survival and overall survival compared with a low level of sGP73. So that, sGP73 may be unsuitable as a diagnostic marker for the early detection of HCC; however, it can be an independent negative prognostic marker [37].

In conclusion, GP73 is an accurate serum marker for the detection of HCC with higher sensitivity and specificity than AFP, and it is a useful prognostic marker also for follow up of HCC after loco-regional therapy. However, increase the sample size and extension of the follow-up time may be needed in future researches.