Estrogen is one of the most important steroid hormones which plays important role in breast growth and development of hormone dependent breast cancer [1]. Estrogen gives the activation or inhibition signals to estrogen responsive gene transcription and gene products expression [2]. There are several mechanisms by which cellular changes occur induced by estrogens.

The most important estrogens action is its binding to the specific receptor. Estrogens diffuse into the cell and binds to estrogen receptor (ER) of nucleus. This complex binds to estrogen response element sequences through protein-protein interactions with activator or specificity protein sites in the promoter region of estrogen responsive genes. It results in recruitment of co regulatory proteins to the promoter thus increase or decrease in mRNA levels hence a physiological response [3].

There are two main subtypes of estrogen receptors (ER), ER α and β. These subtypes possess a considerable homology in the DNA binding and ligand binding domain, but ER β is smaller than ER α and they diverge at transcriptional activation domain, indicating that they may target the distinct set of genes [4]. The distribution of both receptors differs in different tissues.

The ER α (ESR1) gene have molecular size 140 kb with eight exons encoded for protein encompasses of 595 amino acids with a molecular weight of 66 kDa. The promoter region and first intron of the gene usually contains a larger number of regulatory elements than other introns. Several sequence variations or single nucleotide polymorphisms (SNPs) in the ERα gene have been identified and found to be associated with either an increased or a decreased risk of various diseases. The most characterized SNPs of ESR1 are PvuII and XbaI restriction site polymorphisms, located in the first intron [5].

The polymorphisms, PvuII and XbaI are 397 bp and 351 bp upstream of exon 2 and have been described by their reference ID numbers, rs2234693 and rs9340799, respectively [6]. Possible functional mechanisms attributed to these polymorphisms include a change in ERα gene expression by alteration in the transcription factors binding and influence on alternative splicing of ER-α gene [7].

The molecular mechanisms by which the polymorphisms influence receptor activity are yet unclear. PvuII and XbaI RFLPs lie in an intronic which is non-functional area of the gene. This would be expected that other polymorphic areas of ESR1gene near by promoter may be associated with breast cancer risk. The human ER-α gene exhibits low mutational frequency in breast cancer tissue. However, the allelic variants have been found to be associated with breast cancer risk in many populations [8,9].

The present study has been done on two hundred breast cancer female patients from Department of Radiotherapy, Pt. B.D. Sharma University of Health Sciences Rohtak. One hundred healthy female of about matched age group as those of breast cancer patients, with no history of breast cancer were selected for control group. Under complete aseptic conditions, 5 ml of venous blood was collected in sterile EDTA treated tubes (Bekton Dickenson, OK) from breast cancer patients. All samples were taken after institutional ethical committee permissions and personal consent of the patients or guardians (Registration no. PHY13-1009/12.11.13).

The DNA was extracted from peripheral blood by using rapid improvised isolation of mammalian DNA method [10]. The purity was checked spectrophotometrically. Purity of DNA sample was checked by OD at OD260/OD280. The DNA prepared from blood was 20-50 Kb in size and suitable for use as a template in PCRs. The yield of DNA varies 5-15 µg per 300 µl of whole blood.

Genotyping of estrogen receptor-α (ESR1) polymorphisms was done by amplification of genomic regions containing the polymorphisms with set of primers designed by this study (Table 1). PCR was performed by a Simpli Amp thermal cycler (Applied Biosystem, life technologies). The reactions mixture of 25 μL solution contained 1 μM of each primer, 10 ng of genomic DNA, 2.5 mM dNTPs, 25 mM MgCl2 and 1.5 unit of Taq DNA polymerase (Applied Bio system) in 10X Taq buffer without MgCl2 provided by the manufacturer.

Amplification process was done on an initial denaturation temperature 94°C for 3 min, followed by 35 cycles at 94°C for 45 s, annealing (Table 1) for 30 s and 72°C for 2 min, and a final extension at 72°C for 7 min. The final PCR product contains intron 1, exon 1 and 3 of the estrogen receptor-α (ESR1). The PCR product was subjected to restriction endonuclease digestion (Thermo Scientific) using Taq1, PvuII, XbaI, BstUI, and SfaN1 enzymes. 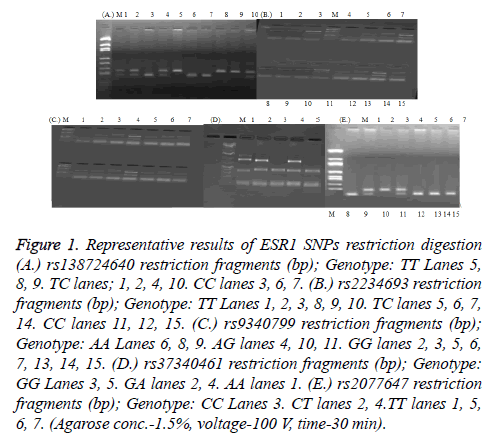 Table 2: Genotype and allele frequency of ESR1 SNPs in patients and control group.

There are many case control studies that have been conducted over the past decade on the different populations including Americans, Chinese, Brazil, Korean, Netherlanders, Indian and Swedish [3,7,9]. There is variability in results of these studies. PvuII and XbaI polymorphism are the most studied variants for their possible role in breast cancer. Many studies found no significant association of PvuII polymorphism (rs2234693) with breast cancer [3,9]. Some studies found statistically significant association between PvuII polymorphism (rs2234693) and breast cancer [7,12].

In case of XbaI polymorphism (rs9340799), significant breast cancer risk association was found in many studies [13,14]. However, some studies found no association with breast cancer. The present study showed statistically significant association for both PvuII polymorphism (rs2234693) and XbaI polymorphism (rs9340799) similar to other studies [9,15]. SNP SfaNI (rs2077647) located on exon 3 showed only borderline significance (p=0.0777). The genotype analysis showed no statistically significant difference among cases and controls for rs138724640 (Taq1) and rs373404617 (BstUI) similar to other studies [16,17]. These polymorphic variants are associated with catalytic activity in conversion of estrogen to 4-hydroxy estrogens and DNA damage [18].

The susceptibility of breast cancer variants may be absent in one population than others. The frequencies may vary among different populations. These variants may not have the same effect among all populations due to different interactions of the variants with other genes or environmental factors [19]. It has been observed that allele frequency of a variant may be different among populations; the variant which are common in one group may not be frequent in the others.

In the present study, the genotype distribution of five ESR1 SNPs (rs138724640, rs2234693, rs9340799, rs373404617 and rs2077647) was examined in breast cancer patients and controls to study the contribution of ESR1 SNPs in occurrence of disease. The genotype analysis showed that SNP rs2234693 and rs9340799 showed significant association with breast cancer. SNP rs2077647 showed only borderline significance. Further keeping in view of the above information validation studies are required on additional ESR1 SNPs to study the breast cancer risk. The prognostic and therapeutic value of research work would be examined and validated further on larger number of samples.

Authors are grateful to acknowledge the M.D. University Rohtak and Pt. B.D. Sharma University of Health Sciences Rohtak for providing the help and support.