This study was conducted to investigate the role of specific phosphodiesterase-3 (PDE-3) in-hibitors like amrinone and milrinone in the generation of seizures in albino Swiss mice. Generation of seizures were carried out in the animals by subjecting them to injection of a chemical convulsant, isoniazid (INH) at the dose of 500mg/kg, s.c and by subjecting them to maximal electroshock (MES) at 60 mA for 0.2 sec. The animals were pre-treated with vari-ous dose levels of amrinone (0.5 mg/kg, 0.6 mg/kg and 0.7 mg/kg, i.p) and milrinone (50μg/kg, 100 μg/kg, 200μg/kg, 300 μg/kg, i.p) 20 mins prior to the INH or MES. The control group of animals received normal saline (5 ml/kg i.p) 20 mins prior to the injection of INH , or before subjecting the animals to MES. PDE-3 inhibitors significantly enhanced the onset of seizures induced by INH and MES. In particular, milrinone potentiated the convulsive phenomenon more significantly (p<0.05 and p< 0.001) when compared with amrinone.

Epilepsy is one of the most common affliction of human beings with a prevalence rate of approximately 1 % of the total population [1]. Seizure is a characteristic feature in epilepsy and is associated with disordered and rhythmic high frequency discharge of impulses by a group of neurons in the brain. The pathophysiological basis for epileptic disorders is both complex and intricate. The search for newer antiepileptic drugs have focussed the research on cell signaling elements like the cytoskeletal structures, transmembrane enzymes and ion channel modulators.

There is recent evidence that the cyclic nucleotide phos-phodiesterases exist in several molecular forms and that these isozymes are unequally distributed in various tissue makes the phosphodiesterases particularly suitable targets for pharmacologic manipulation, for it suggests that by finding selective inhibitors of the different phosphodi-esterase isozymes, one may be able to raise the concentration of cyclic nucleotides in discrete cell types [2]. Through the selective inhibition of the major phosphodi-esterase isozyme of a diseased tissue, it may then be possible to alter the course of diseases characterized by an abnormal metabolism of cyclic nucleotides.

Twelve members of the family have been identified and these can be further divided into a number of subtypes and splice variants. The PDE types differ in their amino-acid sequence, substrate specificities, kinetic properties, allosteric regulators, inhibitor sensitivities and in their organ, tissue and sub cellular distribution [3,4]. PDE-3 is characterized by its high affinity for cAMP and cGMP. cAMP is postulated to be anticonvulsant while cGMP is considered to be proconvulsant [5]. PDE-3 enzyme is highly expressed in the hippocampus, striatum and other discrete sites of the brain and may affect the influx of Ca2+ ions [6,7].

In mammals, PDE are encoded by at least 19 different genes and PDE isoforms are expressed differently in different tissues [8]. Electroshock has been reported to increase the expression of PDE 4 isoform in rat brains suggesting ECS regulates the activity of cAMP system by modifying PDE isoform expression [9,10]. However these studies were limited to PDE 4 family in the cerebral cortex and the hippocampus.
This study was hitherto designed carefully to examine and investigate the role of cyclic phosphodiesterase III in the generation of convulsive seizures. We used pharmacological tools like amrinone and milrinone to block the PDE-3 and evaluate the effect on maximal electroshock and chemical convulsant induced seizures in mice.

Swiss Albino mice of either sex weighing between 22-25 g were utilized for this study. The animals were kept under standard laboratory conditions. A 12:12 dark: light cycle was followed during the experiments. Animals had free access to food and water ad libitum. The Institutional Animal Ethical Committee approved the protocol of this study.

Albino mice were divided into different groups each containing six animals (n=6). Seizures were induced in the animals by using chemical convulsant, Isoniazid (INH). INH is a GABA synthesis inhibitor, which was injected to induce seizures at the dose of 500 mg/kg, s.c as described earlier [11]. 15 mins prior to the injection of INH the animals were pre-treated with varying doses of amrinone (0.5 mg/kg, 0.6 mg/kg and 0.7 mg/kg, i.p) and milrinone (50μg/kg, 100 μg/kg, 200 μg/kg and 300 μg/kg, i.p). On-set of action, myoclonic jerks, clonus, tonic flexion and mortality were noted and tabulated.

Evaluation of onset of seizures

Table 2 and 4 illustrates the action of various dose levels of amrinone and milrinone against MES induced seizures. In which 0.6 mg/kg and 0.7mg/kg of amrinone produced a gradual reduction in tonic limb flexion significantly (p<0.05) when compared with normal saline. Significant (p<0.001) was observed in stupor phase of convulsion at the dose of 0.6 mg/kg and 0.7 mg/kg of amrinone. Like-wise milrinone treated animals showed a significant (p<0.001) reduction in tonic limb tonic extensor and stupor flexion, phases of convulsion in the 200μg/kg and 300 μg/kg dose levels. 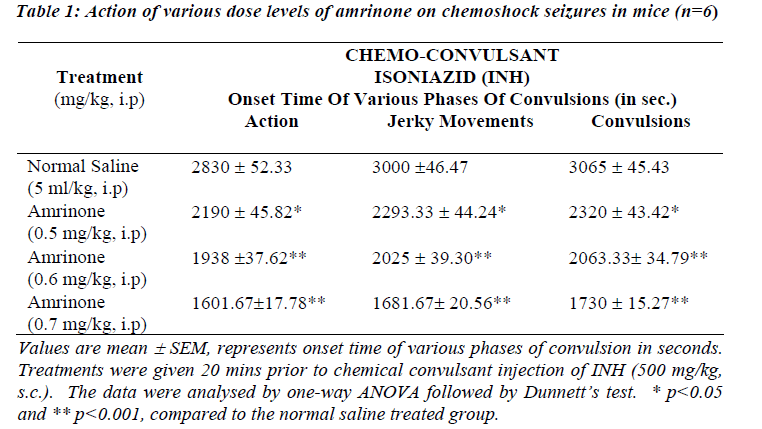 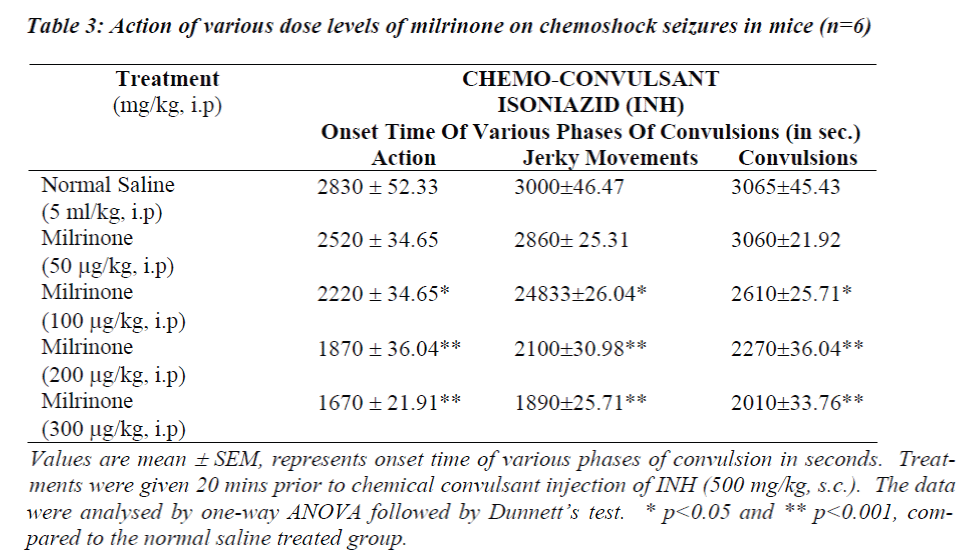 The therapeutic use of theophylline/ aminophylline is associated with the incidence of intractable seizures and mortality [13,14]. The mechanisms involved in these seizures are not well understood and the treatment of the life threatening condition is unsatisfactory. The results of this study suggest that PDE-3 inhibitors potentiate the electro-shock and chemical induced seizures. The bipyridine derivative of selective PDE-3 inhibitors such as amrinone and milrinone is a new class of positive inotropic drugs chemically and pharmacologically distinct from digitalis and catecholamines [15,16]. The mechanism of the positive inotropic effect of PDE inhibitors is similar to that of β-adrenergic agents [17]. Milrinone has been the most studied and used extensively as PDE-3 inhibitor and it is currently used in the acute treatment of heart failure to diminish long term risk [18]. This study demonstrates the importance of the PDE-3 inhibitors such as amrinone and milrinone in the generation of seizure activity with the accumulation of cellular levels of cAMP and cGMP by inhibiting its metabolism. cAMP accumulation is considered to be anticonvulsant and cGMP is considered to be proconvulsant.

The data obtained from this study show that pre-treatment with PDE-3 inhibitors potentiates the onset of action and various phases of convulsions against INH and maximal electroshock induced convulsions as depicted in Table 1 to 4. Our study results also clearly suggest that rate of onset of convulsive time was significantly (p<0.05 and p<0.001) reduced with increasing the dose levels of both amrinone and milirinone against INH and MES induced seizures.

Earlier studies suggest that the elevated levels of cGMP was found in cortical structure in some experimental models of epilepsy [19,20], and the neuronal excitability was regulated by cGMP and Ca2+/calmodulin dependent protein kinase and its phosphorylation process [21]. Apart from these findings, PDE-3 inhibitors possess trans-membrane influx of Ca2+. This influx of Ca2+ is responsible for the phosphorylation process of intracellular proteins, such as ion channels, receptors, enzymes and transcription factors which exhibit significant neuronal excitability and epileptic seizures [22].

On the other hand, phosphorylation of variety of sub-strates regulates the myriad of physiological process, such as immune responses, cardiac and smooth muscle contraction, visual response, glycogenolysis, platelet aggregation, ion channel conductance, apoptosis and growth control [23]. The present study results also early correspond with the generation of seizure activity due to the breakdown of hydrolysis of cGMP which promotes protein kinase phosphorylation process.

Thus, in conclusion the study shows a definite relationship between the specific PDE-3 inhibitors and increase the cellular level of cGMP and Ca2+ ions with the generation of seizures. The release of free radicals have been implicated in many drug and chemical induced toxicities [24]. It is possible that increased production of reactive oxygen species could result in oxidant/ anti-oxidant imbalance and thus, precipitate neurotoxicity. Therefore it appears that non nucleotide mechanism although not well defined could also be contributing significantly to the seizure activity of phosphodiesterase 3 inhibitors.

The authors are thankful to the CMCH Pharmacy, Vellore for the arrangement of Amrinone (Samarth Pharma, India) and Milrinone (Sanofi Synthelabo Ltd, Mumbai, India). The authors also thankful to Thiru. V. Shanmugan, Chairman and Mr. S. Nandakumar Pradeep, Secretary, Nandha College of Paramedical Sciences, Erode 638052, Tamilnadu, India for providing infrastructural facilities to carry out this project and our colleagues who helped directly and indirectly for this study. 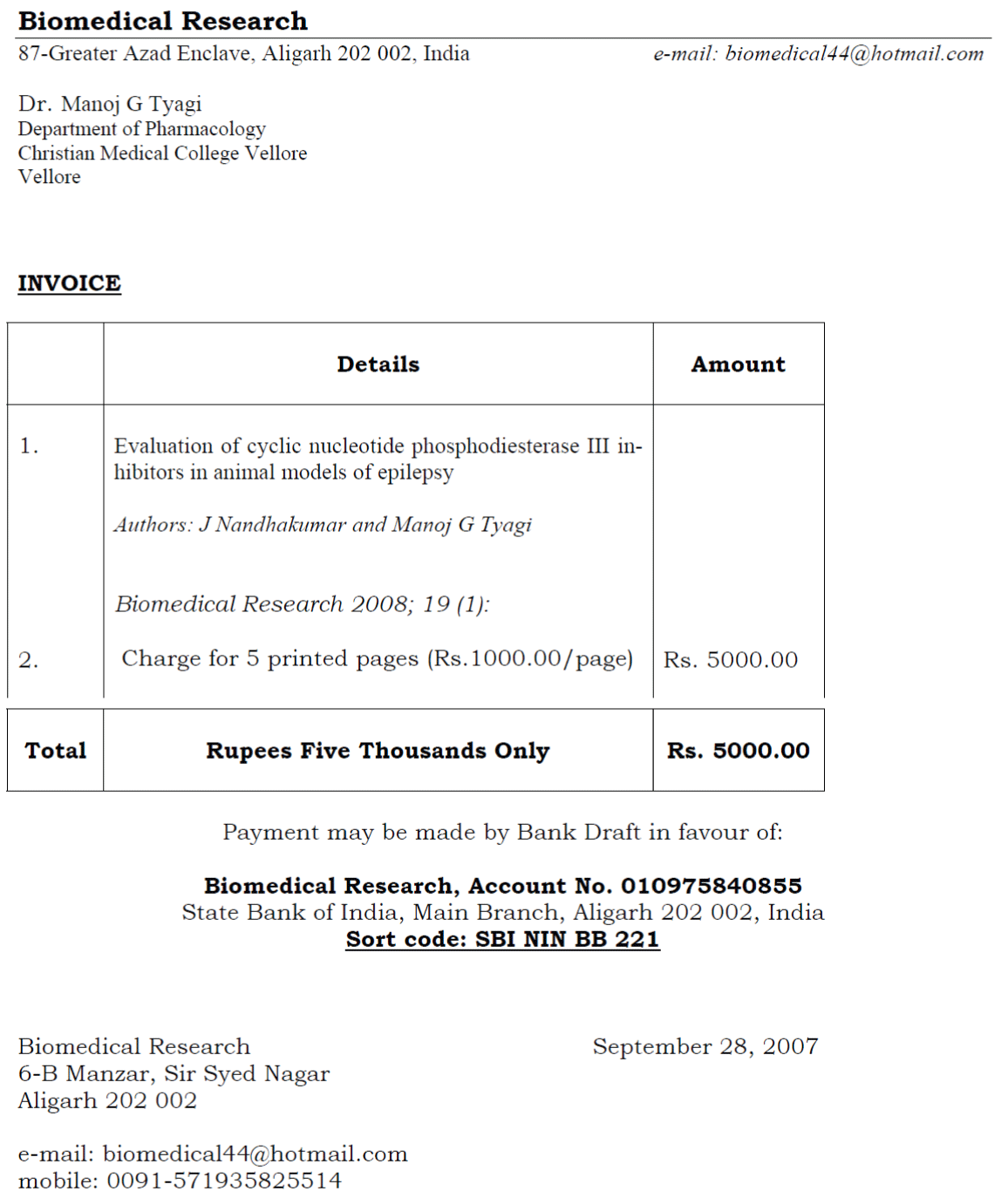