Total brain volume and regional brain size can vary in men and women. Sexual dimorphism between the male and female brain starts in the fetal period under the influence of genetic and hormonal factors. In addition, the newborn brain begins to change in terms of both brain volume and morphology. In the present study, we evaluated gender-related changes in brain volume in children 1–5 years old. Magnetic resonance images of 30 healthy children aged 1–5 years old (15 male, 15 female) were obtained from the Department of Radiology, Meram School of Medicine, University of Necmettin Erbakan. The Cavalieri method and point-counting were used to determine the brain hemisphere volumes from these images. The mean volumes of the right cerebrum in female and male children were 423.26 ± 110.62 cm3 and 456.43 ± 161.39 cm3, respectively, and those of the left cerebrum were 416.41 ± 103.51 cm3 and 460.42 ± 154.99 cm3, respectively. There were no significant differences in cerebrum hemisphere volumes between male and female children 1–5 years old (P > 0.05).

There has been a great deal of interest in brain volume for more than a century. In early studies, brains were placed in a liquid and the brain volume was calculated from the amount of liquid displaced [1]. Newer noninvasive imaging methods, such as computed tomography (CT), magnetic resonance imaging (MRI), radiography, sonography and scintigraphy have since been used to calculate the volumes of organs [2]. The use of CT and MRI has brought about a radical change in the in vivo assessment of morphological structures and substructures of the brain [3]. MRI has better tissue contrast than CT [4], and it is possible to obtain accurate and precise volume measurements using in vivo MRI of the brain and substructures [3].

Stereological approaches while evaluating volume and volume components provide more information about volume relations of the components of structures [5]. One of the stereological approaches is the Cavalieri principle, which provides information on the volumes of organs and substructures. In this method, two-dimensional slices taken parallel to each other are used. The distance between slides is set to equal and random slices are taken at the beginning of sectioning. These features are provided by MRI [6].

Total brain volume, brain weight, and regional brain size can vary in men and women. Sexual dimorphism between male and female brains begins in the fetal period under the influence of genetic and hormonal stimuli [7]. In addition, the newborn brain also changes in terms of brain volume and morphology during further development [8]. The present study evaluated age- and gender-related changes in brain volume in children aged 1–5 years.

MRIs of 30 healthy children aged 1–5 years old (15 male, 15 female) were obtained from the Department of Radiology, Meram School of Medicine, University of Necmettin Erbakan (Figure 1A and 2A). The study protocols were reviewed and approved by the Institutional Ethics Committee (Number 20122–05). 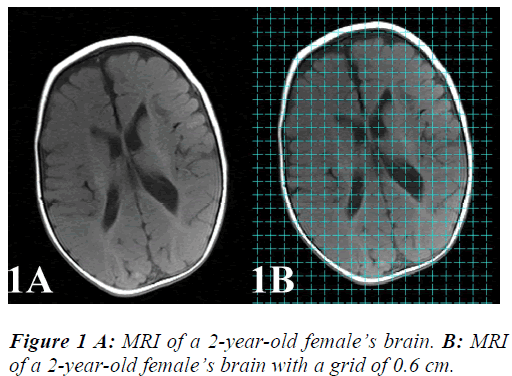 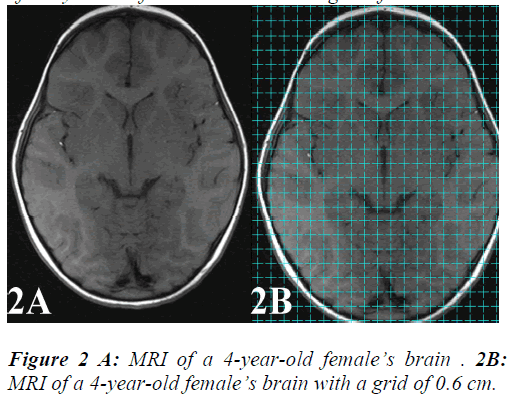 MRI was performed using a 1.5 Tesla system (Magnetom Symphony; Siemens, Erlangen, Germany), which has a high-performance three-axis gradient system. Each brain was scanned in the horizontal plane with a slice thickness of 5 mm at intervals of 5 mm. Brain volume was estimated using the Cavalieri principle and the pointcounting method. The same sections were used for both volume estimation methods.

where t is the section thickness (including interval) of consecutive sections, SU is the scale unit of the printed film, d is the distance between the test points of the grid, SL is the measured length of the scale printed on the film, and P is the total number of points hitting the sectioned cut surface areas of the brain. 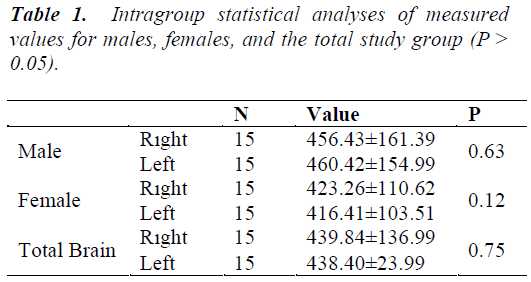 Intergroup analyses of the right and left measurements of males, females and the total study group indicated no significant differences in cerebrum hemisphere volumes (Table 2) (P > 0.05). 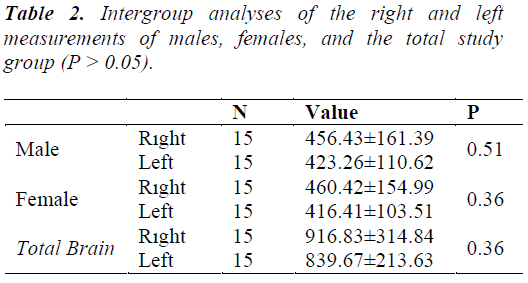 Table 2: Intergroup analyses of the right and left measurements of males, females, and the total study group (P > 0.05).

Human brain size varies greatly between individuals, and a variety of factors play roles in this variation. Gender and body size are factors associated with brain size, and can affect the maximum size of an individual’s brain [9].

An individual’s brain size is thought to be very closely related to body size. Volume measurements of neural structures are greater in males than in females as males generally have a larger body size. In a previous study, brain and cerebellum volumes were higher in males than females but the differences were not statistically significant [5].

The brain volumes of males were 8.7% greater than those of females between the ages of 4 and 18 in one previous study [10]. Similarly, an 8% increase in cerebellum volume was found in males, but there were no significant differences in the volumes of total brain, right hemisphere, or left hemisphere according to age in either sex [10].

The difference in male and female cerebellar size may be due to the influence of sex hormones [2]. Section volumes obtained from the brain, cerebellum, and brainstem provide an index of the volumetric relationships of anatomical brain structures [5]. This measurement index can be used as a standard in further clinical and functional studies [7]. Volume measurements obtained from MRIs are now widely used in research on neurological and psychiatric disorders, such as Alzheimer’s disease, epilepsy, and schizophrenia [4].

The results of the present study did not reveal any significant differences in brain volume between male and female children 1–5 of age. These observations indicate that the cerebrum volume of children in this age group is not significantly affected by gender. This may be because hormones have not reached sufficient levels to trigger differences in body size in children that have yet to reach puberty. This study will be useful as basic information for further clinical and morphometric studies.

All authors participated to the study.