Dimethylbenzanthracene (DMBA) compounds were proven to suppress bone marrow activity, immunosuppressive, and genotoxic and carcinogenic. Black cumin seed extract was used as an immunomodulator, which can be developed as a great therapeutic agent for adjuvant chemotherapy in cancer patients as an immunomodulatory agent. The aim of this study is to determine the effect of black cumin seed hexane extract (BCSHE) as an immunomodulator in SD rat’s peritoneal macrophages induced by DMBA or without DMBA. In vitro experimental study was performed on rat’s peritoneal macrophages cultures induced by DMBA and without DMBA. BCSHE were administered to cultures in five different doses; 1, 5, 25, 125 and 625 μg/ml with control media, tween, and positive control thymoquinone. The test substance was added after the macrophages were activated and then measured by using latex phagocytosis method while ROI secretion assay was measured by using NBT assay method. Results showed that macrophage activation by BCSHE solution increased ROI secretory activity in both SD rat’s macrophage induced by DMBA and without DMBA. BCSHE could increase phagocytic activity in-vitro. It can be concluded that BCSHE can increase ROI secretion and phagocytic activity on SD rat’s peritoneal macrophages induced by DMBA and without DMBA.

Thymoquinone is the primary active substance of black cumin (Nigella sativa) seeds which is used as traditional medicine to repair the immune system, enhance stamina, and as an antiinflammatory. Black cumin seed extract inhibited the cyclooxygenase pathway and a 5-lipooxygenase in arachidonic metabolism on leukocytes of rat’s peritoneal cavity [1]. Furthermore, Akrom et al. proved that black cumin seeds extract administration to Sprague-Dawley (SD) rats before and during dimethylbenzanthracene (DMBA) induction prevented mammary carcinogenesis, increased the number of leukocytes, and the viability of experimental animals [2]. ROI is one of the pleiotropic compounds. Macrophages are activated by pathogens secreted by ROI to kill bacteria. However, the excessive level of ROI become a reactive radical and disrupt the normal cells. DMBA compounds are known as carcinogens, immunosuppressive, and a source of reactive radicals. Other study reported that DMBA induction inhibited inducible nitric oxide synthase (iNOS) expression, NO, and interleukin 12 (IL-12) secretion by macrophages [3]. NFκB and CCAAT/enhancer binding protein (C/EBP) depletion alongside with a decrease in function and activity of rat’s peritoneal macrophages induced by DMBA [3]. DMBA exposure on in vivo and in-vitro proven to reduce the activity of macrophages [4].

Administration of thymoquinone to the in-vitro macrophage cell cultures activated Toll-Like Receptor 4 (TLR-4) through the activation of the sialidase NEU-4 enzyme. Administration of thymoquinone in rats increase levels of IL-1, TNFα, and IL-6, even without induced LPS, it proved that thymoquinone increased phagocytic activity of macrophages and proinflammatory in macrophage cells [5]. Thymoquinone and unsaturated fatty acid compound in black cumin seed extract are assumed to have anti-oxidative and immunostimulatory activity which expected to activate antioxidant enzymes of rat’s macrophages exposed by DMBA and impede the immunosuppressive properties [6]. Although black cumin seed is a potential immunomodulatory agent, including for people with cancer, currently there is no evidence how it influences ROI secretion activity of SD rat’s in vitro DMBA induced macrophages. This study is to determine the effect of black cumin seed hexane extract (BCSHE) on ROI secretion activity of SD rats in vitro DMBA induced macrophages.

Identification, extraction and standardization of black cumin seed with thymoquinone

Black cumin seeds obtained from a certified traditional medicine sellers in Semarang were identified at the Pharmacy and Biology Laboratory, Gajah Mada University. Extraction was done through maceration method. Different level of solvent was applied as maceration strategy. 500 g of black cumin seeds powder was processed maceration with 1 L hexane solvent for 24 hours. Thus, it was stirred for 30 minutes and incubated overnight. The extract then was filtered using Buchner funnel to get the filtrate. This maceration process was done with three replication. Three filtrates then were mixed and evaporated in a rotary evaporator at 50°C up to get gel extract. Gel extract then was evaporated in disk plate using water bath. Thus, the crude extract was collected in the bottle [2]. Standardization of black cumin seed hexane extract (BCSHE) with thymoquinone was done by KLT-densitometry method to get the specific grade of thymoquinone in black cumin seed extract [7]. The assay of unsaturated and saturated fatty acid of BCSHE was done by Gas Chromatography/Mass Spectroscopy (GCMS). Measured parameters on a standardized black cumin seed hexane extract were the percentage of thymoquinone and unsaturated fatty acids. Standardization procedure of N. sativa as the extract is as described by earlier researchers [7].

DMBA induction and macrophage isolation: Oral administration of DMBA (1 × 15 mg) was given to SD rats [7]. After three days, 5 rats from each group was dissected by using narcosis chloroform. Rats were placed in supine position, the abdomen was opened and peritoneum sheath was cleaned by using 70% ethanol, then 10 ml of cold RPMI medium was injected into the peritoneal cavity, waited for 3 minutes and shook it slowly. Peritoneal fluid was removed from the peritoneal cavity by pressing the cavity with two fingers, the fluid was aspirated with a syringe injection, the lean and nonfatty part was selected. The aspirate was centrifuged at 1200 rpm, 4°C, for 10 min. The supernatant was discarded and the bottom sediment was taken, and then the pellet was resuspended in RPMI-1640 (Gibco) (contained 10% FBS, 1 mM sodium Bicarbonate, 2 mM L-Glutamine, 100 μl Penicillin and 0.5 mg streptomycin, 95% ethanol, heparin, sodium oxalate, and distilled water). The number of cells was calculated using a hemocytometer and the cell viability was determined by trypan blue solution, and then added to a complete medium to obtain a cell suspension with a 2.5 × 106 cell/ml. Microculture suspension cells were grown in 24 wells and given round coverslips. Each of the wells was filled by 200 microliters (5 × 105 cells) and incubated in a 5% CO2 incubator, 37°C, for 30 minutes. After that, it was added by 1 ml complete medium and incubated in a 5% CO2 incubator, 37°C for 2 hours. Cells were washed twice with 1 ml RPMI for each well and incubated in complete medium for 24 hours.

Data of ROI secretion was presented descriptively by stating the number, percentage, and average of each descriptive parameter but not followed by statistical analysis because the measurement was only performed twice.

The result of maceration with hexane followed by distillation was clear yellow extract with fairly thin viscosity and distinctive volatile odor while the distillation method resulted in the yellowish brown extract with fairly thin viscosity and a distinctive volatile odor. Results of standardization of black cumin seed ethanol extract are presented in Table 1. Most of black cumin seed extract contents is vaporized extract (essential extract) and un-vaporized extract (fatty extracts).

Table 1. The content of black cumin seed extract set with TLC for thymoquinone and GCMS for unsaturated fatty extract. 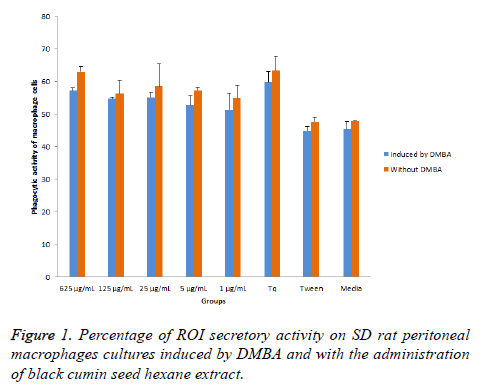 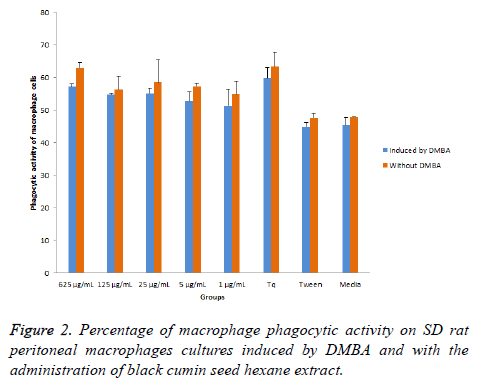 The previous researcher has reported that the largest sitosterol content of BCSHE in Iran and Tunisia is beta-sitosterol (44-54%) and stigmasterol (11-20%) [6].

Nigellone is polymerized form of thymoquinone that can inhibit enzyme cyclooxygenase and lipoxygenase activity on the arachidonic metabolism, thus, might be used as an analgesic, anti-inflammatory and anticancer [15-17].

Macrophages are phagocytes that act as antigen presenting cell (APC) and effectors on natural and adaptive cellular immune response [18]. Research data showed that DMBA induction reduced the number and activity of peritoneal macrophages, phagocytic activity, and ROI secretion. In line with the results of this study, Torroella-Kouri et al. reported that DMBAinduced mice have a lower amount, less active and less reactive peritoneal macrophages [3]. It was associated with low expression of NFκB transcription factor and low level of E2 prostaglandin [3]. Exposure to DMBA has shown to be immunosuppressive and caused toxicity to the bone marrow [19], decreased the number of lymphocytes and inhibited spleen proliferation [20], iNOS and NO production by macrophages, and immunotoxic to macrophages [21].

Aside from thymoquinone, some unsaturated fatty acids such as sitosterol and terpenoids have also shown to increase the activity of macrophage phagocytosis and ROI secretion, which was exposed by xenobiotic. This is done through a cytoprotective mechanism by increasing the secretion of glutathione antioxidant by glutathione S-transferase (GST) due to the activation of the antioxidant responsive element (ARE). Results showed that the hexane extracts of black cumin seeds suppressed the activity of CYP genes and stimulated the activity of GST genes and enzymes.

Previous studies proved that black cumin seed extract served as a stimulant of phase II enzymes, both in vitro and in vivo assays [22,23]. Black cumin seed extract and thymoquinone serve as chemo-preventive through cytoprotective antioxidant effects by suppressing the activity of CYP genes (phase I) and increasing the activity of GST genes (Phase II) through Nrf2 activation, resulting in an increased production of GST enzyme for the detoxification process. Nrf2 gene is a gene that is responsible for oxidative stress, along with ARE [24,25].

Black cumin seed hexane extract (BCSHE) contained thymoquinone and unsaturated fatty acids. Hexane improves ROI secretion activity of SD rat’s peritoneal macrophages either DMBA-induced or without DMBA. Further research to assess the effectiveness of hexane as an in vivo antihepatotoxic immunomodulator along with acute and sub-chronic toxicity test is necessary to be done as a foothold for the development of drugs administration.

The research was funded by Dikti through the 2015 and 2016 competitive research grant.