Aim: The emergence of nosocomial infections, which are mainly transmitted by contaminated instruments, there is an urgent need of a novel disinfecting agent, which can able to act by the novel method with less residual concentration. Evaluation of antibacterial activity of thymol-eugenol mixture for potential application as disinfectant agent.

Methods: The reference strains of Escherichia coli, Staphylococcus aureus and Pseudomonas aeruginosa were used for the determination of bactericidal activity for possible disinfectant activity. Docking study with enoyl ACP reductase (FabI) of E. coli was also performed to elucidate the possible mechanism of bactericidal action.

Results: Thymol-eugenol mixture inhibited the growth of the bacterial organism on increasing the concentration and the activity becomes more enhanced on by further increasing the residence time. Furthermore, both thymol and eugenol were found as efficient ligand engaging the active site of enoyl ACP reductase (FabI) of E. coli with estimated free energy of binding of -5.19 kcal/mol and -4.73 kcal/ mol. The estimated inhibition constant of thymol and eugenol was also found in agreement with the excellent bioactivity, 156.07 uM and 343.24 uM, respectively.

Conclusions: The present study corroborated that, thymol-eugenol mixture efficiently inhibits the growth of bacterial organism which easily survive on the medical instruments and can act as potential disinfecting agent.

In present scenario, infections caused by bacterial organism created a major risk for the survival of the humans [1]. Once the person got infected with any of the infection, he has to be shifted to hospital for better treatment and management of the disease. After admittance to the hospital, the person has become more vulnerable to Hospital Acquired Infection (HAI) apart from the parent infection [2,3]. Consequently, these HAI are deemed as a most common cause of morbidity and mortality of the admitted individuals and altogether increases the associated health care cost [4]. The post-surgical infections due to the bacterial contamination of the site or instruments pose a significant risk to the condition of the patients [5]. It accounts for over 20% of all healthcare-associated infections in surgical patients and responsible for more than one-third of postoperative deaths worldwide [6].

The surgical procedure involves different types of instruments which need to be sterilized before use. Therefore, it is very imperative to disinfect these instruments for the prevention of HAI [7]. The chemicals used as disinfecting agent have been associated with numerous disadvantages, such as, the residual concentrations of the chemicals and no ideal cleaning product exists for processing all types of instruments because each cleaning product has its specific indications for usage and restrictions [8,9]. Thus, the current research focussed on the search of a novel disinfecting agent which is devoid of any of these problems. Moreover, some instruments are susceptible to heat, which need a special agent for effective disinfection e.g. flexible fibre optic endoscopes.

Plant or plant based products are the chief source of the medicinal agent, exhibiting a diverse array of biological properties [10]. Approximately one-third of the top-selling drugs in the world are natural products or derivatives thereof, because of inherited unmatched chemical diversity and practically devoid of any possible side effects [11]. Thymol is well-known for its disinfectant activity because of its potent antibacterial action [12,13]. On the other hand, Eugenol is another plant based product exhibiting potent antibacterial activity [14,15]. Thus, the present study was aimed for the evaluation of antibacterial activity of thymol-eugenol mixture for potential application as disinfectant agent.

The chemicals have been procured from Sigma-Aldrich (USA) of analytical grade.

For analyzing the disinfectant activity, the reference strains of Escherichia coli, Staphylococcus aureus and Pseudomonas aeruginosa were used.

For this assay, the diverse concentration of thymol-eugenol solution was used for the determination of optimal disinfectant concentration. The solutions of thymol-eugenol (1:1) were freshly prepared as 1.0% v/v, 5% v/v, 7.5% v/v and 10% v/v for 5 min, and 10 min. Moreover, the sterile hard water was used as a diluent and as a control. The 2% Sodium thiosulfate was used as a neutralizer to verify whether it was suitable to inactivate every concentration of chemicals. Moreover, the bovine serum albumin (Cohn Fraction V, Sigma) was used to determine the effect of dirty conditions.

In the next instance, the bacterial suspension was added to the prepared solution of disinfecting agent (1:10) at the room temperature and then 1 ml was removed for neutralizing solution after the defined contact times in order to terminate the activity. The inoculation was performed on tryptic soy agar Petri plates by the spread-plate technique in triplicate. The plates were then incubated for 24 hours at 37°C. The expressed bacterial colonies were observed in colony-forming units per milliliter (c.f.u./mm). Thus, the plates that have colony count between 30 and 300 were considered significant for the assay. The Reduction Factor (RF) was calculated as the expression of the disinfectant efficacy, on the basis of following relationship

The reduction in Log10 with 5 or more suggests satisfactory microbicidal activity. In the case of dirty condition, each of the concentration of the solution was also tested with albumin. For this, bovine serum albumin was added to the disinfectant solution before adding bacterial inoculum.

Docking simulations were performed using the Lamarckian Genetic Algorithm (LGA) and the Solis & Wets local search method (Solis and Wets, 1981). Initial position, orientation, and torsions of the ligand molecules were set randomly. All rotatable torsions were released during docking. Each docking experiment was derived from 10 different runs that were set to terminate after a maximum of 250000 energy evaluations. The population size was set to 150. During the search, a translational step of 0.2 Å, and quaternion and torsion steps of 5 were applied.

The disinfection of the various concentrations of thymoleugenol was assayed for the potential to attenuate the growth of the bacterial organism responsible for HAI. The results of the investigation have been tabulated in Table 1 in terms of logarithmic reduction values corresponding to contact times of tested disinfectants. Numerous studies showed that, contaminated endoscopes are the major source of nosocomial infections. Whereas, after thorough disinfection of used endoscopes, there is a greater possibility that, it remains became contaminated and facilitates the transmission of the multidrug-resistant organisms across the individuals. Thus, the processing of reusable medical instruments with suitable disinfect is a major concern for medical institutions worldwide.

In this regard, endoscopes are more vulnerable and need a specialized disinfectant which can able to clean the last remains of the bacteria in short effective time. Glutaraldehyde is a most preferred chemical for the efficient disinfection of the heat-labile endoscopes. As it’s a chemical agent, it possesses certain disadvantage in handling, like, irritation to eyes, nose and throat. Therefore, it is much imperative to develop a green agent that is devoid of any of these characteristics and efficient in cleaning. In the present study, we have used a solution of thymol-eugenol (TE), which belongs to the natural origin and does not have any handling caution. As shown in Table 1, in the case of E. coli, the 1 % concentration of TE showed the same level of reduction at 5 and 10 min duration. While, on increasing the concentration to five-fold (5%), the level of attenuation has been become more than doubled, with slight improvement in the case of 10 min. More pronounced activity has been recorded on further increasing the concentration to 7.5% and 10% with caused logarithmic reduction factor above 5, i.e., 6.45 and 9.21 at 5 min, respectively.

The activity becomes more enhanced on further increasing the residence time. The past two decades have witnessed the increase in incidence of S. aureus infection with simultaneous rise in antibiotic-resistant strains also-in particular, methicillinresistant S aureus (MRSA) and, more recently, vancomycinresistant strains. Thus, it becomes more crucial to determine the effect of TE against S. aureus. The results as presented in Table 1 showed that, TE at a concentration above 5%, showed a logarithmic reduction of bacterial viability above 5. The results also confirmed that, the reduction efficiency is found unaltered on increasing the concentration. The TE solution was found to exhibit moderate activity against P. aeruginosa. It has been found that at all tested concentration except 10%, TE does not show any prominent activity. While at the highest concentration, it showed improved activity, i.e., a logarithmic reduction of 5.56 and 5.63 at 5 min and 10 min, respectively.

The present study enumerate that, TE mixture showed excellent bactericidal activity against E. coli. Thus, to determine the mechanism of action of these compounds as a disinfectant, we have performed docking with enoyl ACP reductase (FabI) of E. coli. The 3-D protein crystal structure was obtained from Protein Data Bank (http:// www.rcsb.pdb.org; PDB entry: 1C14). This enzyme was responsible for reduction of enoyl-acyl-carrier-protein (ACP) substrates, a critical step necessary for fatty acid elongation of E. coli. Thus, inhibition of Fabl serves as important step in controlling the pathogenesis of E. coli. The thymol and eugenol were docked individually to determine their binding affinity and their docked orientations has been depicted in Figure 1. The Figure 1 elucidates that, both thymol and eugenol bind to the active site in an efficient manner via formation of efficient hydrogen bonds and pi-pi stacking interactions. Particularly, thymol was identified to create more interactions, for example, it has been shown to create hydrophobic interaction with Ile20, Thr146, Ala189 and pi-pi and cation-pi with Tyr146 and Tyr156. Moreover, the eugenol interacts with Val65 and Ile92 via hydrophobic interaction. It also showed to interact with Thr38, Gln40 and Leu44. In terms of scoring parameters, as shown in Table 2, both thymol and eugenol found as efficient ligand to engage the active site of protein with estimated free energy of binding of -5.19 kcal/mol and -4.73 kcal/mol, respectively. The estimated inhibition constant of thymol and eugenol was also found in agreement with the excellent bioactivity, 156.07 uM and 343.24 uM, respectively. 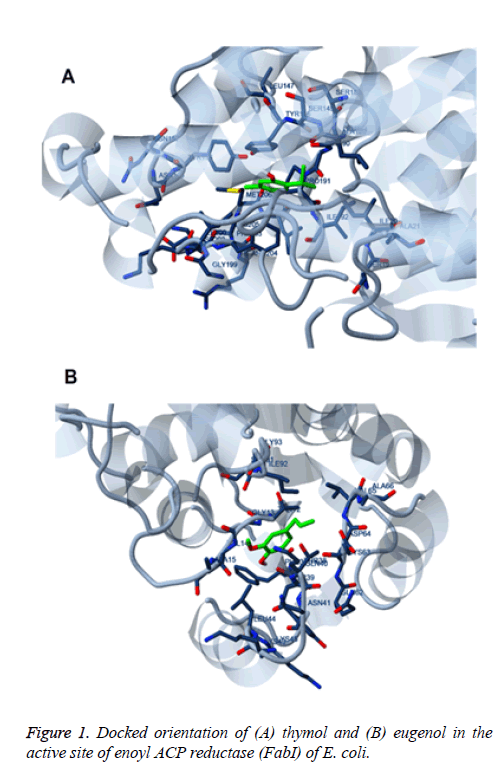 Figure 1. Docked orientation of (A) thymol and (B) eugenol in the active site of enoyl ACP reductase (FabI) of E. coli.

The present study corroborated that, thymol-eugenol mixture efficiently inhibit the growth of bacterial organism which easily survive on the medical instruments. The effectiveness of the disinfectant activity was easily achieved in optimum contact period. Thus, thymol-eugenol could be used as a potential disinfecting agent. However, more studies are needed to explicate the detailed mechanism of action.