Activated charcoal lacks efficacy in preventing the absorption of iron. We hypothesized that bentonite, which is an inert natural adsorbent, may decrease the iron absorption and ameliorate the toxic manifestations in rats after iron poisoning. For the pharmacokinetic experiments, rats were randomized into three groups which received iron (as ferrous sulfate)+distilled water (Control), iron+bentonite (B5 (five-fold higher than the iron dose)), iron+bentonite (B10 (ten-fold higher than the iron dose)) via gavage. The blood samples were taken for six hours. The area under the plasma concentration-time curve (AUC) (0-360) (min μg/dl), peak concentration of iron in serum (Cmax) and time to reach Cmax (tmax) were calculated from the individual serum concentration-time profiles. For the survival part, rats were randomized into three groups and received (LD50), iron+distilled water (Control (s)), iron +bentonite (Bs5 (fivefold bentonite)) and iron+bentonite (Bs10) via gavage. Rats were observed for 72 hours. Iron levels showed a wide variation, and no significant differences in AUC (0-360), Cmax and tmax were detected. However, the mortality rate was significantly lower (9.1%) in the Bs10 group, as compared to Control (s) (55.6%) groups. Bentonite was found to be effective in preventing mortality in the rat model of acute iron toxicity.

Unintentional poisoning with iron or iron containing products is still an important issue particularly in young children [1,2]. Decontamination options are limited with gastric lavage and whole bowel irrigation since activated charcoal is demonstrated to be ineffective in previous studies [3]. Parenteral deferoxamine, which is the preferred antidote in severe cases, is not free of drawbacks such as high cost, lack of availability in hospitals and adverse effects with prolonged use [3,4]. Therefore, the search for an effective and orally active adsorbent for iron is important.

Bentonite, the clay from volcanic origin that contains montmorillonite, is a physiologically inert substance [5,6]. It is ubiquitous in many places among the world and has been used in the production of cement, adhesives, ceramics and even rocket engine nozzles. Bentonite has a surface area of 250-800 m2/g which provides a high adsorptive capacity for cations [6-8]. It has also been used as an oil purifier and -is effective in adsorbing protein molecules from aqueous solutions [8]. Similar to activated charcoal, it has been suggested as a gastric decontaminant in paraquat poisonings [9] and was shown to be effective in adsorbing lithium in vitro [10].

This two-step study was aimed to investigate whether bentonite might be effective in preventing the absorption of iron and improve survival rates in the rat model of acute iron toxicity.

Our study was performed in accordance with the guidelines provided by the Local Ethics Committee of Animal Experiments of the Adnan Menderes University School of Medicine in Aydin, Turkey (Approval number: B. 30.2. ADU. 0.00.00.00/050.04/2010/004). Female Wistar rats, 240.9±18 g, 8-weeks old, were obtained from the Experimental Animal Production and Experimental Research Laboratory of the Adnan Menderes University. The rats were housed in a temperature-controlled room (22ºC) with 12 h light-dark cycles and received a standard diet and water ad libitum. All rats were fasted for 12 hours before the experiments.

On experiment day, rats were randomized into three groups. After reversible intraperitoneal anaesthesia with ketamine (50 mg.kg-1) and xylazine (5 mg.kg-1), the right jugular vein was cannulated with polyethylene tubing (PE-50 Cannula Tubing, Commat Ltd., Ankara-Turkey). The cannula was then fixed onto the back of the neck of the animal for blood sampling.

Iron, as ferrous sulphate (760 mg.kg-1, equivalent to 153 mg.kg-1 elemental iron, 750 μl) was administered via oral gavage. Five minutes later, the Control group received distilled water (1250 μl), and the bentonite groups received bentonite in doses which are 5 or 10 fold of the elemental iron dose (B5, 765 mg.kg-1 or B10, 1530 mg.kg-1, 1250 μl), respectively. The elemental iron doses for the pharmacokinetic and survival experiments were based on a previous study by Berkovitch et al. [11].

The platform on which the rat was attached to was set at a 45 degree angle with horizontal axis to avoid aspiration during gavage. Blood samples (250 μl) were withdrawn through the inserted cannula before (0) and at the 30th, 60th, 90th, 120th, 180th and 360th minutes of ferrous sulphate administration. Equal amounts of saline (250 μl) were administered after each sampling to replace blood volume. Serum samples were separated by immediate centrifugation at 4000 rpm for 10 min. Aliquots of serum were stored at -20°C until analysis.

This part of the study was planned to evaluate whether bentonite might improve the survival rates in a rat model of iron toxicity. On experiment day, rats were again randomized into three groups and all rats received ferrous sulphate (1013 mg.kg-1, equivalent to 204 mg.kg-1 elemental iron, 750 μl). Five minutes later, the control group received distilled water (Control (s), 1250 μl) and the bentonite groups received bentonite in doses which were 5 (Bs5) or 10 (Bs10) fold of the elemental iron dose (1020 mg.kg-1 or 2040 mg.kg-1, 1250 μl), respectively. Because iron toxicity has also a late phase which may be delayed for up to 2-4 days, the rats were observed for 72 hours [5].

Statistical analysis: The statistical calculations were performed using Graph Pad Prism 4 software (CA, 92037, USA). Pharmacokinetic data were reported as mean ± SD. One-way Analysis of Variance (ANOVA) for repeated measures and unpaired Mann-Whitney U test was used to assess the serum iron concentrations at predetermined time points within and between the Control, B5 and B10 groups, respectively.

The mortality rates of the Control (s), Bs5 and Bs10 groups were assessed by Fisher’s exact test. p<0.05 was considered to be significant. 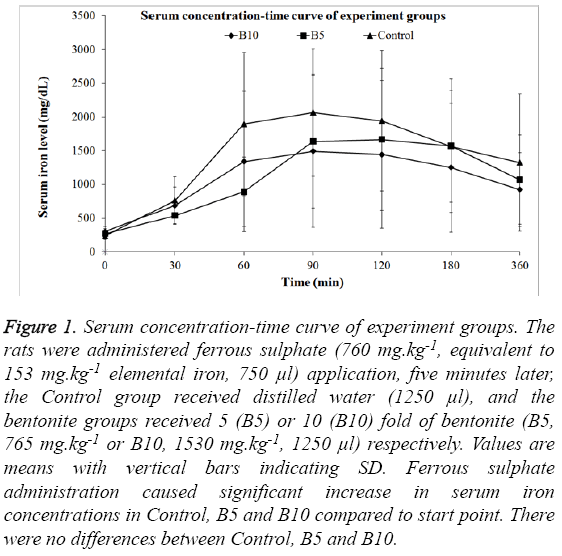 Figure 1: Serum concentration-time curve of experiment groups. The rats were administered ferrous sulphate (760 mg.kg-1, equivalent to 153 mg.kg-1 elemental iron, 750 μl) application, five minutes later, the Control group received distilled water (1250 μl), and the bentonite groups received 5 (B5) or 10 (B10) fold of bentonite (B5, 765 mg.kg-1 or B10, 1530 mg.kg-1, 1250 μl) respectively. Values are means with vertical bars indicating SD. Ferrous sulphate administration caused significant increase in serum iron concentrations in Control, B5 and B10 compared to start point. There were no differences between Control, B5 and B10. 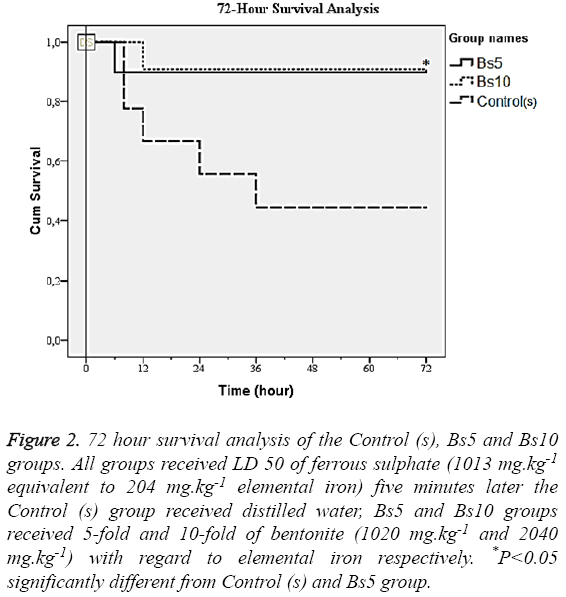 The intensity of toxic effects of iron was shown to differ between the sexes [14]. In our study, female rats were chosen to observe iron toxicity more dramatically, since oral administration of iron were shown to significantly lead to shorter survival times and higher iron levels and peaks in female rats than it is in the male rats.

Activated charcoal prevents the absorption of most ingested substances; however, its binding efficacy for ionic salts like lithium, iron and cyanide and small polar molecules like alcohol is low [15]. In vivo and clinical studies also demonstrated its ineffectiveness in adsorbing iron [16-18]. Ghafari et al. showed that oral deferoxamine administration significantly decreases the mean serum iron levels compared to charcoal and vitamin C administration [18].

Ponampalam et al, have suggested that bentonite might effectively adsorb lithium and has tested this hypothesis in vitro. The study demonstrated that bentonite, when applied in ratios of 5:1, 10:1 and 30:1decreased the recovery of lithium from deionized water by 2.5%, 12.89% and 20.55% respectively. Larger reduction has been detected in simulated gastric fluid, in which bentonite caused a 24.98%, 41.66% and 48.09% decrease in recovered lithium when applied in ratios of 5:1, 10:1 and 30:1 respectively [10]. In paraquat poisoning, the use of bentonite as an adsorbent was also suggested [9]. These data, although limited, suggest bentonite might be an alternative adsorbent for the compounds which were not effectively adsorbed by activated charcoal.

In our study, bentonite caused a significantly decreased the mortality rate at the 72nd hour in Bs10 (9.1%) compared to Bs5 (10%) and Control (s) (55.6 %) groups. One explanation for this effect might be the possible protective action of bentonite on the Gastrointestinal System (GIS) mucosa since less haemorrhage was observed in the autopsies of bentonite groups in both the pharmacokinetic and survival experiments. However, this was not a systematically conducted observation and remains to be further studied.

In conclusion, bentonite administration significantly decreased the mortality rates in rat model of iron toxicity. This effect may be attributed a possible protective effect of bentonite on GIS mucosa rather than decreasing systemic bioavailability of iron since no significant differences were detected in iron disposition between groups. Further studies in this field, should aim at investigating other compounds for which activated charcoal lacks efficacy as an adsorbent (e.g. lithium), since high variations in iron levels may complicate pharmacokinetic calculations and have the potential to mask significances.

Lack of liver and/or histopathology assessment was one of the most important limitations of our study; however, severe intestinal haemorrhage was observed in autopsies of the Control (s) group and in rats with lower survival rates. Additionally, biochemical parameters or molecular parameters of iron toxicity were not investigated since the primary focus was the evaluation of iron pharmacokinetics and survival rates.

The authors are grateful to Amcol Minerals Europe Ltd./Amcol Mineral Madencilik A.S. Istanbul-Turkey for supplying us bentonite as a gift. The authors would also like to thank Sevinc Tombul for the professional care of animals during housing and experiments.

The authors declare that they have no conflicts of interest in the research.