Ethnicity differences in the hospital costs, disease constitution and hospital characteristics for patients in Northwest China

This study aimed to analyze ethnicity differences in the hospitalization services utilization in the New Cooperative Medical Scheme (NCMS). The data was taken from the NCMS office of Touying town, Guyuan County, Ningxia Hui Autonomous Region. Among 2,362 patients admitted to the hospitals, 1,037 (43.9%) were of Hui ethnicity and 1,325 (56.1%) were of Han ethnicity. Approximately one-half were female in both groups. The mean age was 36 y for the Hui versus 44 y in the Han group. Non- Provincial Hospitals (NPH) admitted the largest proportion of patients in both groups, at 93 and 91%, respectively, for the Hui and Han. Overall mean cost of hospitalization was 4,624 RMB per patient, Out- Of-Pocket payment (OOP) was 2,615 RMB, 46% cost was reimbursed. In Provincial Hospitals (PH), the median hospital costs were 6,141 RMB for Hui and 9,750 RMB for Han. The median reimbursement rate in PH and NPH was 35% and 52%, respectively. In the 5-14 y age groups, Hui had a much larger proportion of injury causes than Han group. Our findings demonstrate ethnicity differences in the hospitalization services utilization in the NCMS and provide the guide for the development of preventive health care service in the minority areas.

The New Cooperative Medical Scheme (NCMS) was implemented in 2003, which is a main component of China’s new rural medical insurance system. NCMS largely concentrates on catastrophic illness and reimburses mostly for inpatient expenses. By the end of 2009, 95.3% of all counties and 91.5% (815 million) of the rural population would be covered by NCMS [1]. These policies were designed to further resolve illness-led poverty and the poor health care in the local area.

Several studies had reported that patients who had participated in NCMS were more likely to look for health care service [2]. NCMS improved the utilization of hospitalization services for rural residents [3]. In China, more than 60% of populations reside in rural communities, and rural hospitals constitute 16% to 34% of all hospital discharges. Hospitalization plays a vital role in the health of rural residents.

Previous studies have shown that the variations in the cost of hospitalization and reimbursement were largely attributed to the length of hospital stay, insurance coverage/payer, racial/ ethnic and socioeconomic position, designated hospitals, hospital characteristics and physicians [4-13]. Ethnic minority regions in China have specific socioeconomic conditions and policy environments worthy of exploration to assist in the development of rural health insurance schemes [14]. However, there are few studies reporting on the effects of ethnicity on the cost of hospitalization and reimbursement. In this study we aimed to analyze ethnicity differences in the hospitalization services utilization in the New Cooperative Medical Scheme (NCMS). We enrolled the inpatients of Touying Town, Guyuan County, Ningxia Hui Autonomous Region in 2011.

In this study the data was taken from the NCMS office of Touying town, Guyuan County, located in the Southern mountainous area of Ningxia Hui Autonomous Region (NHAR). During 2011, total 2,362 patients were admitted to the hospitals and their medical cost was covered by NCMS, and all of them were selected and their data were analyzed. NHAR had a GDP per capita of 11,784 RMB (about 1,571.2 US$) in 2012. 48.8% of the area’s population is Hui ethnic minority group, a Muslim minority adhering to Islamic principles, culture, diet and lifestyle. Guyuan has the greatest concentration of Hui ethnic minority in any county in China. Touying town is located in a less developed region, windy and sandy with frequent droughts, and has a mixture of both Hui and Han groups.

Disease constitute: We used the patient’s diagnosis from primary, the causes of admission were classified according to the 10th revision of the International Statistical Classification of Diseases and Related Health Problems (ICD-10), a medical classification list by the World Health Organization (WHO).

All statistical analyses were performed using IBM SPSS 22.0 software. Categorical variables were reported as frequency and percentage (%) and examined using chi-squared tests. Hospital costs were reported as mean (SD), median, interquartile range, 25% and 75%, minimum and maximum, and examined using Mann-Whitney tests due to the highly skewed distribution. Regression analysis was performed to test multivariate associations among the variables. P values were two-tailed and P<0.05 was considered statistically significant.

Demographics of the sample

Distribution of diseases by frequency and costs of hospitalization

Ethnic group as a moderator of the relationship between age, hospital characteristic, and gender with hospital costs 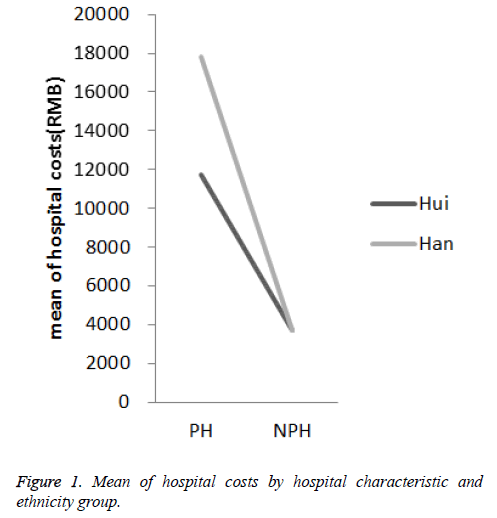 The difference of disease spectrum and hospital costs in PH

Hui and Han patients showed no difference in the choice of medical institutions, but the hospital costs were different. Han patients spent more money in high-grade medical institutions, and the amount spent was more dispersed. A large number of studies have shown that the cost is related to the type of disease, the severity of the disease, length of hospital stay, economic condition, and the religious culture. The reason for the difference need further study.

However, the real reimbursement rate of hospitalized patients was much lower than the nominal, especially in NPH with the range of 60-90%. OOP was 2,615 RMB, about more than half the average annual wage in Guyuan County. The proportion of compensation is affected by the patient’s medical institutions and the complexity of reimbursement procedures. Furthermore, high OOP NCMS hospitalized patients may be banned from receiving necessary medical care, especially for those living in poor rural areas [15].

In this study, Hui children inpatients accidental injuries are the first largest contributor to ethnicity disparities in incidence rate. Hui cases were nearly four times as many as those of Han and more than half of the hospitalizations were attributed to fractures. Home injuries and falls are responsible for the majority of the injuries. Parents play an important role in the prevention of child prevalence of unintentional injuries. Many studies have demonstrated that family with lower socioeconomic status was associated with children intentional injury risk [16]. Generally, Hui get married at a younger age. Younger parents are usually less experienced to care their children. On the other hand, due to Family Planning Policy and special fertility culture, Hui has more children than Han. As a result, Hui did not have enough time to take care of their children. Hui parents should pay special attention to 5 to 14 y kids. Teachers should assist parents to help children, thereby reducing the rate of injuries.

Children are susceptible to respiratory disease. Of particular concern are the in inpatient rates among 5-14 y old. Within this group, Han had over three times the rate of their Hui peers. The reason may be low smoking rate in Hui. Passive smoke is particularly dangerous for children. Children exposed to second-hand smoke are at higher risk of respiratory diseases. Therefore, it is particularly important to strengthen the education of tobacco control and enhance their guardian’s health protection awareness.

In conclusion, our study showed the differences in the hospitalization services utilization in Hui and Han. These findings provide the guide for the development of preventive health care service in the minority areas in Northwest China.