Estimation of iodine levels in drinking water in Puducherry district

The requirement of iodine is met from food and water when the soil content of iodine is adequate. It is a common belief that population living near the sea coast is spared from iodine deficiency disorders. A cross sectional descriptive study was conducted among the school going children between classes 5 to 8 to evaluate the iodine content of drinking water being consumed by the population in the district of Puducherry. A total of 86 samples were analysed by catalytic reduction method of which 12 samples were from hand pumps and 74 samples from the municipality. The mean iodine level in the water sample was found to be 9.27 ± 3.4 μg per dl. Some communes however had lower iodine levels in drinking water. The water iodine levels contribute significantly to the daily intake of iodine.

The requirement of iodine is met from food and water when the soil content of iodine is adequate. It is a common belief that population living near the sea coast is spared from iodine deficiency disorders. A cross sectional descriptive study was conducted among the school going children between classes 5 to 8 to evaluate the iodine content of drinking water being consumed by the population in the district of Puducherry. A total of 86 samples were analysed by catalytic reduction method of which 12 samples were from hand pumps and 74 samples from the municipality. The mean iodine level in the water sample was found to be 9.27 ± 3.4 μg per dl. Some communes however had lower iodine levels in drinking water. The water iodine levels contribute significantly to the daily intake of iodine.

The regions far from the ocean have the greatest risk of iodine deficiency. Some of the most severe iodine deficiency occurs in relatively young mountainous areas of Alps, Andes, and Himalayas, where iodine in the soil has been washed away by rain and glaciers. Living on the sea coast also does not guarantee iodine sufficiency; as significant pockets of iodine deficiency have been reported from Goa, Mumbai, Kerala, and Andaman and Nicobar islands [1]. Iodine is concentrated as iodide in the top soil of the earth and absorbed by food crops. Deficiency of iodine has several important health consequences that are together called Iodine Deficiency Disorders (IDD) like goiter, hypothyroidism, cretinism and socioeconomic retardation [2].

When the daily requirement of iodine is not met from the natural sources as food and water, supplementation becomes necessary. About 90% of daily needs of humans are met from food and 10% from water [3]. The iodine content of fresh water though small is considerable and can range from 1-50 μg per liter [3]. In a study conducted by the National Institute of Nutrition, the iodine content of drinking water in goitrous areas was found to be 3-16 μg per liter as compared to 5-64 μg per liter in non-goitrous areas [3].

About 200 million people are at risk of IDD in India. Iodine is an essential micronutrient of which 150 microgram is required daily for normal human growth and development.

Surveys conducted by the Central and State Health Directorates revealed that not even a single State/Union Territory of India is free from the problem of IDD [1]. In 1995, out of 239 districts surveyed by the Government of India survey teams in 25 states and 4 union territories, 197 had been found to have IDD [4]. The solution to IDD is simple and cost effective as iodine can easily be added to table salt.

The present study was conducted to find out the iodine levels in drinking water in different parts of Puducherry district.

A survey was conducted in the district of Puducherry in the months of Aug. – Nov. 2005 to assess the level of iodine in water. A cross-sectional descriptive study was conducted among the school going children, between classes 5-8. They were selected based on the criteria suggested by WHO /UNICEF / ICCIDD [5].

A school based survey of the community is superior to the household survey because the latter does not represent the children not attending schools. But in the UT of Pondicherry, enrolment of children into the schools is almost 100%. Also, due to their being highly vulnerable and accessible besides being representative from all sections of the society, the surveys were conducted in Government Public schools in Puducherry.

As recommended by IDD prevalence survey, the probability proportionate to size (PPS) cluster sampling methodology was followed. For identifying the clusters, the assembly constituency-wise population for Puducherry region was taken into account. Thirteen clusters from eight communes were selected for the study. Then, the schools in the identified areas were listed out with reference from the Statistical Handbook 2001-2002, Directorate of Economics and Statistics, Pondicherry. One school from each cluster was randomly selected and students belonging to classes 5–8 were again selected randomly. In the study 110 children participated. They were all given a question naire to take home and to be filled in by their parents, reggarding the source of drinking water supply. The students were also requested to bring drinking water samples from their homes. The next day, these water samples were collected, properly numbered and stored till analysis of iodine content was done. Finally, 86 water samples were included in the study, the rest being excluded due to inadequate amount.

The properly labeled water samples were processed in the department of Biochemistry, MGMC and RI. Catalytic reduction method was used to estimate the level of iodine in the water samples. The estimated values were recorded in μg/dl. This method followed a strict internal quality control with known concentrations of iodine.

The total number of samples of water collected was 110, of these 86 were selected for the study. The rest were excluded due to insufficient quantity. Of these 86.05% of the samples were from the municipality supply which are from deep bore wells and 13.95% were collected from hand pumps. Water iodine content was more than 10.1 μg/dl in 31.5% of samples surveyed, 51.1% had 5.1-10 μg/dl and 9.3% had less than 5 μg/dl. The mean iodine level among the water sample is 9.27±.4μg/dl and the range lay between 2-15 μg/dl. The mean iodine level, commune wise, is depicted in Table 1. The communes of Uppalam and Lawspet had higher levels of water iodine where as Muthialpet and Thattanchavady had lower levels of water iodine. 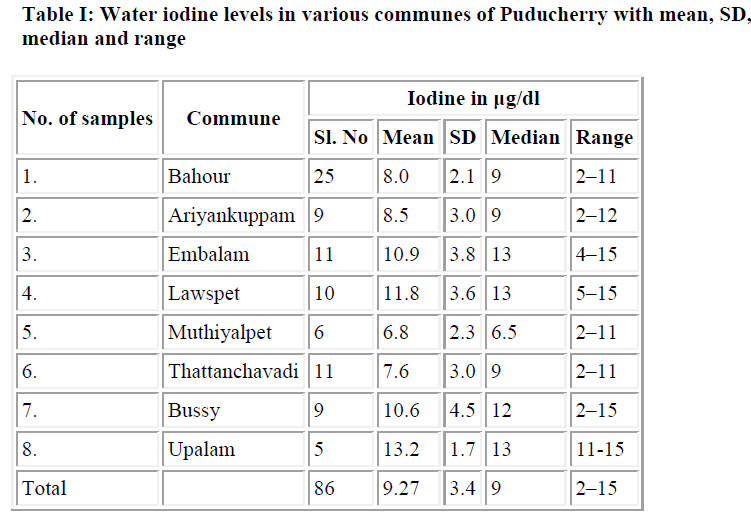 Table I: Water iodine levels in various communes of Puducherry with mean, SD, median and range

In many areas of India iodine deficiency still exists. In the current study 86 samples of water were collected from school children from their respective houses for determineing the water iodine content. The mean iodine level was found to be 9.2±3.4μg/dl with a range between 2 to 15 μg/dl. In a study conducted in sub-Himalayan zone of India, by Regional Medical Research Center (ICMR, Assam), the mean level of water iodine was much lower at 1.5±0.48 μg per liter [6]. The reason for this is that the sub –Himalayan zone is endemic for IDD.

In a study conducted by the Department of Nuclear Application, Ege University, Turkey, iodide concentration ranged from 1.8 to 100.4 μg per liter with a mean of 44.1±17.3 μg per liter in the analysed drinking water samples [7]. These results showed that the examined areas had marked diversity with pockets of moderate iodine deficiency. A high incidence of congenital hypothyroidism corresponding with a high percentage of water samples with iodine concentration < 2 μg per liter was found in a study in areas of Calabria, Italy[8]. In Egypt, an epidemiologic study was conducted among school children to look for iodine deficiency disorders and potential risk factors for the same, it was concluded that children in house holds where drinking water had an iodine content of less then 0.5 μg/dl were likely to develop goiter [9].

A study conducted in Pondicherry by Salt Department, Jaipur, Government of India and Human Nutrition Unit, AIIMS, New Delhi showed the urinary iodine excretion to be more than 100 μg per liter in 85% of study population [1]. In the same study only 17.2% of the population was found to be consuming iodised salt with more than 15 ppm of iodine. However, no systematic survey has been conducted in the UT regarding IDD prevalence though goiter cases have been reported. In spite of this, it might be said that water iodine levels contribute significantly to the daily intake of iodine and offer protection against IDD.

Water iodine levels were estimated in 86 samples from 8 communes in the district of Puducherry. The mean water iodine level was found to be 9.3 ±3.4 μg/dl. This iodine content of water, apparently, is contributing significantly to the daily requirement of iodine of the population. In spite of that, the salt iodisation program should be continued as few of the communes have low level of iodine in drinking water.

We acknowledge the Directorate of School Education, Govt. of Pondicherry for permitting our team to collect the water samples from various primary schools of Pondicherry region. We also thank Mr. Aravind Kumar G., and Mr. Saravana kumar R of Sixth Semester (3rd MBBS) students and Mr. Badri Narayan of department of Biochemistry for assisting in field survey and sample collection. The present study would not have been possible with out active support form the management of Mahatma Gandhi Medical College and Research Institute, Pondicherry.