Background and Aim: To objectively assess splenic volume preoperatively, the Standard Splenic Volume (SSV) was calculated for each patient. Whether it could be used to evaluate the functional hepatic reserve less invasively before major hepatectomy was then examined.

Conclusion: By comparing the preoperative SV and SSV of patients, objective assessments of the patients’ preoperative portal venous pressure were obtained noninvasively. We believe that this ratio may provide useful information for evaluating functional hepatic reserve at the time of initial surgery for diseases that may require repeat hepatectomies or multidisciplinary treatment.

The liver and spleen are anatomically connected through the portal venous system, and they are known to be closely related to each other, since both are immunological tissues affected by portal vein pressure. The volumes of the liver and spleen change according to pathological conditions, respectively. Liu et al. reported that the Liver Volume-to-Splenic Volume (LV/SV) ratio decreases with the progression and increasing severity of liver fibrosis in patients with chronic liver diseases [1]. Since the difference in the amount of this decrease between normal individuals and patients with cirrhosis was significant, the authors believe that the LV/SV ratio could serve as an indicator of liver fibrosis. Currently, with the development of various types of simulation software, Liver Volume (LV) and Splenic Volume (SV) can be accurately measured using Computed Tomography (CT) [2,3].

However, although SV is measured in several countries, measurement methods vary greatly, and the levels and correlation factors differ greatly among ethnic groups [6-11]. Therefore, a formula for calculating the Standard Splenic Volume (SSV) has yet to be established.

Using CT, along with new simulation software, a formula for calculating the SSV was derived, and whether it could be applied in the clinical setting, such as using it in the evaluation of functional hepatic reserve, was evaluated. The objective of this study was to apply morphometric analyses such as SV/SSV to noninvasive evaluations of portal pressure.

This study was conducted after obtaining Institutional Review Board approval from Iwate Medical University School of Medicine. A total of 70 patients (23 men, 47 women; mean age 62.4 y; age range 50 to 79 y) who had undergone surgery, excluding liver surgery, for benign and early-stage cancer from December 2007 to November 2013 in our department were analysed (Table 1). All patients were negative for various types of hepatic viruses, did not have hepatic or renal dysfunction, and did not exhibit blood disorders or infections. Four liver transplant donors were also included.

Table 1. Characteristics of the 70 enrolled patients to calculate the SV

SV was measured from abdominal CT taken within 1 month before surgery. Body Weight (BW) and Height (BH) measurements were obtained at the time of the CT examination or within 1 month before or after the examination, and the Body Mass Index (BMI) and Body Surface Area (BSA) were calculated from these measurements. BMI was calculated using the formula BMI=BW/BH2, and BSA was calculated using the formula BSA (m2)=BW0.425 × BH0.725 × 0.007184 (the DuBois formula) [12]. By examining the correlation between SV and these measurements, we proposed a formula for calculating SSV.

Table 2. Characteristics of the 63 patients who underwent sectionectomy or hemihepatectomy.

Surgical procedures were classified according to the Brisbane 2000 nomenclature of liver resection.[13] The two groups were then compared for various factors: TBil, Platelet count (Plt), Prothrombin Time (PT) (excluding three people who had taken warfarin orally for Af control purposes), and indocyanine green retention rate at 15 min (ICG R15) as preoperative factors; intraoperative blood loss volume, transfusion rate, presence/absence of bile leakage (in particular, in cases of insertion of the drain for more than two weeks or a new insertion to drain bile, whether bile leakage had occurred was confirmed), and maximum TBil levels in the immediate postoperative period as intraoperative and early postoperative factors; and the TBil levels at six months after surgery as a late postoperative factor.

The statistical analyses were performed using Stata 13 (Stata Corporation, College Station, TX, USA). In analyses and comparisons of preoperative covariates and clinical parameters, Student’s t-test or the Wilcoxon rank-sum test for continuous variables and the χ2 test or Fisher’s exact test for categorical variables were used. A p-value<0.05 was considered significant. Least-squares regression was used to establish possible linear relationships between the dependent and individual independent variables. The significance of regressions was determined by the F-test. The term R2 was the multiple regression counterpart of r2 and was defined in exactly the same way. As a general rule, corrected R2 was a more useful measure for comparing different regression equations for the same dependent variable. The area under the ROC was calculated to compare the predictive accuracy of the preoperative factor effected on the late postoperative TBil; and the cut-off value of the preoperative factor was calculated by the ROC.

The mean value of the SV measured using CT in the 70 adult patients was 101.65 ml (range 40.06 to 198.78 ml). The mean values of each parameter and the correlations between the SV and each parameter are shown in Table 3. Of these parameters, BSA showed the strongest correlation with the SV (r=0.777, corrected R2=0.598, P<0.001). Based on these results, linear regression analysis to predict the SSV was performed, and the following equation was obtained: SSV (cm3)=177.7 × BSA-179.9. In addition, the correlation between the SV and BSA was as shown in Figure 1.

Table 3. Parameters of the 70 enrolled patients and correlations between SV and these parameters. 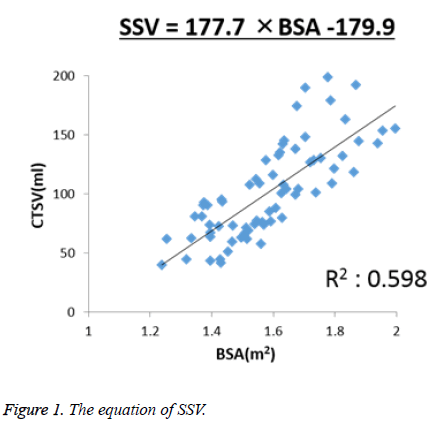 Figure 1: The equation of SSV.

An odds ratio was taken to examine the association between late postoperative TBil and preoperative PT, ICG R15, SV/ SSV, intraoperative blood loss, and hepatic resection rate in 63 patients after sectionectomy or hemihepatectomy. The strongest correlative factor was SV/SSV (Table 4). Furthermore, creating the ROC for SV/SSV, the cut off value became 1.1. Furthermore, the area under ROC for SV/SSV in the first 33 patients was 0.75, and the area under ROC in the second 30 patients was 0.816. For this reason, the cut-off value of SV/SSV became 1.1.

The groups were then compared for preoperative, intraoperative and postoperative factors. Although there were significant cases of hemihepatectomy in Group B, no significant difference was observed in the ratio of remnant LV to total LV.

Table 5. Parameters of groups A and B.

Heymsfield et al. used CT to measure splenic mass, calculating it by totalling the areas of each slice [17]. The calculated value showed a significant correlation with the splenic mass determined at autopsy. Kaneko et al. measured spleen volume in 150 healthy adults who later became liver transplant donors and reported that their mean spleen volume was 112 cm3 [18]. In the present study, Fujifilm Medical Company's Synapse Vincent version 2, a 3D image analysis system that transforms two-dimensional CT images to 3D images, was used to automatically measure SV. In the present study, the mean spleen weight was 101.65 ± 39.68 ml, a value slightly lower than that reported by Kaneko et al. In the present study, patients who had undergone a sectionectomy or hemihepatectomy, the majority of whom were 50-79 y old, were investigated. In general, the spleen decreases in size with age after peaking during early adulthood. Limiting the study subjects to those who were 50-79 y old may have been the reason for the lower observed spleen weight in this study compared to the values reported by Kaneko et al. Furthermore, when study subjects were limited to this age group and the age parameter was excluded, BSA was the parameter with the strongest correlation with spleen weight. There are several limitations in this study. Spleen volume might be affected by a patient’s age, so we limited the participants to those patients between the ages of 50 and 79 y old. We chose this age range because most of the patients who underwent sectionectomies and hemihepatectomies were 50-79 y old. Another limitation is that we recruited patients with early-stage cancer to calculate a formula of SSV, because there were few opportunities to do this when a normal, healthy subject received a CT.

In the present study, a formula for calculating the SSV was determined using CT in 63 patients who underwent a sectionectomy or hemihepatectomy, and the clinical applicability of this formula was evaluated by assessing its relationship with the preoperative SV. Although none of the 33 patients (0%) in group A had postoperative TBil levels ≥ 1.2 mg/dl, nine of the 30 patients (30%) in group B had postoperative TBil levels ≥ 1.2 mg/dl.

As shown in the results in Table 5, there are many cases of hemihepatectomy in group B, it was considered that there is a possibility that postoperative TBil levels may be prolonged as the operation procedure for an extensive hepatectomy is performed. However, as there was no significant difference in the ratio of remnant LV to total LV between the two groups, it is unlikely that the operative procedure is a factor influencing the postoperative liver function.

We surmised that this was because the patient groups had similar reserve functions in the background liver and had normal bilirubin production, metabolism, and excretion. For the 30 patients in group B, the amount of blood loss in the nine patients with a postoperative TBil levels ≥ 1.2 mg/dl was not significantly different from that in the other 21 patients, while a comparison of blood loss between those nine patients and the 33 patients in Group A also showed no significant difference. Based on these findings, we concluded that intraoperative blood loss is not necessarily related to elevated postoperative TBil levels.

Clear evidence of portal hypertension that accompanies primary liver diseases, such as tumors or liver fibrosis, was not observed in group A, which suggested that liver regeneration after hepatectomy would occur normally in these patients. This suggests that postoperative functional hepatic reserve is sufficiently secured as long as the preoperative CTSV/SSV is <1.1, even in cases that require a sectionectomy or hemihepatectomy. However, this also suggests that, in patients whose preoperative CTSV/SSV is ≥ 1.1, a sectionectomy or hemihepatectomy may worsen their postoperative functional hepatic reserve compared to their preoperative levels despite an uneventful perioperative course.

In the present study, preoperative SV and SSV were compared in patients who underwent a sectionectomy or hemihepatectomy, and an objective measure of preoperative splenomegaly and, thus, portal venous pressure was obtained. In particular, the present results suggest that prolonged postoperative TBil levels ≥ 1.2 mg/dl may occur when the ratio of preoperative SV/SSV is ≥ 1.1. In diseases that may require repeat hepatectomies or multidisciplinary treatment, such as colorectal liver metastasis or hepatocellular carcinoma, this ratio of preoperative SV to the SSV may provide useful information for evaluating the functional hepatic reserve at the time of initial surgery.

This study was conducted after obtaining Institutional Review Board approval from Iwate Medical University School of Medicine.

Written informed consent was obtained from the patient for publication of this study.

SN is the main author of this article. SN, TT and YH conceived this study. TT, YH and AS supervised the manuscript writing. SN, HK, SK, YA, TI, HN, KO and KK contributed to the collection of clinical information and data analysis. TT and YH reviewed the manuscript and revised it thoroughly. All authors have read and approved the final manuscript.