Conclusion: In patients with advanced CRC undergoing oxaliplatin-based chemotherapy, there is no correlation between ERCC1 Asn118Asn (C/T) gene polymorphism and therapeutic effects. Asian patients with T allele has shorter PFS and OS.

Colorectal cancer (CRC) is the third most common malignancies in the world [1], with increasing morbidity and mortality [2,3]. Currently the most effective treatment for colorectal cancer is still surgery. However, after radical resection a large number of patients appear in situ recurrence and distant metastasis. Moreover, some patients are in advanced stage at diagnosis and lose the opportunity for radical resection [4,5]. Various studies have currently confirmed that the chemotherapy can improve the quality of life and prolong the survival time of CRC patients. The national comprehensive cancer network (NCCN) has proposed oxaliplatin combined with 5-fluorouracil as standard first line treatment guidelines for colorectal cancer therapy [6].

CRC patients showed different reactions with the same intensity of chemotherapy drugs, and some patients do not benefit from chemotherapy. Moreover, a considerable portion of patients with oxaliplatin based chemotherapy appear different degree of peripheral neurotoxicity. Therefore, if the clinical curative effect of oxaliplatin could be predicted, clinicians can choose a chemotherapy regimen with high efficiency and low toxicity according to the inspection results.

Although the ERCC1 Asn118Asn function is not completely clear, it is confirmed that polymorphism of this locus might be associated with efficacy and prognosis by platinum drugs [14,15], with some controversy between the study results. Therefore, this article utilized the meta-analysis to make comprehensive evaluation on association between ERCC1 Asn118Asn polymorphism and chemotherapeutic effects in advanced CRC patients receiving oxaliplatin based chemotherapy.

• The original literatures published in the full text.

• The article provides enough information, such as the effect odds ratio (OR) and 95% confidence interval (CI) in each genotype, or the OR and 95% CI could be calculated from the data.

• The distribution of the genotypes in the literature conformed to the Hardy-Weinberg equilibrium.

• The data were not complete, or repeated literatures.

• The use of other languages except Chinese or English.

Literatures were searched on published databases of PubMed, EMBASE, web of science, CNKI, VIP, Wanfang and CBM. Meanwhile, literatures were also manually searched on references of reviews. The English retrieval words were used for searching as following: ERCC1 or excision repair crosscomplementing group 1; colon or colorectal cancer; polymorphism or variant; treatment or chemotherapy. The retrieval time was up to January 31, 2015.

After the included studies were determined, two authors were appointed to read text and extract data information from each included study, including title, author, publication year, study countries, the race of study subject and the number of cases.

The evaluation on the therapeutic effects of chemotherapy is made according to the World Health Organization (who) standards or the response evaluation criteria in solid tumors (RECIST 1.0) [16], and is mainly divided into the following categories: complete remission (CR), partial remission (PR), stable disease (SD) and progress disease (PD). In this study we defined the efficacy as response (PR+CR) and non-response (SD+PD). The genetic data were extracted and the hazard ratios (HR) and 95% CI in each literature were pooled and analyzed for prognosis.

The funnel plot was drawn to judge publication bias by Begger method. The included literature therapy was evaluated by Newcastle-Ottawa scale (NOS). 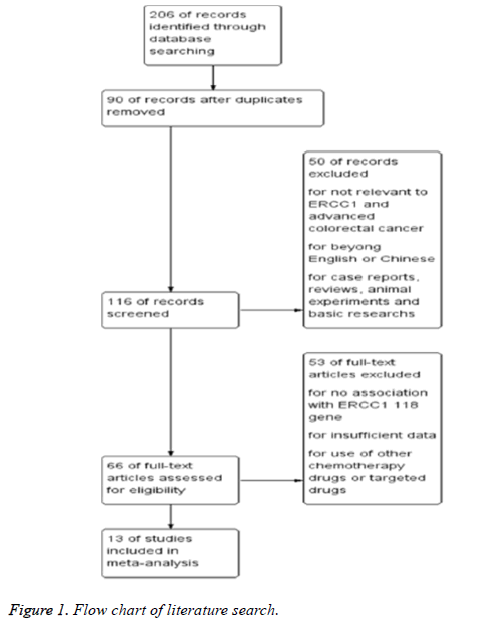 Meta-analysis was performed on the association between ERCC1 Asn118Asn gene polymorphism and effective rate of oxaliplatin in advanced CRC. Heterogeneity test showed that I2 value >75%, and the random-effect model was used to calculate the combined effect value. A total of 9 articles were included, among which 4 articles were analyzed for effect values by merging the CT and TT values, while 5 articles were analyzed for effect values in TT vs. CT (OR=0.91, 95% CI 0.59~1.55), with no statistical significance between the two groups. However, there were statistically significant differences between two groups in effect values co-dominant model TT vs CC (OR=3.08, 95% CI=0.898~10.533, P=0.030) and the dominant model CT/TT vs CC (OR=2.403, 95% CI=0.975~5.927, P=0.042). Therefore, T allele shows dominant inheritance in platinum chemotherapy sensitivity of patients with advanced CRC. Combined test was further performed on dominant genetic model CC+TT vs. CC, and no statistically significantly difference was found (OR=0.777, 95% CI=0.292~2.068, P=0.613).

This study was analyzed according to the ethnicity of subjects of included literatures. The results showed that in the dominant model there were no significant correlation in Caucasian and Asian populations between advanced CRC patients carrying T allele in ERCC1 polymorphism Asn 118Asn and the efficacy of oxaliplatin chemotherapy (OR=2.03 vs. 0.40, 95% CI=0.62-6.68 vs. 0.12-1.30). 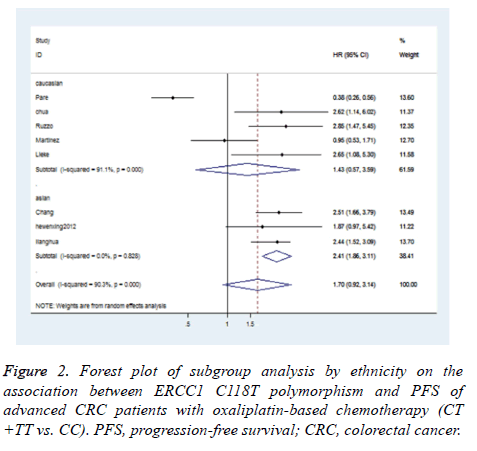 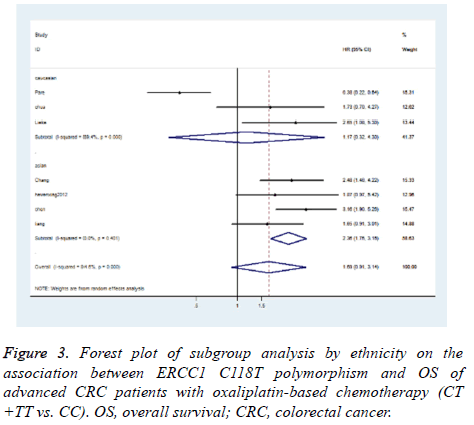 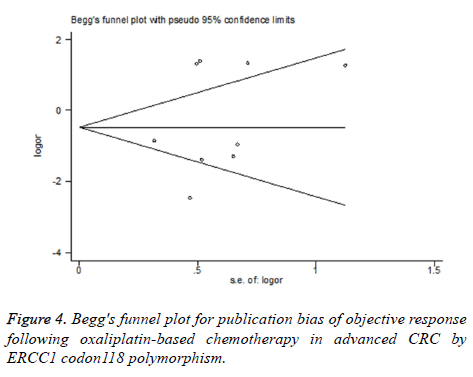 Meta-analysis was performed after excluding each literature step by step, and the pooled results showed no significant difference, suggesting stability of the included literature.

Currently studies are rarely reported on the relationship between ERCC1 gene polymorphism and platinum based chemotherapy sensitivity. Moreover, SNP at 118 codon of ERCC1 gene has been confirmed correlation with ERCC1 mRNA and protein expression levels [8,24]. Studied have been carried out to assess effect of oxaliplatin chemotherapy in advanced CRC patients carrying ERCC1 118 codon SNP. However, it is unclear whether this polymorphism can change ERCC1 protein expression level or capability of DNA repair.

In this study, clinical efficacy rate (PR+CR) was used as the main index to evaluate chemotherapy. The meta-analysis results showed no correlation between Asn118Asn polymorphism and chemotherapy efficiency, PFS or OS of advanced CRC patients, which was consistent with the results of one previous meta-analysis [30]. However, recently a metaanalysis has reported correlations of ERCC1 Asn118Asn polymorphism with PFS and OS [31], and our results did not confirm it. In fact, our study also contains some advantages. Previous meta-analysis was mostly based on the evaluation of the clinical efficacy of gastric and colon cancer. Considering the heterogeneity of gastric and colon cancer and different biological activity and pathological types, our study selected advanced colorectal cancer as the research subject and made more precise and comprehensive study on chemotherapy efficiency of oxaliplatin.

Subgroup analysis was performed mainly according to the different races. In Asian population, ERCC1 Asn118Asn polymorphism was correlated with PFS and OS of advanced CRC patients, and patients carrying the T allele had significantly shorter PFS and OS. The Caucasian populations showed the opposite results, with significantly longer PFS and OS in patients carrying the T allele. The results of subgroup analyses were consistent with the results of previous studies [31].

There was still some limitations in this study due to small sample size, as shown in following: 1) Selection bias. This study included only the published literature in English or Chinese, and conference or summary literatures were excluded. Literatures which used targeted or other treatments were also excluded; 2) The overall sample size was small and could not represent the overall population; 3) Language bias. Literatures using other languages besides English and Chinese were not included in this study; 4) Different chemotherapy regimens and detection methods may have certain impact on the outcome of the study; 5) Many literatures with negative results cannot be retrieved in our study.

In conclusion, ERCC1 Asn118Asn gene polymorphism may be correlated with cancer platinum class about chemotherapeutic effect and prognosis of platinum drugs in advanced CRC patients. Due to small sample size, the results of this study need to be confirmed by large sample and high quality clinical investigation.