Background: We describe a case of epithelioid angiosarcoma arising in the vagus nerve schwannoma of a 58 y old man.

Case presentation: Angiosarcoma rarely arises in a schwannoma, and epithelioid angiosarcoma arising in a vagus nerve schwannoma is exceedingly rare. We reported such a case in a 58 y old man who did not have neurofibromatosis. A mass on the right neck along the vagus nerve was noted to be present for six months and then was totally resected. After surgical resection, the neck location swelled/enlarged gradually over 6 months. Enhanced Magnetic Resonance Imaging (MRI) revealed an extremely invasive tumour with multiple enlarged lymph nodes of the bilateral neck that were diagnosed as a neoplasm recurrence with lymphatic metastasis and lymphovascular invasion. The reported cases and this case suggested a poor prognosis, including a high rate of recurrence, metastasis and death. Preoperative diagnosis, prognostic factors, and proposed histogenesis need to be discussed further. 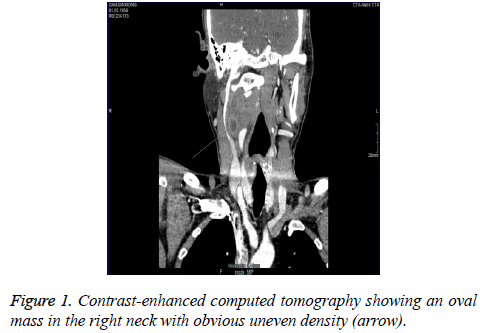 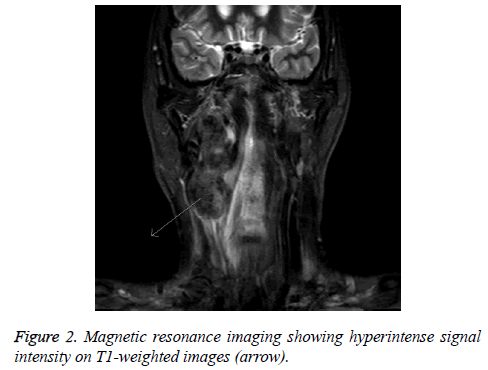 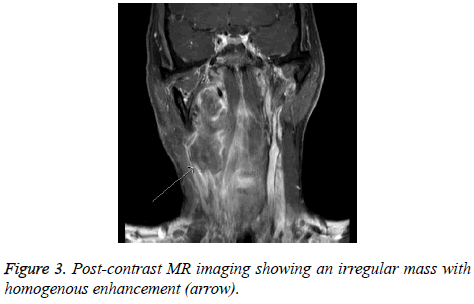 The tumour was surgically resected immediately, and the pathology showed that it recurred with lymphatic metastasis (Figure 4) and lymphovascular invasion after six months of follow-up. Further surgical resection was performed. 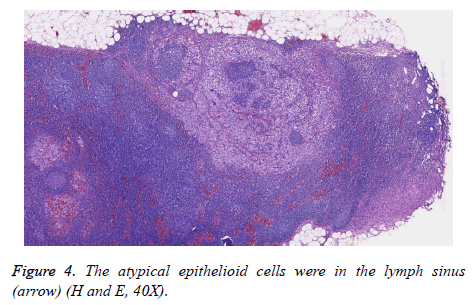 Figure 4: The atypical epithelioid cells were in the lymph sinus (arrow) (H and E, 40X).

Macroscopically, the primary tumour was an encapsulated oval mass measuring 6.5 × 3.8 × 2 cm. Based on a cut section, the tumour was solid-cystic, in which the solid area was primarily glossy with a mixture of grey-yellow and grey-white colour, and the cystic area was red-brown. At low magnification, the tumour had an intact fibrous capsule. Two components were distinct: the typical benign schwannoma and the focal epithelioid angiosarcoma in the central area of the schwannoma (Figure 5). The peripheral areas showed features of the benign schwannoma, which displayed two different patterns designated by Antoni as A and B. The type A areas were quite cellular and composed of spindle cells arranged in a palisading fashion or in an organoid arrangement (Verocay bodies). In type B areas, the tumour cells were separated by abundant oedematous fluid that formed cystic spaces. Thick– walled hyalinized vessels were commonly noticed. Pathologic mitoses were extremely absent. The malignant component was situated mostly centrally but extended peripherally, as well. The region showing anastomotic vascular channels was lined with atypical endothelial cells that contained abundant eosinophilic cytoplasm, vesicular nuclei and prominent eosinophilic nucleoli (Figures 6 and 7). Mitotic figures were readily encountered with an average of 2/10 HPF. Papillae formed within some of the channels. There were some areas of necrosis and local haemorrhage. 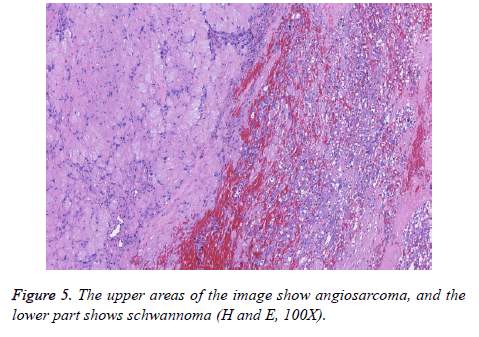 Figure 5: The upper areas of the image show angiosarcoma, and the lower part shows schwannoma (H and E, 100X). 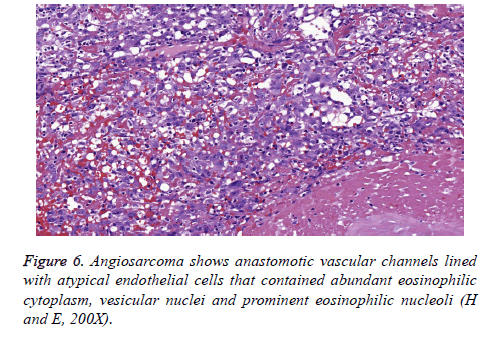 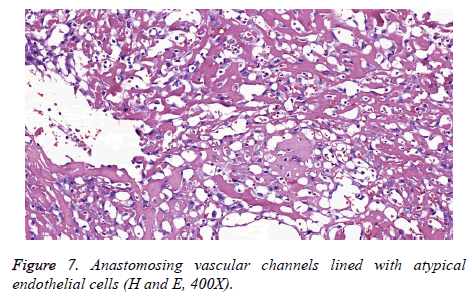 On immunohistochemistry, Schwann cells were diffusely and strongly immunoreactive to S100 (Figure 8) and showed a low proliferation index (Ki67=1%), whereas the epithelioid tumour cells were negative for S100 and showed high proliferative activity (Ki67=50%). They were positive for CD31, FLI-1, CK (pan) and focally positive for CD34 (Figures 9 and 10). The primary antibodies used were Ki67 (1:200), S100 (1:300), CD31 (1:30), FLI-1 (1:200), CK (pan) (1:400) and CD34 (1:200). Immunohistochemistry was performed on the DAKO Autostainer (Dako, Carpinteria, CA, USA) using the standard Envision method. All antibodies were provided by Maxin Bio. For each antibody, appropriate positive and negative controls were included. 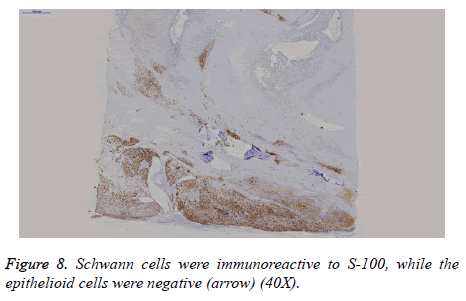 Figure 8: Schwann cells were immunoreactive to S-100, while the epithelioid cells were negative (arrow) (40X). 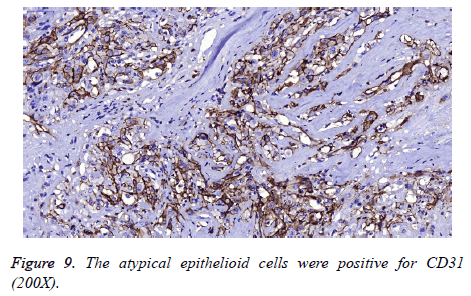 Figure 9: The atypical epithelioid cells were positive for CD31 (200X). 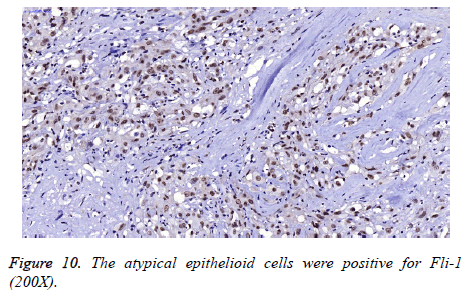 Figure 10: The atypical epithelioid cells were positive for Fli-1 (200X).

Schwannoma is a benign, usually encapsulated, nerve sheath tumour that occurs most frequently in the head and neck and extremities, followed by the mediastinum and retroperitoneum. It may be associated with neurofibroma types 1 or 2. Grossly, the tumour was well encapsulated with light tan and glistening cut surface. On microscopy, the tumour had two distinct patterns, designated by Antoni as A and B, with the presence of Verocay bodies. Hyaline thickening of the vessel wall is always present in schwannomas. Cells seem very moderate, and mitoses are usually absent or extremely scant. Immunohistochemically, the spindled cells are diffusely reactive for S-100 antigen. This tumour generally follows a benign clinical course after complete surgical excision. Local recurrence has occurred in a few patients. Malignant transformation in a schwannoma has rarely been reported. The malignant component is either in the form of Malignant Peripheral Nerve Sheath Tumours (MPNST) or, more exceptionally, Epithelioid Malignant Change (EMC). Angiosarcoma arising in a sporadic schwannoma represents a rare case. McMenamin [2] reviewed 17 cases of schwannoma with evidence of malignant changes. Amongst the 17 cases, nine were labeled EMC, and four cases were described as angiosarcoma.

Angiosarcoma is a malignant neoplasm arising from the endothelial cells of the blood vessels. It is usually seen in adults and the elderly, but it can also occur in children. The most common locations are the skin, soft tissue, breast, bone, liver, and spleen. Grossly, angiosarcomas tend to be highly haemorrhagic and deeply invasive.

The microscopic examination of the epithelial angiosarcoma demonstrated an ill-defined infiltrating malignant growth composed of epithelioid cells arranged in sheets, small nests, cords and rudimentary vascular channels with focal papillary areas. These rudimentary vascular channels were unlike normal vascular channels and these neoplastic channels are irregular in shape, freely intercommunicate with one another in a sinusoidal fashion, and infiltrate the surrounding tissues in a destructive fashion. The neoplastic cells were large and rounded with a moderate amount of cytoplasm, large vesicular nuclei and prominent nucleoli. The cells also featured high grade anaplasia together with frequent mitoses. Based on immunohistochemical examination, the neoplastic cells showed strong positive immunostaining for CD31 and FLI-1 and focal positivity for CD34. The tumour cells also exhibited focal but strong positivity for CK (pan).

As of 2015, the literature mentioned 18 cases of angiosarcoma arising in schwannoma (Table 1). Only 1 case was found to be associated with NF 2 [3]. Two cases [3,4] were masses at cranial sites. Amongst these cases, only 7 cases of angiosarcoma developed in a schwannoma arising from the vagus nerve in the neck. These patients were in the age group of 17-74 y with a mean age of 53.6 y and were predominantly male (64.7%). It is difficult to diagnose angiosarcoma arising in a schwannoma with FNA, and the rate of accuracy is only 20%. The preoperative MRI of our patient revealed an irregular mass with enlarged lymph nodes showing contrast medium enhancement, suggesting malignant transformation of the schwannoma. Ogawa et al. [5] described that it can be detected earlier and receive better follow-up with MRI and FNA.

The histogenesis of angiosarcoma arising in schwannoma is controversial. Lee et al. [6] reported a case in which a patient had left lower limb paralysis as a sequela of poliomyelitis since childhood. Chronic vascular stasis and the presence of a longstanding schwannoma may play some role in pathogenesis. Hypothetically, the tumour may be associated with a direct occurrence from the tumour vasculature in the background of chronic vascular stasis and oedema, a situation analogous to angiosarcoma developing in the setting of chronic lymphedema [1,2,7] or from angiogenic factors such as vascular endothelial growth factors [8].

Several other theories have been proposed, including angiosarcoma associated with neurofibromatosis [9] and metaplasia of cells within malignant divergent schwannomas [10]. Mentzel et al. [8] stated that Vascular Endothelial Cell Growth Factor (VEGF), an antigenic factor, might play a role in the pathogenesis of angiosarcoma arising in schwannoma.

Trassard et al. found Weibel-Palade bodies in the cytoplasm of angiosarcoma cells by electron microscopy and suggested that angiosarcoma possibly arose from pre-existing vascular tissue of schwannoma. This theory was supported by most scholars [4].

The neoplasm should be differentiated from epithelioid mimickers such as carcinoma, epithelioid malignant mesothelioma, degenerate schwannoma and melanoma by using markers [2]. The great pleomorphism, frequent mitoses, solid growth pattern and necrosis could differentiate angiosarcoma arising in schwannoma from other tumours.

The tumour has aggressive behaviour. It can cause local recurrence, distant metastasis, and death. Li et al. [11] noted that incomplete resection, penetration of the capsule with invasion of adjacent tissue and large tumour size were associated with poor outcomes. In some reported cases, radiotherapy and chemotherapy were conducted to prevent recurrence. However, only one case was free of disease 90 months after surgery [1]. In our case, the tumour was completely excised. Unfortunately, local recurrence and lymph metastases occurred 6 months after surgery.

We have reported a rare case of an epithelial angiosarcoma arising in a vagus nerve schwannoma. Morphology and immunohistochemistry are the most important tools in the diagnosis. FNA and MRI examinations can be used for early prognosis and follow-up. Because of the poor prognosis, early and complete surgical excision of the tumour is required. Radiotherapy and chemotherapy may also have some benefit. Further study is needed.

Written informed consent was obtained from the patient for publication of this case report and any accompanying images. A copy of the written consent is available for review by the Editor-in-Chief of this journal.

There are no supporting data available.

There are no funding sources for this study.

We thank the patient, who requested anonymity, for agreeing to our report and for providing a detailed medical history.