Episodic syncope and bradycardia due to small cell lung cancer: A case report.

A 58-year-old woman with limited-disease small cell lung cancer (SCLC) presented with episodic syncope and bradycardia. Probable etiologies such as orthostatic hypotension, cardiac syncope, brain-derived syncope, and metabolic problems were excluded after extended examination. No further syncopal attacks were observed after the third day of the first course of chemotherapy. We finally diagnosed this case as neurally mediated syncope. Treatment of the underlying disease with chemotherapy or radiotherapy should be the main therapy for malignancy-related syncope.

A 58-year-old woman with a medical history of kidney stones was admitted to our hospital for lung cancer and episodic syncope. She reported an aggravating dry cough for three months and was diagnosed as small cell lung cancer through trans bronchial lung biopsy at a local hospital three weeks ago. She experienced several episodes of syncope in the preceding two weeks. The syncope seemed to occur when she felt stabbing pain in left chest. She could recover spontaneously or by taking anisodamine, a cholinergic type M receptor blocker, in no more than 2 minutes, without any speech or limb movement disorder. The attacks occurred once to twice a day in different body postures, and had no relation with head movement or position.

On admission in our hospital, findings on physical examination of the heart, abdomen, and neurological system were unremarkable except for local rhonchi in the left lower lung field. She had no orthostatic hypotension. There were no abnormalities in blood glucose, electrolytes, cardiac markers or other blood chemistry results. Serum tumor marker levels were elevated (NSE 40.25 ng/mL, normal <16.3 ng/mL; CEA 11.53 ng/mL, normal <5.0 ng/mL). An electrocardiogram (ECG) (Figure 1), brain MRI and MRA showed nothing abnormal. 24 h Holter ECG (when no syncope attack) showed normal sinus rhythm, average heart rate (HR) 73 bpm (53-113 bpm), SDNN 107 ms, the longest R-R interval 1427 ms. An UCG showed a mass-like echo out of the lateral wall of left atria, the structure and function of the heart was normal (Figure 2). PET-CT showed a mass measuring 6.3 × 6.3 × 4.5 cm in the left lower lung near the left hilum with glucose metabolism increased, invading thoracic aorta probably; a mass measuring 4.1 × 3.5 × 2.9 cm in left lower basal segment with increased glucose metabolism, considering direct infiltration of tumor; pretracheal lymph node enlargement with increased glucose metabolism, interpreted as nodal metastasis (Figure 3). There was no evidence of any other metastatic sites. Therefore, the diagnosis was made of limited disease small cell lung cancer (T3N3M0, IIIB). 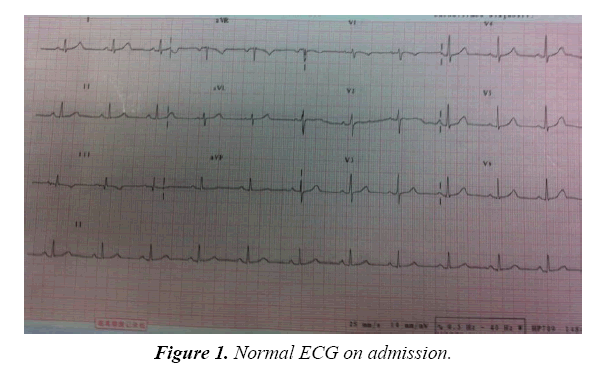 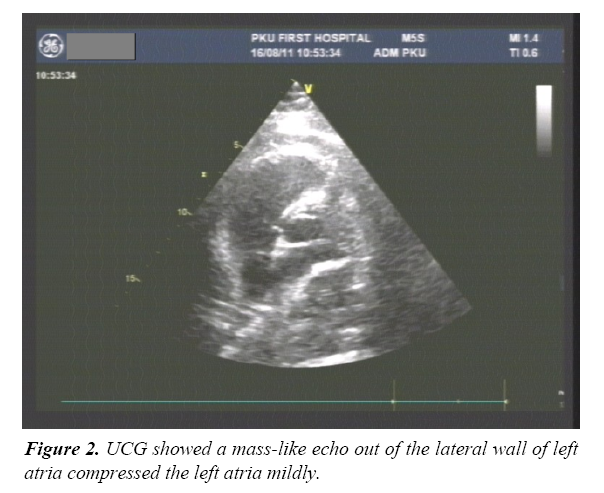 Figure 2: UCG showed a mass-like echo out of the lateral wall of left atria compressed the left atria mildly. 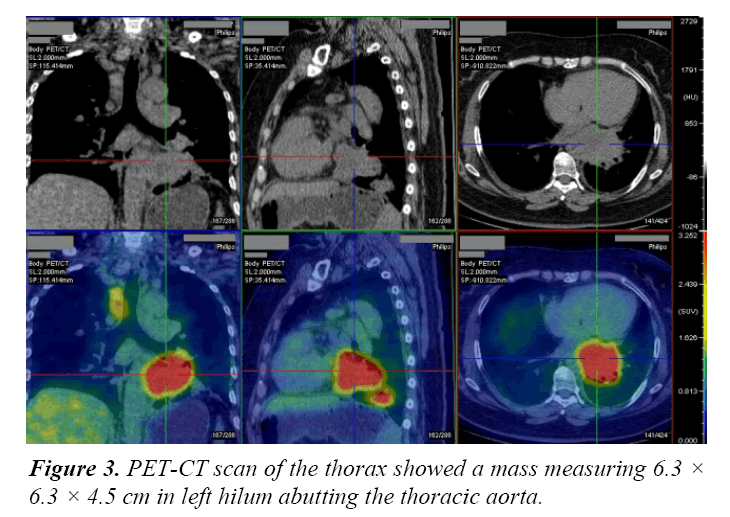 On the second day of admission, she felt stabbing chest pain while resting in bed at daytime, ECG monitoring revealed severe sinus bradycardia (heart rate 38 bpm, blood pressure 105/60 mmHg) without obvious ST-T change. Her HR rose to 77 bpm and chest pain relieved within three minutes after given a single dose of anisodamine 10 mg sublingual. When she was fast asleep at midnight, ECG monitoring revealed her HR dropped to 23 bpm, the longest R-R interval was 3.36 seconds. She was woken up and took the same dose of anisodamine, her HR rose to normal immediately. On the third day, she had an attack of syncope with her HR dropping to 30 bpm, the longest R-R interval 4.16 seconds on ECG monitoring. The syncopal attack was easily managed with sublingual anisodamine again. Blood glucose, electrolytes, cardiac markers were always normal checked on each attack. Her performance status (PS) was grade 1. Due to her frequent syncope and bradycardia, a temporary pacemaker implantation was advised before chemotherapy. But the patient refused and went to another hospital, where she was treated with combined chemotherapy with carboplatin plus etoposide. Her episodic syncope and bradycardia never occurred after the 3rd day of the first course of chemotherapy. The patient showed complete response (CR) after a total of four courses of chemotherapy followed by irradiation (totally 68.6 Gy for 38 days). During the 19-month follow-up period, she had no more episodes of syncope or bradycardia.

SCLC is well known to be frequently associated with a variety of paraneoplastic neurogenic syndromes (PNS), such as myasthenia gravis (MG), Lambert-Eaton myasthenic syndrome (LEMS) and limbic encephalitis. Serum tests for anti-Hu and anti-Yo antibodies are usually positive in PNS [1,2]. These patients often present with constant, progressive dysfunction until complete remission of the tumor. The symptoms of our patient appeared after the emergence of SCLC and disappeared soon after the treatment of the tumor. Probable etiologies such as orthostatic hypotension, cardiac syncope, brain-derived syncope, and metabolic problems were excluded after extended examination. Though we didn’t test the serum anti-Hu and anti- Yo antibodies, the intermittent episodes and early disappearance after chemotherapy of our patient could not be well explained by PNS.

We propose that this kind of malignancy-induced episodic syncope and bradycardia maybe a “location-dependent phenomenon” other than SCLC-dependent [7]. Reported a case of recurrent syncope as initial presenting symptom of metastatic lung squamous cell cancer. Masses in the left lower neck and mediastinum encased the left common carotid artery at the level of branching from the aorta where the cardiac branch of the vagus nerve went by. After effective treatment with systemic chemotherapy, the patient had no more episodes of syncope [8]. Reported a case of recurrent syncope due to cervical metastases of a cancer of the esophagus. The metastatic mass infiltrated the sheath of the right common carotid artery just below and in contact with the carotid bifurcation. Once his radiotherapy treatment began, he did not present any recurrence of syncope [9]. Reported a case of neurally mediated syncope with large cell lung cancer in the left hilum. The syncopal attack of that patient disappeared when lung cancer progressed involving the left recurrent laryngeal nerve resulting in the paralyses of the nerve and sustained hoarseness [10]. Report a case in which syncope was associated with a recurrence of tonsilar cancer compressing the left internal carotid artery and successfully treated with chemotherapy. This further confirmed the role of afferent vagus nerve in the occurrence of syncope. Do all these cases mean that all tumors locating on the path of the vagus nerve may produce overstimulation of the nerve leading to neurally mediated syncope? Further accumulation of cases is necessary to clarify the mechanism of development of syncope associated with malignancy.

The interests of the present clinical case lie in two points. Firstly, in view of the relatively good response to systemic treatment for lung cancer, treatment of the underlying disease with chemotherapy or radiotherapy should be the main therapy for malignancy-related syncope. Treatment should be initiated promptly. Secondly, since there can be no clinical symptoms in early lung cancer, if the patient presented with newly developed episodic syncope or bradycardia that was difficult to be explained by common reasons (disease), one should not forget the rare reason-lung cancer.