We investigated the epidemiological patterns and genetic variation of Human Respiratory Syncytial Virus (HRSV) isolated from Chungnam, Korea, during 2011-2014. It was screened 3,531 nasopharyngeal aspirate samples from patients with acute respiratory symptoms for HRSV and other respiratory viruses by real-time reverse-transcription polymerase chain reaction. Temporal distribution of the HRSV epidemic showed seasonal prevalence for early winter and mainly founded in children’s less than 3 years of age. Ninety-two (29.8%) HRSV-positive patients were co-infected with other respiratory viruses including human rhinovirus, adenovirus, and human bocavirus. In phylogenetic analysis of the isolated strains based on G-protein gene sequences, only one isolate (CNA013- 11/07-2011/Korea) was the GA5 genotype, 17 were the NA1 genotype, and all strains isolated after 2012 belonged to the ON1 genotype among the 47 HRSV-A strains. All 18 HRSV-B strains isolated in this study belonged to the BA4 genotype. Continued studies on HRSV epidemiology and genetic diversity of circulating HRSV isolates are necessary to facilitate the development of efficacious vaccines and antiviral agents.

Human Respiratory Syncytial Virus (HRSV) is the second most common cause of acute respiratory infection in infants and young children, and is found mainly from late fall to spring in temperate countries [1,2]. Most infants experience HRSV infection in the first year of life, and nearly all are infected by 2 years of age [3]. HRSV, a member of the Pneumovirus genus of the Paramyxoviridae family, was first identified in 1956 [4]. The enveloped HRSV has a negative-sense, non-segmented single-stranded RNA genome that encodes for 11 distinct proteins, including Fusion Protein (F-protein) and attachment (G-protein) Glycoproteins that are capable of binding host cell receptors and are often targeted by the body’s antibody responses [5]. HRSV strains are classed into 2 major genogroups (A and B) based on the G-protein gene sequence, which is the main site of diversifying selection in the genome. As such, molecular analysis of the G-protein gene has been used to determine the HRSV genotype and to characterize diversity in HRSV strains [6,7]. Based on this method, HRSVA is divided into 11 genotypes (e.g., GA1-7, SAA1, NA1-2, and ON1) and HRSV-B into 23 genotypes (e.g., GB1-4, SAB1-4, URU1-2, BA1-12, and THB). Various viral genotypes co-circulate in epidemic seasons, but a new genotype can replace previously dominant strains [1,8]. Since no HRSV vaccine is currently available, the on-going regional surveillance and molecular characterization of circulating HRSV strains are necessary for vaccine and antiviral agent development [9]. In this study, we report an overview of the epidemiology and genetic diversity of HRSV isolates circulating within Chungnam, Korea, during a 4-year period from 2011 to 2014.

The samples used in this study were collected under the guidelines of the Korea Influenza and Respiratory Viruses Surveillance System with written informed consent. Between January 2011 and December 2014, a total of 3,531 nasopharyngeal specimens were obtained from patients presenting with symptoms of acute respiratory tract disease admitted to the local hospital in Chungnam province, Korea. Nasopharyngeal swabs were collected in 3 mL of universal viral transport medium (BD, Maryland, USA) and stored at -70ºC prior to analysis.

HRSV-A and B positive RNA samples were subjected to Gprotein gene amplification by RT-PCR using the Access RTPCR system (Promega, Madison, USA) per the manufacturer’s instructions with the following published primer sets: ABG490 located in the G-protein region (5'- ATGATTWYCAYTTTGAAGTGTTC-3') and F164 located in F-protein region (5'-GTTATGACACTGGTATACCAACC-3') [10]. RT-PCR was conducted under the following conditions: RT at 45ºC for 45 min and PCR at 95ºC for 5 min, 35 cycles (94ºC for 45 sec, 50ºC for 45 sec and 72ºC for 1 min) and 72ºC for 7 min.

G-protein gene sequences for 47 HRSV-A isolates and 18 HRSV-B isolates were compared with the reference sequences using Clustal W version. 2.1 [11]. Phylogenetic relationships among the isolates and reference strains were determined using MEGA software version. 6.0. Maximum composite likelihood was used as the substitution method, followed by the neighbour-joining method to reconstruct the phylogenetic tree [12]. The reliability of the constructed phylogenetic tree was determined by bootstrap re-sampling of 1,000 replicates.

The current study investigated the epidemic patterns and genetic diversity of HRSV isolates circulating within Chungnam, Korea, from 2011 to 2014. For this, 3,531 samples were obtained from patients presenting with acute respiratory symptoms, under the guidelines of the Korea Influenza and Respiratory Viruses Surveillance System. HRSV-positive isolates were subjected to G-protein gene sequencing and analysis. A total of 309 HRSV strains were identified: 92 isolates in 2011, 84 isolates in 2012, 91 isolates in 2013, and 42 isolates in 2014 as shown in Table 1. In this period, the annual peak of HRSV infection occurred during the early winter season, with incidences peaking from September to December (16.8%-31.9%) and high incidence being noted in November (31.9%) as shown in Figure 1. The majority of patients infected with HRSV were children under 3 years of age, accounting for 89.3% of all cases: 9.1% for infants aged 0 year, 36.6% for infants aged 1 year, 30.4% for children aged 2 years, and 13.2% for children aged 3 years as shown in Figure 2. The male-to-female ratio of infected individuals was 1.27:1. Co-infection with other respiratory viruses was detected in 92 patients (29.8%), and included HRV (46 samples), ADV (24 samples), HBoV (12 samples), HCoV (6 samples), and PIV (4 samples) as shown in Figure 3.

Table 1. The number of RSV detected in Chungnam Korea by age distribution from 2011 to 2014. 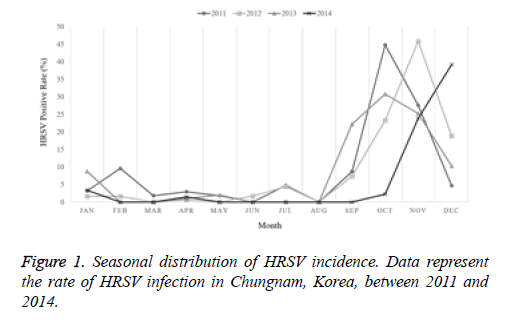 Figure 1: Seasonal distribution of HRSV incidence. Data represent the rate of HRSV infection in Chungnam, Korea, between 2011 and 2014. 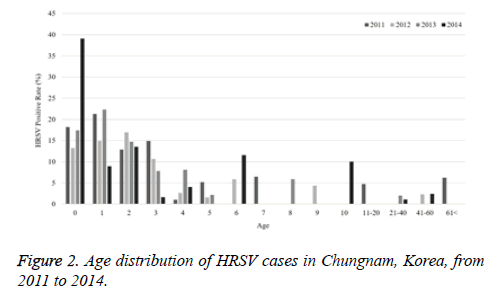 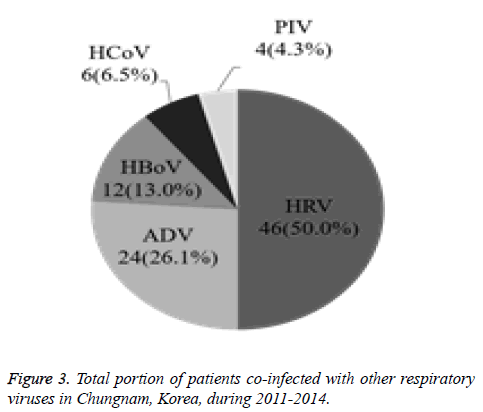 Figure 3: Total portion of patients co-infected with other respiratory viruses in Chungnam, Korea, during 2011-2014.

Phylogenetic analysis of HRSV-A and B

Sixty-five partial G-protein nucleotide sequences from isolates obtained in this study were used to construct phylogenetic trees (HRSV-A and -B) with reference strains deposited in the GenBank database as shown in Figure 4. In the HRSV-A phylogenetic analysis, 255 bp G-protein nucleotide sequences from 47 randomly selected strains were used to construct a phylogenetic tree with 30 references of the same type obtained from GenBank database. The HRSV-A strains were categorized into 11 distinct genetic groups, which were supported by high bootstrap values and previously reported clusters, including GA1-7 [3,13], NA1-2 [1], SAA1 [14], and ON1 [15]. Specifically, the 47 HRSV-A strains isolated in our study belonged to three previously defined clusters, GA5 (1 isolate), NA1 (17 isolates), and ON1 genotypes (29 isolates). Of note, strains isolated in 2011 showed an 8.8-12.2% and 10.1-18.8% nucleotide divergence from the GA5 and ON1 genotypes, respectively. 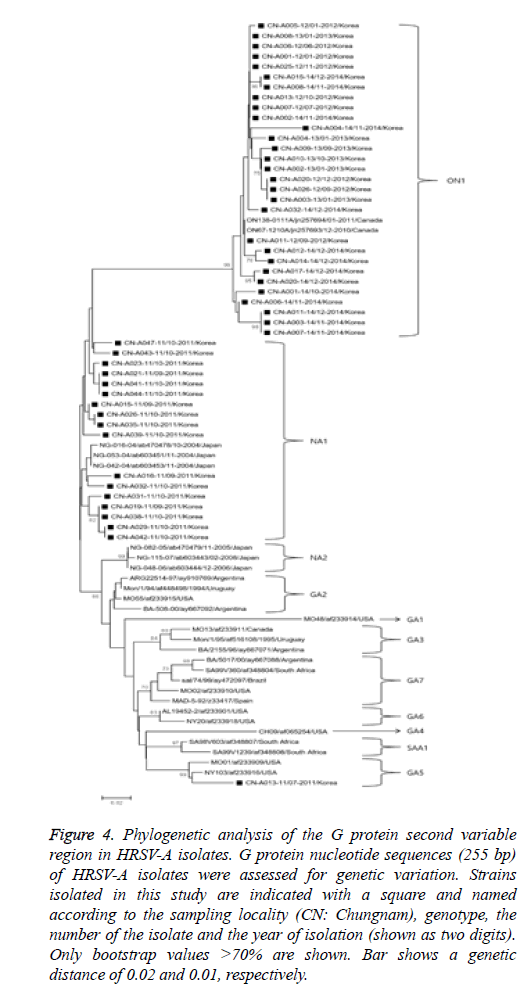 Figure 4: Phylogenetic analysis of the G protein second variable region in HRSV-A isolates. G protein nucleotide sequences (255 bp) of HRSV-A isolates were assessed for genetic variation. Strains isolated in this study are indicated with a square and named according to the sampling locality (CN: Chungnam), genotype, the number of the isolate and the year of isolation (shown as two digits). Only bootstrap values >70% are shown. Bar shows a genetic distance of 0.02 and 0.01, respectively. 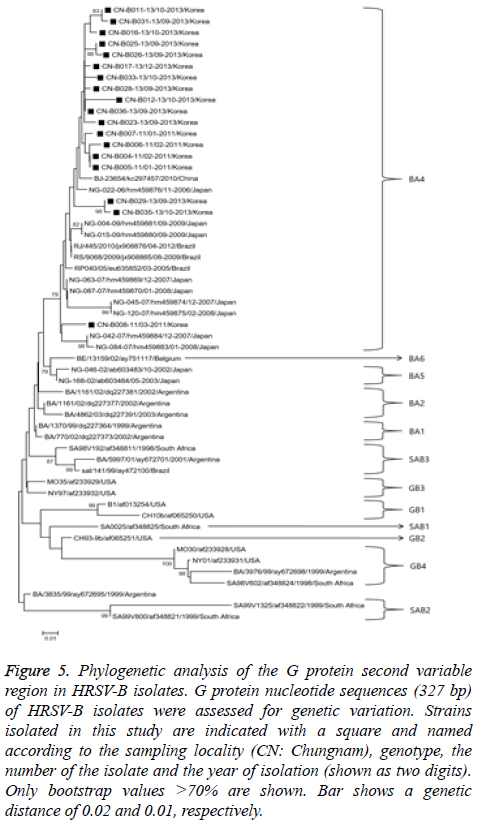 Figure 5: Phylogenetic analysis of the G protein second variable region in HRSV-B isolates. G protein nucleotide sequences (327 bp) of HRSV-B isolates were assessed for genetic variation. Strains isolated in this study are indicated with a square and named according to the sampling locality (CN: Chungnam), genotype, the number of the isolate and the year of isolation (shown as two digits). Only bootstrap values >70% are shown. Bar shows a genetic distance of 0.02 and 0.01, respectively.

The HRSV-B phylogenetic analysis used 327 bp G-protein nucleotide sequences from 18 randomly selected HRSV-B to construct a phylogenetic tree with sequences from 38 reference strains obtained from the GenBank database as shown in Figure 5. Strains were categorized into 12 distinct genetic groups, which were supported by high bootstrap values and previously reported clusters, including BA1-6 [16], GB1-4 [13], and SAB1-3 [14]. All 18 HRSV-B strains isolated in our study belonged to BA-4 genotype.

HRSV is a leading cause of acute respiratory syndrome among children and immunocompromised adults worldwide [17,18].Of patients presenting with acute respiratory symptoms, 8.75% were HRSV-positive, the majority of which were less than 3 years of age in this study. Similarly, HRSV infection incidence was reported to be 8.9% among hospitalized patients in Thailand [19], with an increased incidence in children less than 5 years of age [9]. Several previous studies demonstrate that HRSV-associated acute respiratory syndrome occurs mainly from late fall to winter season [9,20,21], consistent with our data. Moreover, 92 HRSV-positive patients were co-infected with additional respiratory viruses, including HRV, ADV, HBoV, HCoV, and PIV’s. Advances in diagnostic methods have increased the cases of co-detection, and its clinical significance should be interpreted cautiously [22]. Phylogenetic analysis of 47 selected HRSV-A isolates revealed their associations with the previously defined genotypes GA5, NA1, and ON1. The HRSV GA5 genotype include strains isolated in Europe, Uruguay, and USA in early 1990’s [23,24], and only one Korean isolate from our study showed phylogenetic similarity to this genotype (CNA013- 11/07-2011/Korea). NA1 genotype strains diverged from the GA2 genotype, leading to widespread HRSV-A outbreaks in Niigata, Japan, since 2006 [1] and in Chungnam, Korea, in 2011. Analysis of HRSV-A strains isolated in Ontario, Canada during winter 2010-2011 delineated separation of the ON1 genotype from NA1 as a result of a 72-nucleotide duplication in the G-protein C-terminus [15], and this genotype predominated in Chungnam from 2012 to 2014. HRSV may evolve with a distinct pattern determined by viral strain, host, and local characteristics. Particularly, HRSV-A strains with genetic replacement of the G protein were isolated in the same region through successive epidemics [25].

All 18 HRSV-B strains isolated in our study belonged to the BA4 genotype, which harbours 60-nucleotide duplication in the G-protein gene [26]. The BA1-6 genotypes were classified in genetic analysis of G-protein in HRSV-B isolates collected in Buenos Aires, Argentina, in 1999 [26]. BA4 strains have circulated worldwide since 2001 and display a high mutation rate [27,28]; thus, the rapid worldwide spread of the BA genotype may indicate a selective advantage over other circulating strains [29]. There were distinct lineages of the G protein among both subgroups A and B between geographic regions, and it suggested the positive immune selection in the same region [25].

Recently, it was reported for a vaccine study using HRSV G protein fragment in order to represent a candidate immunogen for HRSV vaccine [30]. The analysis of HRSV epidemiology and G-protein gene variability in the isolates from Chungnam, Korea revealed the patterns of genetic variation, and therefore it is believed that this research may be useful in the future development of vaccines and anti-viral therapies against HRSV infection.

This study was funded and technically supported by KCDC (Korea Centers for Disease Control and Prevention) and Kongju University.