Overactive bladder syndrome (OAB) is known to be a highly widespread disorder that increases with age in both sexes has negative effect on quality of life [1]. It was reported that approximately 6% of Chinese population suffer from OAB and other forms of incontinence [2].

According to the International Continence Society (ICS), OAB is a common disorder of bladder dysfunction, which is defined as urgency with or without urge incontinence, is usually with frequency and nocturia [3]. OAB is usually treated with nonpharmacologic methods such as lifestyle interventions (fluid restriction, avoidance of caffeine), bladder retraining and/or the pharmaceutical agents such as antimuscarinic drugs (e.g., darifenacin, hyoscyamine, oxybutynin) [4,5].

However, these treatments have proven effective only for some OAB symptoms. Behavioral treatments may not adequately relieve all bothersome symptoms [6]. In addition, pharmacological treatments are costly and have adverse side effects [7].

To date, the precise etiology of OAB remains poorly understood. OAB was reported to be associated with over activity of the urinary bladder detrusor muscle and increased contraction that originates from the urothelium and lamina propria [8]. Recently, environmental cues are reported to be related to OAB symptoms [9,10]. The cue that is most mentioned was upon arrival at an individual’s front door is defined as “latchkey incontinence”, which is a loss of urine that occurs when one arrives home and puts the key in the lock of one’s front door [9].

Environmental cues to urgency and incontinence episodes in Chinese patients with overactive bladder syndrome have not been reported. Therefore, in the current study, a pilot study is conducted by planning structured interview techniques to investigate the possible environmental cues associated with urinary urgency and urinary incontinence in Chinese patients with diagnosed OAB.

Seventy-six (76) OAB patients recruited in the pilot study were diagnosed and treated in the Second Affiliated Hospital of Wenzhou Medical University between January, 2013 and March, 2014. Inclusion Criteria included, to literate patients with OAB based on the subject’s score on the OAB Scale (OABSS) [12]. Participants were excluded if they had cognitive or other impairments that would interfere with completing the structured interview or refused to perform the study. This study was approved by the Institutional Review Board of The Second Affiliated Hospital of Wenzhou Medical University. Written informed consent was obtained from all participants.

All participants were interviewed at the urologist’s office before or after the patient’s scheduled appointment. Interview was conducted using semistructured questionnaire, including open- and closed-ended questions about environ-mental cues associated with urgency and incontinence. Patients were asked to respond to questions using a likert response rating scale: never, rarely, occasionally, often and always; which was coded from 1-5 for analysis. The frequency of OAB episodes to each of the cues was quantified. Interviews lasted between 7 and 26 minutes (mean 15 minutes). 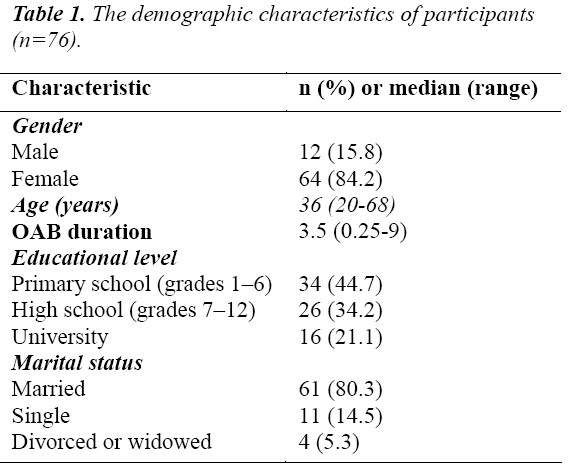 Results of our study indicate that patients diagnosed with OAB were associated with one or more environmental cues with urgency and incontinence. The most frequently reported were environmental cues associated with being on the way to a bathroom, getting up after waking in the morning, arrival home and opening the front door, arising from a lying-down position, seeing running water, thinking about going to the bathroom and in the bathroom for another reason besides urinating. These environmental cues either occur in OAB patients (at least 50%), or induce the episodes of urinary urgency and incontinence with high frequency (≥3.5). Therefore, the clinicians and patients should take into account of these cues and avoid them if conditions allowed.

Our results demonstrated that the environmental cues for OAB symptoms are those that occur in either temporal or spatial proximity to usual voiding situations. These findings support the hypothesis that Pavlovian conditioning may influence OAB symptoms. Pavlovian conditioning has been found to underlie an extensive range of responses, from drug tolerance to emotional reactions [13]. Pavlovian conditioning occurs in nearly all animal systems and is believed to help organisms to prepare for physiologically significant events such as eating or fleeing a threat [14]. For example, frequent concurrence of immediate urination with arriving home leads to a conditioned response of a strong urge to urinate and actual loss of urine upon arriving home. Our results also indicated a discrepancy between the urinary urgency and incontinence symptoms induced by environmental cues. Some cues (such as arrival home and opening the front door) were more associated with the symptom of urgency, while others (such as on the way to the washroom) may contribute to sphincter incontinence. However, these findings need to be investigated.

Animal study indicates that extinction of Pavlovian conditioning is possible [15]. Therefore, new methods on extinction of Pavlovian conditioning could be extended to the treatment of the episodes of OAB through stimulus control training. For example, OAB patients should consciously choose other activities when arriving at home, or unlinking of the arrival at home with voiding. Moreover, OAB patients should avoid these conditioned stimuli, such as thinking other things, or taking different routes to the bathroom. However, systematic, admitted and general protocols for extinction of bladder responses to cues have yet to be developed and this is our next research direction and goals.

There were several limitations in our study. First, the study sample was relative small and the results might limit the generalizability of the observations to the OAB patient population at large. Secondly, responses to environmental cues were dependent on the respondent’s memory, thus the respondents may not be aware of the cues that actually affected their urgency and incontinence episodes. Thirdly, the methods that we applied were self-design semistructured questionnaire. Although the interview included openand closed-ended questions, it did not include all the possible environmental cues that were associated with urgency and incontinence. Finally, the frequency of endorsement for urgency and incontinence by OAB patients could not be statistically analyzed to obtain statistical differences. The limitation of our study requires further investigation to collect data from a much larger and diverse number of samples. Future studies might also investigate recognition of environmental cues to urgency and incontinence, which might help people with OAB to recognize conditions of the environment that exacerbate their symptoms.

In conclusion, the findings of the current study demonstrate that one or more environmental cues may influence episodes of urinary urgency and incontinence in patients with OAB. Pavlovian conditioning plays a role in OAB symptoms. A combination of behavioral treatments targeting environmental cues and Pavlovian extinction treatments might be effective in treating OAB.