Enhancement of Growth In Maize By Biogenic- Synthesized Mgo Nanoparticles

Nanotechnology application is now widely distributed throughout life, and especially in agricultural systems. Nanoparticles, because of their physicochemical characteristics, are among the potential candidates for modulating the redox status and changing the seed germination, growth, performance, and quality of plants (Adams, 2006). The numerous studies have reported the effects of NPs on seed germination and crops improvement. However, most of the experiments have been done under controlled conditions. Both carbon based ENPs and metal and metal-oxide ENPs have been the subject of these studies. Such carbon nanomaterials (such as Singlewalled carbon nanotubes (SWCNTs), multi-walled carbon nanotube (MWCNTs), carbon bucky balls, etc.) are finding application in seed germination and agriculture and food packaging. This has raised questions regarding the safety of using such ENPs in agriculture. Conflicting evidences are available regarding the effect of ENPs on crops (Aoshima, 2009). Studies indicate that carbon nanotubes (CNTs) penetrated tomato seeds and dramatically enhanced their germination percentage and growth parameters (Aruoja, 2009). They suggested that the CNTs were able to easily penetrate the thick seed coat and support water uptake inside seeds, a process which can enhance seed germination and growth of tomato seedlings. (Brar, 2010) Few other studies also support the positive effects of suspensions of MWCNTs on seed germination and root growth of six different crop species [radish (Raphanus sativus), rape (Brassica napus), rye grass (Lolium perenne), lettuce (Lactuca sativa), corn (Zea mays) and cucumber (Cucumis sativus)]. TiO2 NPs have been found to improve light absorbance and promote the activity of Rubisco activase thus accelerating spinach growth (Canas, 2008). TiO2 NP (anatase) also improved plant growth by enhanced nitrogen metabolism (Colvin, 2003) that promotes the absorption of nitrate in spinach an accelerating conversion of inorganic nitrogen into organic nitrogen, thereby increasing efficiency of plant fresh weights and dry weights (DeRosa, 2010). In this experiment studies on maize growth parameters, germination percentage and chlorophyll content treated with biological synthesized MgO nanoparticles.

In this green synthesis method MgO nanoparticles are prepared. It is simple, fast and environment friendly method. 0.05 M of Magnesium acetate were used as the precursor material and mixed with 50 ml distilled water under vigorous stir for 30 minutes. For this solution 25 ml of prepared betel leaf extract used as a reducing agent and was added under stirring for 30 min. Then the mixed solution was placed on hot plate for 4 hours at 110°C then collected sample crushed into powder using mortar and pestle. The dried precursor then was calcinated at 400°C.

The metal oxide nanoparticles were suspended directly in Millipore water and dispersed by ultrasonic vibration (250W, 20 kHz) for 30 minutes using the Ultrasonic. The nanoparticles concentration of 50, 100 and 150 mg.L-1 suspensions were prepared (Table 1).

Table 1: Characteristics of the experimental soil.

The seeds were checked for their viability by suspending them in double distilled water. The seeds which are settled to the bottom were selected for further study. The seeds were rinsed in double distilled water thrice and then surface sterilization of seeds was done. The biological synthesized MgO nanoparticles were sonicated for 30 minutes. The nanoparticles, then add the sterilized seeds in prepared nanoparticle suspensions (0.0, 50, 100 150 mg/L-1) using a sonicator instrument. The soaked seeds were put in prepared pots and observe of the growth.

The counts were taken as per the ISTA rules (1993) and expressed in percentage.

The seedling vigor index was determined by using the formula.

where D is the crystal size, k is the shape factor, which usually takes a value of about 0.9, λ is the wavelength of X-ray source used, β is the full width at half-maximum (FWHM), and θ is the Bragg diffraction angle. The average particle size of MgO calcined at 400°C was measured to be 22 nm. 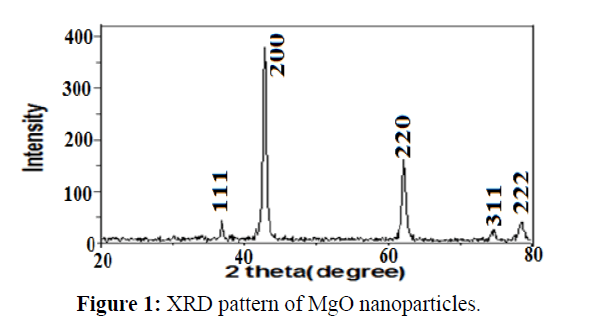 From Figure 2 displays the FTIR curve of MgO NPs. The absorption bands in the range of 3418.6 cm−1 are due to the stretching mode of –OH vibration. The absorption band at 1636.8 cm−1 is due to bending vibration mode of physisorbed water. The intense peaks at 1458.2 cm−1 are associated with vibrational mode of H− ion bonded to Mg2+ on different co-ordination sites. The bands in between 649.5-561.1 cm−1 are due to MgO vibrations. 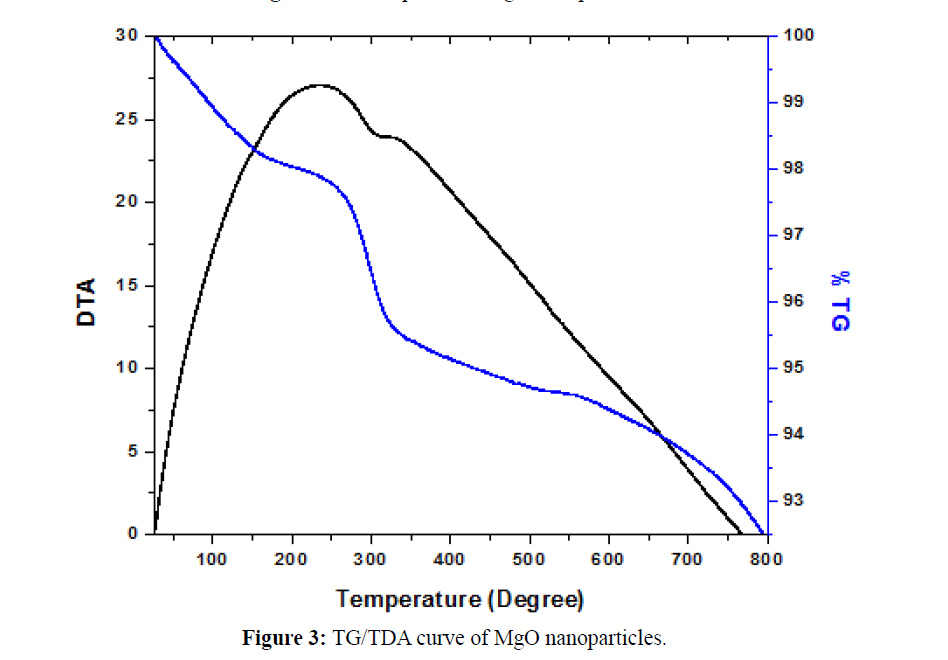 The analysis of the scanning electron microscopy (SEM) images predicts the formation and the morphology of stable MgO nanoparticles obtained from the current green approach. The MgO NPs are mainly uniform agglomeration with the average range of particle size distribution is 2 μm (Figures: 6-10). 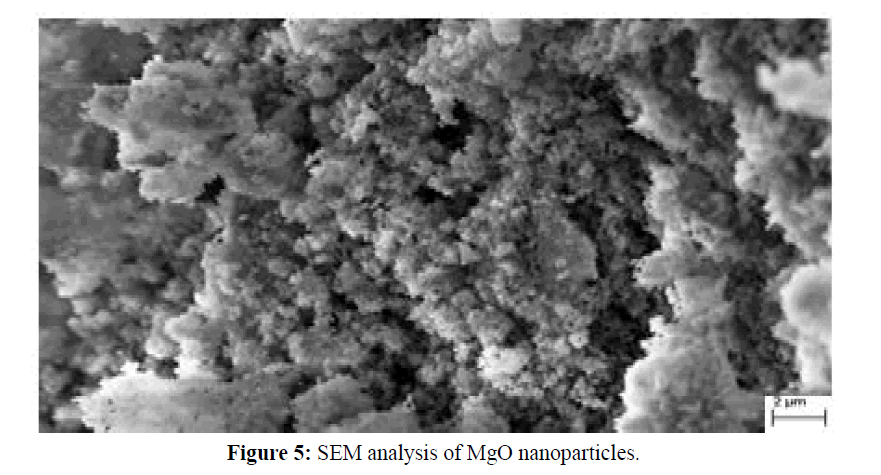 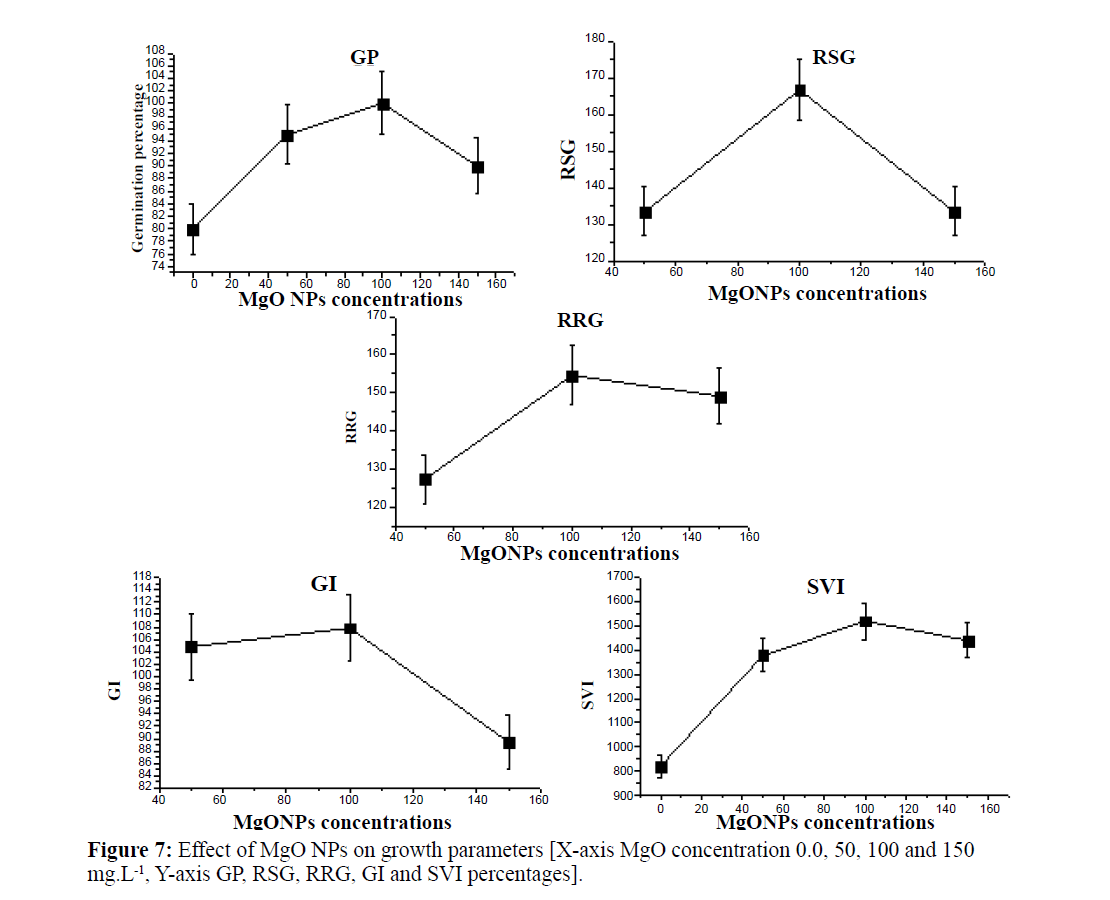 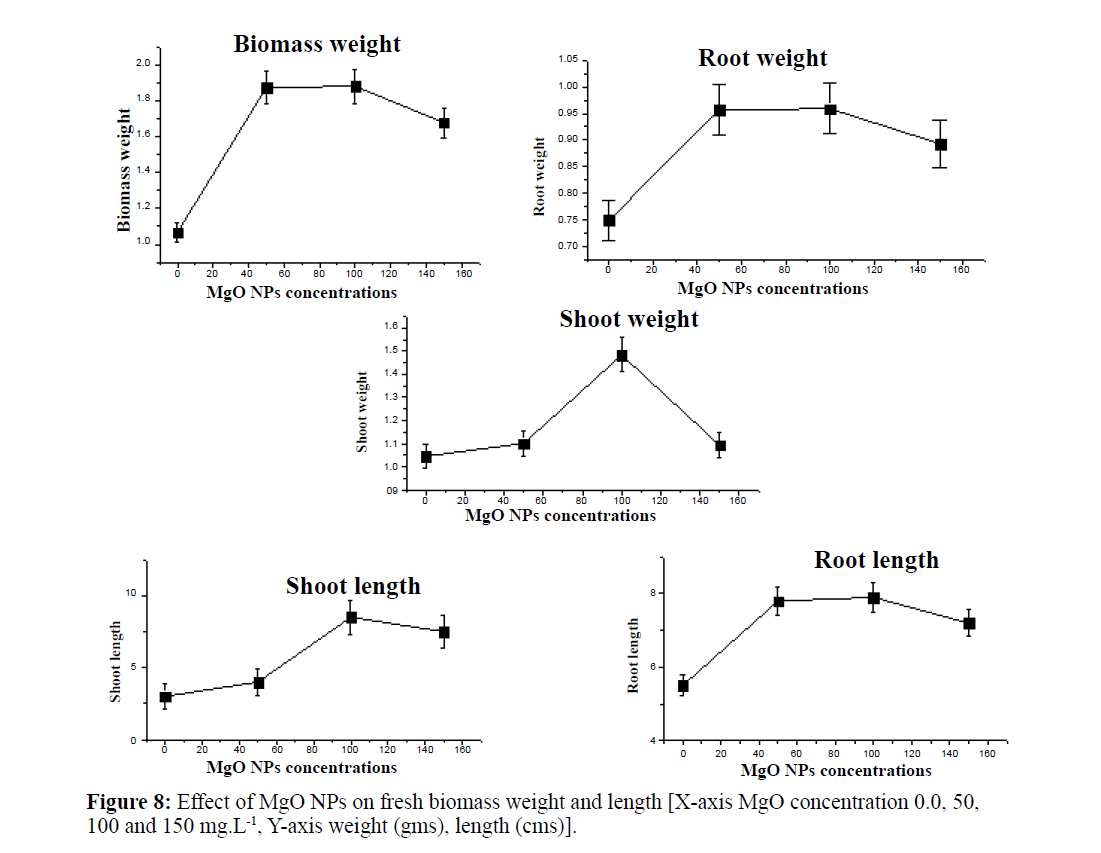 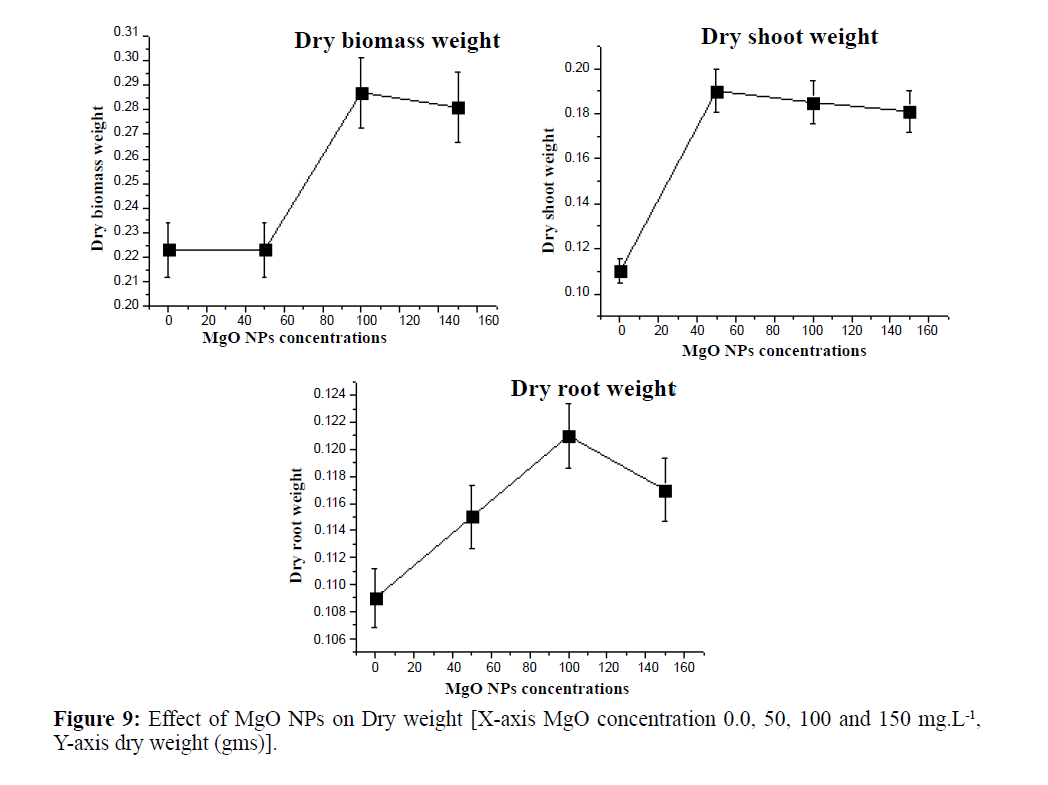 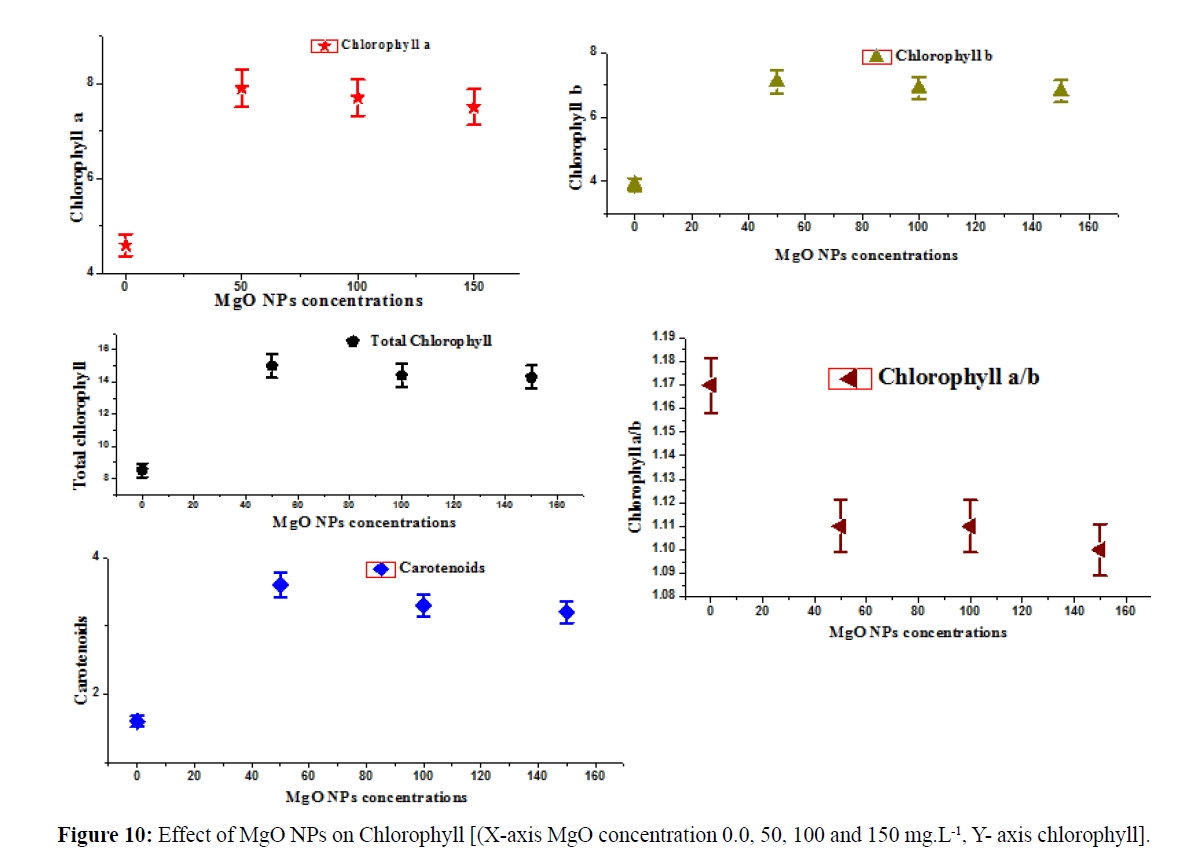 The present study clearly indicates that MgO nanoaprticles could be synthesized by a simple aqueous biogenic method using pure aqueous route resulting in primary particle sizes of 22 nm. In our current experiment, application of MgO stimulated the seed germination of maize. However, this response was dependent on the concentration of applied MgO on maize seed germination. In maize plant, results showed that the highest and the lowest GP (95% and 80%), were obtained in 100 mg concentration of nano-sized MgO and control, respectively (Ma, 2010). Our findings possibly revealed the use of nano-MgO (15-25 nm in diameter) increased the seed germination parameters of maize seeds. Results of germination test on plants indicated that the final GP was significantly affected by the employed treatment, however, increasing the concentration of nanosized MgO up to 150 mg caused an increase in seed germination and after that it declined. However, the maximum seedling SVI (1440) was observed in concentration (100 mg).

The calculation carry our for fresh biomass analysis, before plant harvested after plant harvested. The whole plant along with leaves, shoot and root fresh weight was measured. For dry weight, the plant were dried in oven at 80°C weight was recorded. Biologically synthesized MgO nanoparticles effect on maize biomass when increase the concentrations increase the biomass of the maize plant (Zhu, 2008; Kurepa, 2010; Saha, 1990; Lu, 2002). The biogenic MgO nanoaprticles effect on biomass production of the maize plants. 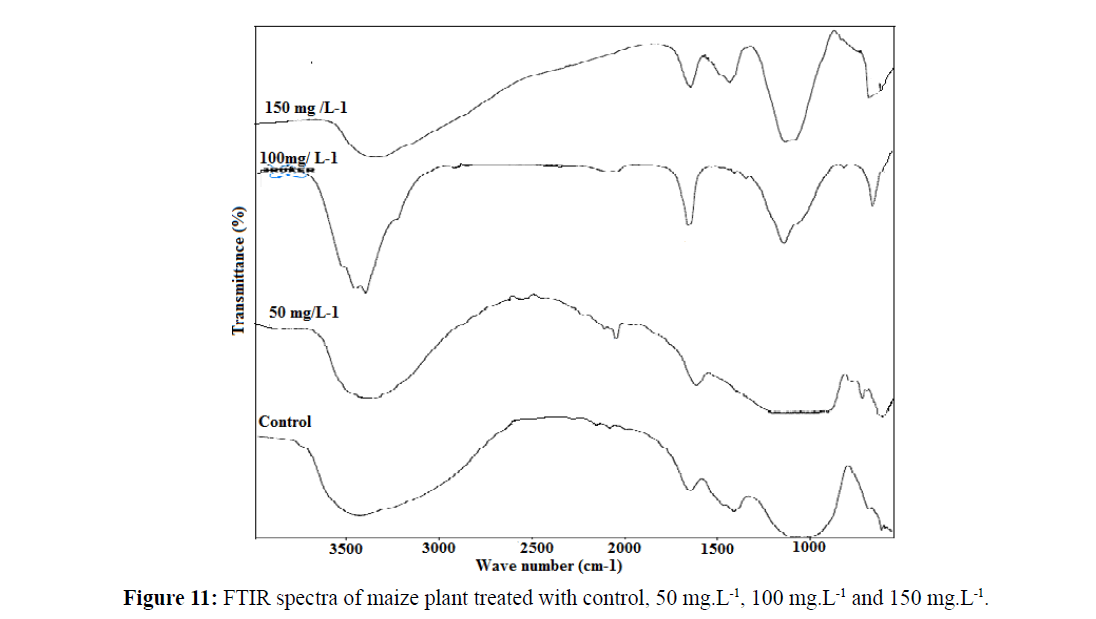 The maize plants were dried in oven (75°C) these dried plant material then grounded fine powder for FTIR analysis. It is clear from the spectra that the bonds appeared in sharp stretching bonds presence 100 mg.L-1 and 150 mg.L- 1 concentration MgO NPs treated maize plants whereas compare to 50 mg.L-1 and control. The band at 850 to 1190 cm-1 associated with C=O stretching vibration indicating the possible involvement of C=O within the plant body and indicate the carbohydrate formation. The observed that the band areas at 1650 to 1750 cm-1 amide region. The sharp stretching bond presence in only 100 mg.L-1 concentration treated maize plant whereas compare to other treatments and control. The sharp stretching bond appeared at 3000 to 3500 cm-1 (in 100 mg.L-1 concentration treated maize plant) due to absorbed water and lipids content. From this result we can also conclude that as major part of the nano MgO is utilized by the maize plants (Figure 12). 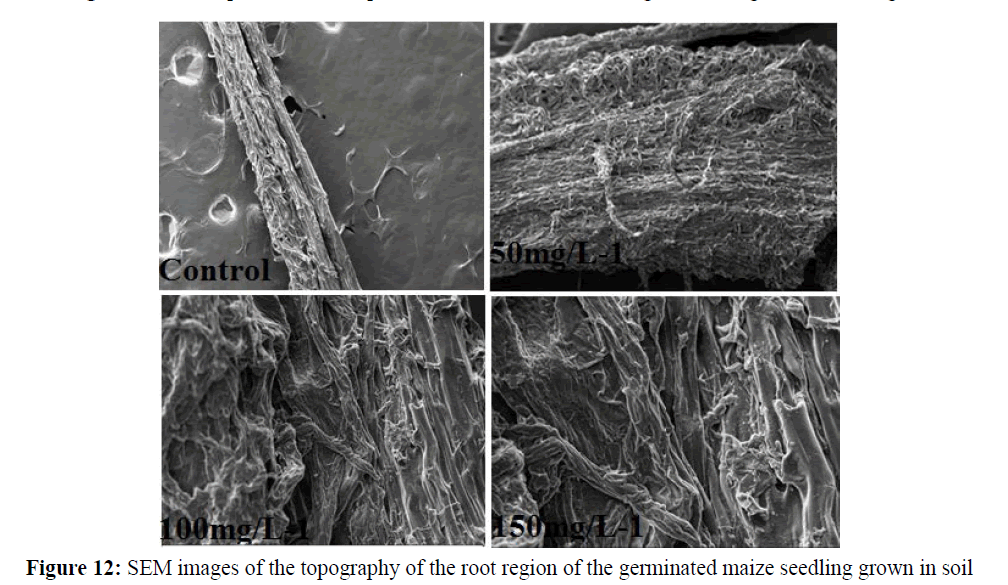 Figure 12: SEM images of the topography of the root region of the germinated maize seedling grown in soil

In this study the nanoparticles is present in a plant cell is analysis by SEM. the maize plant samples of the roots were placed in 3.5% glutaraldehyde solution. This may have led to more accumulation of MgO nanoaprticles in the roots and then transport to shoots (stem and leaves). In this experiment uptake of MgO nanoaprticles at different concentrations of 50 mg.L-1, 100 mg.L-1 and 150 mg.L-1 was found to be significant, with few white dots appearing root surface of the maize plants.

Magnesium oxide nanoparticles were successfully produced using bio-combustion method. The XRD and FTIR analysis confirmed the complete transformation of MgO nanoparticles after calcinations. In this study we have observed beneficial role of nano- MgO NPs in seed germination and plant growth regulation in maize. The possible reason for such beneficial role is the increase in activity of growth hormones. The nanoparticles size play important role in the behavior, reactivity and effect of nanoparticles was observed on growth parameters of maize. Overall, the present study demonstrates possible adverse effect of metal oxide nanomaterials on plants. MgO NPs penetrates easily inside the plant cells and causes effects on plant biomass and chlorophyll content. Results clearly demonstrate the greater improvement in biomass shoot-root growth and photosynthetic pigment (chlorophyll) by the application of biologically synthesized MgO nanoparticle at 50 mg.L-1 and 100 mg.L- 1 concentrations on 20 days plants.

My special thanks to University Grants Commission for providing the financial support. 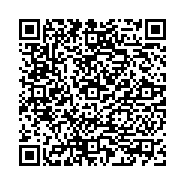