We present a novel technique of portal venous stenting performed via a combined transhepatic and transjugular approach in a 63 year old lady admitted to our hospital with hematemesis. A CT scan showed gastro-esophageal varices and occlusion of the right main intrahepatic portal vein branch. Endoscopic treatment of the varices proved unsuccessful in controlling her haematemesis. A dual approach involving transhepatic access for portography and initial predilatation followed by transjugular access for balloon catheter angioplasty and placement of a Wallstent was employed. Portal flow was successfully restored with no complications related to the procedure. A 6-month and 1-year Ultrasound follow-up scan showed stent patency and hepatopetal flow with deflation of varices. To our knowledge this is the first reported case of a combined transhepatic and transjugular approach for the treatment of portal venous occlusion.

Portal vein steno-occlusion is one of the main causes of portal hypertension. It can be classified as post-hepatic, hepatic, or prehepatic according to its location. The condition can occur as a result of liver cirrhosis, coagulopathies, complicated abdominal infections postoperative strictures, and/or pancreatic disease of either neoplastic or inflammatory origin [1,2].

A large portal vein diameter can require the use of a large diameter stent for treatment. The use of a large sheath via trans-hepatic access could, however, increase the risk of significant hemorrhage [3,4]. Alternatively, stenting via transjugular access can also be difficult because fluoroscopic and/or ultrasound imaging (US) may not accurately predict where the stenosis is precisely located and/or because a narrow stenosis or an occlusion may present an unfavorable angle from which one can negotiate a guidewire through the occlusion.

In this paper we present a case involving the stenting of a large diameter right intrahepatic portal vein branch occlusion which was performed with combined transhepatic and transjugular access.

A 63-year-old woman was admitted with life threatening massive hematemesis and recurrent melena. The patient had undergone a pancreaticoduodenectomy 11 years previously for the treatment of an Ampulla of Vater adenocarcinoma. Laboratory tests demonstrated a low hemoglobin value (7.5 g/dl) and confirmed her known thrombocytopenia (60000 platelets per microliter), due to an already reported myelodysplastic syndrome, as well as high transaminase levels (GPT 110 U/dl, GOT 150 U/dl). The CEA (0.3 ng/dl) and CA 19-9 (22 U/dl) levels were in the normal range. A multi detector computed tomography scan (MDCT) following admission showed a 13 mm diameter intrahepatic right intrahepatic portal vein branch which was occluded close to the intrahepatic confluence. Several gastro-esophageal varicose veins (Figure 1a) and cavernous transformation of the left intrahepatic portal vein branch (Figure 1b) was also noted. 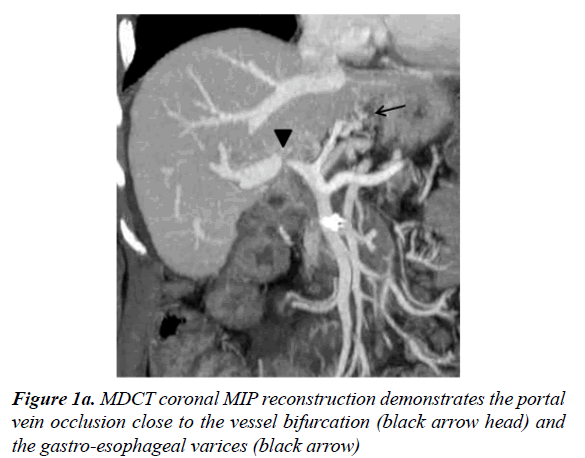 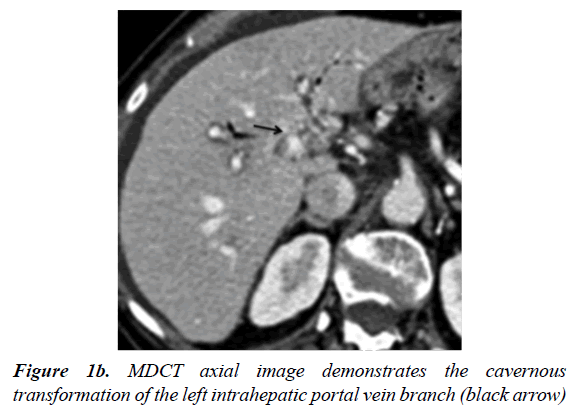 The patient underwent an emergency endoscopy, with F3 grade ligature of the esophageal varices and cyanoacrylate obliteration of her gastric varices. Despite endoscopic therapy the patient presented with another significant hematemesis episode three days later. As a consequence of her recurrent bleeding a multidisciplinary decision was made to recanalize the portal vein to reduce her portal venous hypertension.

In view of the location of the occlusion seen on CT and the patients coagulopathy it was felt that the best way to place a stent from the right hepatic main branch to the portal common trunk was using a dual access technique. Trans-hepatic access using a Neff Percutaneous Access Set (Cook Medical, Bloomington, USA) was performed via a peripheral portal vein branch in segment VI and a 5 F sheath (Terumo Corporation, Tokyo, Japan) was placed. Following this, intrahepatic portography was performed, confirming the right portal vein branch occlusion (Figure 2a). 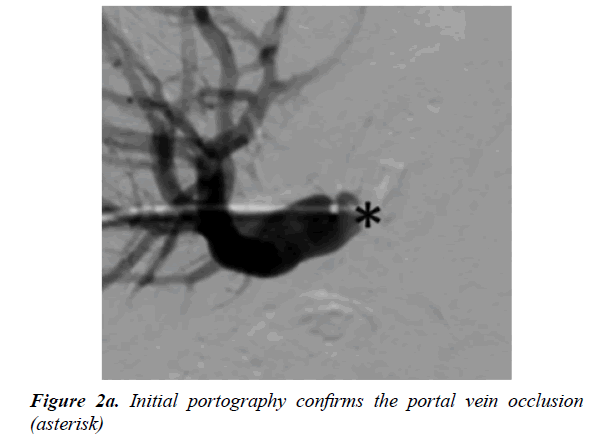 The occlusion was eventually passed with a hydrophilic guidewire and a 5 F angled hydrophilic catheter (Terumo Corporation, Tokyo, Japan). The pre and post-stenotic pressure gradient was measured as 21 mmHg. After the I.V. administration of a bolus of heparin (3500 UI), the hydrophilic guidewire was replaced with a stiff guidewire (Amplatz Super Stiff; Boston Corporation, Miami, USA) and percutaneous transluminal angioplasty (PTA) with a 6 mm × 40 mm balloon (FoxCross 0.35 PTA Catheter; Abbott Vascular, Abbott Parrk, Illinois, USA) was performed. A venogram subsequently performed demonstrated the esophageal varices and hepatofugal steal through the coronary vein (Figure 2b). 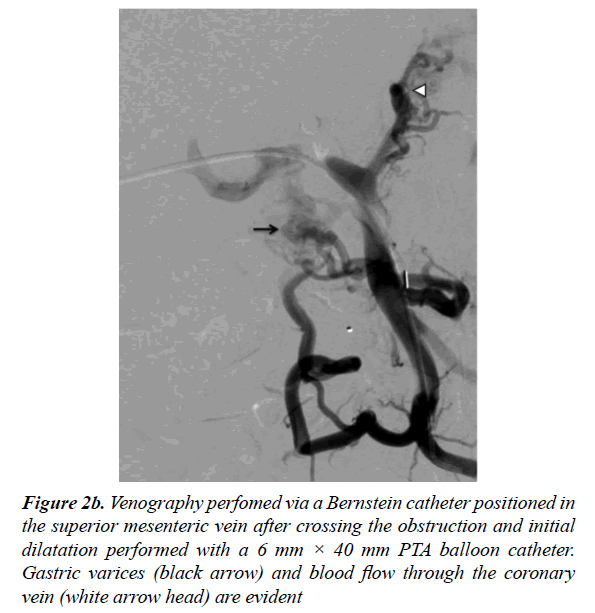 Figure 2b: Venography perfomed via a Bernstein catheter positioned in the superior mesenteric vein after crossing the obstruction and initial dilatation performed with a 6 mm × 40 mm PTA balloon catheter. Gastric varices (black arrow) and blood flow through the coronary vein (white arrow head) are evident 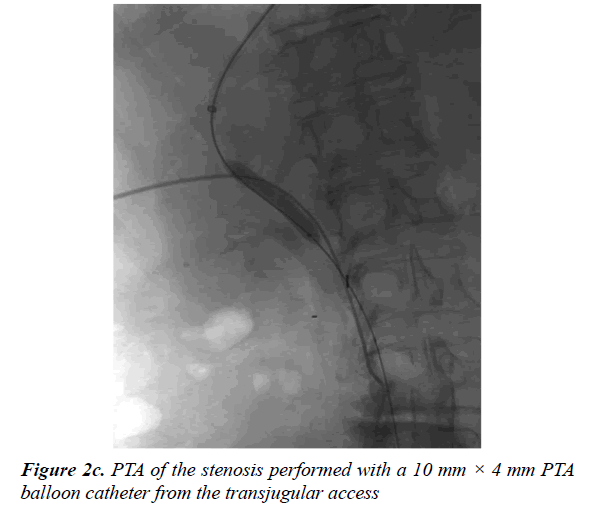 Figure 2c: PTA of the stenosis performed with a 10 mm × 4 mm PTA balloon catheter from the transjugular access 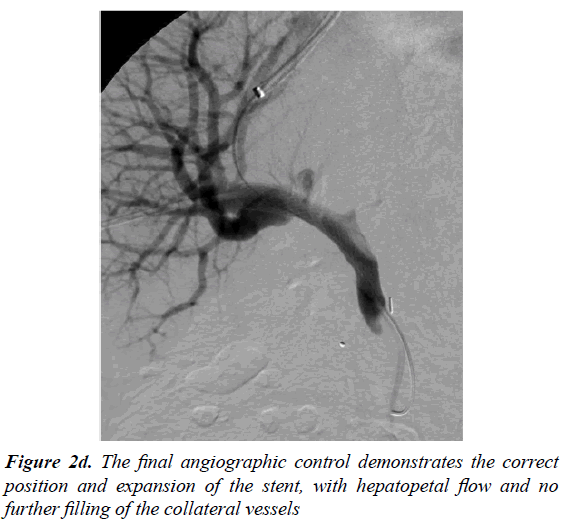 Figure 2d: The final angiographic control demonstrates the correct position and expansion of the stent, with hepatopetal flow and no further filling of the collateral vessels

Finally, a Wallstent (Boston Corporation, Miami, USA), 16 mm diameter × 60 mm length was positioned in the previously occluded tract. A final control venogram demonstrated the correct position and adequate expansion of the stent, with hepatopetal contrast flow and no further filling of the collateral vessels (Figure 2d). The value of the post-procedure portosystemic gradient was 11 mmHg. A fibrin absorbable gelatin sponge was used to close the intra-hepatic tract created by the 5 Fr percutaneous accesses. There were no complications related to the procedure. Life-long anti-platelet therapy was prescribed (Acetylsalicylic Acid (Cardio Aspirin 100; Bayer HealthCare AG, Leverkusen, Germany). Follow up imaging at one, three, six and twelve months with Color-Doppler US was arranged. All of these examinations showed wide stent patency with no intimal hyperplasia and disappearance of the collateral vessels (Figure 3). The patient remains clinically well with no further episodes of hematemesis. 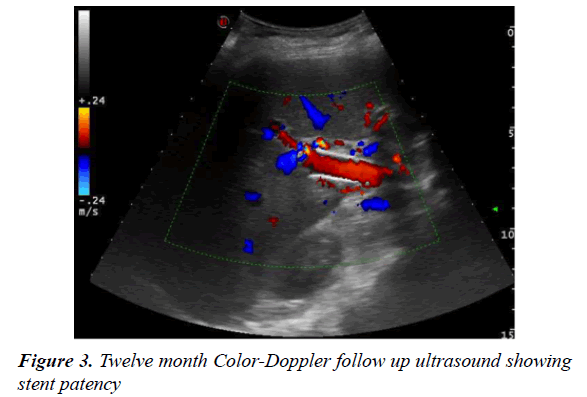 Portal vein obstruction is one of the main causes of portal hypertension [1,2]. The patient in this case presented with onset of symptoms 11 years after a pancreaticoduodenectomy for the treatment of an Ampulla of Vater Carcinoma which caused a progressive, initially asymptomatic, fibrotic postoperative stenosis. Following this surgical procedure portal vein stenosis is often caused by recurrent tumor growth [5]. In our patient the MDCT and laboratory tests did not show evidence of malignancy re-occurrence.

Endoscopic therapy with esophageal variceal ligation and gastrical variceal obliteration is the first-line treatment for varices with acute bleeding [6]. Failure of her initial endoscopic varices treatment coupled with the finding of portal vein occlusion on the MDCT led to the requirement of a more definitive treatment for her portal hypertension. Because of the previous abdominal intervention, stent implantation instead of surgical treatment was preferred as the first line of treatment due to its minimally invasive ability to decompress the portal hypertension whilst preserving portal blood flow and consequently stopping bleeding from pathological collateral vessels [7].

A single transhepatic access would not have been suitable in our thrombocytopenic patient in view of the potential high risk of postoperative bleeding expected given the 10F sheath required to place a 16 mm diameter stent suitable for her ectatic portal vein (13 mm) [3,4]. A single tranjugular access would also not have been suitable because of the very unfavorable angle one would encounter in trying to pass the obstruction located close to the entry into the main portal vein. It was, therefore, decided to use a 5F transhepatic access for portography to confirm the MDCT findings and give a more direct access route to cross the occlusion and perform a preliminary PTA; once a metallic guidewire was through the obstruction it also provided a good fluoroscopic landmark for the portal vein puncture from the hepatic vein and 10Fr transjugular access could then be utilized to deliver the stent. Stent placement instead of PTA alone was considered the best option because of the highly fibrotic stenosis the patient had presented with.

Our first reported case of dual transhepatic and transjugular approach proved successful and safe and should be considered in all cases where stenting of a highly stenotic or occluded large diameter intrahepatic portal vein is needed - especially in patients with an associated thrombocytopenia or other coagulation disorders.