Objective: In this study, we aimed to investigate the relationship between ischemic cerebrovascular diseases and Lys198Asn and rs10478694 polymorphism of Endothelin-1 gene, a strong vasoconstrictor.

Conclusion: Lys198Asn and rs10478694 polymorphism of Endothelin-1 gene was found not to be correlated with ischemic cerebrovascular diseases.

Cerebrovascular Diseases (CeVD) constitute about 10% of all emergency room admissions and vast majority of emergency room admissions with a neurological disease [1]. Age, gender, race, arterial hypertension, diabetes, Cardiovascular Diseases (CVD), hyperlipidaemia, smoking, alcohol, obesity, genetic predisposition, carotid or vertebral artery stenosis are important risk factors for ischemic cerebrovascular diseases [2]. The studies on risk factors, chemicals and genetic effects that have effect on development of CeVD are underway. Endothelin-1 is one of these substances.

Endothelins (ET), found in very small concentrations in the circulation, are 21-amino acid most potent vasoconstrictor polypeptides that are produced primarily in endothelium of vascular smooth muscle and that exert paracrine and autocrine effects [3]. They show a heterogeneous distribution in the central nervous system (CNS). While Endothelin-1 (ET-1) and 3 are found in neuronal tissue, ET-1 is more in the brain stem and endothelin-3 is more in the pituitary gland. Although the role of ETs is not known with certainty in brain, these are contemplated to be partially involved in the regulation of local cerebral blood flow and be neuropeptides [4]. Endothelin 1 levels in the blood and cerebrospinal fluid have been reported to be elevated in cerebrovascular diseases [5]. Genetic factors playing an important role in the development of CeVD lead to an increase in genetic studies that are aimed to detect susceptibility to this disease before the onset of disease [6,7]. Among the genetic studies, potential endothelial gene polymorphisms are also included. Many phenotypes were studied to examine the relationship between polymorphisms in ET Type A (ETa) (-231G>A, +122C>T) and ET Type B (ETb) receptor (G57S and L277L) in ET-1 gene (EDN1) (K198N) [8].

Two nucleotide polymorphisms in Endothelin-1 gene (EDN1) have been reported to be associated with blood pressure. The first of these is Lys198Asn polymorphism, which is known to play a role in development of hypertension and affect vascular reactivity [9-12]. The other one is rs10478694 polymorphism, which increases levels of ET-1, causes a significant imbalance in vascular tone and further triggers serious endothelial dysfunction [13-15].

We aimed to investigate phenotypic implications of Lys198Asn and rs10478694, which are found on endothelin-1 gene, in patients diagnosed with ischemic CeVD in the emergency department.

In our study, 100 patients with ischemic CeVD diagnosis and 100 control subjects without a known history of CeVD, acute renal failure and acute coronary syndrome were included. Accompanying haemorrhagic cerebrovascular disease, traumatic brain injury, acute renal failure or acute coronary syndromes were considered as exclusion criteria. In addition, those under 18 years of age and those who did not consent were excluded. The demographic data of patients were recorded into the standard data form. The local ethics committee approval was obtained for this study.

Two cc of venous blood samples were obtained from both study groups into Ethylenediaminetetraacetic acid (EDTA) tubes. Bloods were kept at -80ºC for approximately 7 days until DNA purification and tubes were studied after homogenization.

Statistical Package for the Social Sciences (SPSS 21, Chicago, IL, USA) program was used for analysis of the data. Compliance of genetic distribution with Hardy-Weinberg equilibrium was analysed by X2 goodness-of-fit test. Differences of genotypic and allele distributions between patients and controls were evaluated with chi-square test. Results were evaluated with 95% confidence interval and significance was at p <0.05 level. 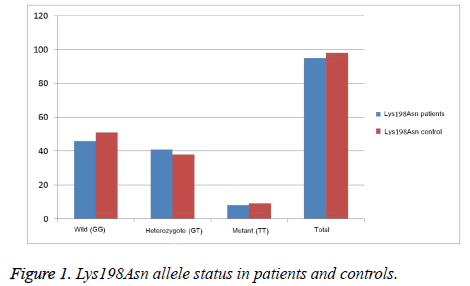 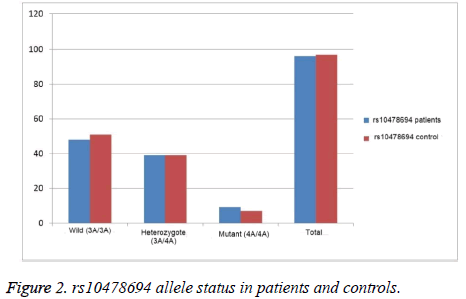 Acute ischemic stroke is a heterogeneous disease that occurs due to several pathophysiological mechanisms. Endothelial dysfunction plays an important role in the development of CeVD. Therefore, genes that control endothelial function become important for the development of disease [16]. ET-1, produced by vascular endothelial cells, is a strong vasoconstrictor and vasopressor substance, which plays a critical role in vasoconstriction [17]. Due to being released from the damaged endothelial area and having proliferative effect on vascular smooth muscle cell, ET-1 plays an important role in vascular dysfunction in pathological conditions such as atherosclerosis, hypertension and leading cardiac hypertrophy, post-angioplasty restenosis and scleroderma [5]. In myocardial infarction, which is another disease associated with atherosclerosis and hypertension, synthesis and release of ET increase in proportion to the size and extent of infarct [18].

Endothelin-1 is considered to trigger development of CeVD and assist vascular cell growth with two receptor subtypes [19]. High-ET-1 levels have been associated with carotid atherosclerosis and asymptomatic cerebrovascular lesions [20]. Therefore, it is considered that ET-1 plays an important role in the etiology of hypertension and atherosclerosis [21].

When hypertension and atherosclerosis are considered to be major predisposing factors in the development of cerebrovascular disease, it shows that ET-1 is one of the factors that causes the development of ischemic CeVD. ET-1 plays an important role in the etiology of vasospasm developing after subarachnoid haemorrhage [22,23]. ET-1 levels in focal and global ischemia was first researched by Barone et al. [24] They measured Endothelin tissue and extracellular levels of Endothelin in ischemic rat brains and found that ET-1 levels in the ischemic cortex is significantly higher than that of nonischemic cortex 24 hours after long-term occlusion of middle cerebral artery. Levels were also found similarly high 24 hours after eighty minutes of transient occlusion and following reperfusion. Again, Estrada et al. [25] have measured the levels of plasma ET-1 in 37 patients with acute ischemic stroke and found that ET-1 levels at the immediate onset of symptoms in patients are increased approximately two-fold compared to healthy controls. The authors also reported that this increase remained high during the 7-day follow-up period.

Up-to-date evidences emphasize the importance of genetic factors as well as environmental factors [6,7]. Many phenotypes were investigated to examine the relationship between CeVD and potential endothelial genes. So far polymorphisms at ET Type A (ETa) (-231G>A, +122C>T) and ET Type B (ETb) receptor (G57S and L277L) in ET-1 gene (EDN1) (K198N) were investigated. No polymorphism or association between haplotype and CeVD was found in 300 CeVD patients [8].

In our study, we believe that ET-1 polymorphism in cerebrovascular patients is not a risk factor for CeVD and that ET-1 polymorphism does not play a role in the pathogenesis of CeVD. However, as there is plurality of different mechanisms regulating the effects of ET-1, it is understood that release of ET-1 is due to causes other than genetic factors.

In this study, we aimed to investigate the relationship between ischemic cerebrovascular diseases and Lys198Asn and rs10478694 polymorphism of Endothelin-1 gene, a strong vasoconstrictor. Haven’t been studied the data of ET 1 serum levels of patients in the study and the detection for mRNA , haven't been added the data of the affecting the CeVD etiology like environmental affects, HT, including vital signs, such as atherosclerosis are limitations of our study.