Here we report a 95-years-old woman presenting with a chronic history of frequent cough, dysphagia for solids and later difficulty in swallowing fluids along with decreased appetite and weight loss from 6 months ago who diagnosed with large Zenker diverticula. According to the patient’s age and general condition, the surgeon consultation considered her as inoperable so an endoscopic diverticulectomy performed as a therapeutic option by using flexible endoscope under deep sedation and the patient discharged from hospital 5 days after procedure.

Traditionally surgical resection has been the optimal treatment of esophageal (Zenker) diverticula over the past century [1]. Developments in minimally invasive surgery and new endoscopic devices have led to a paradigm change. Nowadays, Zenker’s Diverticulum can be treated by flexible endoscopy as a quick and safe technique.

A 95-years-old woman presenting with a chronic history of frequent cough, dysphagia for solids and later difficulty in swallowing fluids along with decreased appetite and weight loss from 6 months ago. The primary diagnosis was food impaction and the upper gastrointestinal endoscopy was performed for several times while oesophageal lumen was not visible and couple of endoscopists reported esophagus as blind loop full of food remnants [2].

We supposed these reposts compatible with diverticula. A barium swallow requested, but the patient was so disabled and unable to do it. So at first the food remnant exsect by a basket, then after several attempts (Figures 1 and 2). 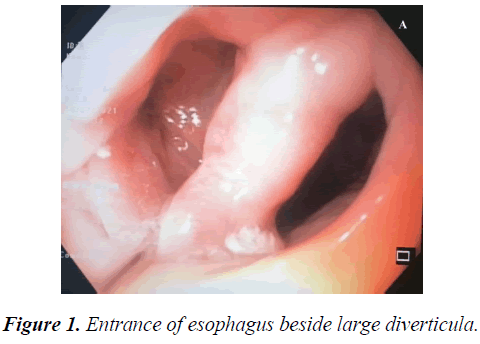 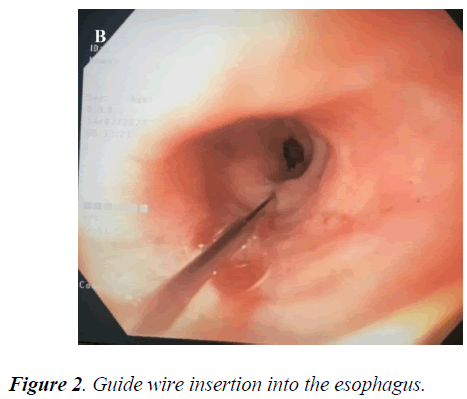 According to the patient’s age and general condition, the surgeon consultation considered her as inoperable and offered a surgical gastrostomy. So an endoscopic diverticulectomy planed as a therapeutic option for the management of patient’s problem (Figures 3 and 4). 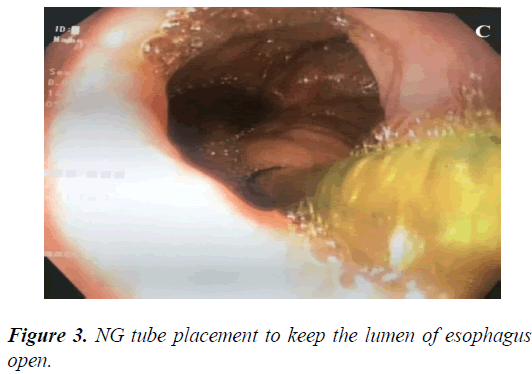 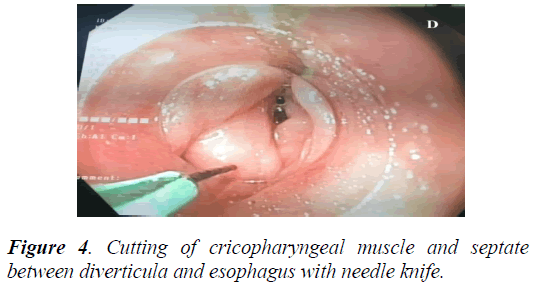 Figure 4: Cutting of cricopharyngeal muscle and septate between diverticula and esophagus with needle knife.

The 4 hemoclips deployed in the site of diverticulectomy and hemostasis achieved (Figure 5). Both the procedure and the postoperative course were free of complications. The patient kept NPO for 72 h then she permitted to swallow water and the day after, she start to eat. 5 days after procedure, she discharged with improvement of general condition [3]. 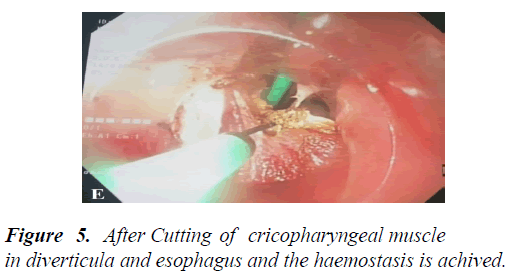 Figure 5: Cutting of cricopharyngeal muscle and septate between diverticula and esophagus with needle knife.

Zenker’s diverticulum (ZD) as a rare condition usually manifests in seventh or eighth decade of life and diagnose with gastroscopy and barium swallow study which is useful in defining the size and dimensions of the diverticulum [4]. Over the last decades, Endoscopic treatment of symptomatic ZD has been established as a safe and effective treatment option with fewer morbidities as compared to surgery. Endoscopic methods include rigid and flexible endoscopic division of septum. The rigid transoral approach requires the placement of a rigid diverticuloscope and division of the cricopharyngeal septum by using knife or a stapling device [4]. The major limitations of rigid endoscopy include requirement of general anesthesia and relative contraindication in those with limited cervical spine mobility. For the same reason, flexible endoscopy increasingly being preferred over rigid endoscopy techniques endoscopic procedure requires a high definition flexible endoscope, electrosurgical knife, coagulation forceps, guidewire, and nasogastric tube. The use of diverticuloscope for stabilization of the septum is optional and depends on the operator’s experiance. The division of cricopharyngeal septum is performed by an electrosurgical knife. Different knives include needle knife, hook knife, scissor type knives, and triangular knife, among them, needle knife and hook knife are the most commonly utilized.

The procedure can be performed under deep sedation using propofol. The steps include cleansing of the diverticulum of all the food debris then insertion of a NG tube to keep the esophageal lumen open. Then the septum cut by using a needle knife and after division of the muscle fibers at the bottom of the septum, one or more endoclips would place at the base of the cut end of septum to prevent bleeding or perforation. The success rate of this procedure is about 80 to 90% with rare complications including bleeding or perforation [5]. Based on our knowledge, our case was the first endoscopic diverticulectomy in south west of Iran and an inoperable patient because of extreme old age, discharged form hospital with a good condition and able to eat and drink 5 days after the procedure. Individuals who have gentle, brief assaults and who will attempt long haul dietary changes might have the option to stay away from medical procedure. In the event that you have numerous assaults of diverticulitis, medical procedure might be suitable.

The careful treatment, called inside resection, includes eliminating the unhealthy piece of the digestive organ (incomplete colectomy) and reconnecting the leftover parts. Contingent upon the seriousness and nature of the side effects, more than one medical procedure might be expected to address the issue. At the point when different medical procedures are required, the individual generally has a colostomy during the time between medical procedures. A colostomy is a surgery wherein the upper piece of the digestive tract is sewn to an opening made in the skin of the mid-region. The Stool drops of the body at this opening and into a dispensable pack. Generally the colostomy is taken out sometime in the not too distant future and the digestive tract is reconnected.

Generally, less than 6 out of 100 individuals who have diverticulitis need a medical procedure. You might choose to have a medical procedure for diverticulitis on the off chance that you have: Rehashed assaults. Medical procedure to eliminate the unhealthy piece of the colon frequently is suggested on the off chance that you have at least two serious assaults. A high danger of rehashed attack (for example,in individuals more youthful than age 40 or individuals with an impeded insusceptible framework). A strange opening (fistula) that has shaped between the colon and a nearby organ, most normally the bladder, uterus, or vagina [5].

A tainted pocket (diverticulum) that has burst into the stomach cavity, particularly if a pocket of contamination (ulcer) has framed. A disease that has spread into the stomach depression (peritonitis). A hindered colon (inside deterrent) or a restricted spot in the colon (stricture). Infection that has spread through the blood to different pieces of the body (sepsis). The Rehashed issues with draining or extreme draining that doesn't stop with different medicines.

At times of diverticulitis, a pocket of disease (ulcer) in the midsection mends all alone. At different occasions it very well may be depleted without a medical procedure. A needle is gone through the skin into the sore, and the fluid containing the disease is depleted. A registered tomography (CT) filter is utilized to help the specialist guide the needle into the sore. Now and then a plastic channel is set briefly in the midsection to deplete the ulcer. Endoscopic diverticulectomy is a safe and practical option for management of Zenker Diverticulum especially among those who have several co-morbities and are high risk for surgery.