Background: In Gabon, studies on molecular epidemiology of malaria are mainly confined to urban and hospital settings; contrasting with rural areas where data are scarce, especially on asymptomatic P. falciparum infection. In this study, the polymorphism of P. falciparum multidrug resistance -1 gene (Pfmdr1) was investigated for the first time in P. falciparum specimens from asymptomatic individuals living in Dienga, a rural area in southeastern Gabon.

Conclusion: Data from Dienga showed moderate variations in the distribution of Pfmdr1 genotypes and a high haplotype diversity suggesting the low ACT drug pressure on parasites in this locality.

Malaria still caused 429 000 (235 000–639 000) deaths around the world; from which 78% occurred in sub-Saharan Africa [1]. This infection can unpredictably progress to severe forms such as severe anemia and cerebral malaria which are responsible for almost all the morbidity and mortality related to the disease [2- 5]. The emergence of antimalarial drug-resistance is one of the causes of this disease’s persistence.

In 2000, the Roll Back malaria initiative has permitted to the international community to intensify the measures to fight malaria. As a result, a marked decline of mortality and morbidity due to malaria was observed. This achievement is owed to a rise in investments for vector control such as the use of Insecticide Treated Bed Nets (ITNs), and treatment including Intermittent Preventive Treatment during pregnancy (IPTp) and combined therapies, especially Artemisinin-Based Combined Therapies (ACTs) against uncomplicated malaria [6-8]. However, these successes are threatened by the emergence of parasite resistance against artemisinin [9-11]. Moreover, this resistance was firmly established in Cambodia, Thailand, Vietnam and Burma and its possible spread over the rest of South-east Asia has been documented [12,13]. On the other hand, the therapeutic failures of ACTs could be associated with single nucleotide polymorphism (SNP) in P. falciparum multidrug resistance gene-1 (Pfmdr1) [14,13], as well as with K13 propeller [15,16]. Pfmdr1 is an ATP cassette protein located on the parasite’s food vacuole. Indeed, the mutations in this gene reduce the parasite’s sensitivity to anti-malarial drugs [17]. The therapeutic failures following ACTs treatments were associated with the selection of N86, 184F and D1246 (NFD genotype), in the Pfmdr1 gene [18]. The NFD haplotype was also involved in the decrease of Artemether-Lumefantrine (AL) sensibility. Also, N86, Y184 and D1246 (NYD), might be implicated in the failure of the Amodiaquine treatment (Amodiaquine is used in combination with Artesunate). Furthermore, an increase of asexual parasites and gametocytes harboring the Pfmdr1 NFD haplotype in patients treated with AL was linked with treatment failure [19].

In Gabon, located in West-Central Africa, an equatorial climate prevails. Seasonality is characterized by two rainy seasons and two dry seasons. Malaria transmission is perennial and the resistance to CQ, amodiaquine and sulfadoxine-pyrimethamine is widespread [20-23]. In 2003, in line with WHO recommendations, the National Malaria Control Program adopted the ACT strategy to treat uncomplicated malarial spraying, instead of CQ and other monotherapies. The ACTs most widely used in Gabon are artemether-lumefantrine (AL) and artesunate-amodiaquine (AS-AQ). Consequently, the prevalence of malaria among febrile children fell from 30% to 13% between 2004 and 2008, the mean age of children with malaria rose from 24 to 41 months [21,7]. Later, in 2013, several studies demonstrated the rise of malaria in urban areas of the country (Libreville, Oyem and Franceville) [24,25]. In addition, an increased prevalence of the Pfmdr1 86N genotype of P. falciparum from symptomatic individuals was observed in Franceville [26], confirming previous data from Oyem (North of Gabon) [27]. All these previous studies were conducted in urban hospitals and were mainly performed on symptomatic individuals By contrast; little is known about malaria epidemiology in rural areas.

Dienga is a village located in the south-east of Gabon near the Congo border which counts almost 3,000 inhabitants.

The aim of this study was to determine the prevalence of polymorphisms in Pfmdr1 gene associated with parasites resistance to antimalarials of P. falciparum isolated from asymptomatic individuals of Dienga.

Dienga is a densely forested rural area, situated near the Congo border, with around 3,000 inhabitants. As in most parts of the country, malaria is highly endemic and P. falciparum is predominantly due to Anopheles gambiae (80%), with an entomological infection rate of 100 infective bites per human per year [28]. Malaria seasonal peaks of transmission coincide with the rains, from February to June and from September to December [28].

This study was approved by the National Ethics Committee of Gabon and registered under number (N°0018/2013/SG/CNE). Written informed consent was obtained from participants, parents or legal guardians upon enrollment in the study.

From April 2013 to June 2014, through six field missions, a cohort composed of 370 indiduals was followed to investigate P. falciparum infection [29]. The participants were composed of volunteers permanently living in Dienga; primary school children (≥ 3 years) and adults. Following physical examination, the auxiliary temperature and history of fever (≥ 37.5°C) in the previous 24 hours for all participants were recorded. Blood samples were collected by venipuncture in 5-ml EDTA tubes during the first mission (April 2013), the fifth (March 2014) and the last (June 2014). P. falciparum infection was diagnosed during each mission using microscopy and PCR (STEVOR gene) to detect microscopic (MI) and submicroscopic infections (SMI) respectively.

Statistical analysis was performed using STATA 14.0 (Texas 77845 USA, 4905 Lakeway Drive College Station). The Chi-square test was used to compare categorical variables among groups. The non-parametric K-wallis, Pearson’s and Fisher’s exact tests were used for group comparisons, as appropriate. First, a descriptive analysis was done for the study population. Then, univariate analysis was achieved to investigate the link between Pfmdr1 alleles and both microscopic and submicroscopic infections. In all statistical tests, significance was assumed at p<0.05.

Distribution of PfMDR1 polymorphism over the study period 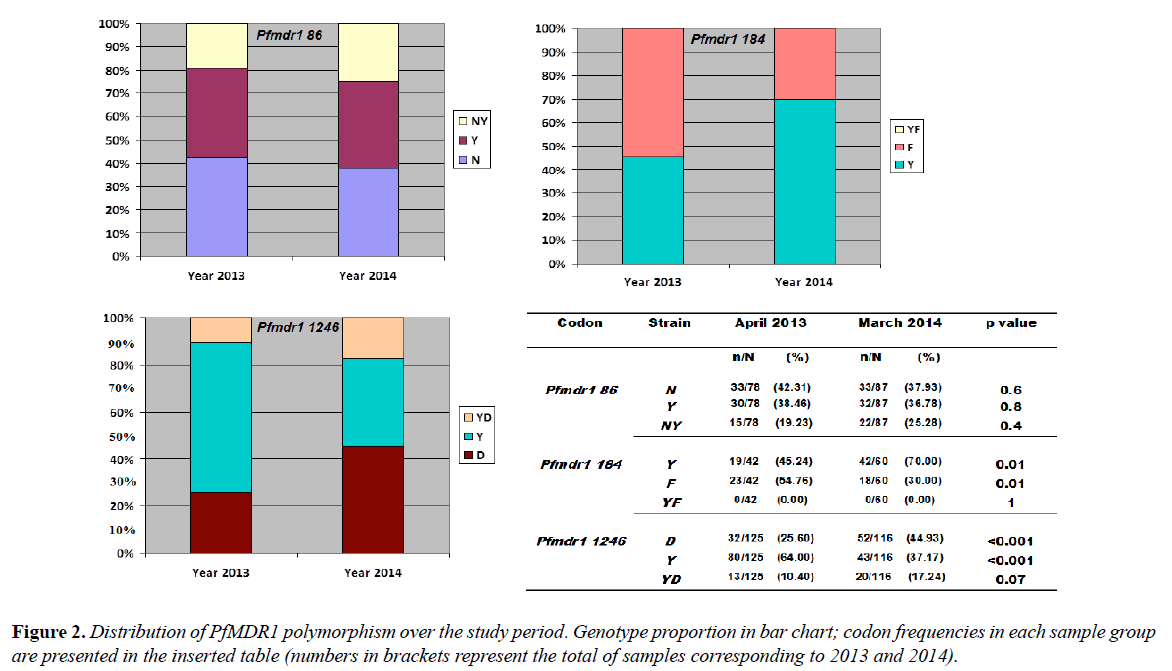 Figure 2. Distribution of PfMDR1 polymorphism over the study period. Genotype proportion in bar chart; codon frequencies in each sample group are presented in the inserted table (numbers in brackets represent the total of samples corresponding to 2013 and 2014).

Figure 3. Haplotypes: Circular diagram representing the proportions of each haplotype (2013 on the left and 2014 on the right). The same color is used for a haplotype over the two study periods.

Figure 4. Haplotype in MI and SMI.

Haplotypes in MI and SMI

Table 3. Analyses of associations between haplotypes and either submicroscopic or microscopic infections in 2014

NFD was the sole haplotype which tended to be associated with MI parasites (Table 3). In 2014, the analysis of this association gave the same results.

In Dienga, the prevalence of P. falciparum infection decreased around 2003 [30] but a decade after this prevalence rose markedly [29]. This situation may be associated with a lack of ongoing efforts to fight against the disease (ie local anti-malarial drug use, prevention measures). A surveillance of molecular markers of drug resistance, in parasites from asymptomatic individuals, a hidden reservoir, is particularly important to improve malaria control strategies. In sub-Saharan African countries, the monitoring of malaria and anti-malarial drug resistance in rural areas is unusual, as most data are commonly reported from urban areas in Gabon [24,26], in Zanzibar [31], Cameroon [32], Senegal [33] and Mozambique [34].

Two decades ago, chloroquine (CQ) and sulfadoxine pyrimethamine (SP) were the most widespread anti-malarial drugs used in Gabon. Because of the lack of the efficacy of CQ and SP to treat malaria they were replaced by ACT in 2005 by the Gabonese Malaria National Control Program (MNCP) which launched a nationwide campaign of ITNs distribution, intermittent preventive treatment (IPT), and educational messages. The use of artesunate-amodiaquine (AS-AQ), and artemether-lumefantrine (AL) were therefore recommended in treatment of uncomplicated malaria.

The aim of the current study was to investigate the baseline of polymorphisms in the resistance-associated genes Pfmdr1 of parasites collected from asymptomatic individuals of Dienga, considering both microscopic and submicroscopic infections. To our knowledge it is the first study to analyze Pfmdr1 or other gene polymorphism of P. falciparum from non-febrile individuals in a rural area of Gabon.

In this study, codon 1246 of Pfmdr1 was the most efficiently genotyped (94.7%) in 2013 and (86.57%) in 2014 compared to other codons (or alleles). This could be due to either the low parasite density as most of the isolates were submicroscopic and from asymptomatic individuals, or to the variability of P. falciparum field isolates. This result could also be due to the sensitivity of the 1246 primers which may be more sensitive than those of codons 86 and 184 even when the amounts of DNA are low. This result is similar to that observed in Franceville by a team that investigated the Pfmdr1 gene polymorphism [35]. Like Dienga, the city of Franceville is also located in the south-east of Gabon and their similar epidemiological contexts could explain this similarity.

The increase of genotype N86 has been associated with a decreased susceptibility to artemisinins in vitro [36,37]. Our results did not confirm the study of Lekana-Douki et al, which reports a rise in the prevalence of genotype N86 in Franceville after the use of AS-AQ [24] and a study conducted in Mozambique [38].

A moderate level of the mutated genotype 86Y observed in this study may be associated with CQ resistance; even Pfcrt locus has been not investigated. Moreover, in a study performed in Uganda, it has been documented that genotype 86Y was more important in asymptomatic carriers compared to febrile ones [36]. It has been previously documented that Pfmdr1 86Y and 1246Y mutations decrease chloroquine and amodiaquine sensitivity, but they increase lumefantrine, mefloquine and dihydroartemisin sensitivity according to Pickard [13,40,36,41].

All eight Pfmdr1 haplotypes (codons 86, 184 and 1246) were found at diverse levels, in P. falciparum isolates from Dienga, both in 2013 and 2014. This finding suggests that the high diversity in rural areas may be due to the low drug pressure, contrasting with urban areas of Sudan where only two haplotypes have been found [42]. Interestingly, the prevalence of the NFD haplotype, strongly involved in the decrease of AL sensitivity, was one of the lower haplotypes in the study and that could indicate a small consumption of AL in Dienga. Nonetheless, this result contrasted with data from six cities in Tanzania, where NFD was one of the most common haplotypes encountered after AL treatment [43].

The YYD haplotype significantly increased in 2014, in contrast to Kenya and Tanzania where a decrease of Lumefantrine susceptibility was reported followed by increase of the prevalence of NFD, NYD, YYY and YYD [44,36]. A rise of YYD in 2014 was observed and is consistent with the work of Morris U et al. who reported that YYD is the most prevalent haplotype in asymptomatic malaria infection [45].

In Dienga, P. falciparum from asymptomatic individuals showed moderate variations in the distribution of Pfmdr1 alleles despite the fact that it carried all the Pfmdr1 haplotypes. Likewise, the low prevalence of most of these haplotypes may suggest a limited ACT drug pressure.

We thank Dr R.F Kassa Kassa and J Ondzanga for their help as physicians. We are grateful to the individuals and their families who accepted to participate in this study, and to the staff of the CIRMF in Dienga, especially Helene Tiga and Suzan Moundemba. We also express our gratitude to Justice Mayombo, Lewobo Ludjer, Omnella Mavoungou, Ingrid Ontsia and Dr Mpiga-Mickoto. Finally, we thank the staff of the Centre International de Recherches Médicales de Franceville (CIRMF), for their help in the lab tests, particularly Jeanne Lahonko and Dr Statiana-Mbouyi.