To investigate the protective effect of Emblica Total Phenolic Acids (ETPA) on acute liver injury in mice and its possible mechanism. Mouse model of acute liver injury was established, which was induced by Acetaminophen (APAP). The mice were divided into normal group, model group and ETPA groups (15, 30 and 60 mg•kg-1). UV-Vis spectrophotometry was used to detect serum Alanine Aminotransferase (ALT) and Aspartate Amino Transferase (AST) activities of various groups, as well as Superoxide Dismutase (SOD) and Malonaldehyde (MDA) levels in liver homogenates. HE staining was performed to observe the pathological changes in liver. Compared to the model group, intragastric administration of ETPA (30 and 60 mg•kg-1) could significantly decrease the elevated activities of ALT and AST in serum. ETPA was also found to decrease the elevated MDA and SOD levels in liver homogenates. ETPA could significantly improve the degree and extent of hepatocellular necrosis and reduce inflammatory cell infiltration. ETPA has a protective effect on APAP-induced acute liver injury in mice, and relevant mechanism may be associated with its anti-oxidation effect.

Liver injury is a disease of liver dysfunction caused by a variety of pathogenic factors including viral infection, radiation injury, excessive intake of ethanol and food additives, toxic food intake, etc. [1]. Clinically, liver injury is manifested primarily as apparent medical history within 72 h, abnormal elevation of liver function indices in short-term, jaundice, etc. [2]. Acute liver injury is the initial link and common pathway for occurrence and development of multiple liver diseases, as well as for eventual liver failure [3]. At present, acute liver injury is generally considered a reversible disease, but there is no desirable drug yet clinically. Extensive studies have shown that natural medicine and traditional Chinese medicine have reliable efficacy and small adverse reactions in the treatment of acute liver injury. In recent years, the incidence of druginduced liver injury has been rising with the continuous introduction of new drugs. According to domestic and foreign reports, more than 1,000 kinds of drugs can cause druginduced liver injury [4,5]. Chinese medicine Yuganzi is the dried ripe fruits of Phyllanthus emblica L. in the genus Phyllanthus of the family Euphorbiaceae. Emblica enters the lung and stomach meridians, which is sweet, acid, astringent and cool. With heat-clearing, blood-cooling, digestionpromoting, stomach-invigorating, saliva-producing and coughsuppressing functions, it is clinically used for the treatment of blood heat, blood stasis, indigestion, abdominal distension, cough, sore throat, dry mouth, etc. [6]. Active constituents of emblica are polyphenols, which are classified into flavonoids and phenolic acids [7-11]. Emblica has a significant protective effect on DNA damage. Besides, the existing literature has proved that it has a strong anti-oxidation effect. As a promising antioxidant regulator, emblica is worth further verification and development [12-14]. Furthermore, research has shown that ETPA has a definite efficacy for liver cancer, but its inhibitory role in liver injury has never been reported as far as the authors know. This paper studies the protective effect of ETPA on APAP-induced liver injury by establishing a mouse model of APAP-induced acute liver injury.

Male SPF Kunming mice, weighing 18-22 g, aged 5-6 w, with a certification No. of SCXK (Wan) 2011-002, were provided by the Laboratory Animal Center of Anhui Medical University. The mice were adaptively fed for 3 d, then fed and watered ad libitum. Alternate 12 h periods of light and darkness were maintained daily. Temperature was maintained between 20-25°C, while relative humidity was (45-65%). This study was approved by the Laboratory Animal Center and Ethics Committee of Anhui Medical University.

The animals were randomly divided into 6 groups: normal control group, model group, ETPA groups (15, 30 and 60 mg•kg-1) and positive control group (Bif, 150 mg•kg-1) (n=8 in each group). Mice were intragastrically administered corresponding dosage (0.2 ml/10 g) of ETPA or Bif daily. The normal and model groups were intragastrically administered an equal volume of 0.9% NaCl solution. On d 8, all mice were fasted for 10 h after the last administration. APAP (300 mg•kg-1) was given by intraperitoneal injection, while the normal group was intraperitoneally injected an equal volume of 0.9% NaCl solution. After an additional 12 h of fasting, blood samples were taken from the orbital venous plexus and centrifuged at 3000 r•min-1 for 20 min (4°C), then supernatant was aspirated for biochemical marker detection. The mice were sacrificed by cervical dislocation, and the same parts of livers were taken for the determination of MDA and SOD levels, while the remaining livers were fixed in 10% formaldehyde for histopathological examination.

The activities of ALT and AST in serum were determined by Reitman-Frankel method as per the kit instructions.

Liver tissues of mice were added to the homogenizer according to tissue: 0.9% NaCl solution (1:9) and ground on ice to prepare into 10% liver homogenates, followed by operation according to the kit instructions.

The mice were killed after taking blood, the quality of liver, spleen and thymus was weighed. Liver index, spleen index and thymus index were calculated by m/g unit.

Left liver lobe tissues were fixed in 10% formaldehyde, dehydrated with ethanol, cleared in xylene, embedded in paraffin, serially sectioned at 5 μm and routinely stained with HE. After mounting with neutral resin, liver histopathological changes were observed under light microscope.

The experimental data were analysed using SPSS 17.0 statistical software. Intergroup comparison was performed by one-way ANOVA, while pairwise comparison was done by Dunnet's test. The results were expressed as x̄ ± s.

Effects of ETPA on liver, spleen and thymus indices of mice with APAP-induced acute liver injury

Compared to the normal group, the liver and spleen indices of mice in the APAP model group were all markedly increased, while the thymus index showed no obvious changes. Compared to the model group, ETPA (60 mg•kg-1) and Bif (150 mg•kg-1) could both markedly reduce the APAP-induced elevated liver index of mice (Table 3).

HE staining revealed that the hepatic lobules in liver tissues of normal mice had clear structure, and the liver cords were arranged orderly from the central veins to the surroundings. Comparatively, APAP model mice exhibited abnormal hepatic lobular structure, disorderly liver cord structure, and obvious interstitial infiltration of inflammatory cells. ETPA (15, 30 and 60 mg•kg-1) and Bif (150 mg•kg-1) could all markedly attenuate the APAP-induced inflammatory cell infiltration and hepatic cord disturbance (Figure 1). 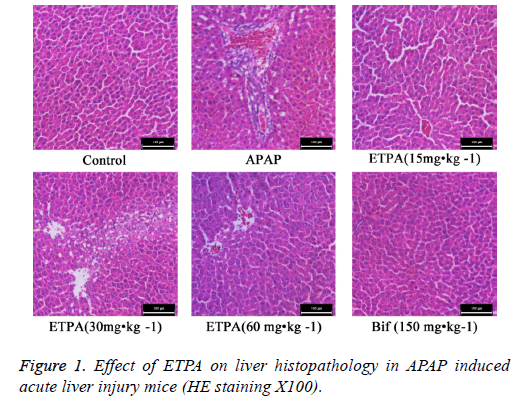 Liver, as the main organ for detoxifying drugs and toxins, is highly vulnerable to the effects of harmful factors to cause liver injury [15]. Liver injury is a recoverable disease. In the early stage of liver injury, the damaged liver cells can regain normal function through drug therapy. But if the treatment is not timely, the damaged liver cells will not recover and may develop into liver fibrosis, liver cirrhosis and even liver cancer. Therefore, the researches on pathogenesis of liver injury and drug intervention effect are of great significance to the prevention and treatment of chronic liver diseases. ETPA is a kind of glycosides with multiple pharmacological activities including anti-oxidative and anti-free radical formation effects, which is isolated from the dried ripe fruits of Phyllanthus emblica L. In this paper, the protective effect of ETPA on APAP mice is investigated through mouse model of APAPinduced acute liver injury.

APAP-induced mouse acute liver injury model is a commonly used animal model of liver injury at present, which is an ideal model for screening hepatoprotective drugs with its fast modeling, easy replication and good stability [16]. After entering the body, 90% of APAP bonds with sulfate and glucuronic acid under the catalysis of sulfotransferase and UDP-glucuronosyltransferase to form non-toxic substances and are discharged from the urine. Approximately 5% of APAP, which is not involved in biotransformation, is excreted from the initial urine in the original form. The remaining is metabolized by the cytochrome P450 enzyme system (mainly CYP1A2 and CYP2E1) in the hepatocyte endoplasmic reticulum. In the presence of NADPH, APAP can be transformed into hepatotoxic substance N-acetyl-pbenzoquinone imine (NAPQI), and GSH can bond with it to relieve adverse liver reactions. When APAP is overdosed, a large amount of sulfotransferase and UDPglucuronosyltransferase are consumed, which leads to excessive concentration of NAPQI in hepatocytes to bond with enzymatic and non-enzymatic systems in the liver, thereby forming hepatotoxic products to result in hepatocellular injury [17]. Meanwhile, substantial free radicals are produced in the mouse body to cause lipid peroxidation, which leads to decreased SOD activity and increased MDA production [18]. It has been reported that during acute liver injury, liver cell membrane permeability increases to result in substantial release of ALT, AST and marked elevation of blood AST, ALT levels [19]. The increase of free radicals and the consumption of antioxidant enzymes can cause oxidative stress reaction, thereby inducing liver injury. Therefore, the blood ALT, AST levels and liver homogenate SOD, MDA activities are important indicators for evaluating the severity of liver injury. In the present study, we examined the effects of ETPA on the ALT, AST levels in blood and the SOD and MDA activities in liver tissues of mice. The results showed that ETPA significantly decreased AST and ALT levels, increased SOD activity in liver homogenates, and decreased MDA level. Liver pathology also revealed that the degree and extent of hepatocellular necrosis and inflammatory cell infiltration were all markedly reduced compared to the model group. This suggests that ETPA can improve APAP-induced oxidative damage of hepatocytes to a certain extent.

In conclusion, ETPA has a certain protective effect on APAPinduced liver injury, and relevant mechanism may be associated with reduced free radical production and increased activity of antioxidant enzymes.